Leaving bouquets and trading tales of their own crashes and close calls, the city’s bicycle community today rolled up in a steady stream to the spot in North Baltimore where 41-year-old Thomas Palermo was struck and killed by a motorist yesterday, many of them puzzling over how the collision could have occurred in such a seemingly bike-friendly spot.

“I always feel so safe when I get there,” said Katie Gore, of Joe’s Bike Shop in Mount Washington, after laying bunches of flowers at the stone wall that was fast becoming a memorial to Palermo.

The stretch of Roland Avenue where the incident occurred, near the Bellemore Road intersection, is wide – with two traffic lanes and a bike lane in each direction and a grassy median between them. The road surface is relatively smooth and there is no road reconstruction taking place here, as there is further south on Roland.

But in a way, that’s the harsh message of this most recent bicyclist fatality, said Gore’s husband Joe Traill: that cyclists’ safety depends on something even tougher to fix than laws and bike infrastructure – motorists’ behavior. 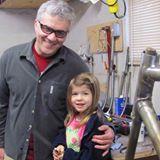 “If everyone was riding the speed limit, it shouldn’t matter the condition of the roadway,” Traill said, his face red with emotion.

“It’s the same message we’ve always had, we just have to say it louder,” Traill said.

Gore explained that their shop in Mount Washington is nearby on Falls Road (right down hilly Bellemore) and that the initial report of an unnamed 41-year-old male cyclist struck a particular chill when she heard it yesterday: “that describes a large number of our customers.”

According to Baltimore Police spokesman Det. Jeremy Silbert, “officers were called to the 5700 block of Roland Avenue for a report of a car accident” that took place at about 2:37 pm Saturday.

When police arrived, Palermo was still alive and was taken to Sinai Hospital, where he died from his injuries.

The motorist, meanwhile, had fled the scene and returned only after she was reportedly chased down by other cyclists. Police described the driver as a 58-year-old woman who had been heading south on Roland Avenue. They said the decision about whether to charge her would be made after consulting with the city state’s attorney’s office. 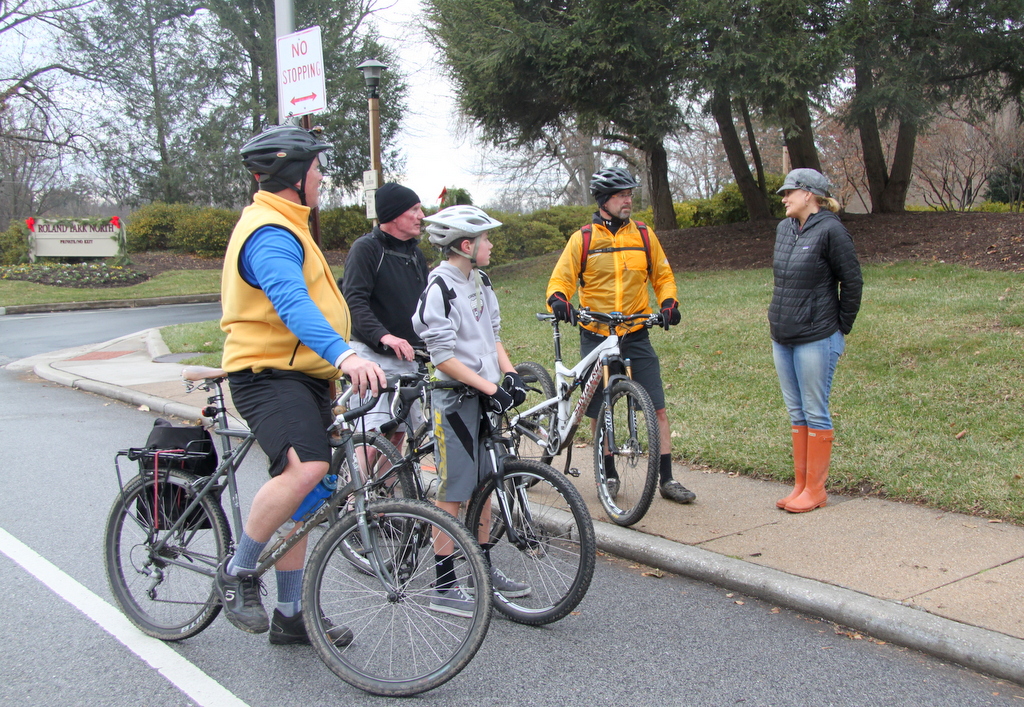 Bicyclists Scott McNary, Phil Kennedy, Ethan McNary and Bob Compton of Towson stopped at the scene on their way back from a ride downtown. (Photo by Fern Shen)

(In an odd coincidence, CBS NFL writer Jason LaCanfora, who happened upon the scene and gave an account of it, had his own experience with drivers leaving an accident scene when his wife was injured by a hit-and-run driver while jogging.)

Gore, Traill and other cyclists who saw online photos of the deeply indented and smashed windshield of the Subaru wagon involved in the crash, said it spoke volumes and left them with little sympathy for the motorist who initially fled.

“There’s no way you could not know you’d hit somebody,” Gore said.

“He was alive after it happened. She might have been able to help or call for help if she’d stayed on the scene,” said Lora Peters, who was walking by, looking for the spot where the fatal bike crash occurred.

Hearing about it yesterday had left her deeply disturbed, Peters said.

“I would have been on my bike this morning but I had a kind of panic attack about it,” she said, recalling her own collision with a car two-and-a-half years ago. She said she narrowly avoided being struck when the vehicle made a left turn right across her path. Instead she crashed into the side of the car. 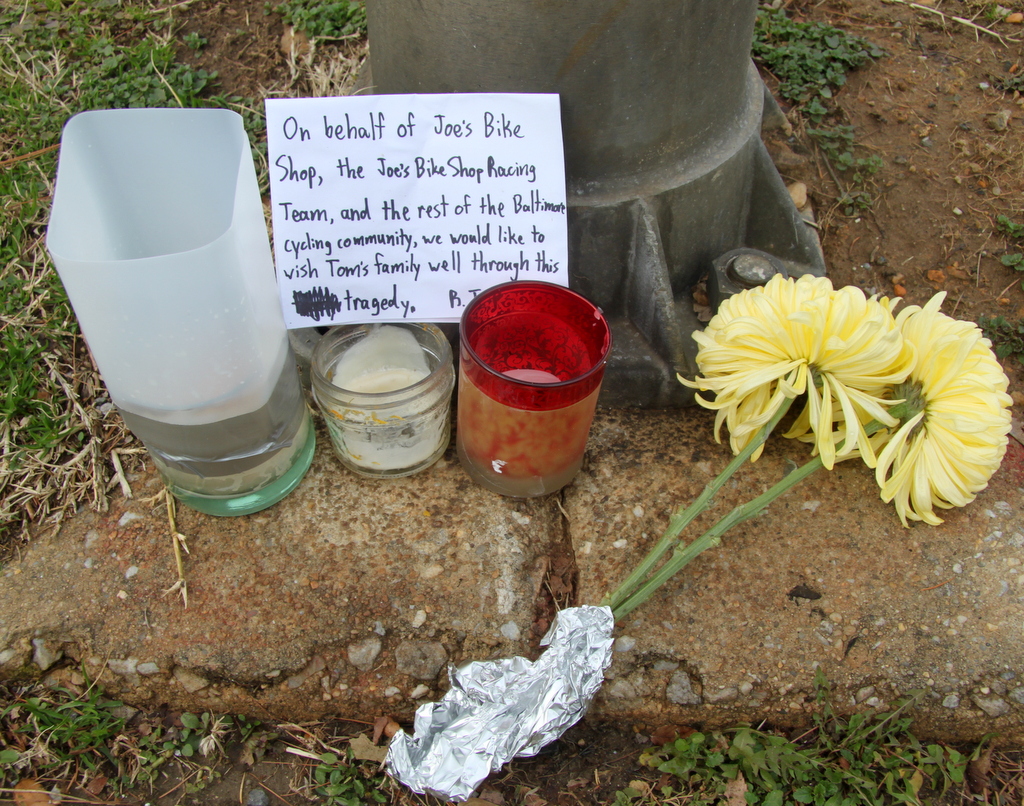 Notes and flowers from a candlelight vigil bicyclists held last night near the crash scene. (Photo by Fern Shen)

She noted that the incident occurred not in a congested, busy or poorly designed streetscape but in a quiet nearby residential neighborhood – “it was just right over there in Homeland.”

Yelled at and Worse

Other bicyclists who stopped to pay their respects had their own tales to tell about encounters with impatient and hostile motorists.

“I’ve been yelled at and egged. Yesterday, I had somebody throw cigarettes at me,” said Scott McNary. “Mostly this happens up in the county.”

McNary and companions Bob Compton, Phil Kennedy and Ethan McNary made a point of stopping at the crash scene on their way back from a ride to downtown.

With police still investigating Saturday’s crash, many who came to pay their respects yesterday noted that Palermo had a business, building bike frames and was an experienced cyclist.

“I’m sure he was minding his own business in the bike lane, right where he was supposed to be” said Howard Simon, of Remington, who said he rides on Roland Avenue frequently.

Others ran through the list of fatal crashes claiming cyclists’ lives in recent years (including John R. “Jack” Yates on Maryland Avenue in 2009 and Nathan Krasnopoler on West University Parkway in 2011) and urged prosecutors to hold drivers accountable.

“Our thoughts are with the family and friends of Tom Palermo, who was killed while riding his bicycle on Roland Avenue. Tom was a passionate bicycle builder, a father, and a friend to many people who ride bicycles in Baltimore.

While details of the crash are still emerging, we know the driver of the car involved initially fled the scene, leaving Tom to die on the street. It is clear that dedicated bicycle lanes were not enough to keep even an experienced bicycle rider safe.

Bikemore urges the justice system to hold the driver who killed Tom accountable for her actions.

Bikemore will continue to advocate for Baltimore to follow the lead of other major cities and build physically-separated bicycle infrastructure to protect the growing number of people who ride bicycles for transportation and recreation.

Roland Park residents and Bikemore asked the city to improve the Roland Avenue bicycle facilities during the resurfacing project that is currently underway. Traffic-separated bicycle lanes could have prevented a crash like this. Unfortunately, these requests were ignored in favor of maintaining vehicular traffic speeds, speeds which likely contributed to Tom’s death.”

Not everyone who came to pay respects yesterday was a cyclist. A woman walked over from the nearby apartments and held up three small pots of poinsettias.

“Would it be appropriate for me to leave these?” she asked the four bike riders. They told her it was, and thanked her. 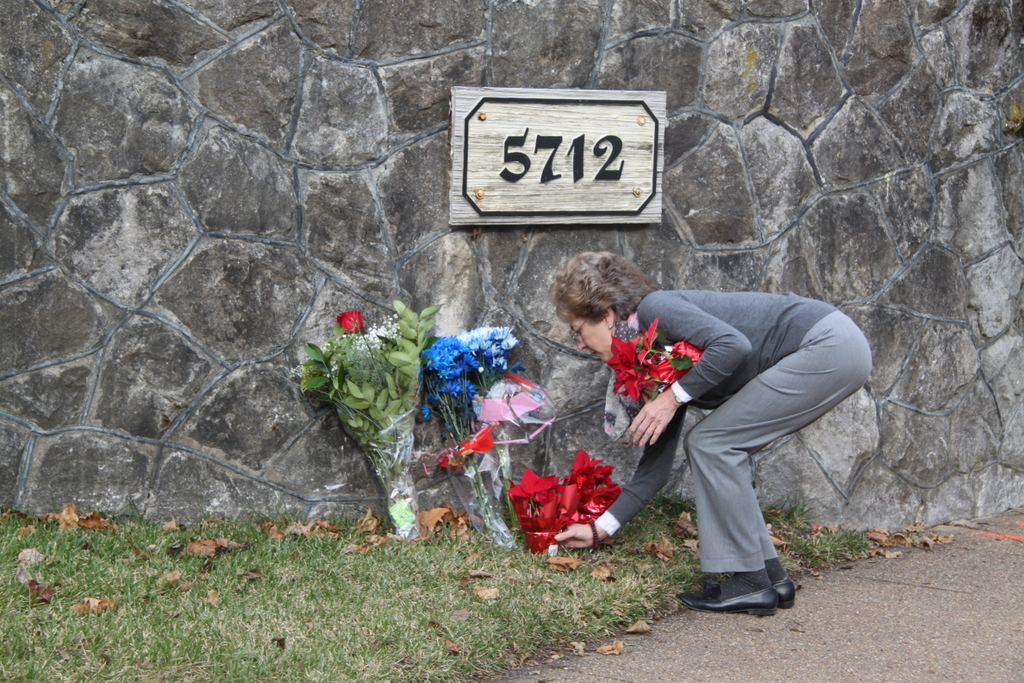 One of many who came to leave flowers at the roadside memorial for Tom Palermo yesterday. (Photo by Fern Shen)