The Baltimore Brew has been at the forefront of reporting the unfolding case of Episcopal Bishop Heather E. Cook, who was charged yesterday with DUI, manslaughter and leaving the scene of an accident by Baltimore authorities.

Given the worldwide interest in the case and the major issues it raises – about cyclists’ safety, diocesan conduct, equitable justice in Baltimore, the hazards of texting while driving, drunk driving and approaches to substance abuse treatment – we thought to collect our reporting so far in one place.

Here are 11 Brew stories that uncovered or analyzed key facts about the fatal crash on December 27 that claimed the life of a 41-year-old bicyclist and father of two.

Grief and anger at scene of fatal bike crash (12/28/14) – Baltimore bike community reacts to the crash, pays respects to late bicyclist Thomas Palermo. At this point, the identity of the driver – and circumstances of the crash – were publicly unknown and minimal information was disclosed by Baltimore police.

Episcopal Bishop identified as driver in fatal bike crash (12/28/14) – The first media disclosure that Suffragan Bishop Heather Cook was the driver in the crash, that she left the scene, and that she was arrested in 2010 for drunk driving and marijuana possession in Caroline County, Md.

Witness says car left scene of bike crash for 45, not 20, minutes (12/29/14) – Accounts from two witnesses who said it was much longer than 20 minutes before Cook returned to the fatal crash scene. A cyclist describes chasing car with a nearly shattered windshield to a nearby apartment complex.

Citing “forgiveness,” diocese elected Cook despite 2010 drunk driving infraction (12/30/14) – Diocesan officials say some church officials knew of her DUI and marijuana charges before recommending her as a candidate for bishop. Story includes details from the Caroline County Sheriff’s file on the DUI case, including photos of whiskey bottles and the severely shredded tire of Cook’s 2001 Subaru, the same car that hit Palermo.

Online clamor over fatal bike crash includes calls for Cook to resign (12/31/14) – Includes video of a sermon by Bishop Cook calling for “personal responsibility” and giving an example of how Christians should react “if an animal or, God forbid, a human being should step out in front of us” while driving.

More than a thousand ride for Tom Palermo and safer biking (1/1/15) – A bike ride starting from the parking lot of the Episcopal Diocese of Maryland headquarters and ending at the spot where cyclist Palermo was fatally struck.

OPINION: Justice for all? Why hasn’t Bishop Cook who struck bicyclist Palermo been charged? (1/5/15) – “If one of my clients, who are mostly African-American men, hit Palermo, charges would have been immediately filed against them,” observes public defender Todd Oppenheim in an op-ed that caused major ripples in Baltimore’s legal community.

“She said she thought she had hit a bicyclist and was in shock,” priest says of Bishop Cook’s reaction to fatal crash (1/6/15) – Diocesan officials release their version of the crash, following a closed-door session with clergy at a retreat center in Frederick County.

Boys Latin students were first to stop to help injured cyclist Palermo (1/8/15) – Cook didn’t stop to help Palermo, who was alive in the moments after the crash. But these high school students did. One of them spoke to us.

Episcopal bishop to be charged with DUI, manslaughter and leaving scene of accident (1/9/15) – After nearly two weeks of silence, the Baltimore State’s Attorney’s Office announces felony charges, saying Cook had been drinking and was texting at the time of the crash, and had a blood alcohol level nearly three times the legal limit.

Bishop Heather Cook’s bail set at $2.5 million (1/9/15) – Bail is set at a brief hearing that Cook attends after being transported, sources tell The Brew, from an alcoholism and drug treatment center near Havre de Grace. She is jailed in the downtown detention center. 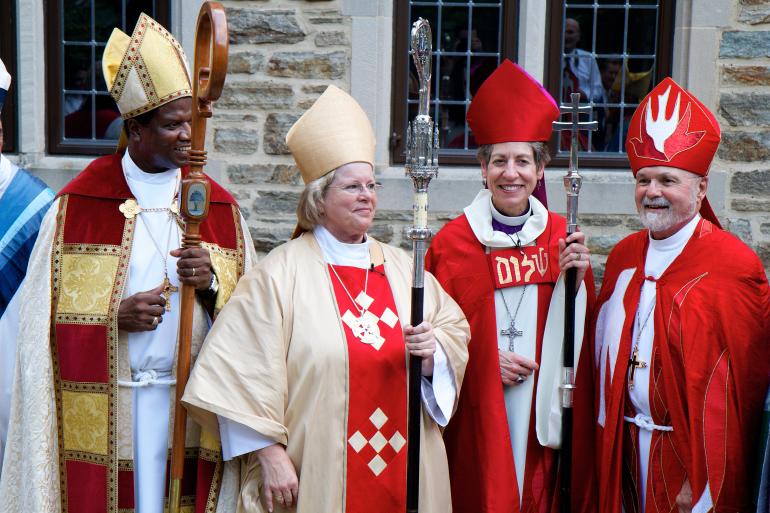 – Fern Shen can be reached at fern.shen@baltimorebrew.com