Mayor Stephanie Rawlings-Blake and the City Council need to get serious if Baltimore is ever to achieve its stated goal of becoming a bike-friendly city, says the 2015 Bike Master Plan whose final draft copy has been obtained by The Brew.

The 94-page report – which has not been publicly released – faults the city for reducing funds available for bike lanes and other infrastructure. It says the City Council needs to amend ordinances and eliminate fees that currently impede bicycle use.

The latest figure (FY13) indicates that spending has bounced back to $374,000, but that’s still not enough “to implement and fully realize the goals of this plan,” says the report prepared by consultants McCormick Taylor and Sabra, Wang & Associates for the city Department of Transportation.

“Funders and grant providers are cautious of jurisdictions that seek funds, but do not provide their own matching funds,” it notes. The Rawlings-Blake administration “must show it is serious” to state, federal and private funders by establishing a dedicated fund for bike infrastructure in the DOT budget.

The report, which updates the 2006 Bike Master Plan, has been circulating around city agencies, the Greater Baltimore Committee and cycling advocacy groups, but is not publicly available or posted on-line.

A public hearing on the master plan is scheduled for Wednesday, January 28, at the Enoch Pratt Central Library. Sources told The Brew that the report is set to be released a week or so before the meeting.

The report suggests that, provided long-term city funding, Baltimore could achieve its goal of establishing 250 new miles of bike lanes by 2028. Over the past decade, the city has created 100 miles of on-street bike lanes and 39 miles of off-road trails. 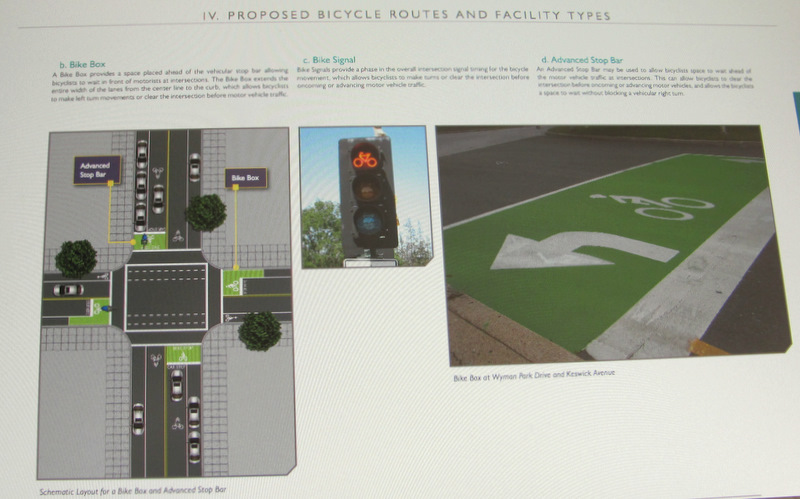 The report recommends that the city install more “bike boulevards” that include vehicular speed bumps, mini-roundabouts at intersections, and sharrow lane stripping. So far, the main example of a bike boulevard, Guilford Avenue, was completed without a number of traffic-calming features because of insufficient funds.

It also calls for replacing all unsafe stormwater inlet grates with bicycle-compatible grates and updating the City Code to allow bike riding on sidewalks under certain circumstances.

The city says it will soon put out to bid construction of a north-south cycle track on Maryland Avenue/Cathedral Street and for additional tracks between Mt. Vernon and the Johns Hopkins Hospital.

Yesterday, the Board of Estimates approved $115,000 to Toole Design Group to complete design services needed to bid out the Maryland Avenue track.

In addition to dedicated capital funding, the report contains a laundry list of other actions that could make Baltimore more bicycle friendly:

• Offer a tax credit to city employees “who bicycle as a primary mode of transportation.”

• Institute a standardized policy on the use of sharrows or shared vehicle-bicycle lanes.

The report notes that the City Council issued a resolution in 2009 establishing “ciclovia events” where streets are open only to bicyclists, skakeboarders, pedestrians and “other people-engaging activities.”

So far, however, only Roland Park has held such events. “Ciclovias could become more popular if funding were available to assist communities in paying the Police Department fees for traffic enforcement,” the report says, especially if other city agencies involved in street closings were more committed to the program.

The January 28 meeting on the Bike Master Plan is scheduled between 5:30 and 7 p.m. in the Enoch Pratt Library Auditorium. 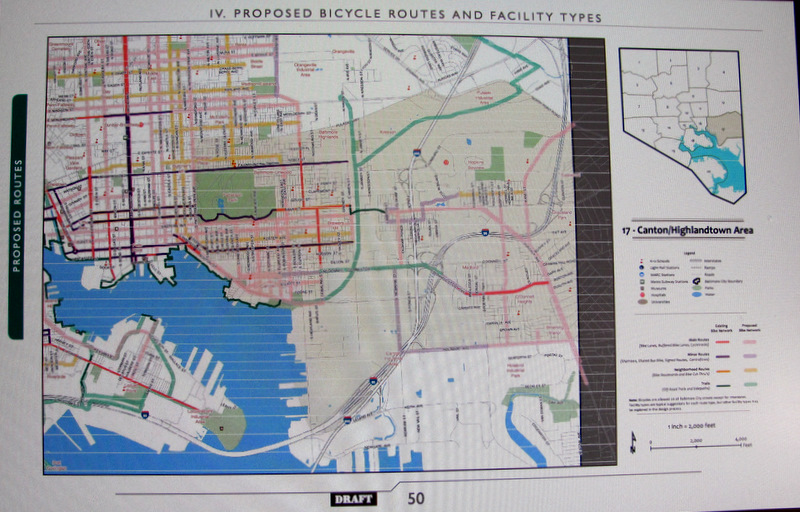 New bike lanes and bike trails in Canton and Locust Point envisioned over the next 15 years by consultants for DOT. (Bike Master Plan)