Two hot water heaters, 14 tires, seats from an old bowling alley, and a rusty newspaper box were just a few of the 8,000 pounds of weighty and historic castoffs volunteers recently retrieved from a stream bed near the Falls Road Light Rail stop.

Blue Water Baltimore was cleaning the bed as part of Project Clean Streams, when they came upon the motherlode, said Blue Water’s volunteer director Katie Dix.

Dix said that while the area had very little litter (Friends of Robert E. Lee Nature Center take care of that), the area is prone to dumping and a number of items appeared to have been buried in the stream bed for many years.

“Some things had been there so long they were embedded, and the stream bed created itself around them,” said Dix.

“The dumped items have become part of the landscape.” 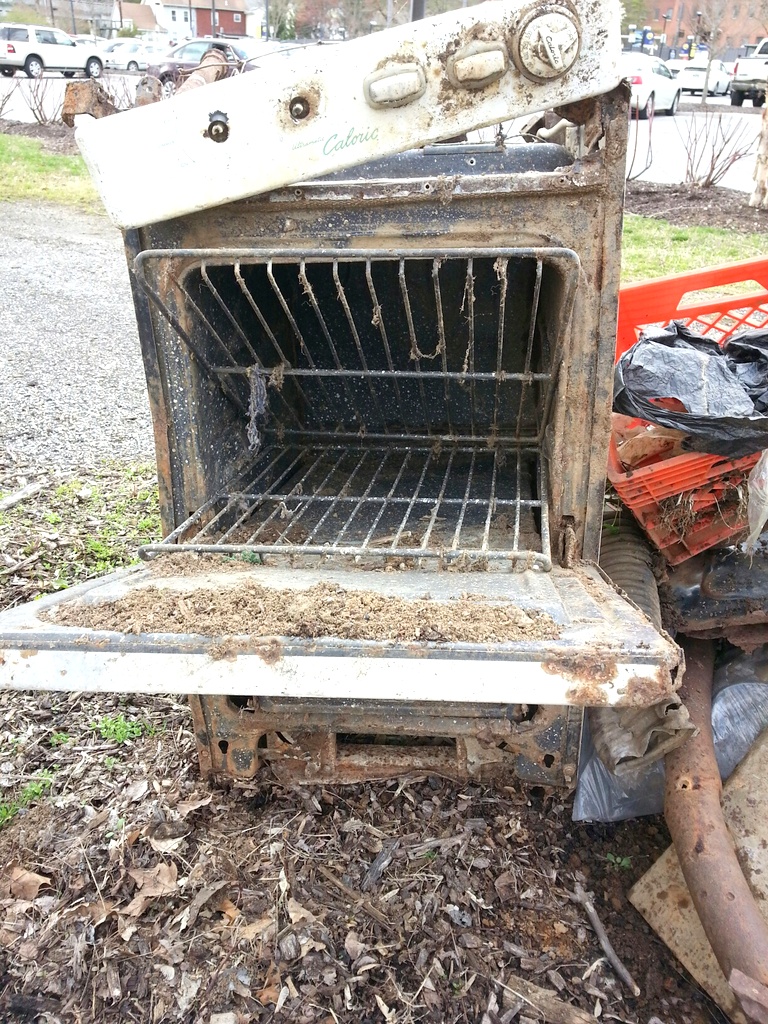 A 1960s-era stove was part of the 8,000 pounds of debris retrieved from the stream bed. (Photo by Blue Water Baltimore)

Indeed, unlike typical dump sites where dumping is more recent, this one also had a number of historical items.

“I’ve been told this stream bed is where a lot of stuff was dumped after Baltimore’s 1960s riots,” she explained.

The 34 volunteers, from T. Rowe Price, also recovered what looks like the hood of an old military vehicle, Dix said.

That, and an oven, an old washing machine, and three sinks.

Dix said the 8,000-pound Falls Road cleanup is the largest volume of dumped material Blue Water has picked up from one site so far this year.

Project Clean Stream continues through May 11.

There is a cleanup this Saturday, April 25, along the Mill Corridor from 9 a.m. – 12 noon. Volunteers should meet at the intersection of Falls Road and Clipper Mill Road to pick up supplies.