UPDATE: Rumored protests that were to take place this afternoon in the Inner Harbor – which caused several downtown employers to dismiss their workforces early – have not materialized.

Clusters of police are currently stationed at the Visitors Center on Light Street and other locations around the Inner Harbor, but no demonstrations that can be observed at this time, The Brew’s Danielle Sweeney reports.

Other employers, including the University of Maryland Baltimore campus, and some retail stores in the Inner Harbor and Harbor East also dismissed their employees early today.

Rocks and bottles have been thrown this afternoon at police along the perimeter of Mondawmin Mall. Clusters of young people have dispersed from the mall area, some setting fires and damaging property.

One group, bearing bricks and sticks, walked aggressively down Auchentoroly Terrace (on the western side of Druid Hill Park) toward police stationed Gwynns Falls Parkway. Another group has headed down Pennsylvania Avenue and has damaged a police car at North Avenue.

As mourners packed the New Shiloh Baptist Church in West Baltimore for Freddie Gray’s funeral today, city police were announcing they have received a credible threat from gangs to “take out” police officers.

“The Baltimore Police Department/Criminal Intelligence Unit has received credible information that members of various gangs including the Black Guerrilla Family, Bloods, and Crips have entered into a partnership to ‘take-out’ law enforcement officers,” the release from the police Media Relations department said.

There was standing-room-only for mourners who attended the Freddie Gray funeral at the New Shiloh Church on North Monroe Street. There were emotional speeches from Rev. Harold Carter Jr., who presided at the service, and Rev. Jamal H. Bryant, of the Empowerment Temple AME, who delivered the eulogy.

Outside the sprawling church building, TV reporters waited for the funeral to end, plainclothes police monitored the scene, and knots of local residents stood on the sidewalks, gaping at all of the VIP activity.

“We Will Not Fail You”

Holding back tears at the funeral service, U.S. Rep. Elijah E. Cummings repeatedly asked the audience, “Did you see him?” referring to the 25-year-old Gray, whose death after his spine was allegedly broken while in police custody has sparked days of protests and a violent confrontation between demonstrators and police near Camden Yards on Saturday night.

“In his death – I don’t want to see him leave,” Cummings said, “but I thank God for what he left.” He then vowed to the audience, many jumping to their feet: “I am telling you, we will not rest until we address this injustice. We will not fail you.” 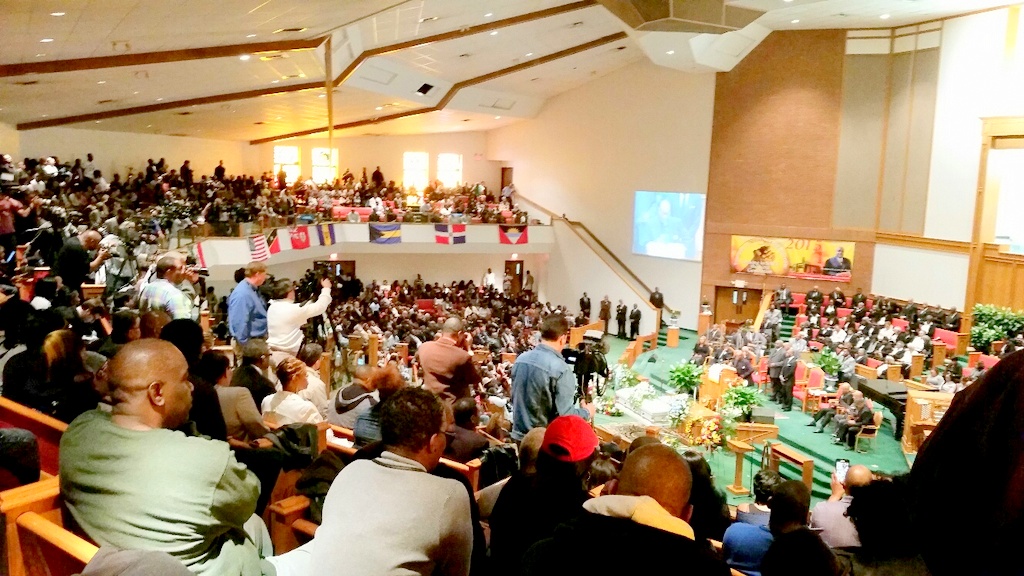 Meanwhile, the Rev. Al Sharpton announced that he is planning a trip to Baltimore this week in connection with the Gray case. Sharpton, who hosts PoliticsNation on MSNBC, is president of the National Action Network (NAN).

“I have been asked by many in the Baltimore area since day one to get involved in the justice for Freddie Gray movement. Though I have discussed it on my daily radio and TV shows and been in touch with our NAN Baltimore chapter, I resisted personal involvement,” Sharpton said.

Sharpton said he decided to come to Baltimore because the police department’s investigation of Freddie Gray’s death, promised to be completed this Friday, may not be publicly disclosed.

“I am saddened and disappointed that there now may not be a report released on May 1. It is concerning to me that a deadline that the police themselves had set and announced they have now conveniently changed,” he said.

According to the release, the civil rights leader was invited here by Rev. Westley West, a local clergyman, and morning radio show host Larry Young, head of the Baltimore chapter of NAN.

Sharpton said he hopes to meet with grassroots activists and faith leaders to schedule a two-day march in May from Baltimore to Washington. Sharpton wants to bring Gray’s unexplained spinal cord injury – as well as the police-involved deaths of Eric Garner, Walter Scott and Eric Harris – to the the attention of newly-appointed U.S. Attorney General, Loretta Lynch.