In the wake of Freddie Gray’s fatal arrest and its aftermath, people have seen a ray of hope in Baltimore prosecutor Marilyn Mosby.

Mosby has often talked about how, growing up black in a tough Boston neighborhood, she was the daughter of a single mother and how her cousin was mistaken for a drug dealer and gunned down just outside of the house where she lived.

She also regularly brings up her family’s deep roots – “five generations,” she told CNN’s Don Lemon – in law enforcement. Mosby points out that she is the daughter, niece and granddaughter of police officers in Boston.

“My recently departed and beloved grandfather [Prescott R. Thompson] was one of the founding members of the first black police organization in Massachusetts,” she noted, at the announcement of charges against police officers implicated in Freddie Gray’s fatal spinal injury.

Growing up in a law enforcement family, she has said repeatedly, helped shape her personally and as a prosecutor.

That family background is an especially useful point of inquiry as Mosby – at 35, one of the youngest top prosecutors of a major American city – steps into the middle of the intense and polarized national debate about the breakdown of trust between police and citizens in poor neighborhoods.

And that’s even more true because of details she has not yet shared publicly, one of which is that her father was, in her words as quoted in a campaign document, “a crooked cop.”

In 1989, her father, Alan C. James, and another Boston police officer were alleged (along with a third unidentified suspect) to have flashed badges and robbed young men in Dorchestser, according to a September 14, 1989 story in the Boston Globe.

The officers were charged with two counts of armed robbery and three counts of assault and battery with a dangerous weapon, the Globe said. 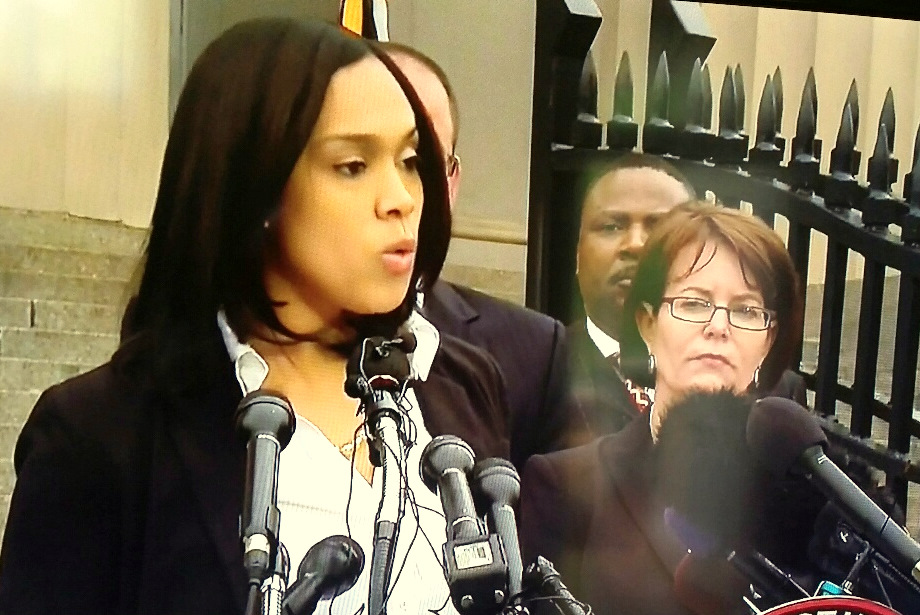 “One man was purportedly robbed of $40 and a second in a wheelchair of a radio, after the alleged assailants’ demands for drugs went unmet. The third [victim] purportedly had a gun placed to his head,” according to the newspaper.

James, who said in court he did not participate in the holdup, was acquitted, but he was dismissed from the police force.

“Police Commissioner Francis M. Roache fired James for ‘conduct unbecoming an officer’ on April 5, 1991, the day a Superior Court jury acquitted James of charges stemming from a robbery of three men on Norfolk Street in Dorchester on August 19, 1989,” according to a follow-up Globe story.

The Civil Service Commission ruled a year later that James should be given his job back because he had not been given the “opportunity to cross-examine witnesses against him during an internal hearing,” the Globe also reported.

Messages left for James with a family member at his Massachusetts home were not returned. The Brew asked a spokesman for the Boston Police Department if James was ever rehired to the force; he has not called back.

Mosby’s office has not returned calls earlier this week asking for comment. Her press office called back this morning and was given more details on the article, but they have declined to respond or make Mosby available for an interview.

Mosby told some of the story herself in an unpublished biography written by her staff during her campaign and obtained by The Brew.

Her campaign manager, Arinze Ifekauche, currently a communications staffer at the state’s attorney’s office, today described the document as “a team effort” and declined further comment.

The passage reads in part:

“Spotting good and bad cops is second nature to someone who grew up with them. Mosby’s father, who was around off and on throughout her childhood – and into her adult life – served on the Boston Police force alongside her mother and uncles.

“’My dad was a crooked cop,’ Mosby says dispiritedly. “’He confiscated drugs and money from the dealers on a regular basis.’”

The unpublished document goes on to note that due to his drug and alcohol problems, Mosby’s father was “kicked off the force and sent to a rehabilitation program for treatment.”

Speaking in 2013 to the graduates of the Gaudenzia drug treatment program at Morgan State University, according to the campaign document, Mosby inspired them with the story of how another family member overcame drug addiction:

“I stand before you all today as testimony that despite outward appearances, we’re all in this battle together,” Mosby said to loud applause.

The so-called “War on Drugs,” many argue, has contributed to the breakdown of relations between citizens and police by treating illegal drugs less as a public health concern and more as a law enforcement challenge.

Mosby grew up in her grandparents’ house in Dorchester, known in the neighborhood as “the police house,” surrounded by uncles as well as a mother and grandfather on the Boston force.

That law enforcement is a high calling – and a difficult one – was instilled in her there, Mosby said. She told the Globe: “I witnessed firsthand the commitment it takes to sacrifice in life for the betterment of your community.”

An April 10, 1994 Globe story relates the experience that her grandfather, Prescott Thompson, said inspired him to become a police officer.

“Thompson recalled an incident which crystallized his desire to become an officer. He was young and impressionable, maybe 12 or 13 years old at the time. His brother was sick and his mother sent him around the corner to pick up medicine, he said. The pharmacy on Humboldt Avenue was closing, but the owners had the prescription ready. “Run straight home,” one of the owners told him.

Just as he cleared the door, four men slammed him up against a wall. The men were plainclothes Boston police officers, he said, who did not explain a thing until the store owner opened the door.

“He fits the description of a purse snatcher,” Thompson recalls one of the officers barking.

“He didn’t do it,” the store owner snapped. “His mother just sent him down here. He’s got a prescription in his pocket.”

The officers let him go, but tears welled in his eyes as he walked back home. “I made a promise that that would never happen to me again,” he said. “I never forgot that. Never.” He swore that he would become a police officer, and that he would prevent that sort of treatment from happening to another black child.”

The article was a feature about Thompson’s lawsuit for reinstatement to the police force, which he said discriminated against him by keeping him off the force after an eye injury.

“By its own admission, the [Boston] Police Department has allowed at least four officers, all of whom are white and have the use of only one eye, to work for the department,” the article said.

Thompson, the founder of the Massachusetts Association of Minority Law Enforcement Officers, died in February. In the article, he talked about how his grandfather was an officer in New Bedford.

Considering the challenges of Mosby’s early years, her subsequent accomplishments are striking. From the second grade through high school, she participated in the METCO program (Metropolitan Council for Educational Opportunity), attending schools in a suburb of Boston.

According to her husband, City Councilman Nick Mosby, Marilyn was bused two hours a day to elementary school, where she was the only minority student, and graduated with honors from high school, where she actively participated in student government. 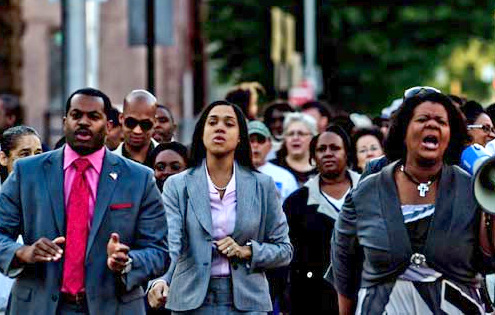 She met Nick, a Baltimore native, while attending Tuskegee University on a scholarship. The two became college sweethearts. She then returned to Boston in 2002 and earned a law degree from the Boston College Law School.

Upon graduation, according to Nick, Marilyn received corporate job offers from across the country, but “there was only one thing that Marilyn wanted to do – that was to fight for the people.”

Settling in Baltimore, the couple married in October 2005 while she was clerking for the Baltimore City State’s Attorney’s Office. The following year, she became an assistant state’s attorney, a position she held until November 2011.

In that same year, Nick Mosby was elected to the City Council representing West Baltimore’s 7th District. Marilyn became a litigator for the Liberty Mutual Insurance Co. and began to lay the groundwork for her challenge to state’s attorney Gregg Bernstein.

It was an audacious move for a junior prosecutor who had never prosecuted a homicide case.

Taking part in announcing her candidacy for the the post in June 2013, Nick Mosby praised his wife for possessing “an ambition and a drive as strong as mine” and added: “It’s incredible when you look at her humble beginnings and the obstacles that she faced throughout her life to put her in the current position that she’s in today.”

He explained that “I’ve been able to see her jump those hurdles, break down those barriers and completely break through some of the systematic issues that plague our city.”

She drilled down on the record of the state’s attorney’s office under Bernstein, blasting his leadership as “out of touch” and his perceived bias in favor of police officers implicated in civilian brutality cases.

In last June’s Democratic primary, she defeated Bernstein (despite his outspending her three-to-one) and went on to a landslide victory in the general election in November.

Almost immediately, when she took office in early January, she was faced with a highly-charged case. Mosby won applause for her announcing manslaughter and DUI charges against Episcopal Bishop Heather Cook, who was involved in the hit-and-run death of bicyclist Thomas Palermo.

Criticism came her way, too, in the wake of her office’s purging of seasoned prosecutors (reportedly in one case dismissing a prosecutor during the lunch break during a trial).

But the worldwide reaction that has greeted her entry onto the stage in the Freddie Gray case has been overwhelmingly positive.

Since her press conference last Friday announcing charges against six police officers, Mosby has been profiled by The New York Times, The Guardian, Newsweek and pretty much every major news organization. 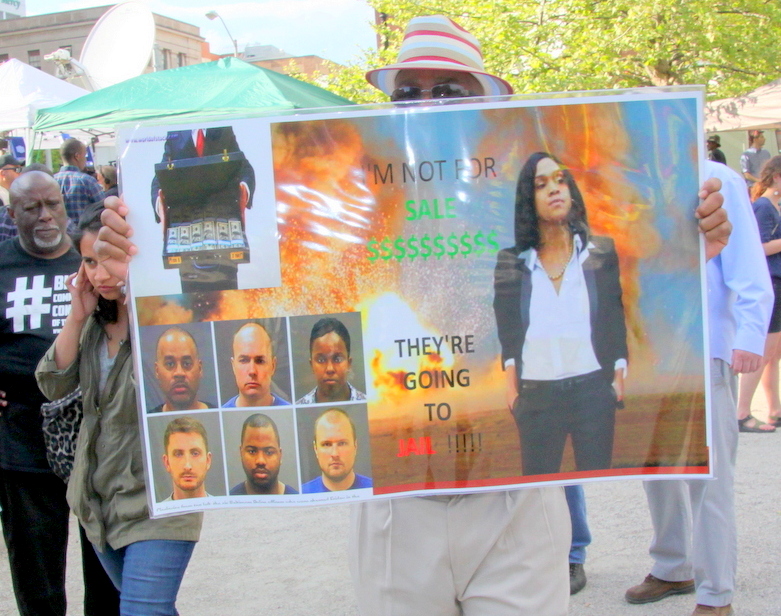 Twitter, where @MarilynMosbyEsq now has 35,000-plus followers, went viral after her May 1 news conference. “Baltimore, meet your new Mayor,” one new follower tweeted.

“Thank you, @MarilynMosbyEsq, not for giving people what they needed to hear, but for showing that the rule of law can also serve the people,” local community advocate Kevin Griffin Moreno tweeted.

Last week Gene Ryan, president of Lodge 3 of the Fraternal Order of Police, called for Mosby to recuse herself from the Gray case, citing her connections to Gray family attorney William H. “Billy” Murphy (who contributed $5,000 to her campaign and was on her transition team) as well as her marriage to a city councilman.

Amid reports that arrest documents for two officers in the Freddie Gray case were drawn up for the wrong people, a former city prosecutor who blogs about justice issues faulted Mosby for a hasty prosecution, aimed more at personal ambition and crowd control than finding charges that would stick.

More widespread is the praise she is receiving for the forceful and personal way she spoke at the news conference, and not just with her prepared remarks.

“Mosby has been the first attorney in a recent case to hear that pain, personalize it, and truly respond to it,” the National Journal wrote, comparing her announcement of charges to those of the prosecutors handling the police-involved deaths in Ferguson Missouri, Staten Island, and Cleveland.

“The way that prosecutors responded to unrest and protests in the wake of these cases is instructive: In Mosby’s case, it shows the best possible way to communicate with a pained community,” the Journal writers observed.

Now all eyes  will be on Mosby to see how she summons all her knowledge, life lessons, legal knowledge and personal drive to bring about justice.

• Reporters Mark Reutter and Danielle Sweeney contributed to this story.