There had been a half dozen tents, a couch, a cat and all the other possessions of the people who called the spot under the Route 40 overpass along Martin Luther King Jr. Boulevard home.

Declaring the longtime encampment unsafe and ordering it swept away, city officials said they would find the residents another place to live. But when Department of Public Works employees came Friday morning, the residents said they had no place to go.

Watching the city destroy the only home several of them had had for years, many simply allowed the workers to dispose of their tents, blankets and other items as trash. The city’s offer to store their things for a few weeks had one man exploding with frustration.

“Why would I store it with nowhere to go? What’s the point of keeping it?” said Robert Moore, who had been staying under the overpass with his fiancée for several months.

“The city don’t care about us. There are murderers, rapists and robbers out there, and all we really do is panhandle,” said Moore, who said his fiancé is now four months pregnant. “We never had no problems but the city hates to be showed up.” 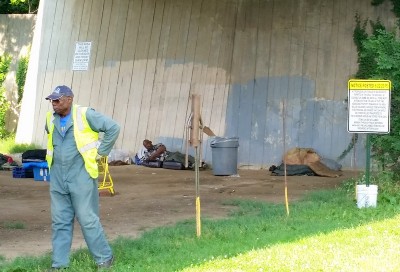 Larry Peterson, a veteran who said he has been without a home for the past 18 years and living at the encampment under the overpass for four years, seemed at a loss for words when asked where he would go.

Homeless people and advocates alike protested at the scene, which unfolded at the West Franklin Street intersection. Protesters carrying signs blocked off southbound lanes of Martin Luther King Jr. Boulevard for about 15 minutes and even laid down on the roadway until police officers forced them to relocate.

Several tried to help out by ensuring that people’s belongings weren’t immediately thrown away until their owner had given consent.

“Where’s Stephanie?” one shouted, referring to Mayor Stephanie Rawlings-Blake.  Others tried to argue against what they saw as an unlawful eviction of the homeless.

“This ain’t a luxury, this is survival” said activist Duane “Shorty” Davis. “It’s not all mental health issues like people say it is, it’s socioeconomic deprivation.”

“Homeless lives matter,” said a sign taped up on a utility pole. “Our homeless need hands up, not a handout,” said another sign a man displayed.

In the end, the residents and protesters could only watch as the area was cleared and fenced off.

The razing of homeless encampments in Baltimore has been controversial, with a high-profile encampment near an I-83/Jones Falls Expressway ramp cleared in March 2013 to a chorus of condemnation from advocates and city-wide debate over long-term solutions to the problem. Dubbed “Camp 83,” the high-profile spot was cleared again a few months later after the tents and makeshift shelters returned.

As with those actions, city officials said they hoped to find those evicted on Friday placements in homeless shelters where they would then be helped to get more permanent housing. 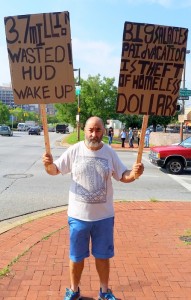 The city’s “10-year plan to end homelessness,” announced in 2008 and called “The Journey Home,” was described as a strategy to find more stable forms of shelter for the city’s estimated 4,100 homeless persons.

But according to a formal policy introduced into the City Council record at a hearing in 2013, the city reserves the right to clear homeless encampments deemed unsafe or unsanitary even “if permanent housing cannot be secured by the date the encampment is scheduled to be cleared.”

Advocates said they saw little sign City Hall had planned for what would happen after Friday’s razing of the camp on the city’s Westside – and faulted city officials for poor communications with outreach workers and advocacy programs.

“I was in a housing committee meeting for Journey Home two days ago and this wasn’t discussed,” said Antonia K. Fasanelli, executive director of the Homeless Persons Representation Project Inc.

“As far as I can tell there’s no plan. No reason to do all this. . .there was no effort to bring in advocate groups,” said Fasanelli, who is also chair of the American Bar Association’s Commission on Homelessness and Poverty. “It seems like they were trying to do it in a really secretive way.”

Jeff Singer, founder of Health Care for the Homeless, called the destruction of the encampment “a good example” of city government’s general lack of transparency.

“I don’t know what they thought they would gain by having no organized plan for afterwards,” said Singer, now with the group Housing Our Neighbors. He said their failure to warn advocates of their plans was telling.

“It gives them the appearance of shame – and they should be ashamed,” he said.

In the past, Singer said, there were rent subsidies, motel rooms, or low-income housing offered to people that had been displaced from the areas whrere they were staying.

In 2011, he said, the same overpass area was cleared out the day before MLK Day for the city’s annual parade. In that case he said, people were housed in motel rooms until alternative housing was found.

How Police and DPW Workers Felt

Out of all the people removed from the overpass Friday, only one man, Christian Johnson, appeared to be lined up for Section 8 housing – and Johnson said he was still waiting to receive the lease.

Advocates had mixed feelings about even that, noting that, once Johnson moves, it will be harder for them to find and support him, harder to get him the paperwork, keys and other things he might need to transition to more stable housing. 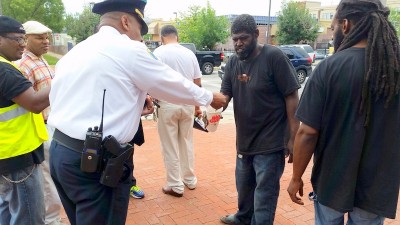 A Baltimore police officer gives one of the people evacuated from homeless encampment $10. (Photo by Ben Halvorsen)

Public officials and city workers on the scene, meanwhile, declined to comment, except for one DPW employee who declined to give his name.

“I don’t approve of any of it,” he said. “Instead of raising money for stupid shit, [city government should] find them a place to live.”

A police officer, meanwhile, spoke silently with his actions.

Asked by one of the encampment members for some help, he slipped him a ten dollar bill.