Mayor Stephanie Rawlings-Blake said it was just a coincidence.

On the same day the FOP released a report harshly criticizing Baltimore police leadership for mishandling events in the aftermath of Freddie Gray’s death and “leading [officers] to slaughter,”  the mayor summoned the media to City Hall to say she was replacing Commissioner Anthony W. Batts.

Just hours earlier she had in effect defended Batts, condemning the union report as “baseless and false information.”

In the nearly three months since the April and May protests and riots, Rawlings-Blake had stood by Batts’ actions and her own, amid blistering criticism from city residents, activists, civil libertarians, cable news talking heads and critics from across the political spectrum.

Didn’t Batts’ firing today – on the same day as the police union report – mean the constituency she had decided to “placate” was the FOP?

“I would say that it happened on the same day,” she replied frostily to a reporter’s question. “I don’t think many people who know me would suggest that I would do anything to placate the FOP.” 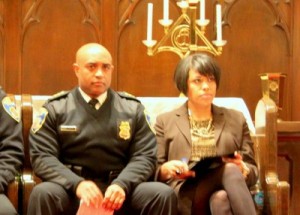 Batts and the mayor facing citizens at a meeting about crime in Canton last year. (Photo by Fern Shen)

So what, as another reporter put it, had changed? Why fire Batts now?

Rawlings-Blake cited the spike in city homicides that began earlier this spring but has surged dramatically since the riots, saying the public debate about police leadership was “distracting” from efforts to combat the crime.

“We cannot continue to have the level of violence we’ve seen, particularly over the recent weeks in our city,” she said. “We have made progress, and I don’t want to lose any of that progress.”

“Too many continue to die in the streets. Families are tired of feeling this pain and so I am,” she said, in her prepared remarks. “Recent events have placed an intense focus on police leadership distracting many from what should be our main focus, the fight against crime. So we need a change.”

The firing of Batts, hired from Oakland in 2012, came amid continued violence in Baltimore, including four people shot, three of them fatally near the University of Maryland Baltimore last night. The 42 homicides in May made it the city’s deadliest month in decades.

Some applauded the mayor’s decision to let Batts go, saying something had to be done to reverse the bloodshed.

“They’ve gotta do something. The city is out of control – every day another shooting, another killing,” said Larry Reston, a crew supervisor for a utility contractor wrapping up a job in north Baltimore.

Others said the firing of Batts was itself a distraction, from criticism about the mayor’s actions during the unrest and about deeper problems with the Baltimore Police Department.

“Firing Batts was easy, b/c it’s the appearance of change. But it’ll take more than his removal to undo the terror of the @BaltimorePolice,” tweeted activist DeRay McKesson. 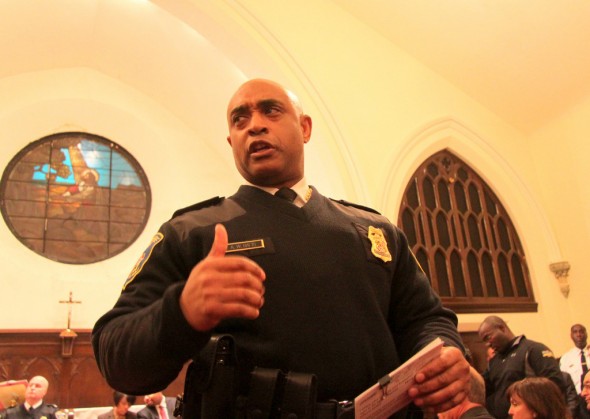 Commissioner Anthony Batts, at a community meeting in Canton in 2014. (Photo by Fern Shen)

Brown pointed to the recent op-ed by a bicyclist, Connor Meek, who described being mugged on a city bike trail and then turned away from two police district station houses where he sought help. The stations he was told, were closed from 7 p.m. to 7 a.m.

Yesterday, one day after his account went viral, the department ordered the stations to be open 24/7.

“The police stations not being open to Connor Meek and the perception that police weren’t there for white Baltimoreans is what did Batts in,” Brown tweeted.

“If violence in our city was the issue, then Batts would have been let go on April 28 or before when homicides were already spiking,” he said on Twitter.

Davis, meanwhile, asked to make some remarks as he stood by Rawlings-Blake, had messages meant to appeal to both those who fear crime and those who mistrust the city’s crime fighters.

Davis pledged to go after “bad guys carrying guns. . .violent and repeat offenders” but also stressed that he will improve relations with the community: “it’s not an enforcement relationship, it’s a service relationship.”