The second battle of Aliceanna Street parking – part of the larger traffic wars that have been engulfing Southeast Baltimore – began last night.

“DOT and this community have diametrically opposed visions and have for years.  They are focused on the needs of developers and commuters – not residents,” said Joanne Masopust, president of the Fells Point Community Organization.

“Their vision is to move more traffic through our historic neighborhood as quickly as possible.”

More than 70 residents had gathered at The Admiral Fell Inn to hear a new consultant’s report on mitigating traffic and improving multi-modal transportation in the southeast.

Many of them left the meeting saying that their community is being pushed aside by the Department of Transportation in order to serve the interests of developers and suburban commuters.

“It’s an historic neighborhood. Your report doesn’t mention that not at all,” said Fells Point resident Marta Kumer.

No Loss of Parking

The parking skirmish started in March as part of the traffic war spawned by new development that’s funneled thousands of cars into 19th-century waterfront communities of Fells Point and Canton.

Part of Aliceanna, from Central to Boston, was targeted to lose parking for three hours a day to improve traffic flow from Harbor East to Boston Street during the peak rush hour.

But amid an outcry from hundreds of Fells Point residents – many who don’t have the option of off-street parking – DOT backed down. 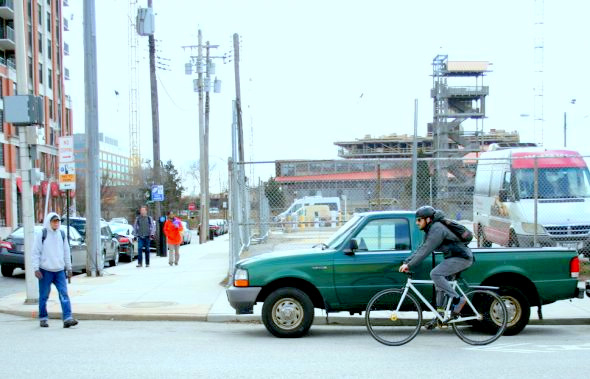 The agency has amended its plan to focus on three blocks of Aliceanna, from Chester to Boston, where a second right-turn lane will be added from 4-7 p.m., Monday – Friday.

While residents enjoyed a victory, they now have a new concern.

The new traffic mitigation report recommends that Aliceanna (as well as Fleet Street and Eastern Avenue) be evaluated to accommodate bike or bus lanes, which could remove parking on one or more sides of the street.

“It takes us back to square one,” Masopust said.

Aliceanna Street is already a designated bike route. It has sharrows (shared road) markers, which allow for simultaneous on-street parking.

The southeast has more than 35 development projects in various planning or permitting stages that, if completed in the next five years, will add about 20,000 more vehicles each day during rush hour, Valorie LaCour, chief of DOT’s planning division, told residents last night.

Unless changes are made to improve flow, intermodal connections and other access, she said, the “existing roadway network, as currently configured, will not be able to accommodate future traffic volumes.”

LaCour gave a brief presentation, highlighting some of the DOT’s options in the 36-page consultant’s proposal.

The southeast is already over-congested, with more than half of 34 critical intersections now operating at over 75% capacity for at least one hour a day, the report stated. 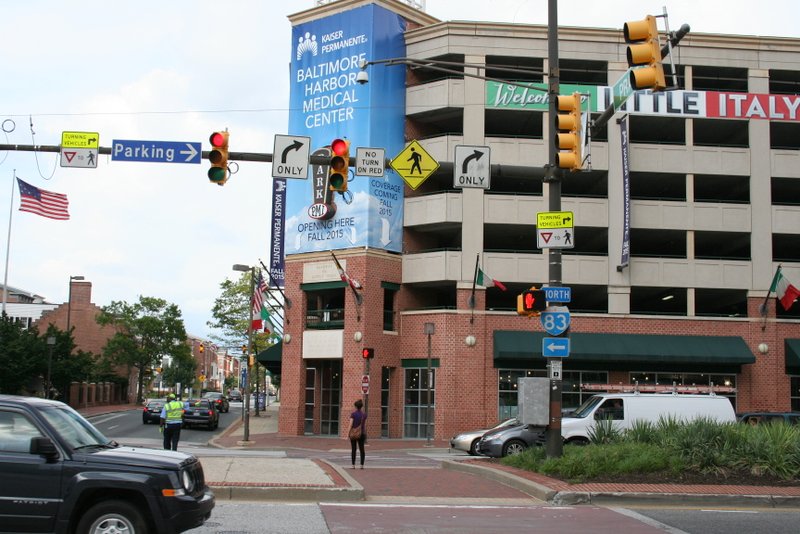 At Pratt and President streets (above), the consultant recommends removing one of two right-turn lanes to encourage traffic to travel further east to access Fells Point. (Photo by Danielle Sweeney)

“The southeast is already at or near capacity,” Sameer Sidh, DOT Chief of Special Projects, told the group, adding that mitigation was one of several strategies in the proposal.

One of the report’s key recommendations, that will reduce traffic to Aliceanna and Fleet, is removing one of the two right-turn lanes at Pratt and President streets.

Removing one right-turn lane would encourage more vehicles and cyclists to travel further along Pratt to access Fells Point and Canton via Central Avenue and Broadway. 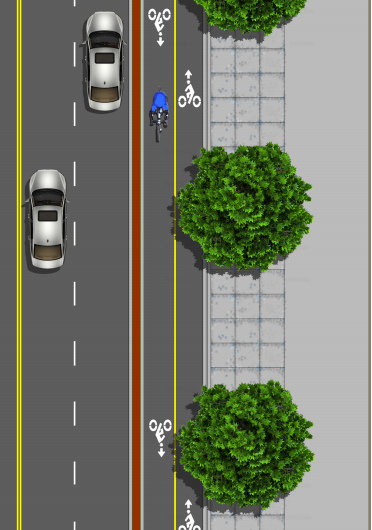 To facilitate this change, another recommendation is to install a “cycle track,” or protected bike lane, on Pratt Street from President to Broadway, and to construct buffered bike lanes (both northbound and southbound) on Broadway from Aliceanna to Monument streets.

A buffered bike lane has a painted separation from auto lanes to provide added protection for bicyclists.

LaCouer told the attendees that DOT also was considering a feasibility study that would look at building a new bicycle facility on Wolfe Street.

While most at the meeting said that more bikeways wouldn’t reduce the vehicular traffic, two residents said they welcomed the DOT’s focus on improving the southeast bike network.

“I’m 72,” said one of them, “and I shop and travel to the VA Medical Center on Greene Street on my bike. More people should ride bikes. ”

As the meeting neared its end, questions turned to the Central Avenue Bridge. The four-lane bridge, not yet under construction, will be built over an inlet and connect Harbor Point to Harbor East.

One resident asked why the bridge and Central Avenue roadwork, both essential to moving traffic through the area, aren’t going to be completed when the Exelon building is slated to open next year. 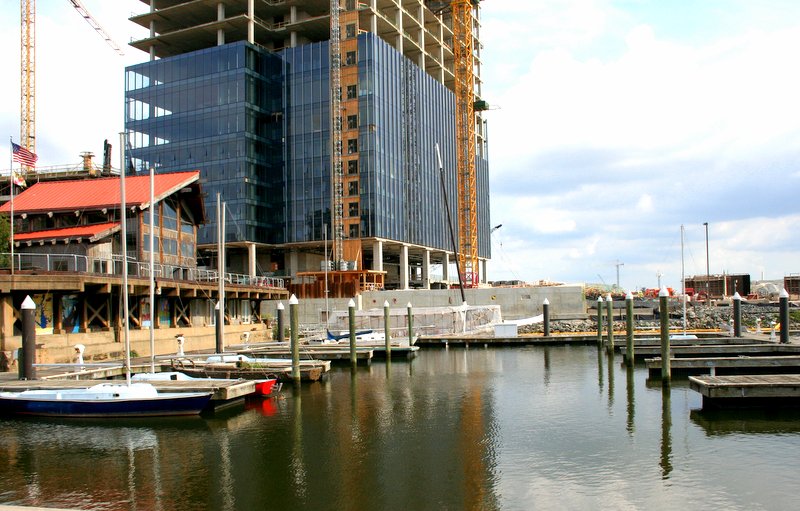 Site of the future Central Avenue Bridge, at Lancaster Street and Central Avenue, that will connect Harbor Point to Harbor East. The Exelon Tower is under construction in the background. (Photo by Danielle Sweeney)

“What is the deal with that? It has been under construction forever. What is the problem?” he asked.

Another posed the question that many in the room had on their minds: “Can you tell me if Central Avenue will be done before Harbor Point opens?”

“No, we cannot,” Sidh replied, “but it will be ready within a year of Harbor Point opening.”

“It’s a federal contract and the federal process is incredibly frustrating,” he said. “The Central Avenue bridge itself will be ready late next year. The rest of the roadway work, which includes the storm drain underneath, will last several years, at least two or three.”

Murphy said he would try to get a firmer timeline for the roadwork’s completion.

Taking in the news that Central Avenue would not be completed in time for Harbor Point’s opening, some residents spoke of the pressure they’re already feel from the harborfront’s residential and commercial build-up. 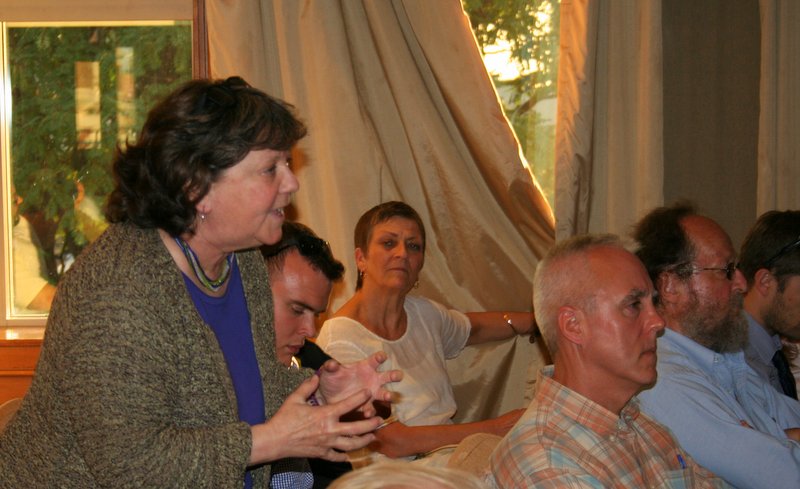 “And people who live here and work outside of the neighborhood have a hard time getting back home because of the traffic now.

“You are putting us in a vice that is so tight,” she added. “I think that’s truly what you want to do is to get us all the hell out of here so you can develop, too.”

But the elephant in the room was whether Fleet and Aliceanna streets were still being targeted for parking restrictions.

“Are Fleet and Aliceanna off the table?” Masopust asked Sidh, who responded by saying, “Will I make a firm commitment and say that nothing is going to happen to Fleet or Aliceanna? I will not make that commitment.

“Right now, the only thing we are looking at, pending comment, is the Aliceanna and Boston change. The rest of it. . . I think we need to study the corridor as a whole. And you got to think about it this way. We have a lot of development that is coming on board. We have to stay flexible and be able to adapt.”

Masopust said, “I respect your honesty in that, really I do,” then added:

The consultant’s report, the “Southeast Strategic Transportation Vision,” is posted on the DOT web site. DOT is accepting public comment on its recommendations through August 31.