Politics was not the ostensible reason for the appearance of former Mayor Sheila Dixon at Pennsylvania and North avenues, the epicenter of rioting that followed Freddie Gray’s funeral.

It was supposed to be about transportation.

Bus and rail advocates had organized a “transit tour” for Dixon, who is seeking to return to the job she resigned from five years ago amid a gift card embezzlement conviction and a host of ethical scandals.

In the wake of Gov. Larry Hogan’s cancellation of the Red Line project, Kelly Cross, of the Old Goucher neighborhood, had arranged an evening ride Wednesday on three Maryland Transit Administration modes – the subway, a bus and light rail.

But at the Penn North Metro subway stop, Dixon and her entourage (two advisors, a campaign photographer and a bunch of longtime transit geeks) were stuck waiting for the famously late and overcrowded No. 13 bus.

As they waited – it took 40 minutes for the bus to finally arrive – cellphone-snapping men and women mobbed Dixon like a rock star.

“Sheila, Come back!” “We need you!” “We need jobs – I need a job!” shouted members of the crowd as she stood on a rainy patch of sidewalk across from the riot-charred CVS drugstore.

“I am deaf,” one man scribbled on a piece of paper at the start of a written plea for help. 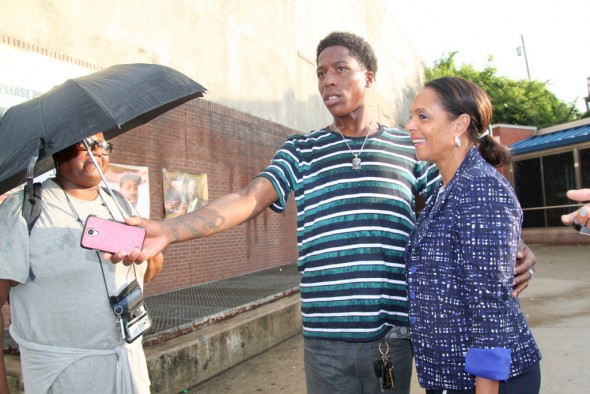 “I’m workin’ on it!” Dixon said enthusiastically, handing out her business cards, asking people to send her their resumes, urging smokers to quit (“Do you have children at home?”), and admonishing the few who made profane remarks about incumbent Mayor Stephanie Rawlings-Blake to restrain themselves (“Come on, now. That’s not necessary.”)

“April 26, 2016, brother! Are you registered?” asked Doni Glover, filming the event for his bmorenews.com publication and reminding people about the upcoming Democratic primary.

A distraught woman then rolled up in a wheelchair with a request that cried out for immediate action. And Dixon – out of compassion or, as cynics would say, recognizing campaign gold – acted.

The woman, whose leg was amputated, was trying to get her Social Security check cashed, but couldn’t get into the only check-cashing place still open in the area at that hour because it was not wheelchair-accessible.

Ace Cash Express, the woman said, would not allow someone else to carry the check and her identification inside and retrieve her money for her. 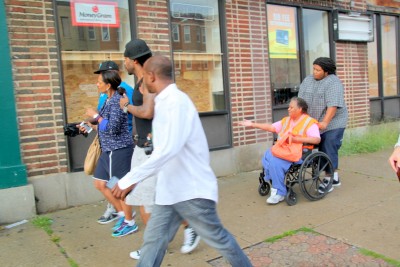 Sheila Dixon attempts to help a woman cash her Social Security check at a store that was not accessible to wheelchair users. (Photo by Fern Shen)

An Ace employee had insisted that only the woman herself could cash the check.

“I need the money. I don’t have any food for tonight,” the woman told Dixon, her eyes wet.

With still no bus in sight, Dixon led the woman and a man pushing the wheelchair across North Avenue.

Inside the store, the former mayor apparently tried to persuade the employee to cash the check. Dixon said the employee refused. (We didn’t witness this: The Brew was asked to leave the store.) 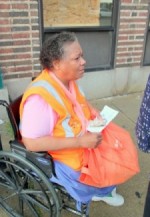 Dixon gave the woman some money for food after she was unable to help her cash her check. (Photo by Fern Shen)

Back out on the sidewalk, Dixon handed the woman her check back and said she was sorry, but the employee hadn’t budged.

Digging into her purse, Dixon peeled off two $5 bills and gave them to the woman, urging her to use the money for food.

“And get some of these men around here to pick up your wheelchair,” Dixon added, with a look of disgust.

“All these men around and no one will help her.”

Friendly greetings and encouragement followed Dixon throughout her two-hour tour – as did sharp examples of the serious problems residents face with the city’s mass transit system.

Most notable was the slowness of the trip, which according to the MTA schedule should have taken 70 minutes and instead took 120.

The group went by subway from the Charles Center to Penn-North Metro stations. Then by bus across North Avenue to the North Avenue light-rail junction.

They took light rail to State Center, then boarded the subway for the return to Charles Center. 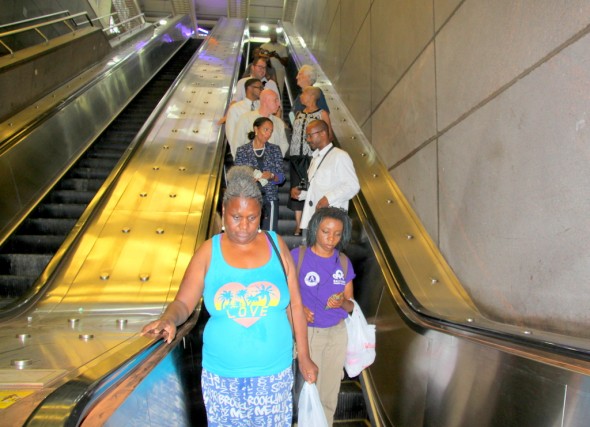 Dixon and others head down the Charles Center Metro Station escalator. (Photo by Fern Shen)

Along with system-wide lack of connectivity, another of the problems the group pointed out to Dixon along the way was the lack of a real-time illuminated sign at the Charles Center Metro platform to tell riders when the next train would arrive.

(Other cities, including Washington D.C., have these. Baltimore’s signage just tells passengers the date and time.)

While standing and waiting for the next train, the group could look down from the platform and see another issue for transit users: copious amounts of trash piled up in the subway ditch below. 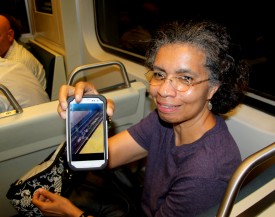 Chatting with Dixon, Cooke whipped out her cellphone to display photos she had taken of some particularly egregious subway trash she had seen on her commute.

She also talked about the damage to her car that had occurred when she left it parked at the Cold Spring Metro stop.

“My tags kept getting stolen, and my car was getting dented,” said Cook, explaining that her solution was to just walk to the station from home.

Too Crowded to Stop

As Dixon worked the crowds that gathered, the transit advocates critiqued the system among themselves.

Checking the “transit” app (created by hackers, not the MTA’s real-time system), they saw that two No. 13 were approaching, one in seven minutes, the other in 43 minutes.

The earlier one soon disappeared from the tracker. After some 25 minutes, an articulated bus rolled up, the front display panel blank, the side panel reading, “Not In Service.” But there were riders on it and, after the door opened, the driver explained that it was actually the No. 91 bus.

We finally boarded a No. 13 bus and watched out the window at the large number of would-be riders we rumbled past at McCulloh Street without slowing.

Some waved to stop the bus. Others shook their fists. At the next stop, where just two people were waiting, the bus stopped to pick them up. 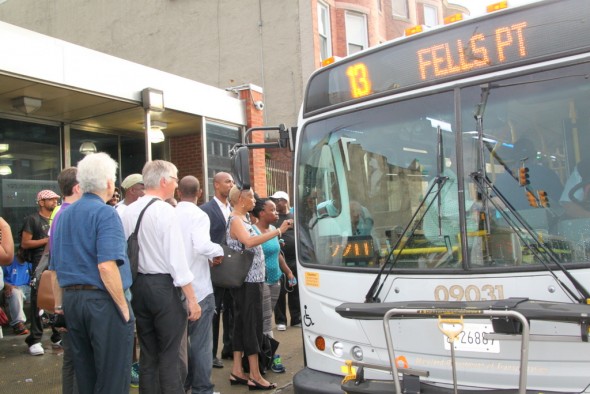 The group boards the tardy No. 13 bus on North Avenue. (Photo by Fern Shen)

We soon exited the bus and made our way across busy North Avenue without a light or crosswalk. From there, by Light Rail to State Center, it was another couple of blocks to find the Metro entrance.

Back at Charles Center, the east-end gates were locked, so we had yet another walk (two blocks worth underground) to the spot where we began.

How much transit talk was there? Dixon, for one, learned how to work the fare card machine and pay her $4. (“It doesn’t take cash, huh? So this one thing covers all the modes?” she wondered).

She also heard some laments about the axed Red Line, though she stayed low-key on the topic.

“It would have been a means to provide more more opportunities,” she said cautiously to The Brew. “In hindsight it would have been great to have got it moving under the prior administration. . . but I don’t want to judge.” 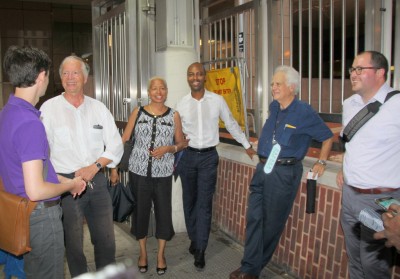 As for what’s next for Baltimore transit, Dixon said that “it appears as though they [the Rawlings-Blake administration] don’t have a planned alternative, which is part of why Kelly and others have been talking about another means to connect it through the streetcar concept.”

Cross, the Old Goucher Community Association President, has been promoting the idea of a North Avenue trolley.

“It makes sense cause there’s so much that connects to North Avenue,” Dixon said of the trolley.

Leaving the issue of Baltimore’s post-Red Line “Plan B” aside, the advocates made one point as strongly as they could: the need for better transit.

“Well and that’s households. It’s even more if you talk about people,” architect Klaus Philipsen chimed in. “So over half of the population.”

As for mayoral politics, the advocates were more circumspect.

Asked if they had concerns about Dixon’s ethical lapses, most cringed and said “yes,” but added that they also needed champions in government.

“A lot of people say, at this point, I’ll take anyone who gets it on transit,” Cross said. 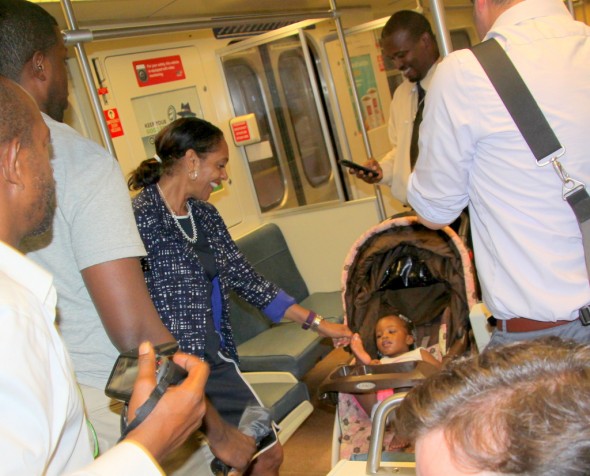 A future voter waving her foot? Candidate Dixon knows what to do. (Photo by Fern Shen)