It’s a cool evening on Conkling Street, and Nir Naya Darjee is watering a garden plot alongside her brother and parents – a raised bed with tomatoes, peppers and a tiny fig tree.

It’s a colorful scene made more so by murals on the wall behind them.

Despite being in East Baltimore, the small garden and brightly-painted walls offer the Bhutanese family a small touch of home.

“My dad will use this to make a curry,” Naya Darjee says, as she points to one of the growing leafy greens that defied ready translation.

The Darjee family are among 1,500 refugees from Bhutan who have resettled in Baltimore after living in refugee camps in Nepal.

They are part of an International Rescue Committee program called New Roots, which gives refugees access to local community gardens, so they can grow foods familiar to them and connect with fellow gardeners.

This community garden in Highlandtown grew up from two vacant lots – and the Darjees and another refugee family from Sudan are among its founding members.

Eye catching and inviting, the Conkling Street Garden was until very recently not so appealing.

“The space was an overgrown mess when we got it,” says Kevin Bernhard of the Highlandtown Community Association (HCA) that manages the garden. The two-acre parcel is owned by the Milton Electric Company and rented to the association for a dollar a year as community space. 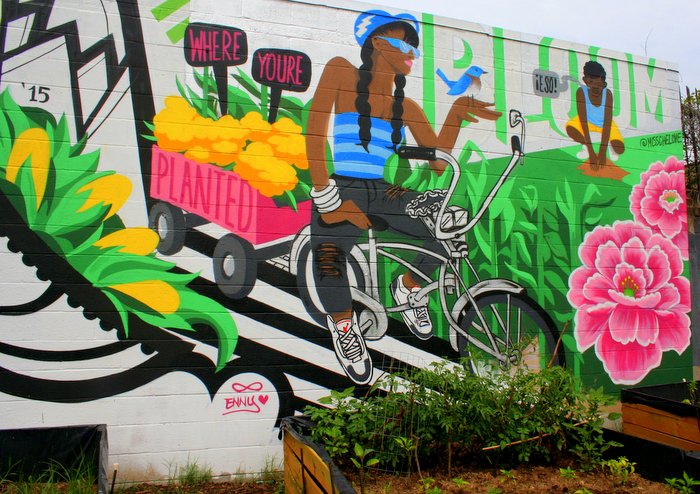 “Bloom Where You Are Planted” by Chelove and Mas Paz graces one of the walls on the Conkling Street Garden. (Photo by Danielle Sweeney)

The lots, one at street level and one on a raised rail platform, were once used by the long-closed Esskay meat-packing plant, Bernhard says. More recently, the spot was used for storage.

Milton Electric tried to keep the lots up, even hiring a handyman to beat back the weeds, but the unused space still attracted drug users, vagrants, trash, and lately, troublemakers, Bernhard says.

“Less than a year ago, a guy was living here in a tent in the dirt,” he recalled, pointing to a space where the gardeners now keep tools.

“He tried to set the corner bar across the street on fire when they wouldn’t let him buy booze and use the bathroom!”

On a recent evening, some of the lot’s new denizens, community garden members, came out to tend to their burgeoning vegetables and talk about the Conkling Street Garden’s future.

Gardener Fernando Erazo, a horticulture professor who lives across the street, said he wanted to help with the garden’s long-term growing strategy. 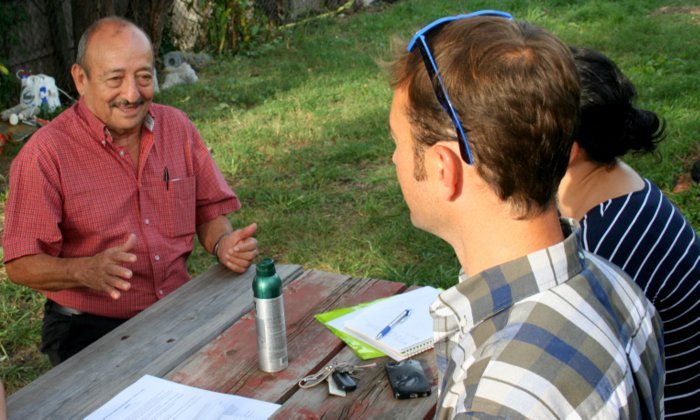 A native of Honduras, Erazo said through an interpreter that he would like to teach workshops on continuous production, so that residents could have plants in various stages of growth all the time and not just harvest in the summer or fall.

Highlandtown resident and gardener Mike Dorsey said the garden’s long-term plans do include a hoop house for year-round growing.

Erazo found out about the garden through Andy Dahl, an artist and community organizer with the Southeast Community Development Corporation, which works with HCA on the project and brought in gardeners from the International Rescue Committee.

Dahl, who speaks Spanish, says the garden space is one way to connect Highlandtown’s diverse communities. “Gardening and growing food is an interest we all share,” he said.

At home in Honduras, Erazo grew citrus, avocados, and other fruits and vegetables. In Baltimore, for the time being, at least, he has radishes, beans and chili peppers planted in his space. 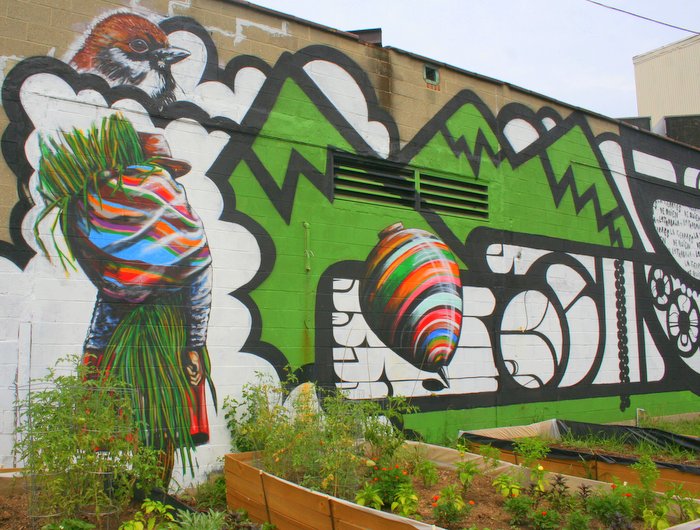 The 20 garden plots, which cost $20 each a year, are divided among local residents and a few members of New Roots.

Michael Candelario, who lives in Highlandtown and attends Patterson High School, is working at the garden this summer, cutting the grass and painting one of the storage containers with Dahl.

He has his own plot, too, and already has cucumbers, peppers, squash and basil growing.

“I just got it two weeks ago,” said Candelario, who also speaks Spanish and will be working with some of the Spanish-speaking gardeners.

Ultimately the space will include 38 plots on the lower level, possibly more on the upper level, says Bernhard. 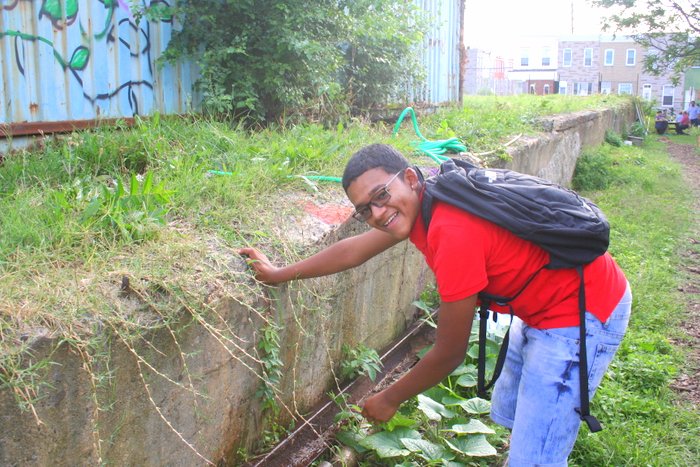 Michael Candelario, who lives in the neighborhood, waters some of the plants. (Photo by Danielle Sweeney)

With grant from the Chesapeake Bay Trust and help from Blue Water Baltimore, HCA plans to build bio-retention facilities and a rain garden.

And down the road, as the expansive garden becomes more of a neighborhood meeting space – which is part of the plan – fixed seating, grills, picnic tables, and, eventually, an outdoor movie screen and bocce court will be added.

Art has been an important part of the garden since its inception – as part of the former dump site’s transformation process, and also as a way to connect people to the newly created space.

Dahl says each artist brought his or her own vision, many incorporating some aspects of the space’s industrial history or an agricultural theme.

Artist Stefan Ways’ mural – painted on the side of the house next door to the garden (the neighbor wanted to participate) – pays tribute to the lot’s former life as a railway spur and connects it to the present.

The mural by Pablo Machioli and Mas Paz shows a Peruvian woman in the mountains carrying an aguayo, a traditional container used to carry many different things, including food.

Another part of the Machioli/Paz mural ties the themes of the other murals and garden together, saying in Spanish: “The land belongs to those who work it.” 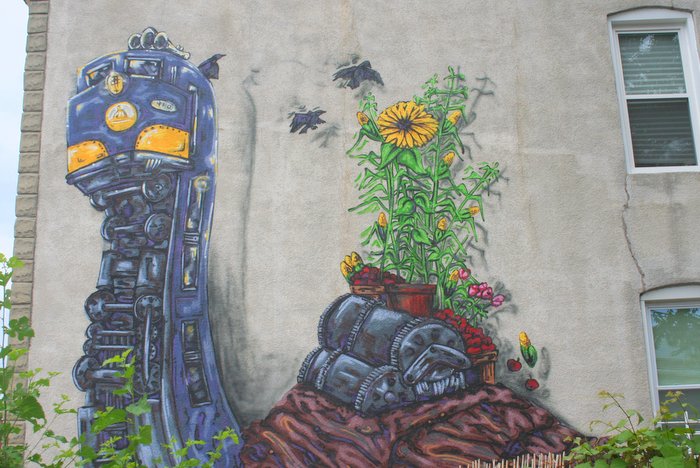 “Snail Train,” a mural painted by Stefan Ways on the side of a row house next to the garden on Conkling Street. (Photo by Danielle Sweeney)