“Congratulations, you are in the very home of racial zoning: Baltimore, Maryland,” he said to a room of about 300 community advocates and activists who had gathered at an Inner Harbor hotel to talk about reinvesting in Baltimore’s low-income communities.

Brown was referring to the fact that Baltimore was the first American city to pass an ordinance mandating that all residential blocks be segregated along racial lines.

The public health professor was giving a breakfast keynote earlier this week at the Reinvestment Summit convened by the National Community Reinvestment Coalition (NCRC) to discuss the challenge of establishing a “just economy” in Baltimore.

In his remarks, Brown summarized 100 years of policies that he said ensured disinvestment, redlining and displacement, establishing in stark terms the historical background that created many of Baltimore’s current problems.

He told the attendees, not all of whom were from Baltimore, “We’re looking at how we got to where we are today.”

The NCRC is a Washington-based organization that champions fairness in banking, housing, and business development. 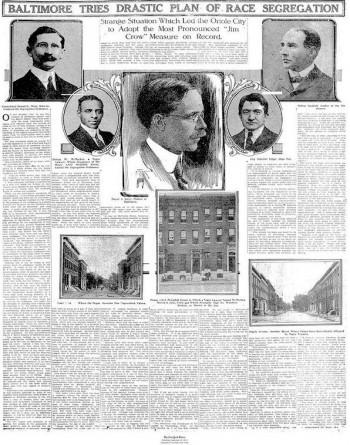 Speaking to The Brew after the summit, Brown said a key session addressed the Community Reinvestment Act.

It was a “huge piece of legislation that was designed to help fight decades of redlining,” he said. “The NCRC is the only organization that I know of that is attempting to organize communities around CRA activity so that more banks will engage in investing in historically redlined, disinvested black communities.”

“But I think the conversations should go further with deep thinking around how to implement restorative justice and reparations more broadly given the scope of damages done to entire swaths of neighborhoods and communities,” he added.

Activist Kim Trueheart said the NCRC has been working with Baltimore community organizers for a few years now.

“We’ve made comments on federal policies with their help and have worked locally on a number of issues,” she said, “particularly banks not serving low-income neighborhoods the way they should.”

She said a group of residents from Druid Heights, Howard Park, Remington and other neighborhoods have been meeting informally for about a year about the city’s reinvestment agenda and recently formed a coalition, the Baltimore Neighborhood Stabilization Alliance.

The summit, according to Trueheart, was a way to get other like-minded activists on the same page.