The billionaire who once owned the Sparrows Point steel mill, Ira Rennert, owes $8 million in unpaid city water bills as well as at least $567,000 in other charges, city officials and court documents disclose.

More than 2,000 workers lost their jobs, and the property has been leveled and is undergoing environmental remediation by new owners.

The serial owner of mining and manufacturing companies, a number of which have gone into bankruptcy under his management, Rennert has a net worth of $6.1 billion, according to Forbes magazine.

He famously built a 62,000-square-foot mansion in the Hamptons that is commonly described as America’s biggest private residence.

So far, the taxpayers of Baltimore haven’t been so fortunate.

City Solicitor George Nilson acknowledged on Friday that the city hasn’t gotten a penny from two claims it filed against RG Steel following the bankruptcy of the Rennert-controlled plant.

Nilson described the recovery efforts as “challenging,” but hinted that recovery of some of the money may be possible soon.

The matter “remain[s] under active discussion but nothing to report now,” Nilson stated in an email. His office hired Venable LLP to pursue the claims, which constitute by far the largest delinquent water bill in the regional system. 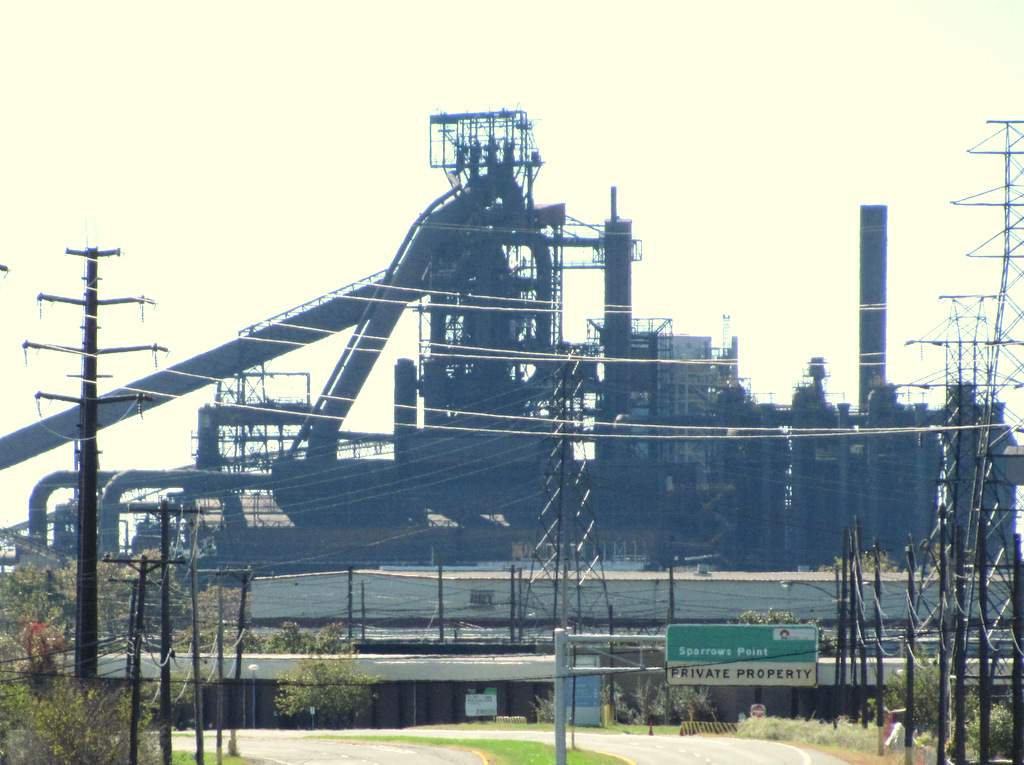 The “L” blast furnace, now dismantled, used millions of gallons of city-supplied water a day. Sparrows Point circulated the water via miles of pipes and troughs. The mill did not use harbor water because it could corrode equipment and cause streaks in finished products. (Mark Reutter, 2012 photo)

In addition to the $8 million water bill, RG Steel owes the city “at least $567,547.32 for chemical, power and effluent charges,” according to a court document filed by Venable.

These charges arise from an agreement between the city and former mill owner, Bethlehem Steel, to use upwards of 70 million gallons of treated water from the nearby Back River sewer plant.

The agreement dates back to the 1940s when Sparrows Point hired Dr. Abel Wolman as a consultant.

The noted Johns Hopkins sanitary engineer, who doubled as the water advisor to the Department of Public Works, made arrangements to supply treated wastewater from Back River to the mill.

The almost limitless supply of treated “shitwater” (so named by steelworkers because of its pungent smell) helped make possible the mill’s expansion into Bethlehem’s premier plant during the 1950s and 60s.

When Rennert’s holding company purchased a much-diminished Sparrows Point in 2011, it inherited the water system and a complex web of fees for processed and fresh water, few of which were paid, according to online city records.

Rennert’s Renco Group, headquartered in Manhattan, did not respond to a request for comment about Baltimore’s water claims.

How the steel mill became more than $5 million in arrears prior to its 2012 bankruptcy without a turnoff or other penalties (which are routine in homeowner nonpayment cases) remains a mystery.

Online city records show repeated threats by the city to turn off the water supply at the end of 2011.

But that never happened.

When The Brew first reported on the unpaid bills in June 2012, Rudolph Chow, chief of the Water Bureau, declined to talk about the issue.

“I cannot discuss a matter presently in litigation,” Chow wrote in an email. Harry Black, then Director of Finance, also said his lips were sealed because Nilson’s office was handling the issue.

When this website filed a Maryland Public Information Act (PIA) request for correspondence from DPW, Finance and the Law Department related to the unpaid bills, assistant city solicitor Mark J. Dimenna responded that the city “does not have records responsive to your request.”

So the matter has remained, with no further information to be released about a water bill calculated at $5,419,106 in June 2012, rising to over $8 million today with interest included, according to DPW spokesman Jeffrey Raymond.

Rennert, now 81, is well-known for fighting adverse judgments in court. Last February, a Manhattan federal jury ordered him and Renco Group to pay $118 million for looting the former Magnesium Corp of America.

The jury heard evidence that Rennert used the company’s cash flow to help build his Hampton mansion, valued at $200 million.

Two months ago, a judge denied Rennertʼs bid for a new trial, but reduced the damage claim from $118 million to $101 million. The businessman is appealing the verdict.