Preservationists upset about the recent demolition of a historically significant rowhouse in Marble Hill took their concerns to the City Council, asking for help in saving buildings associated with the area’s civil rights and African American histories.

In testimony before a Council committee yesterday, one activist presented evidence that Bethel AME Church may have broken a 1977 agreement it made with Juanita Jackson Mitchell to preserve the house it tore down at 1234 Druid Hill Avenue, the former residence of Baltimore’s first black City Council member.

He said he intended to go to court in an attempt to block demolition of the rowhouse at 1232 Druid Hill Avenue, which he said is also threatened.

The setting for the comments was a meeting of the Council’s Judiciary and Legislative Investigations Committee, which had scheduled a hearing to discuss an ordinance about demolition of city-owned buildings.

The bill, introduced by Councilman Bill Henry, would require city administrators to get Council approval before they can tear down a non-residential building owned by the city.

Two people came to the hearing and asked to testify. Instead of focusing on city-owned buildings, both talked about Bethel AME Church’s demolition of the Marble Hill house.

Besides serving as the home of Harry S. Cummings, the first black member of the City Council, the house was used as offices and a meeting place for the Baltimore chapter of the NAACP and others.

As such, it was visited by civil rights leaders such as Martin Luther King Jr. For many years time, it was known as the “Freedom House.” According to neighbors, it had been vacant for at least five years before it was razed last month by the Bethel AME Church.

Despite its links to civil rights pioneers, the building was just outside the boundaries of the Marble Hill historic district and had no protection as a city landmark.

Had it been in the historic district, city officials say, the church’s demolition permit application would have needed approval from the preservation commission, and that would have triggered a public hearing. 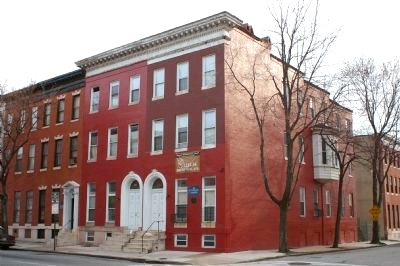 The church paid $5 for the property, according to the deed.

Cheatham provided a copy of the deed dated January 3, 1977 that stipulated that the church “use the said property as a center for the religious, educational, economic and social uplift of the people in the City of Baltimore.”

Furthermore, the church agreed in the deed to call the property “The Dr. Lillie M. Jackson Freedom House.”

If the church “violate[s] any of the aforesaid covenants, conditions and restrictions,” the deed stated, the property shall revert to Juanita Mitchell (who is now deceased) or her “personal representatives.” 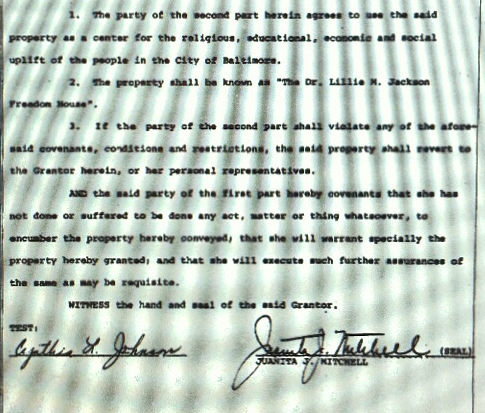 Copy of the 1977 deed between Juanita Mitchell and the Bethel AME Church specifying the intended uses of the building. (MdLandRec.net)

Cheatham said he is working with a lawyer and plans to go to court in an effort to block demolition of the house at 1232 Druid Hill Avenue, which is also owned by the Bethel AME Church.

Cheatham said the city housing department has issued a demolition permit for that property but the church hasn’t picked it up yet.

Helena Hicks, a longtime civil rights activist, questioned whether the city should have issued a demolition permit if it violated the terms of the deed. “Juanita Jackson Mitchell wanted to preserve African-American history,” Hicks said.

Beyond the one building, Hicks said to the Council, “We need a way to make sure this does not happen again. It could happen in any part of the city. We need some public policy. We need to come up with something.” 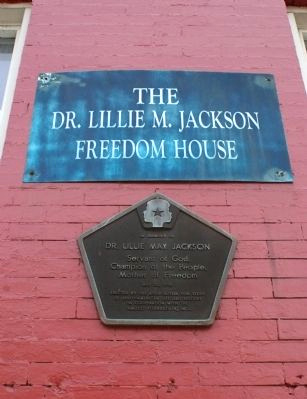 Side of building facing Druid Hill Avenue in 2008. (Photo by Christopher Busta-Peck)

Reid has drawn criticism for not meeting with preservationists about the demolition or sharing his plans with the community ahead of time.

Reid could not be reached after yesterday’s hearing. A woman who answered the phone at the church said he was not available.

Cheatham and Hicks said they plan to work with community residents to expand the boundaries of the Marble Hill historic district as a way of giving more buildings landmark protection through the Commission for Historical and Architectural Preservation (CHAP).

Councilman Henry, who sits on CHAP, suggested that more Marble Hill buildings could be placed on a “special list” that immediately gives endangered buildings temporary protection from the wrecking ball.

Under CHAP’s procedures, if a building is put on the emergency list, that gives preservationists six months to try to work with the owner to give the building additional protection, perhaps by renovating it or adding it to the city’s permanent landmark list.

As far as Henry’s bill was concerned, the panel voted to bring it out of committee, with amendments, and up for a vote by the full Council. 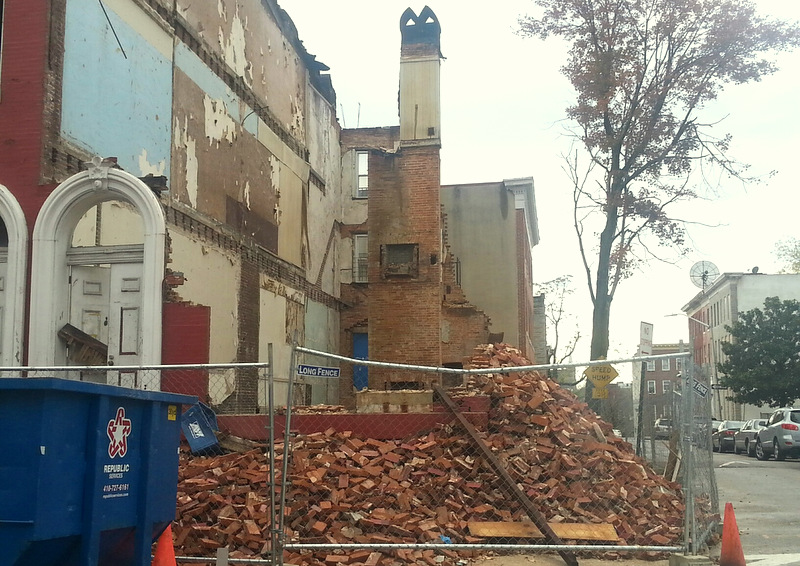 Last Friday the front door of the Jackson “Freedom House” opened up to a pile of rubble. (Photo by Ed Gunts)