Today and tomorrow Mayor Stephanie Rawlings-Blake will be celebrating five years of “turning vacants into value” at a summit and expo at the Baltimore Convention Center.

It’s not the first time that the mayor has pronounced her “V2V” initiative a success. Over the years, the mayor has honed a distinctive approach to selling the program’s alleged virtues.

Her staff arranges a “demolition event” at a planned take-down site where the mayor, Housing Commissioner Paul Graziano and a select group of neighborhood people speak glowingly about the city’s progress in ridding itself of vacant and abandoned houses.

Then up on stage comes Pless B. Jones Sr., Baltimore’s “demolition king.” The president of P&J Contracting clambers onto one of his excavators, swings back the boom arm and delivers a thumping blow to a half-collapsed building as the mayor and other onlookers cheer.

It’s a funny way to extract value, this turning of a building to dust, but it looks good to TV viewers, like something is being done.

At the convention center, the mayor and her staff will host a group of speakers and promote a raft of exhibits by non-profits, city agencies and other parties involved in the V2V process.

The problem with all this inspirational chatter is that very little factual information is ever presented about V2V results – namely, how many vacant buildings have been rehabbed under the program or, alternately, rubbed out by Jones and his cohorts.

A report issued by The Abell Foundation provides welcome relief from the guessing game. According to author Joan Jacobson, a veteran journalist, the problem starts with determining the number of vacants that exist in Baltimore.

The housing department minimizes the number of vacants by counting only unoccupied buildings that have obvious external damage such as broken windows, open doors or holes in the roof. 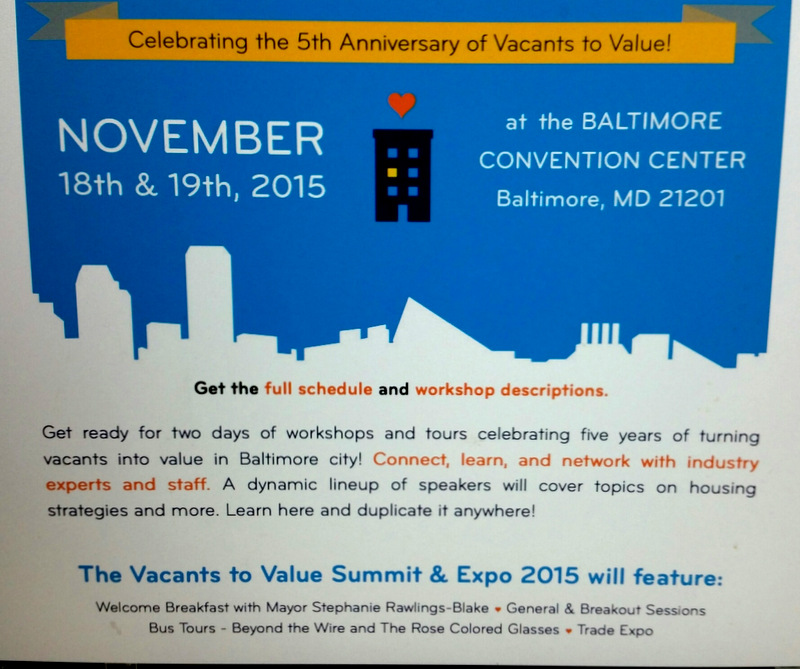 “Celebrating five years of turning vacants into value in Baltimore city!” enthuses the promotional material for this week’s mayoral summit.

“Notably,” writes Jacobson, the department does not count buildings that are “unoccupied but do not have obvious indications of decay.”

At the end of last year, Housing said 16,636 buildings qualified as vacant. (As of yesterday, the city’s Open Baltimore website lists 16,885 buildings as vacant.)

By contrast, the U.S. Census Bureau counts a dwelling as vacant if no mail has been delivered for 90 days. The bureau also counts by dwelling unit, while the city counts apartment buildings and multifamily houses as single properties.

Using the federal measure, 46,782 dwelling units in Baltimore were identified as vacant in the 2010 census.

Coming in between these two extremes, the Baltimore Neighborhood Indicators Alliance, a research group at the University of Baltimore, estimates there are 31,370 vacant properties, Jacobson reports.

So how many properties have been rehabbed and re-occupied thanks to V2V, which offers a host of tax credits to interested buyers?

Once again, the numbers are unclear.

In preparation for this week’s V2V summit, the mayor’s office has been using the figure of 2,500 former vacants as either renovated or “under renovation.”

Jacobson says that’s quite a stretch. Because many vacants are “under renovation” for years, Jacobson obtained a list from the housing department of 1,585 properties whose renovations were completed between 2010 and 2014.

Looking at the history of the properties, Jacobson found that at least 700 of them – just under half – were renovated outside of the parameters of the V2V program, mostly by private investors.

Last week, the mayor offered this twitter assessment of the V2V program in Oliver.

These included 416 properties that were given building permits before V2V was started and 22 properties, including auto repair shops and hair salons, that never were intended to be residences.

“They seem to have thrown everything they had into that 1,585 figure,” Jacobson told The Brew.

A week ago, the mayor bragged that V2V’s greatest success story could be found in Oliver, a community east of Greenmount Cemetery.

“Due to @BmoreV2V, Oliver has seen a 40% reduction in vacants, and now is a safer and more stable neighborhood,” the mayor tweeted.

By Jacobson’s count, 118 vacant houses have been restored in Oliver. But more than 580 houses continue to be vacant in the neighborhood, according to the housing department’s own count.

In other words, V2V has made a dent in Oliver vacants, but abandonment remains five times bigger – and is growing. An independent group that surveyed Oliver and another community last year found there were 42% more vacants than reported by the housing department, Jacobson said.

Outside of Oliver, the reach of the V2V program is quite minimal. In McElderry Park east of the Johns Hopkins Hospital, 84 vacants have been rehabbed and occupied. There have been 66 restored rowhouses in Greenmount West, 51 houses at Belair-Edison, 44 in Edmondson Village, and 33 in Frankford.

The net result is this: Even when the rehabbed houses are combined with the 1,600 buildings that have been torn down since 2010, abandonment continues to increase. It has gone up from 16,000 vacant housing notices in 2011 to 16,885 vacant notices today. 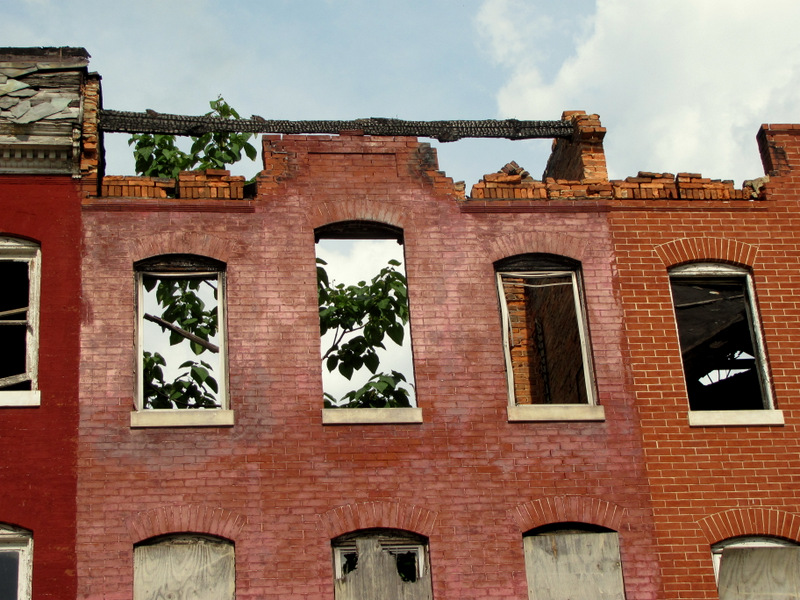 Across vast stretches of Baltimore, this is the look of the city’s housing stock. (Photo by Mark Reutter)

The Abell report talks about the lack of private investment in the inner city, the difficulty that individuals have in getting mortgages from banks, bureaucratic red tape and limited city resources.

It recommends that local government partner with non-profits and others to increase the available pool of funds to rehab vacants, develop better support systems for homebuyers interested in purchasing V2V properties, clean up the program’s abysmal record-keeping, and create a board to review policies and advocate for better results.

These would be good suggestions for a program that works. They appear wholly inadequate for the task of reversing 60 years of depopulation in Baltimore.

Vacant houses are the outcome, not the cause, of decades of economic decline. Tens of thousands of blue-collar jobs vanished from this city since 1960.

The core problem with rehabbing Baltimore’s vacants is this: How does one obtain value from a house that costs many times more to restore than its market price? Add to this conundrum the fact that most vacants are in areas with plummeting property values and limited appeal to any newcomer.

The answer is there is no value from vacants without heavy private demand or heavy public spending.

Mayor Rawlings-Blake has chosen to wrap a bundle of piecemeal, highly subsidized housing programs into a snappy-sounding tag line. The Abell report is a call to the mayor and the housing department to get real.

[DISCLOSURE: The Brew receives grant funding from the Abell Foundation.]