Over the last five years Baltimore intentionally discharged 335 million gallons of sewage mixed with stormwater into the Jones Falls – and ultimately the Inner Harbor and Chesapeake Bay – but failed to report nearly all of the releases to the public or the Maryland Department of the Environment, as required by state law.

This unsavory spew, shooting out quietly during rainstorms, comes almost entirely out of two “Sanitary Sewer Outfalls”  that were ordered closed by 2010 as part of the federal consent decree, but are still open, according to the Environmental Integrity Project.

One of them, SSO #67, near the Baltimore Streetcar Museum at 1901 Falls Road, had a foul fecal odor when a reporter stopped by on Sunday. The other outfall, SSO #72, is located at 428 East Preston Street.

Information on the huge unreported overflows – 15 times more than what was reported to the public – was obtained through a Maryland Public Information Act request by the Environmental Integrity Project as part of its troubling new report about the city’s sewer system.

The report shines a spotlight on Baltimore’s old and famously failing sewers, with the deadline for the city to comply with a 2002 federal consent decree just weeks away and less than half the work completed, according to the D.C.-based group’s calculations. 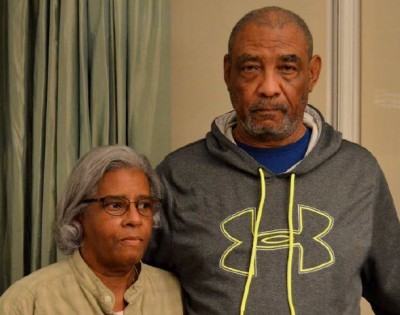 Brenda and George Johnson suffered two sewage floods in their basement in 2010 and 2011. (Environmental Integrity Project)

Why has so little been accomplished in 13 years, during which time the city has spent $700 million on projects to correct the problem and have tripled water and sewer bills for city residents, raising $2 billion?

The report, which includes emailed responses obtained from city, state and federal officials, tries to answer these questions and more.

It also illustrates what’s at stake, with data on fecal bacteria spikes in the harbor and personal accounts of residents from across the city suffering from backed-up toilets and foul-smelling flooded basements.

“This work needs to get done as quickly as possible to stop sewage from spilling into the harbor or flooding Baltimore basements.”

The 27-page report, “Stopping the Flood Beneath Baltimore’s Streets” by the non-profit Environmental Integrity Project, was funded by  The Abell Foundation. (Disclosure: The Brew receives funding from Abell.)

The official responses to the authors’ questions are telling.

Why no reporting from the two sewage outfalls (Nos. 67 and 72) where most of the overflows are occurring?

State law has detailed sewage overflow reporting requirements, including that press releases must be issued and an online database must be updated. But the Department of Public Works did not follow these requirements in the case of the two outfalls.

“Since the beginning of the consent decree, they (SSO #67 and SSO #72) have always been treated differently from other overflows because they are operating as designed,” said Dana Cooper, chief of legal and regulatory affairs at the city Department of Public Works.

Essentially, Cooper was saying, since the releases are intentional, they do not need to be reported.

DPW did not respond to detailed questions sent over the weekend by The Brew. A spokesman for MDE did provide a short response.

The two outfalls “were built long ago to allow for overflows during wet weather to protect against backups of sewage that could cause property damage and threaten public health and to protect the operation of the sewage treatment plant,” MDE’s Jay Apperson said.

“Everyone knows that this can be a challenging and expensive problem to solve. We are working on an amended consent decree that takes into account the logistical challenges while insisting on continued environmental progress,” Apperson wrote.

As The Brew has previously reported, the city is negotiating with MDE and the EPA for an extension on their deadline.

Asked to confirm the report’s contention that the city is seeking a 10-year or longer break on the deadline, Apperson did not respond. 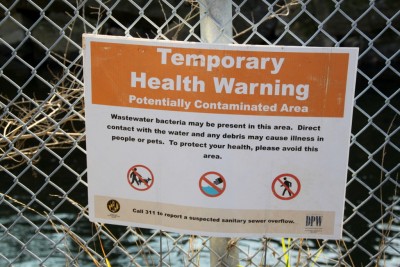 The Environmental Integrity report is calling for the city to be given no more than five years to meet the decree’s current requirement to “eliminate all” overflows and spills by January 1, 2016.

“Extending the deadline a decade or more will mean too much stress and hardship for homeowners,” the report’s authors argue, adding:

“The Waterfront Partnership of Baltimore has called for a ‘fishable, swimmable’ harbor by 2020. That will be impossible if the city continues to pipe sewage into the harbor after 2020.”

Asked by the report’s authors to comment on the data, Johns Hopkins University water quality expert Edward Bouwer said the fecal bacteria counts are so consistently elevated that Baltimore should erect signs warning of a health threat at the Inner Harbor.

“Then people would be able to avoid direct contact with the water,” said Bouwer, chairman of the Department of Geography and Environmental Engineering.

“These exceedances are really high,” Bouwer said in the report, noting that kayakers and boaters in the Inner Harbor “have no idea” of the hazards contained in the water.

Water quality monitoring by Baltimore shows consistently unhealthy levels of Enterococcus bacteria and no significant improvement between 2009 and 2014, according to the report’s findings.

Here are some specifics cited by the report:

• At the Inner Harbor near Light Street, water sampling between April 1, 2009 and December 10, 2014 found that 35% of 128 samples had Enterococcus bacteria at concentrations that would be unsafe for boaters or kayakers. (To be precise, they exceeded the saltwater standard of 500 MPN/100 mL.)

• More than half of the samples there exceeded the standard for fresh water (151 MPN/100 mL).

• Near Lombard Street on the Fallsway, the levels were worse – 92% of 124 water samples taken during roughly the same time period exceeding the freshwater standard.

Basement Sewage: “It was Horrendous”

The Baltimore Law Department received 413 claims for damage cause by backed-up sewers from 2012 to 2015, according to the report, but only 38 of them (9%) have been paid.

One of the many homeowners whose claims were denied are Brenda and George Johnson of the Glen neighborhood in Northwest Baltimore.

They suffered two sewage floods in their basement in 2010 and 2011. Brenda Johnson, a retired teacher, told Environmental Integrity that sewage erupted like a geyser from her toilet and shower drain for hours in the first incident. 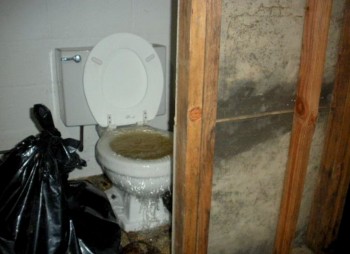 Overflowing toilet at the Johnson’s home, which continued for hours. (Environmental Integrity.)

“It was horrendous and it took us forever to get it cleaned up,” she said.

The report outlines the tasks completed by the city so far to comply with the 2002 Consent Decree, including:

•  Replacing (or lining with a plastic material to prevent leaks) 163 miles of sewage pipes, or about 39% of its goal of 420 miles.

•  Eliminating 60 of its 62 sewage overflow pipes that release waste into waterways.

• Increasing the capacity of the Jones Falls Pumping Station from 33 million to 55 million gallons a day.

• Designing and constructing a new pumping station on Stony Run.

• Completing an inspection and assessment of its eight neighborhood sewer drainage areas.

Despite this progress, overflows of raw human waste into city streams and the harbor continue.

The report said that more than 400 overflows and spills were reported this year, totaling 42 million gallons. What’s more, according to the report, DPW has repeatedly broken the terms of the consent decree, with 1,258 violations between 2009 and 2013.

But how to explain the failure to complete the more than half of the required work in the required time? Various officials responded in the report.

Haggling over the scope of the project, which lasted for a solid decade, was one main reason the authors uncovered.

The city designed plans for a series of pipe replacements and linings that could upgrade the system to handle about three inches of rain in a 24-hour period.

EPA rejected the plans, however, saying that the city should design a system that could handle five inches of rain in 24 hours.

DPW’s Cooper blamed the EPA, saying, “We turned in our last plans in 2008 and then did not get a response [from EPA] until 2011, at which point they said, ‘Go back to the drawing board.’ ”

The EPA, meanwhile denied that it caused the delay, with an agency spokesman telling Environmental Integrity that slow action by the city was the cause.

Another explanation from Baltimore officials: In hindsight, the deadline they agreed to was too ambitious.

“Looking at the magnitude of the sewage and polluted stormwater, I would say it was unrealistic,” Wazir Qadri, engineer supervisor at DPW, said. “We need more time to do the work because this system is a big system.”

“Hydraulic restriction” at Baltimore’s Back River Wastewater Treatment Plant was another reason that city officials gave for the delay.

A century-old 12-foot diameter pipe, officials discovered, had either sunk too far into the ground over many decades or had been built wrong. As a result, the main pipe entering the plant is about four feet too low.

“That restricts the size of the opening and causes a pool of sewage four feet deep that routinely backs up 10 miles under the city,” a DPW official explained during a sit-down interview with the authors.

If they closed outfalls 67 and 72, the DPW’s Cooper told the authors, “then the most likely place the sewage is going to go is into people’s basements.” Fixing the Back River plant problem is not a mandatory project in the consent decree but it should be, the authors say.

Here’s what officials told Environmental Integrity to explain what has been done about fixing the Back River problem so far:

“Because re-routing and replacing the deeply-buried pipe would be too difficult, the city is planning to build a pumping station to pump sewage around the restriction and construct 36-million gallon holding tanks to capture overflow.

“The city put this ‘hydraulic restriction’ project out to bid in the summer of 2015, but the offers came in at about $450 million – $100 million more than the city was willing to pay, according to Cooper of the Department of Public Works.

“So the city has gone back to the drawing board yet again and has hired a consultant to study other alternatives that might be more affordable.”

What happens in the meantime?

“As the city deliberates its next move,” the environmental group’s report observes, “the two outfalls remain open – flooding the Inner Harbor with human waste.”