The state today dismissed all charges against the seven people arrested in connection with a December protest over the state’s failure to extinguish the permit for a South Baltimore trash-burning power plant that they say has expired.

“Getting arrested was a big deal for me,” said Josh Acevedo, 19, standing with the others in the hallway after their brief appearance before District Court Judge Jack L. Lesser.

“But we had to make a drastic move. This had to happen for MDE (the Maryland Department of the Environment) to even take this issue seriously,” said Acevedo, a pre-law student at Stevenson University. “I think it has started getting them to change their approach.”

That day, as more than 100 protesters organized by Free Your Voice chanted and picketed outside MDE headquarters against the Fairfield Renewable Energy Project, two group leaders went  inside.

They met with MDE Secretary Benjamin H. Grumbles who told them he is giving Energy Answers International, the Albany-based company behind the project, until January to prove that its 2010 permit is still valid.

Free Your Voice, which had been calling for the state to extinguish the permit for months, said the Albany-based company had been given enough time.

The seven who were arrested had gone back inside the building as “a civil action,” refusing to leave the premises until Grumbles nullified the permit.

In a large show of force, multiple city police cars and vans rolled up to the Montgomery Park building, as a police helicopter swooped overhead.

Exiting through a back door, officers took the group away in handcuffs.

Near a City School

That December demonstration was the latest skirmish in a years-long battle over the proposed 160-megawatt trash-to-energy plant, to be built in Fairfield near the community of Curtis Bay, less than a mile from a city school.

A coalition of community, youth, labor and environmental groups has opposed the facility, saying airborne emissions would harm the environment and the community’s health.

A company spokeswoman has said the emissions would not exceed legal limits and that the facility would provide jobs and help the environment by getting rid of landfill-clogging refuse.

The activists have pressed MDE to cancel the permit for the project, saying it has long ago expired because no substantial construction has taken place there since October 31, 2013.

Under the terms of the Certificate of Public Convenience and Necessity, the permit lapses if no substantial work has taken place at the site for 180 days.

After thanking their attorney, Peter Sabonis, today, the seven activists decided to, in effect, pick up where they left off. They headed back to MDE headquarters, brandishing the nearly 2,000 petitions they had wanted to leave there in December. 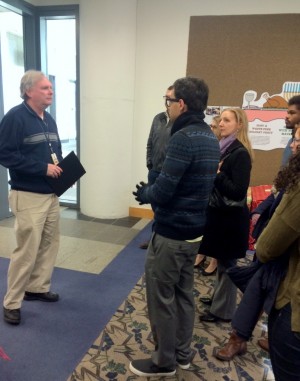 MDE’s Jay Apperson speaks with Josh Acevedo and other members of Free Your Voice. (Photo by Ivory Thomas)

Standing in the lobby of the same building where they’d been arrested a month ago (leading to a night they spent at Central Booking), the group asked to see Grumbles.

They ended up handing the petitions not to Grumbles but to someone they thought was an MDE official involved in the decision-making.

“We’re reviewing the information submitted by the company and we’ll make a decision soon,” the man said.

Cherkis asked “How soon is soon?”

When they realized they’d been speaking with MDE spokesman Jay Apperson, from the Office of Communications, they asked for someone else to come and talk to them about the license.

They waited for about an hour, at which point Apperson returned and told them pretty much the same thing.