After living in the Mount Vernon historic district for nearly 40 years, Eva Higgins has seen her share of art installations and temporary sculptures.

But Higgins says she’s never seen anything quite like the metalwork that surrounds the church at St. Paul and Chase streets.

For the past 2½ years, the base of the New Refuge Deliverance Cathedral has been surrounded by yellow and red scaffolding that takes up much of the sidewalk and blocks views of the handsome stone church.

Usually scaffolding around a building is a sign that a construction project is underway. But no work is visible at this prominent corner.

“That scaffolding has been up for an eternity, and it’s a public nuisance,” Higgins said while walking her dog Wiggles.

To have scaffolding blocking the sidewalk for so long makes the whole neighborhood look bad, said Nick Piscatelli, the owner of a house a block away.

“There are rules for maintaining buildings, which owners have to follow,” he said. “Whatever is in violation, they should have to fix it.”

Previously known as Christ Church, the building was built after the Civil War and features a soaring bell tower and round stained-glass window on the Chase Street side.

It was home to an Episcopal congregation for most of its history. A local businessman reportedly purchased the Belvedere Hotel on the same block of Chase Street because he loved the sound of its bells.

Window openings in the bell tower are missing glass. Window frames are down to the bare wood. 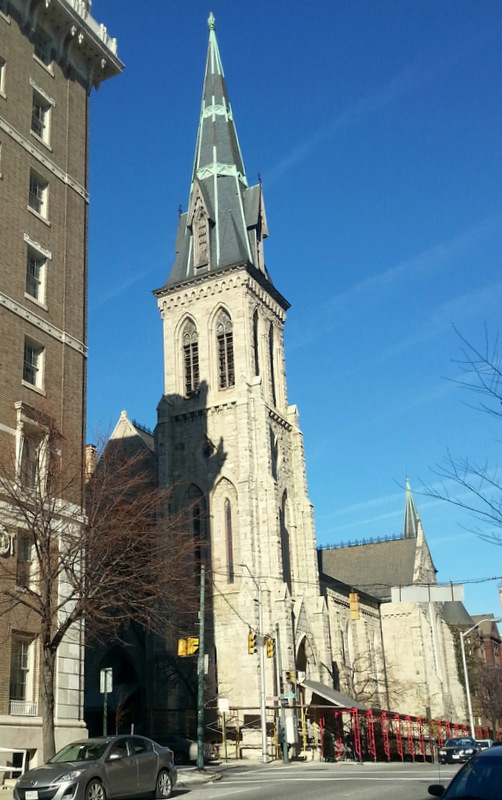 For over 100 years, the church’s soaring bell tower has been a Mount Vernon landmark. (Photo by Ed Gunts)

Cornice pieces are missing. Slate shingles have fallen from the roof.

Darrell Bishop, a condominium owner in Mount Vernon, said he registered dozens of complaints with the city after he was nearly hit by a piece of falling slate.

“It missed me by three feet,” he said during a walk around the building. “It landed in a tree pit. It could have killed someone.”

Bishop said he believes owners have an obligation to maintain their properties, especially in a historic district. “If you can’t afford to maintain a building, you shouldn’t own it. That’s what makes slums.”

Jason Curtis, past president of the Mount Vernon Belvedere Association, agrees. He said the community has asked the city to take action against the owner for years.

No Response from Church

The senior pastor and CEO of the Pentecostal congregation is Naomi C. DuRant (to whom the city has commemoratively named the unit block of East Chase Street “Bishop DuRant Way”).

She and other church officials did not respond to phone requests over several weeks seeking comment about the scaffolding and community complaints.

A lawyer who had represented the church, Robert F. Dashiell, said he is no longer working with the church. 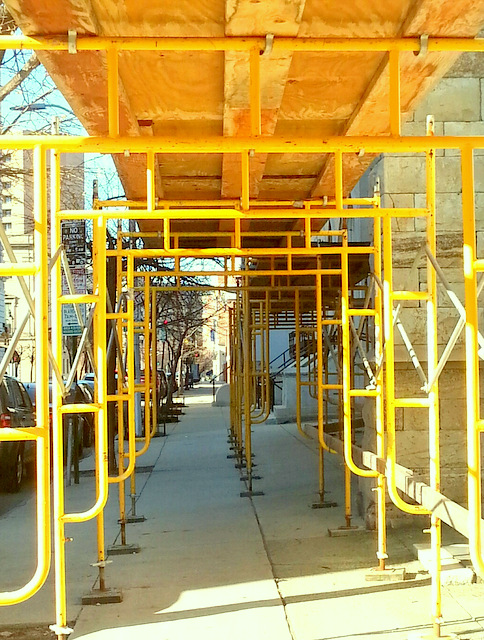 The scaffolding was erected by the city to protect pedestrians from falling debris. (Photo by Ed Gunts)

According to Michael Braverman, deputy commissioner of the Department of Housing and Community Development, the city is taking steps to address the situation.

HCD, in fact, owns the scaffolding and purchased it specifically to put around the church in 2013. This was done as a safety precaution after receiving complaints that slate tiles were falling off the roof.

“It was a public safety necessity,” Braverman said, after the Commission for Historical and Architectural Preservation (CHAP) was unable to get the church to make repairs.

When the scaffolding was erected, Braverman said, the city was hopeful that the action would prompt the church to make repairs on its own.

But after more than two years with no sign of work, he said, HCD is taking more direct action.

First, he said, it has placed a lien against the building to recoup the cost of the scaffolding. At the end of 2015, the figure was more than $30,000. If the church does not pay the city, the building is subject to being included in a future tax sale.

HCD is also making arrangements to bring in contractors to repair the roof and address any other unsafe conditions related to the exterior.

Braverman said the city does not plan a full-blown restoration. He said the goal is to repair the building enough to make it safe for people to walk by. He estimated that the cost of repairs will be “in the six figures.”

When the repairs are complete, the city plans to take down the scaffolding and put a lien against the property equal to the cost of repairs.

The church will have to pay the amount to prevent the building from being sold at a tax sale. Braverman said he believes that city taxpayers will be protected because the property is worth more than the cost of repairs and scaffolding.

“We certainly tried to resolve this amicably,” Braverman said of HCD’s efforts to goad the church into action. “We’ve tried to do this in the most amicable way possible.”

Bishop said he is frustrated that such a prominent building in midtown has been allowed to deteriorate so much. “The whole thing is a sad, sad situation.” 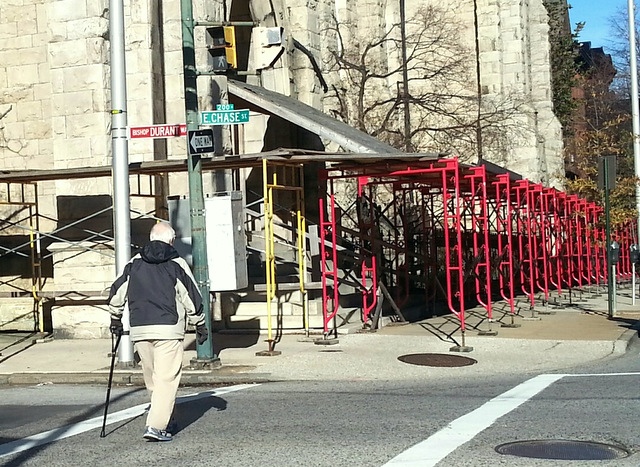 A man approaches the St. Paul Street side of the stone church. The unit block of East Chase Street is named after the congregation’s senior pastor and CEO, Naomi C. DuRant. (Photo by Ed Gunts)