Singing and marching down Fremont Avenue from the Poe Homes public housing complex to the University of Maryland BioPark, the demonstrators traveled just three blocks but that distance represented a vast gulf in wealth and power.

The protest by about 40 people on Tuesday was in response to the recent $17.5 million (TIF) tax increment financing subsidy awarded by the City Council to the company expanding the Biopark’s campus on the edge of struggling West Baltimore.

As part of the deal,  the developer agreed to sign a Community Benefits Agreement with an umbrella group of neighborhood associations, a document the City Council members involved have trumpeted as “a model.”

They estimate the agreement is worth $4 million over time and say it will help ensure that surrounding neighborhoods benefit from high-end development.

But the protesters, organized by the Committee of Concerned Citizens Inc., say that the terms and financing of the agreement are vague and that enforcement mechanisms are weak. Provisions that would have created specific job training programs and ensured the hiring of neighborhood were not included as promised.

They also say that two groups (the Poe Homes Tenants Council and the Commercial Business and Property Owners of West Baltimore Street) were left out of the agreement. 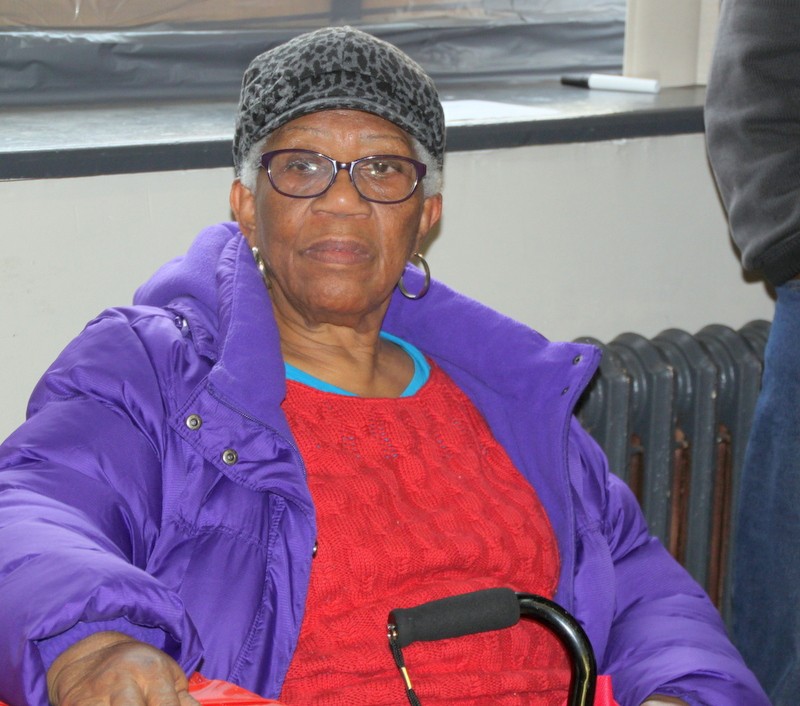 On display was deep distrust of city government and the University of Maryland after what the group said was years of failure by the institution to make good on assurances that new city-backed development will improve the lives of longtime residents.

“Why do we keep letting them add us into their project? Once they get the money, they say, to hell with us!” said Lorraine Ledbetter, president of the Poe Homes Tenants Council since 1985.

“This is not about the money, this is about people who don’t want to hire blacks,” Ledbetter said, speaking at a rally before the picketing.

Also addressing a crowd assembled in a Poe Homes meeting room was Concerned Citizens vice chair Christopher Ervin, who said that a better agreement was needed, one that ensures that the only jobs residents get aren’t “mopping the floors.”

“We have to stop the transplanting of the people who are here and address the conditions they face,” said Ervin, who is running as a Democrat for the 5th District Council seat in Northwest Baltimore.

Can these agreements really address those conditions? Raising that question – and critiquing the whole approach of city-subsidized development – was the larger purpose of Green Party leaders, Democratic and Republican candidates and social justice advocates from across the city carrying signs at Tuesday’s march. 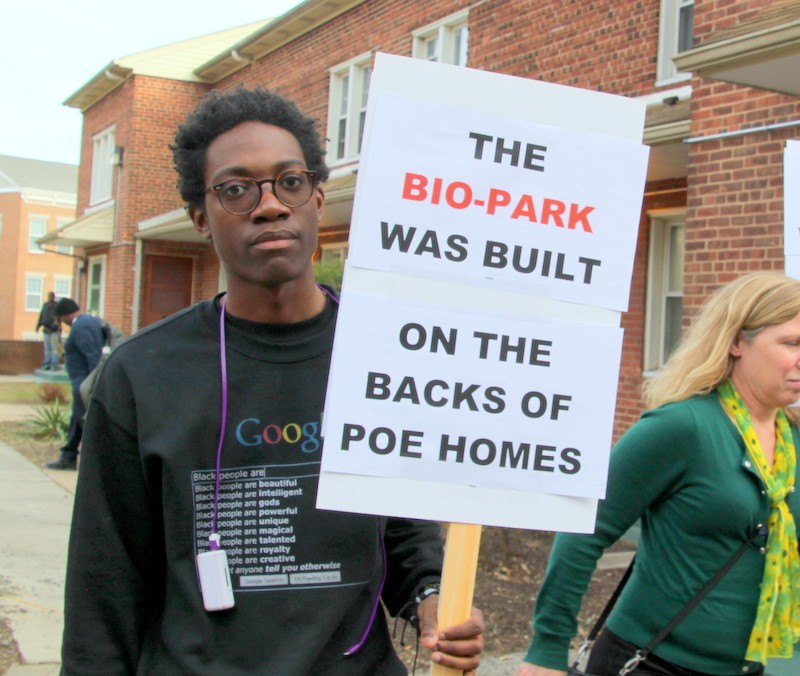 University and city police officers stood on the side and watched yesterday as longtime city activist Leo Burroughs led the loud, but peaceful, protest.

“Jim Crow must go!” chanted Burroughs, chairman of the Concerned Citizens group, speaking through a megaphone.

“What do we want? Jobs! When do we want them? Now!” the demonstrators shouted, as a youth-led percussion group banged on drums.

In a statement to the media, BioPark officials said the institution has a long history of supporting surrounding neighborhoods.

“Since 2006,  the UM BioPark, working with funds contributed by businesses in the BioPark, has invested over $400,000 in our neighboring communities of southwest Baltimore,” BioPark president Jim Hughes is quoted as saying.

“Over half of these dollars have been direct grants to the James McHenry Elementary Middle School and the Vivien T. Thomas Medical Arts Academy,” Hughes said.

He said the institution “will continue making these investments and will continue working in partnership with our neighbors.”

As with other TIFs – some of them even larger, like the $107 million Harbor Point TIF awarded in 2013 – the city will float bonds to pay costs for the project.

Such financing packages are drawing increasing criticism following last April’s unrest and the talk about “Two Baltimores,” one rich and harborside and the other poor and hidden in places like Sandtown-Winchester and Poe Homes.

The debate was heightened when city officials acknowledged that state funding formulas interpret tax-subsidized developments, such as for 873 West Baltimore Street, as reasons to cut millions in education aid to the city. 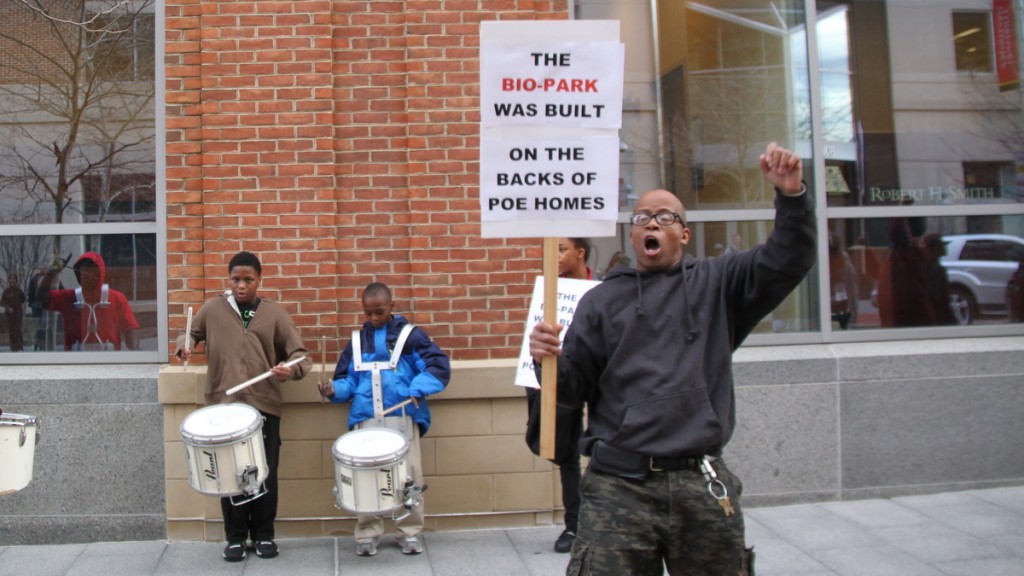 Larry Brown outside the University of Maryland BioPark on Baltimore Street. (Photo by Fern Shen)

Speakers yesterday questioned the whole strategy of awarding TIFs and other subsidies, arguing that it trades away lucrative benefits to developers while giving little back in return to residents.

“The developer did not need these funds – [the subsidy] was needed just so they could reach an acceptable profit margin,” said Joshua Harris, la member of the Committee of Concerned Citizens  and a Green Party candidate for mayor.

“We have a history of 14 years with the BioPark where they promised to create 3,000 jobs and none of those promises have been fulfilled,” he said, challenging the BioPark to “release their 990’s and back up their claims.”

But Harris’ immediate focus was Council Bill 15-0587, which his group wants to see repealed.

He said specific provisions that his group had asked to be included in the agreement were left out. They involved a job training academy in Poppleton, renovation of the James McHenry recreation center and more specific and enforceable neighborhood hiring requirements.

Harris said when Councilman Carl Stokes held a hearing on the bill in January, he and others were not allowed to speak. “We were brought into a [City Hall] side room and told how it’s going to be,” he charged, while “a whole line-up of white developers were allowed to speak” at the hearing. 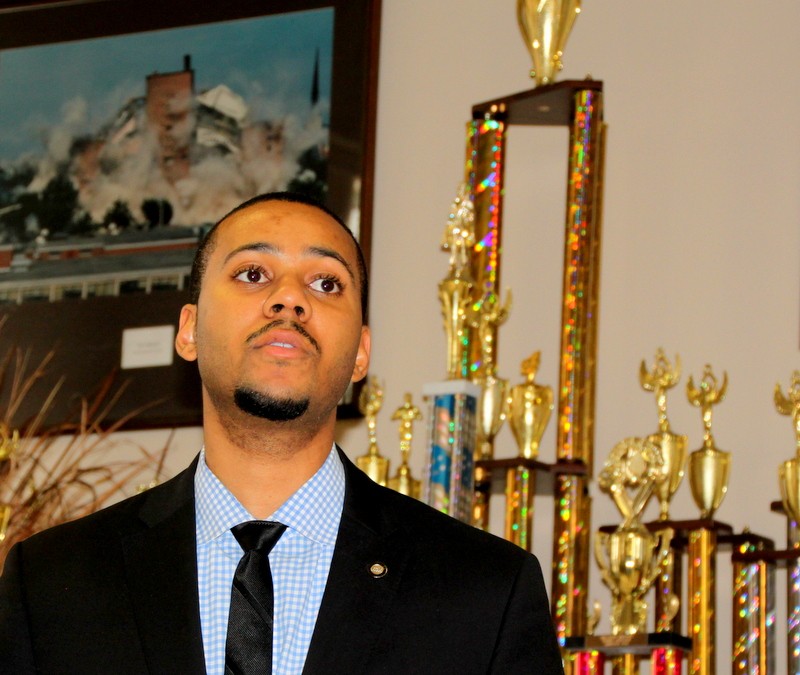 Josh Harris addresses group as it prepares to march outside the University of Maryland BioPark.
(Photo by Fern Shen)

Harris said that no one from the Poe Homes and Terraces  or the Baltimore Street property-owners group, has been given a promised seat on the funding committee that is deciding how the community benefits money will be spent.

Stokes, who is also running for mayor, said he was not in that City Hall conference room where membership on the funding committee was discussed.

As Stokes tells the story, he was “happy to hear it” when told that an agreement had been signed by the Southwest Partnership, an organization consisting of seven neighborhood groups and six anchor institutions, including the University of Maryland.

The benefits agreement that was signed, Stokes said, “was a fine agreement.”

Michael Seipp, executive director of the Partnership, was reluctant to speak in detail to The Brew about the concerns of Harris’ group without hearing them directly.

“Our process is open to everyone in the community,” he said.

As for the agreement negotiated with the BioPark developer, Seipp called it “a good starting point” and predicted that “a lot of good things will in fact flow from the agreement and benefit Poe Homes and all the neighborhoods impacted by the BioPark.”

Among the many parties represented at the protest were political candidates and their representatives.

“Without audits, and real financial accountability, we just can’t move forward with anything else,” he said, before taking up a sign and joining the protest.

A cluster of Republican candidates, including two men competing with each other for the same position, were there as well – GOP mayoral candidates Chancellor Torbit and Larry Wardlow Jr., along with City Council president candidate Shannon Wright.

“We want to voice our support, to show our support,” Wright said. “We wanted to hear what people are saying. It’s an interesting time. There’s a lot coming out now that’s really important.” 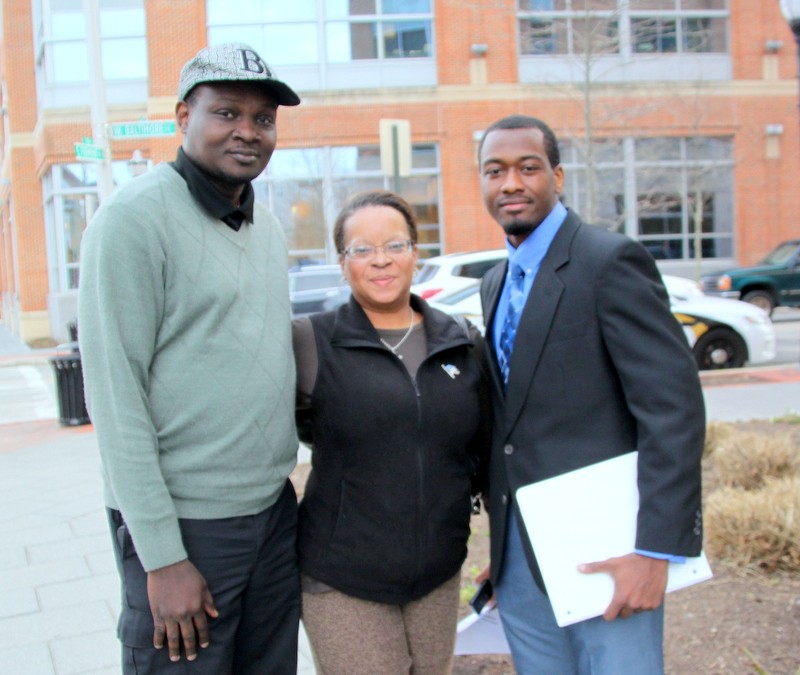 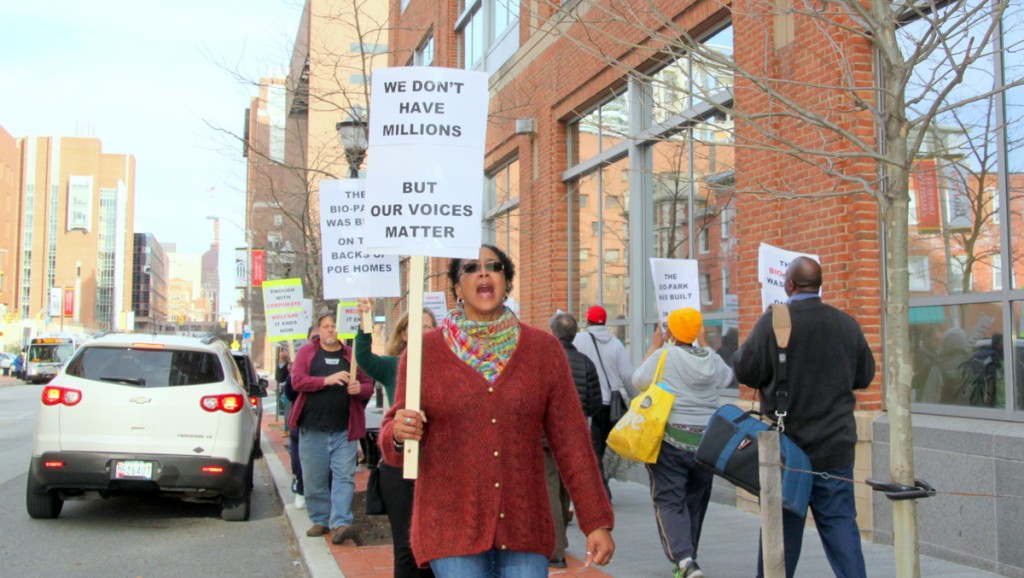 Demonstration outside the University of Maryland BioPark. (Photo by Fern Shen)