What he showed two reporters was an email using his campaign letterhead – and purporting to be from his campaign manager Mike Bland – that attacked front-runners Sheila Dixon and Catherine E. Pugh.

The email includes a solicitation to donate to Mosby’s campaign, which the candidate said leads to a dead link.

Noting the misspellings and ethnic references, Mosby said the email did not come from his campaign or anyone associated with it. But he did add this thought:

“I don’t condone some of the way folks have raised money in this race and the way they reported their financing and everything but this type of attack is shameful and has no place in this” race, he said. 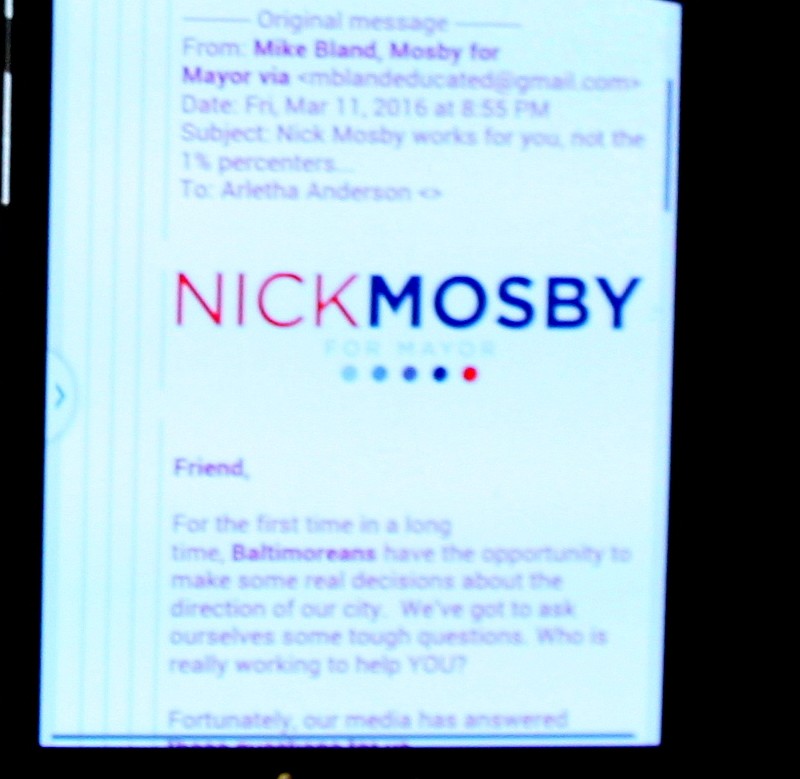 Email that Nick Mosby says was doctored to appear as if it was sent by his campaign. (Fern Shen)

He said he is turning the material over to the State Prosecutor and has asked for an investigation.

Mosby, who at first said the email was hacked from an old email account, said at the news conference that the campaign now believes it was simply doctored.

As with much else in the hotly contested race, commenters on the Baltimore Election 2016 Facebook page pounced on the Mosby announcement and speculated about it from every angle.

Cheap publicity? A stealthy way to malign his opponents? Getting out in front of a boo-boo by a staffer? A legitimate response to a real attempt by another campaign to discredit Mosby?

One participant in the discussion finally pleaded with the others to give it a rest:

“I’m no fan of the grimy political tricks. But, is there a point where speculation about a candidate’s conniving (as fun as it is) becomes inappropriate per this group’s rules?”