When election time rolls around, the Baltimore City Sitting Judges Committee always has a hand stretched out to the legal community, but lately it has been fundraising like never before.

Over the past year, the group has raised a whopping $343,429 to bolster the chances that six incumbent judges will remain judges for the next 15 years on Baltimore’s Circuit Court.

Nearly all of the contributions have come from local attorneys, many of them partners or associates of the top firms in the city.

This collective largess has made the judicial race the second biggest moneyed campaign (behind the contest for mayor) in Baltimore this election year.

What’s going on? A reason cited by H. Mark Stichel, chairman of the sitting judges slate and a partner at Gohn, Hankey, Stichel & Berlage, is the cost of mailing out campaign literature.

In an interview with The Brew, he said conventional wisdom is that you have to do a lot of fliers.

“They say mailings have to go out five, six or seven times to have some kind of impact on voters,” he said. He also noted that the judges are campaigning for city-wide positions, so mailings go all over the city.

But aside from the cost of mailings, what accounts for the outsized contributions this year by a slate that typically raises about $100,000 during an election cycle?

That reason is James B. Kraft.

After three terms as a City Councilman, Kraft, a lawyer for 35 years, has decided to use his name recognition and campaign war chest to take on the sitting judges.

The judges, who in a normal election year get rubber-stamped by voters, are worried that Kraft will sap their strength and knock one of them off the bench. Over the last 30 years, Stichel said, “No one’s been a sitting public official or had significant campaign funds like this.”

Kraft entered the race last fall with $114,720 in campaign funds and has since added $40,115, according to election board filings. He has contributed $15,000 to five incumbent City Council members, including Warren Branch, Sharon Green Middleton and William “Pete” Welch, leading to speculation that he will be promoted on their slates. Kraft did not return a phone call and message seeking comment.

Further aggravating the judges’ nerves is Todd Oppenheim, a veteran public defender who is leading a grassroots efforts (with only $6,286 in campaign cash) to be elected the Circuit Court bench.

In op-eds and speeches, Oppenheim has repeatedly described the local judicial system as biased against poor defendants and too deferential to prosecutors and Baltimore Police, whose officers are routinely named in wrongful injury and arrest lawsuits filed by citizens in Baltimore Circuit Court.

His latest example of bias is the number of city prosecutors he has seen “waving signs” at the early voting sites he has visited.

“I’ve seen one defense attorney begrudgingly standing at a poll – for favorable treatment in the future no doubt – and no less than 10 prosecutors,” he said this week. “I’ve even seen a former police officer working a poll for the sitting judges.” 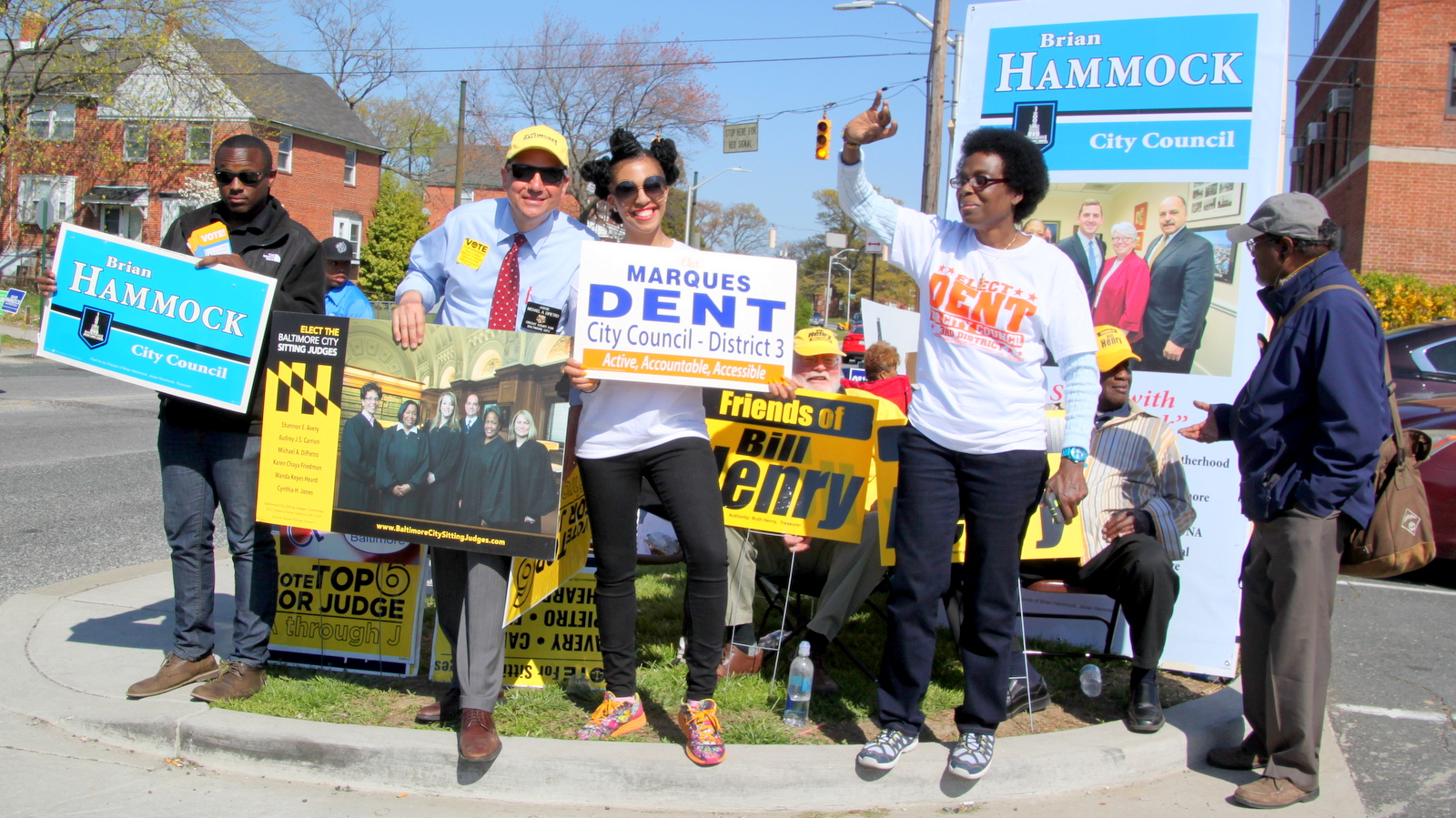 Judge Michael DiPietro (in red tie) campaigns for himself and the other sitting judges outside one of Baltimore’s early voting centers last Friday. (Fern Shen)

Ratcheting up the rhetoric is Oppenheim’s response to the recusal policy of the six sitting judges, who recently told the public defenders’ office that Oppenheim and his campaign treasurer Isabel Lipman (also a public defender) would be banned from their courtrooms.

In that case, Oppenheim asks, shouldn’t the judges also recuse themselves from cases involving attorneys who have written checks for their campaign?

Election board filings show that the judges have received hefty contributions from dozens of local law firms, including at least $14,000 from the employees of Gallagher, Evelius & Jones LLP.

The slate’s Facebook page shows the judges making appearances in a Camden Yards suite for a Baltimore Orioles-themed fundraiser promoted by George Psoros of Murtha, Psoras & Lanasa and attending a fundraiser at the Historic Ropewalk Tavern in Federal Hill.

The slate’s campaign reports are a who’s who of the legal establishment. 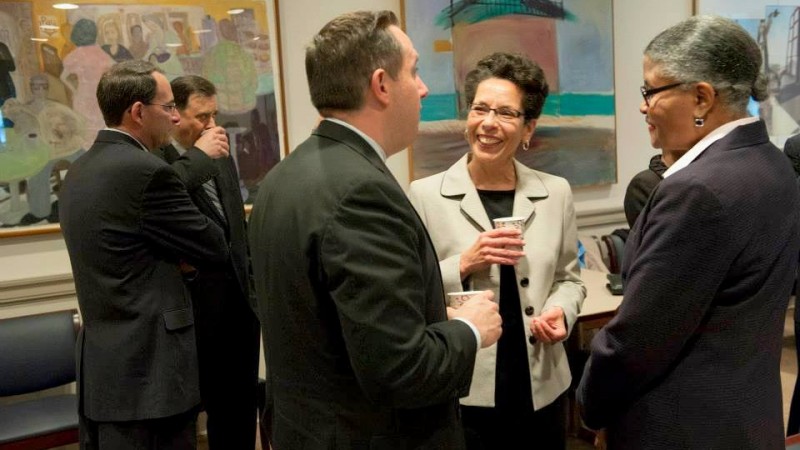 A few developers joined in with the attorneys, among them Caves Valley Partners ($2,500), Michael Klein of Klein Enterprises ($1,000), and David Cordish ($1,000 through an LLC and company officer).

Still more cash – nearly $6,000 – was handed over to the slate from seven people named DiPietro (the same surname as Judge Michael DiPietro). Another $350 came from Howard E. Friedman, the wealthy hedge-fund husband of Judge Karen Friedman.

Should the judges ban lawyer-contributors from their courtrooms?

As Oppenheim sees it, so much potential bias is created by a system of elected judges that there is no way to selectively eliminate it. “The best solution would be for everyone to come in front of them and they just be above it all,” he said.

Sitting Judge Wanda Heard said she and her fellow campaigning judges do declare potential conflicts as required by ethics rules. A finance committee handles their fundraising, and Heard said she does not know how much money particular lawyers or firms gave.

She says that when she recognizes someone from a fundraising event, she discloses the information to both sides in a case and gives them an opportunity to seek another judge. 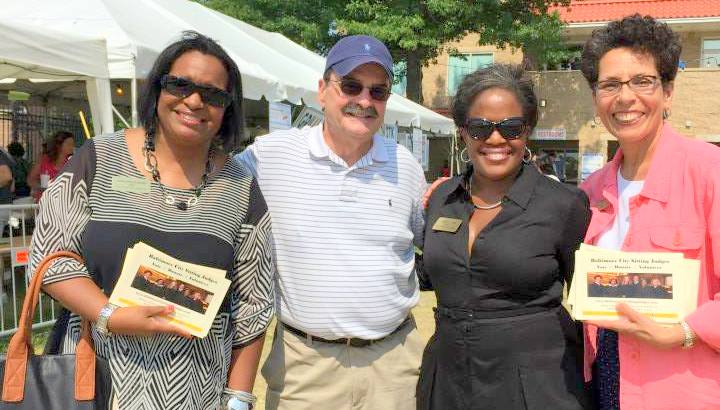 Fundraising, she said, is necessary (“we need to tell people who we are”) and costly (“those mailers cost a lot of money”). On the bench for 17 years, Heard said that ultimately citizens have to trust judges to behave ethically and can report them to disciplinary boards if they don’t.

“Am I running around buddy-buddy after hours with certain lawyers? Or am I doing my job?” she said. “Until they take away elections, this is the system we’re in.”

Compared to the sitting judges’ reliance on the legal establishment, Councilman Kraft has collected much of his election cash from developers, a key source of campaign loot for nearly all members of the City Council as well as for Mayor Stephanie Rawlings-Blake (who is not running for re-election) and City Council President Bernard C. “Jack” Young. 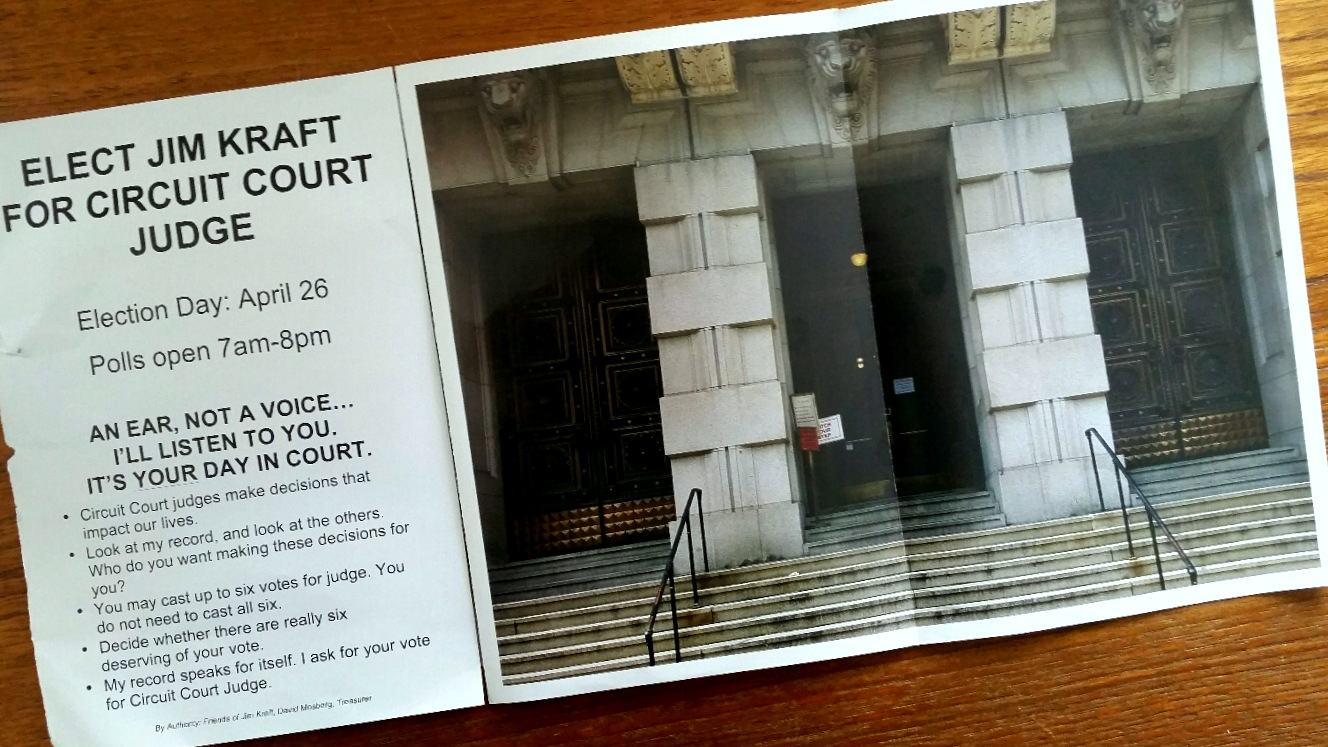 He picked up $750 from Baltimore Blast owner Edwin F. Hale Sr. and $4,500 from companies associated with businessman-developer Frank D. Scarfield.

NOTE: Three op-eds written by Todd Oppenheim were published in The Brew before he announced his candidacy.