Although appointed by the governor, Baltimore’s Circuit Court judges eventually have to defend their seats with voters. It’s an odd but predictable process that routinely results in the so-called “sitting judges” continuing, for a 15-year-term, to sit.

But the process is not playing out according to the usual stately script in the run-up to the April 26 primary election.

With challenger Todd Oppenheim repeatedly blasting the local judiciary for what he sees as bias against poor black defendants and a blind eye turned to police misconduct (a view that has gotten him national attention in the wake of the Freddie Gray case), this typically low-key race has become heated.

So heated that Oppenheim and his campaign treasurer Isabel Lipman, both Baltimore public defenders, were told that none of the six sitting judges who are running as a slate will hear any case on which either of them serves as counsel.

Oppenheim and Lipman say clients have been hurt by having to find new lawyers – in one case spending extra time in jail – and contend the move smacks more of petty retaliation than judicious recusal. 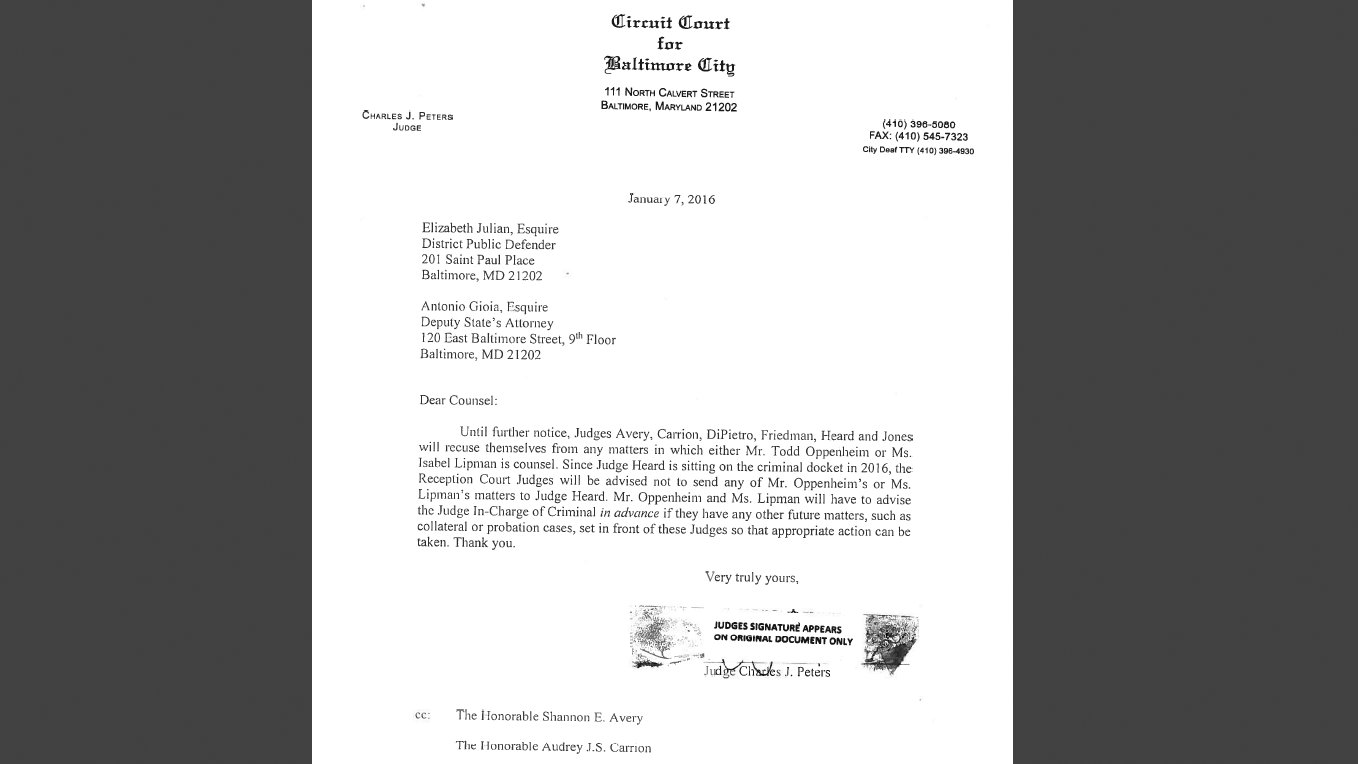 Letter informing Todd Oppenheim and his campaign treasurer Isabel Lipman that the judges he is running against in the primary will not hear their cases.

They received a letter informing them of the policy, though they first learned of it in Judge Shannon E. Avery’s courtroom and then when Judge Wanda Keyes Heard declared in open court that she would not preside over their cases.

PART 2: Money rains down on judges from city law firms

Asked last week what was behind the decision, Heard began by talking about Oppenheim’s published attacks on Baltimore’s judges, which have portrayed them as defenders of the status quo, out of touch with the struggles of the average citizen.

“Do you honestly think that the people in black robes over here can relate?” is how Oppenheim put it in his campaign announcement last fall.

That phrase hit a nerve with Heard.

“So this is what happened. I read in the newspaper that ‘all the judges in the black robes are not fair to the citizens and don’t care about the citizens of Baltimore City.’ That’s what he wrote!” she exclaimed. “For 17 years, I have prided myself on just the opposite.”

She went on to recount how she has been “appealed by the state because I suppressed evidence” against defendants, goes “out of my way to find services and drug treatment for people,” works hard in her community and volunteers. 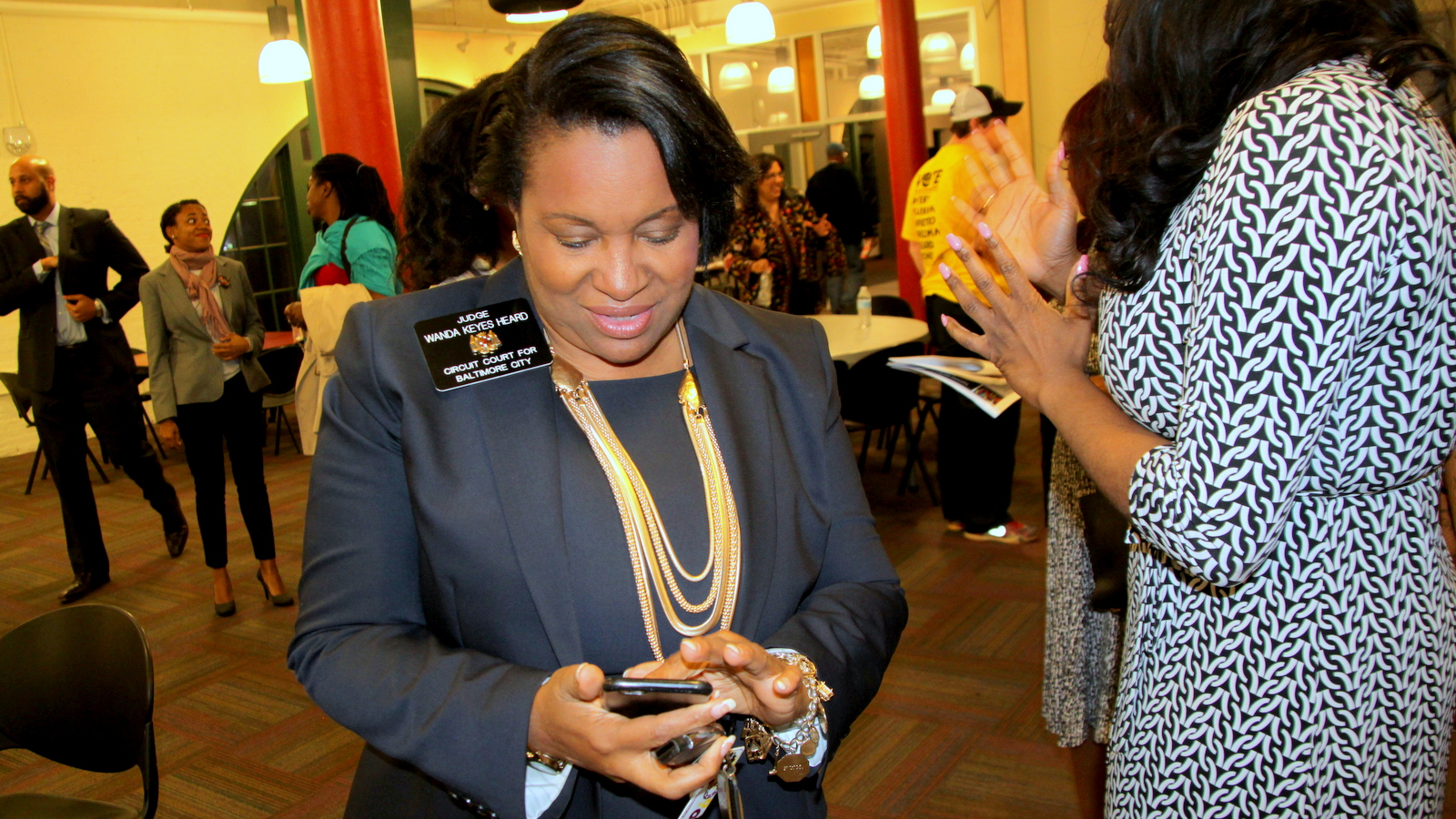 Judge Wanda Heard has been on the bench in Baltimore for 17 years. (Fern Shen)

Facing Oppenheim in court after “he says that and he wants my job” would, she told The Brew, clearly violate the professional ethics rule “that you cannot hear a case that gives the appearance of impropriety.”

“You can challenge my honesty, but don’t misrepresent my record,” Heard said. Grinning, she disputed the notion that clients would be harmed by the recusal: “There is no delay.”

Oppenheim is not the only challenger butting heads with the incumbent judges. What concerns them even more is a sitting public official with both a political base and sizable campaign war chest – James B. Kraft.

After three terms as Southeast’s First District Councilman, Kraft is leaving City Hall to run against the incumbent slate. He, too, has complained about the tactics of the sitting judges, specifically a letter he recently received from committee chairman, H. Mark Stichel, a partner at Gohn, Hankey, Stichel & Berlage.

The letter warned Kraft against his plan to print up ballots that pointed to the community groups that have endorsed him and one or more, but not all, of the sitting judge candidates.

“The Baltimore City Sitting Judges Committee will take any and all recourse available to it against you for any unauthorized use of any sitting judge’s name,” the letter said. 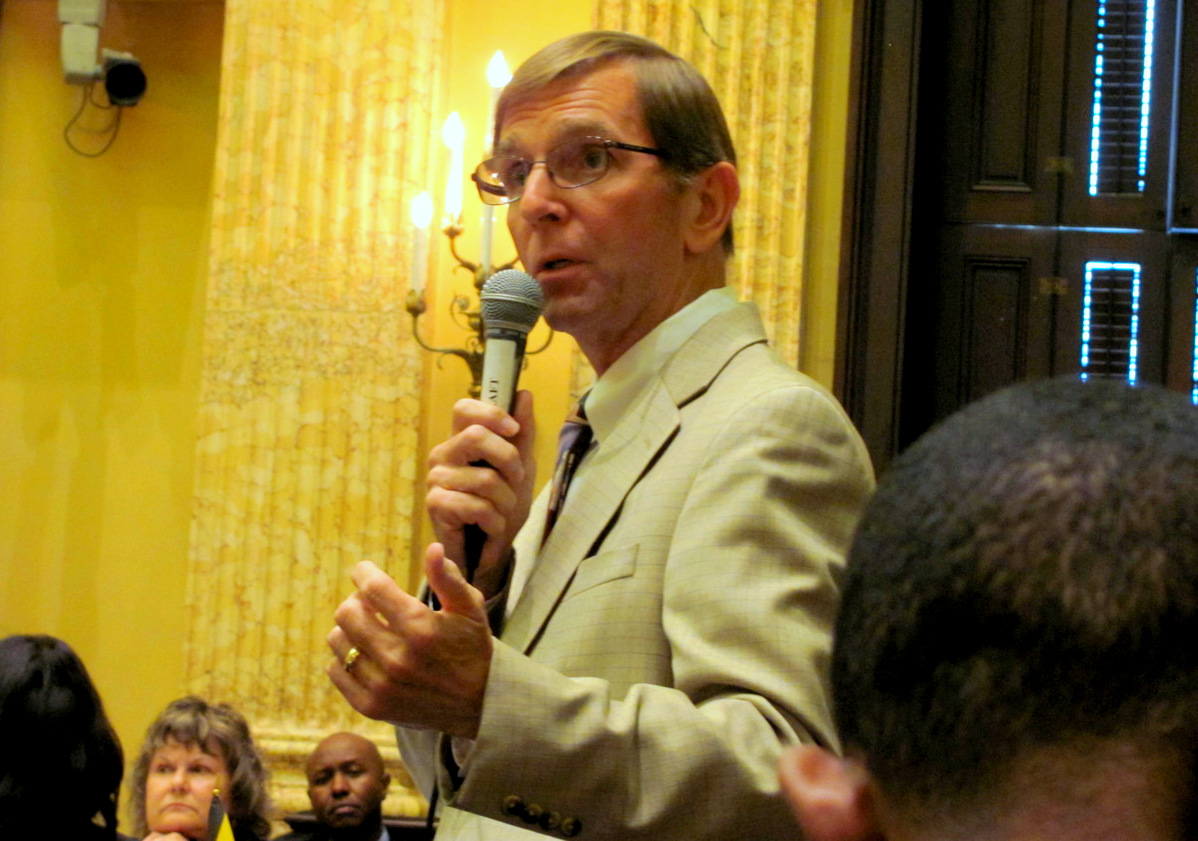 The entry of Councilman Jim Kraft into the judges’ race has the incumbents worried. (Mark Reutter)

Kraft called the letter intimidating and an infringement of First Amendment rights to free speech. Judge Heard responded that Kraft was improperly using judges’ names under his campaign authority line when they had not given him permission to do so.

In a flyer sent out this week emblazoned with the word “JUSTICE,” the Kraft campaign does not use any of the sitting judges’ names, but pointedly states:

“You may cast up to six votes for judge. You do not need to cast all six. Decide whether there are really six deserving of your vote. My record speaks for itself. I ask for your vote for Circuit Court Judge.” 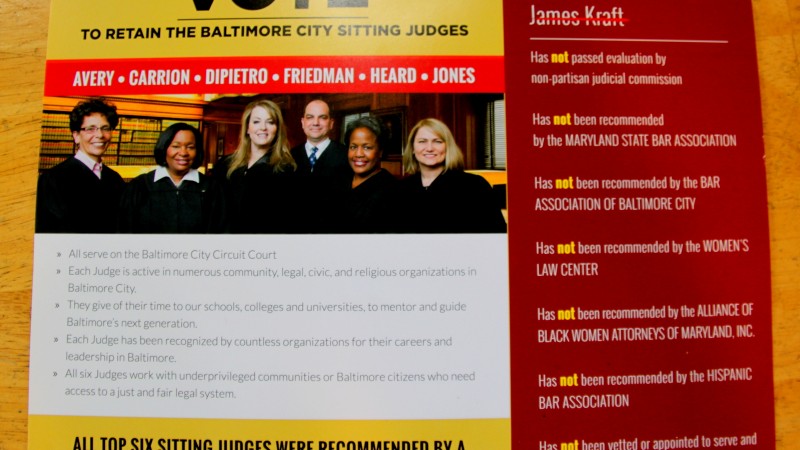 To pay for all that literature, they’ve raised copious funds from contributors.

Raw Moments at the Roundtable

Saying they are constrained by ethics rules from making promises about future decisions, the judges while on the campaign trail simply pledge to apply the law knowledgeably and fairly. Multiple mailers to voters stick to stressing the group’s community good works and ties to a diverse city. “We are Baltimore” is the slate’s tagline.

But in what all of them said was a uniquely intimate setting, four of the six did engage with potential voters recently at an event organized by the non-partisan group Black Girls Vote.

Oppenheim also attended the Judicial Roundtable, where participants were encouraged to rotate from table to table in order to meet all the candidates.

Many discussions hovered around the issues raised over the past year – poor police-community relations, too much focus on policing and jailing, not enough on drug treatment and jobs training.

“I’m not a legislator. I have to act within the laws,” Heard told a young man in a University of Maryland sweatshirt, saying she was bound by the lack of available public programs to help divert people from prison.

“I can’t do any of those things you want,” she said. “I can identify people who need help, but if it takes me six months to get them into treatment . . .” Her voice trailed off.

At another table, Judge Audrey J.S. Carrión, who has sat on the bench for 19 years, was recounting for her tablemates how she convened a grand jury in 2001 to look at “a simple question: why is it that we mistrust police?” 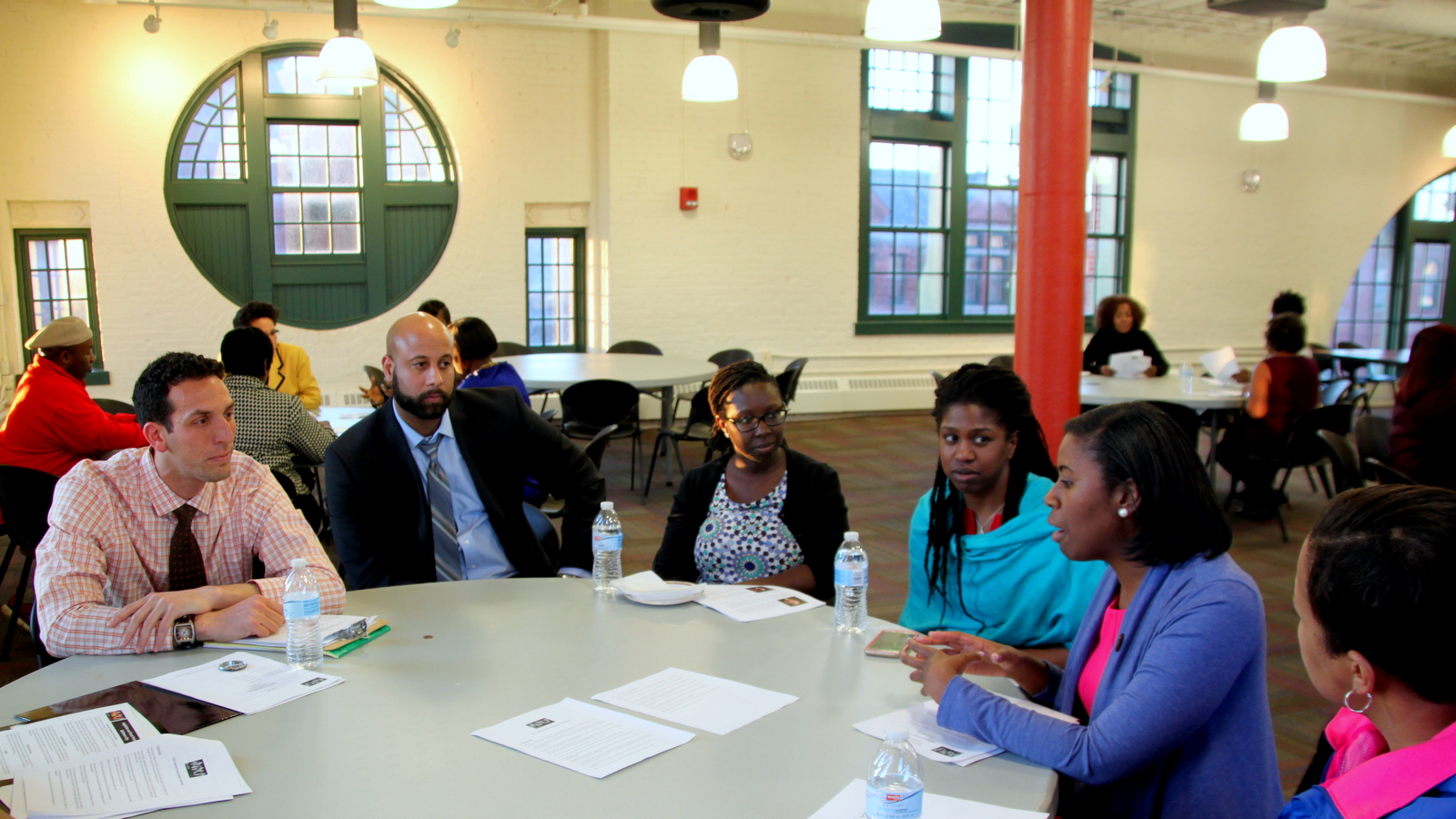 Todd Oppenheim (left) answers questions at a forum for candidates for the judge slots. (Fern Shen)

“It told us all the things we know. Police need training. They need to live in the community. We need Police Athletic Leagues to open again so kids have something to do,” she said. “So this issue is nothing new to me. And now we find ourselves again, 15 years later, in the same situation.”

The incumbents weren’t the only ones facing tough questions.

A former city prosecutor, Michelle Wilson, blasted Oppenheim. She asked him why the voters should choose him over the sitting judges, challenged his basic platform (“You’re saying that poor black people in this city get unfair trials?”), and asked how he could sit on civil cases since he had never been involved in any as a lawyer.

“Because I went to law school, Michelle,” he replied to her last question.

“That’s it?” Wilson shot back.

Confrontational as it was at times, the event was termed “fantastic” by Oppenheim, who noted that only two other forums have included him with the sitting judges. 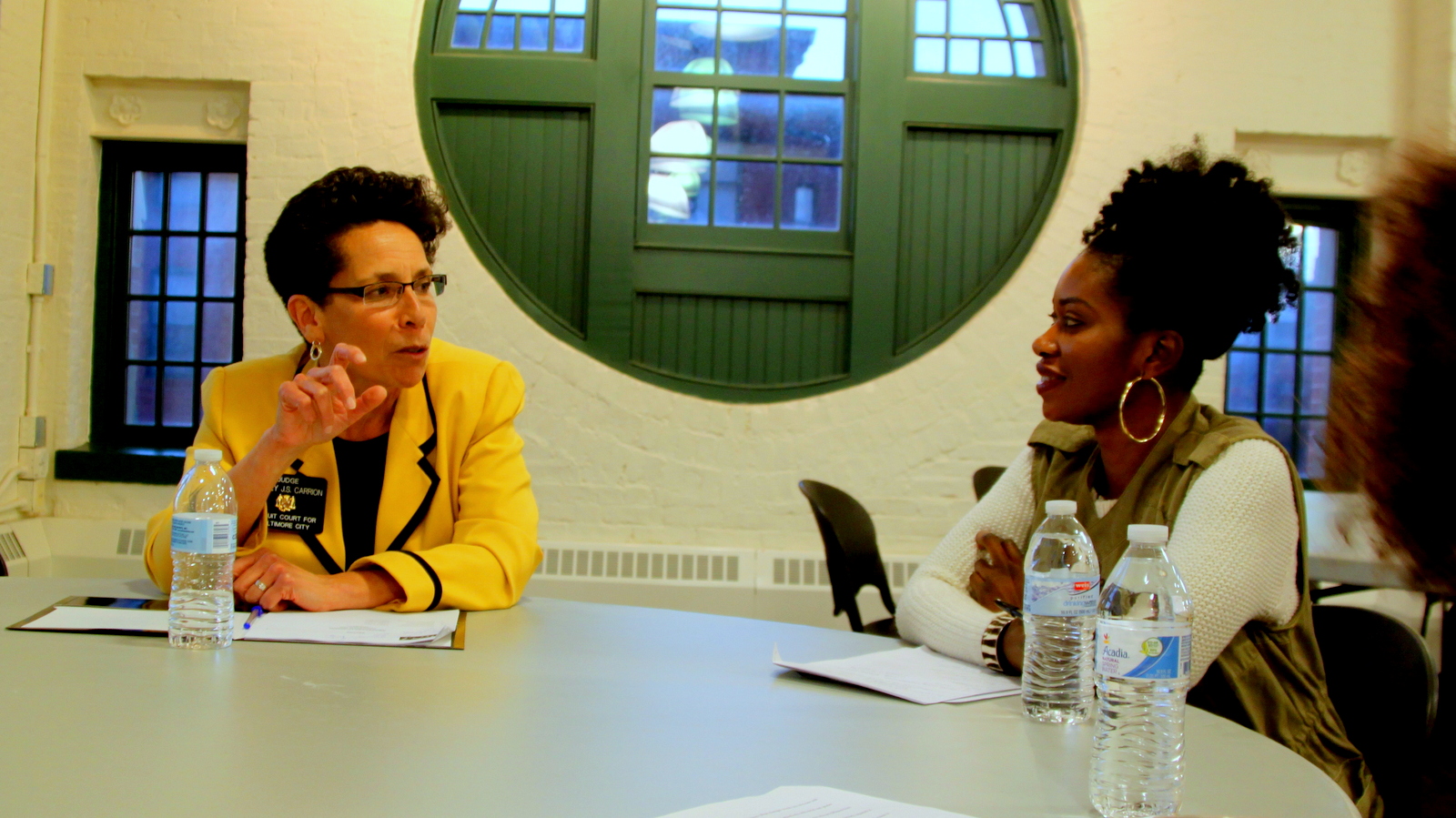 The judges also said they welcomed the opportunity to engage informally with the public and demystify the judiciary by educating citizens. One of them, Judge Cynthia H. Jones, brought up the Justice Reinvestment Act passed recently by the Maryland legislature.

In addition to creating tough sentences for some crimes, the legislation is designed to get more low-level drug offenders into treatment, find ways to get some inmates released sooner, remove some mandatory minimum sentences and make it easier for people in certain instances to expunge convictions from their record.

The act gave the incumbent judges an upbeat answer for the questions many had posed throughout the evening.

“I think it’s landmark legislation because [of] the tone,” Jones said. “It doesn’t say a judge may, it says a judge shall.”

Heard, in her closing statement, concurred, calling the legislation “pivotal.” But she added that she hopes state government also approves the funding necessary for alternatives to prison. To which somebody in the room remarked, “Umm, that’s not here yet.”

Part 2: “Money rains down on judges from city law firms”