Baltimore voters may have chosen a career politician for mayor in yesterday’s Democratic primary, paving the way for an Annapolis veteran, Catherine E. Pugh, to win the November general election.

But they also cracked open the door to an intriguing group of newcomers to the City Council with fewer apparent ties to the entrenched Democratic Party establishment than their predecessors.

From businessman Ryan Dorsey, who has called for a $15 minimum wage and questioned the wisdom of city subsidies to waterfront developments, to Zeke Cohen, a Teach for America alumnus, and Kristerfer Burnett, a community organizer, the freshman class of Council nominees has the potential for making real change in a body often ridiculed as ineffective.

Some of the nominees – who most likely will be new Council members after the November 8 general election – got their opportunity thanks to a departing incumbent. 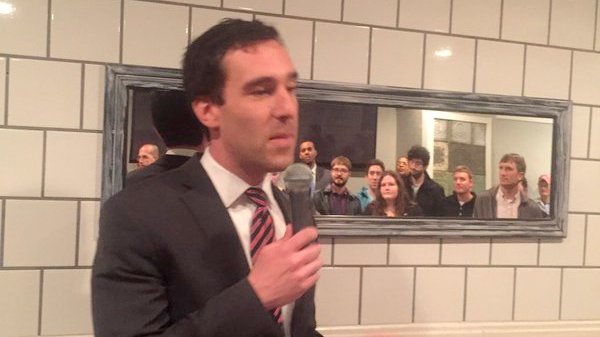 For example, Councilman Robert Curran’s decision not to seek re-election opened up the Northeast 3rd District (which has seen a Curran on the Council more or less since 1953) to nominee Dorsey.

Councilman James B. Kraft’s stab at becoming a Circuit Court judge led to a large field of primary candidates in the 1st District, with Cohen leading the pack.

In all, six incumbents opted not to enter the 2016 race – Helen H. Holton, Nick J. Mosby, Rochelle “Rikki” Spector and Carl Stokes, together with Curran and Kraft.

Other political neophytes, meanwhile, got onto the Democratic ticket for the November general election by dislodging old-line machine incumbents.

Bullock took 51% of the vote (to Welch’s 33%) in West Baltimore’s poor 9th District. Welch’s defeat presages the end of a dynasty that goes back decades – essentially he inherited the seat from his mother, Agnes B. Welch, whose 27-year Council reign ended in 2010.

Bullock, who provides political analysis on local radio news programs, has questioned the city’s approaches to dealing with economic development and the surfeit of vacant houses. In September, he was one of a number of local political hopefuls who attended a three-day workshop (named “Camp Wellstone” after the late Minnesota senator, Paul Wellstone) to help progressive candidates win local office.

On the Eastside, Shannon Sneed, a former broadcast journalist, thrashed Councilman Warren Branch, taking 54% of the vote to the incumbent’s 17%. (Antonio “Tony” Glover straddled the chasm between Sneed and Branch with 24% of the vote.) 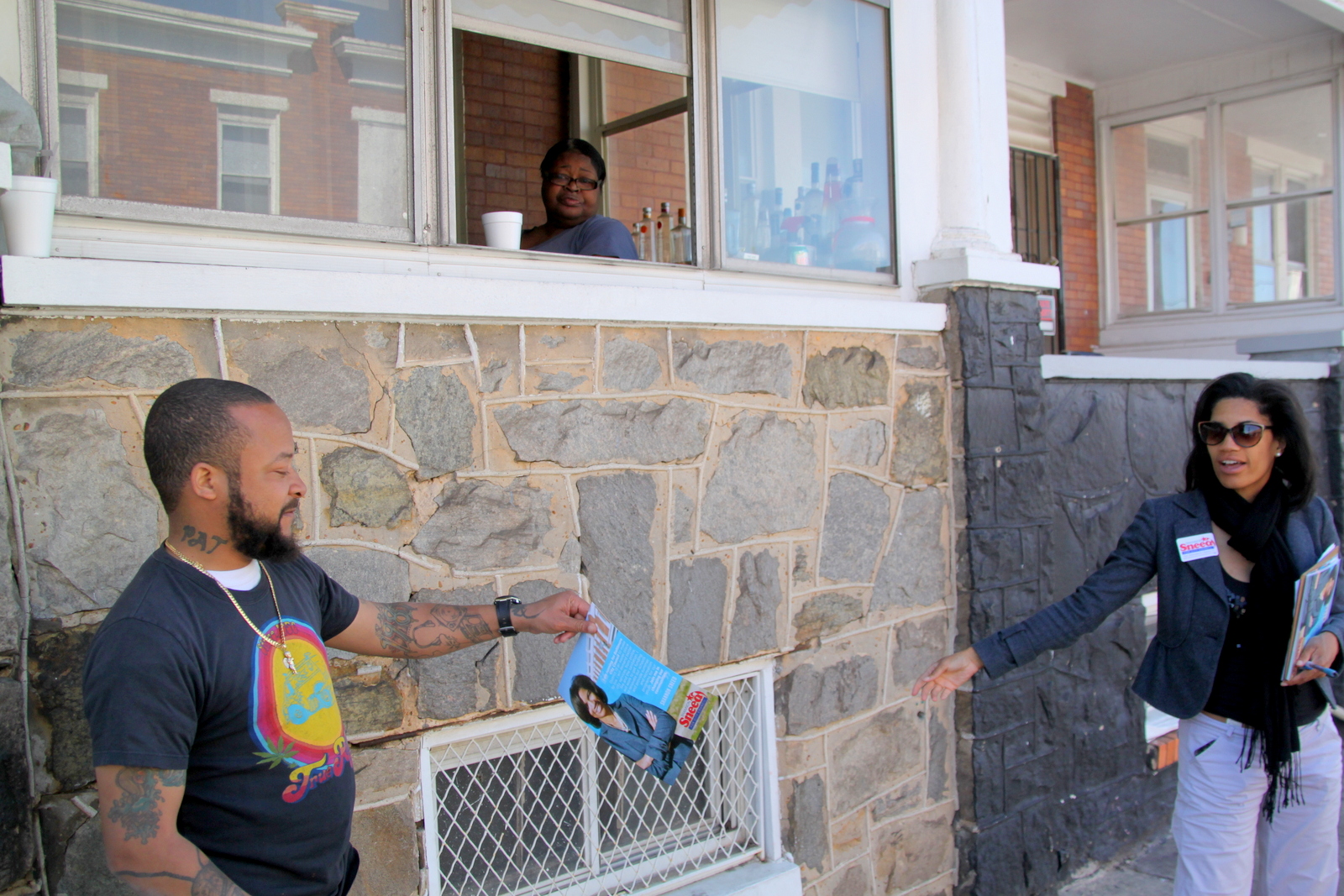 Shannon Sneed campaigns on Sunday. Unlike her narrow loss to Warren Branch in 2011, she won handily this year. (Louie Krauss)

Known for leading neighborhood tree-planting campaigns and clean-ups in the 13th District, Sneed has pledged to do a better job of responding to constituents, showing up at meetings and dealing with quality-of-life problems. She has stressed expanding youth employment programs, giving neighborhood residents a greater share of local construction jobs, and investing more in city recreation centers.

If nothing else, candidates like Sneed, 35, and Bullock, 37, represent a generational shift that will mean citizens might be more likely to connect with their representative through social media and email. Branch, 55, the brother of state Delegate Talmadge Branch, and Welch, 62, who favors formal suits and pinkie rings, represent an earlier era in Baltimore politics.

In part, it’s the sheer number of new faces that is striking in this year’s election.

In 2011, 12 of the 14 incumbents kept their seats, and only one was the result of an incumbent being voted out. (Mosby defeated 7th District Councilwoman Belinda Conaway. The 2nd District seat that Brandon Scott snagged came open when Councilman Nick D’Adamo decided not to run in 2011.)

Amid all the talk during the campaign of a “changing of the guard” on the Council, only time will tell how independent the new class will be from the city’s various power-brokers and officeholders. 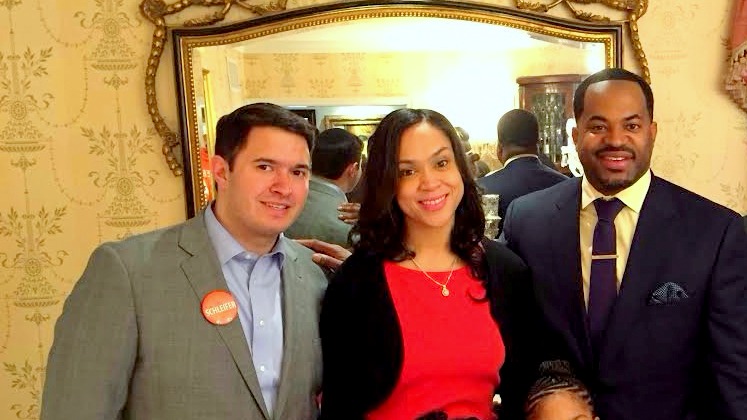 For example, District 8 nominee Kristerfer Burnett, director of community organizing for Comprehensive Housing Assistance Inc, was endorsed by incumbent Helen Holton, who was never known for her activism. District 12 nominee Robert Stokes has been an assistant to Councilman Carl Stokes (to whom he is not related).

Another primary winner, Leon F. Pinkett III in the 7th District, is a City Hall insider. He has served a former senior officer with the Baltimore Development Corporation (BDC) and part of Mayor Stephanie Rawlings-Blake’s neighborhood development team.

Another new face, Isaac “Yitzy” Schleifer, in the northwest’s 5th District has been district liaison to the State’s Attorney’s Office and has attracted State’s Attorney Marilyn Mosby and Councilman Nick Mosby to his campaign events.

One way to take a measure of any new Council member is to watch for his or her independence from incumbent City Council President Bernard C. “Jack” Young.

Young, who grew up in the Eastside political machine, has carried a big stick in persuading Council members to subsidize upscale Harbor Point with a $107 million TIF (tax increment financing) package.

Similarly, Councilman Eric T. Costello’s occupancy of the 11th District seat – through a special Council selection process that left resentment in its wake – was engineered by Young.

The Council President is now trying to consolidate his power through a charter amendment before voters in November that will strip Baltimore’s mayor of majority control of the Board of Estimates. The current Council passed the measure earlier in April by a majority vote that appears able to withstand an expected veto by Mayor Rawlings-Blake.

Young also sponsored a bill giving the Council the right, if approved by voters, to add money and new programs to the annual budget, a power presently forbidden by the City Charter and the mayor’s de-facto power over the Board of Estimates.

While taking on a “godfather’s role” in the Council, Young has made scant effort to connect with voters. He refused to attend candidate forums that included his Democratic opponent, Kim Trueheart, an activist who religiously attends City Council and Board of Estimates meetings, sometimes chastising Young for his actions from the audience.

Without the support of the Democratic machine infrastructure or professional fundraisers, Trueheart won 31% of yesterday’s vote as City Council President, a demonstration that Young’s sway over the Council is not necessarily shared by some voters in the neighborhoods.