The Rawlings-Blake administration’s effort to speed through $535 million in tax increment (TIF) financing for Kevin Plank’s Port Covington development met with pushback yesterday by a dozen labor, housing and other advocacy groups – as well as a city councilman who questioned the rationale for the public subsidy.

“We are speaking out against the fast-tracking of the TIF,” said Marceline White, director of the Maryland Consumer Rights Coalition at a rally in front of City Hall.

Saying the administration wants to ram through the financing deal before lame-duck Mayor Stephanie Rawlings-Blake leaves office, White said the public has gotten only limited information about the project.

“The swift process prevents and limits the opportunity of citizens to understand what this deal is all about and what its [financial] implications are for the long term,” she said.

Among the groups represented at the rally were AFSCME, the American Federation of Teachers of Maryland, Health Care for the Homeless, Unite Here Local 7, Laborers International Union of North America, Maryland Working Families, Baltimoreans United in Leadership Development (BUILD), Peoples Power Assembly, Project PLASE and City Advocates in Solidarity with the Homeless.

At a City Council hearing held after the rally, Councilman Carl Stokes had his own critique of city’s plan to pay for new roads, sewers, parks and piers on property that Plank owns and wants to turn into a shoreline “destination.” The mixed-use waterfront project would be anchored by the headquarters of Plank’s company, sports-apparel-maker Under Armour.

Stokes, who heads the economic development committee that must act on the TIF legislation, noted that a similar community is now being built on 200 acres of land in White Marsh without tax subsidies.

The developer, Edward St. John of St. John Properties, is paying for his own infrastructure, Stokes said.

“There is no TIF subsidy given by Baltimore County. What is special about us that Mr. St. John is going to pay for his own infrastructure, and we decide that we will support, totally, the development of a private development on private land?” Stokes asked.

The task of responding to Stokes at the hearing, which filled the Council chambers to capacity, fell to William H. Cole IV, president of the Baltimore Development Corp. that recommended the TIF financing to Mayor Rawlings-Blake. 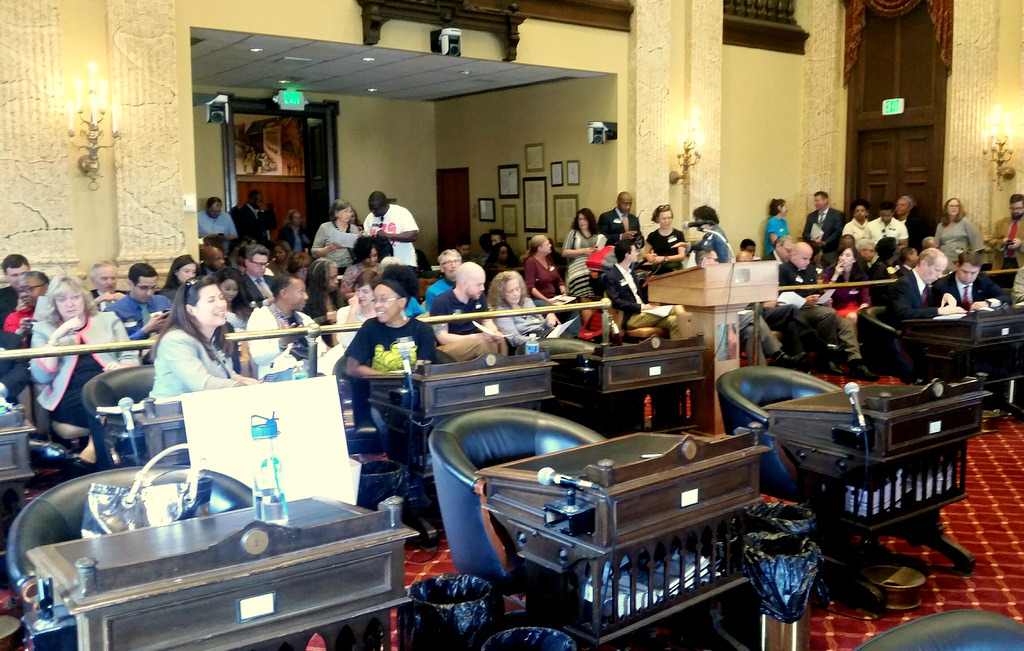 The Council chambers were full during yesterday’s TIF hearing. At far right, Steve Kraus of the finance department and William Cole, president of the BDC, prepare to speak. (Mark Reutter)

Cole said that Baltimore County did invest significantly in new roads around White Marsh, while other counties have other strategies. For example, Howard County has built “entire communities waiting for developers to come in.”

Stokes asked why the city couldn’t do the same thing. He suggested using general obligation bonds to finance Port Covington’s infrastructure in incremental steps rather than approve the full panoply of TIF bonds in one piece of legislation.

Steven Kraus, deputy director of finance, said Plank’s property, a former railway yard, has special costs that no developer could shoulder on his own. He cited environmental concerns and a deteriorated shoreline.

Stokes replied that the Rawlings-Blake administration used the same argument of environmental woes to defend the $107 million in TIF funding given to Harbor Point even though, Stokes said, Cole’s predecessor, M.J. “Jay” Brodie, once bragged that the property was “the most prime piece of land on the East Coast.”

(The TIF application notes that Port Covington expects to be eligible for $119 million in “brownfield” tax credits – to offset environmental clean-up costs – plus another $127 million in state “EZ” Enterprise Zone tax credits.)

Two spokesmen for the community advocacy group BUILD told the Council that the Port Covington TIF would siphon off public funds from existing Baltimore neighborhoods in need.

“It is not really true to say that taxpayers outside of the TIF district do not support the TIF district,” said BUILD co-chair Rev. Andrew Foster Connors. “TIFs divert new tax money away from the general fund. So they put new pressures on city services that result either in cuts to services or increased costs for neighborhoods outside of that TIF district.”

Rev. Calvin Keene, pastor of Memorial Baptist Church in East Baltimore, noted that the city has guaranteed a profit for Sagamore Development. (The application form says that with TIF funding, the Port Covington project will generate a 9.24% internal rate of return, while without TIF funding, the project will face a 1.9% loss.) 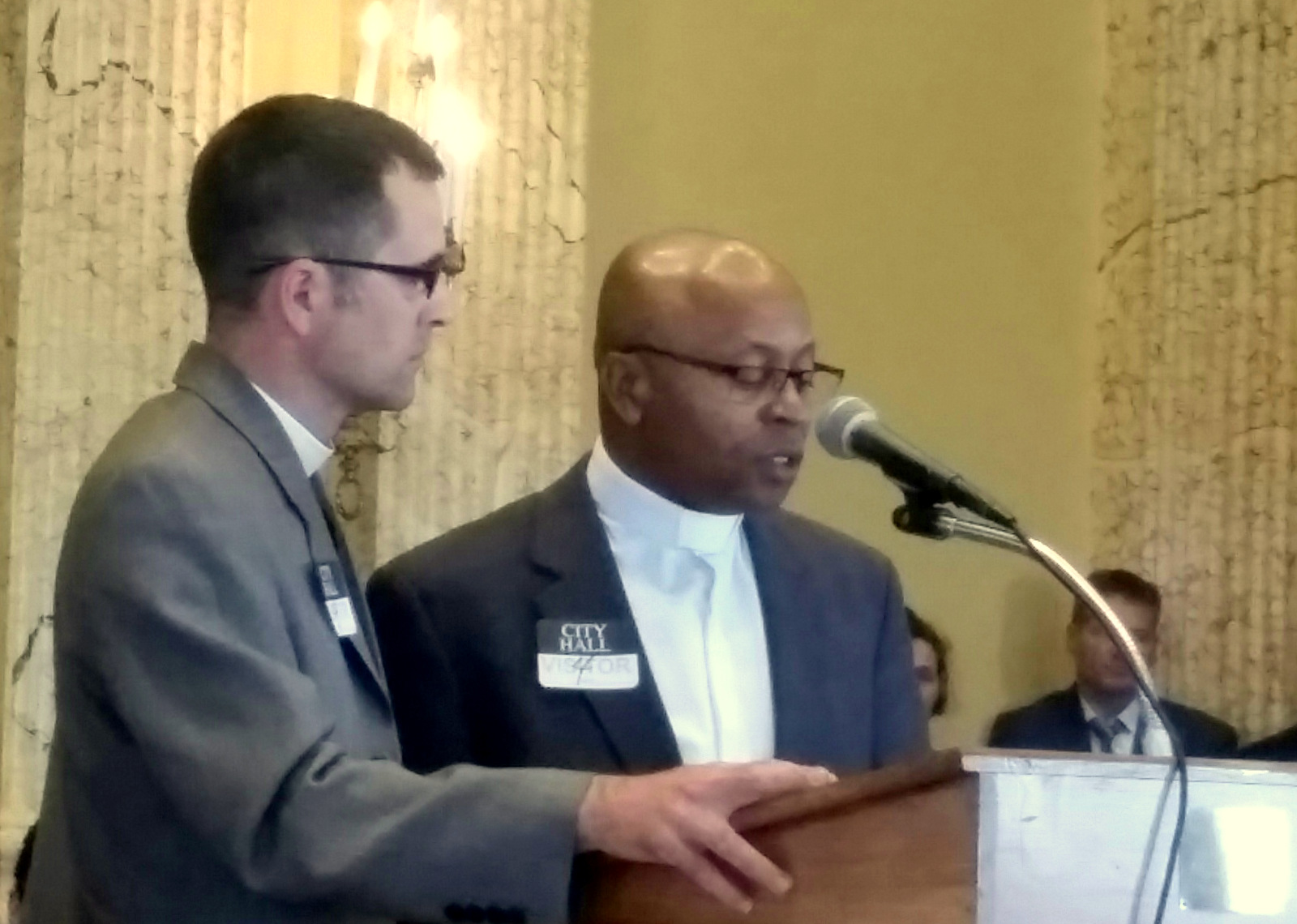 Since the city is greatly benefiting the developer, Keene argued, shouldn’t the developer make some paybacks to the city. He noted that the legislation presented to the City Council earlier this week has no binding commitments requiring Sagamore to offer low-income housing or to contribute to public education, (even though 884 school-age children are expected to eventually live there, according to the application).

All TIF subsidies should include a written agreement that “the developer who gets a TIF should guarantee that education is held harmless for the full duration of that TIF,” Connors said to loud cheers from the audience.