Baltimore government, which failed to fix its crumbling sewer system this year as required by a federal consent decree, will get until 2030 to clean up its act under the terms of a revised agreement released in draft form today.

Much of the major rehabilitation work not yet completed is to be done by 2021 and 2022, according to the new agreement, including eliminating a flow restriction at the Back River treatment plant that backs up sewage for miles in an underground pipe during episodes of heavy rainfall.

Observers were still combing over details of the 91-page document, reached after four years of intermittent negotiations between the city and the U.S. Department of Justice, Environmental Protection Agency (EPA) and Maryland Department of the Environment (MDE).

But one watchdog group, the Environmental Integrity Project, expressed disappointment at the length of time that Baltimore will get to comply with the 2002 consent decree aimed at stopping decades of raw sewage from sluicing into local waterways and the Chesapeake Bay during storms in violation of the 1972 Clean Water Act.

“It is disappointing that this proposed revision to Baltimore’s sewage consent decree drags out the deadline 14 years into the future for a project the city has already had 14 years to finish, and which was supposed to be completed six months ago,” the D.C.-based group said via spokesman Tom Pelton.

Pelton noted that the overflow problems chiefly affect lower-income residents “whose homes have been flooded with raw sewage” and who rarely get compensated for damage by the city.

The draft agreement allows the two most notorious sewage outfalls along the Jones Falls – which cumulatively dumped 90 million gallons of rainwater-laced sewage into the Inner Harbor in the last 16 months – to continue in service until July 1, 2022.

The new agreement, however, requires a better system of public notification of these overflows, which can affect the health of boaters, fishermen, children and other using the harbor and local streams.

Blue Water Baltimore noted those discharges in a statement today regarding the modified decree: “While the city has spent hundreds of millions of taxpayer dollars to try to fix the problem, illegal discharges of sewage from structured and unintentional overflows continue to dump millions of gallons of raw sewage into Baltimore’s waterways each year. Harmful bacteria from sewage overflows makes water unsafe to swim or fish in, and can also make people sick.”

Referencing costs – specifically the $1 billion the city estimates it would cost to complete the requirements of the original decree – Department of Public Works Director Rudy Chow said the modified decree will improve water quality at a more reasonable cost to ratepayers.

“It is work we must do to secure the long-term future of our critical infrastructure and to make sure Baltimore’s waterways are as clean as we can make them,” he said.

The DPW press release criticized the original decree, signed by then-Mayor Martin O’Malley, for setting too ambitious a goal for rebuilding a sewer network that had been neglected for decades.

The decree “had flaws, including an unrealistic end date, and did not anticipate how much additional work would be required,” the release said.

Meanwhile, Maryland’s Secretary of the Environment, Benjamin Grumbles, praised today’s agreement, saying, “Upgrading the sewers and greening the city will improve public health and environmental quality, and that’s good news for all of us.” 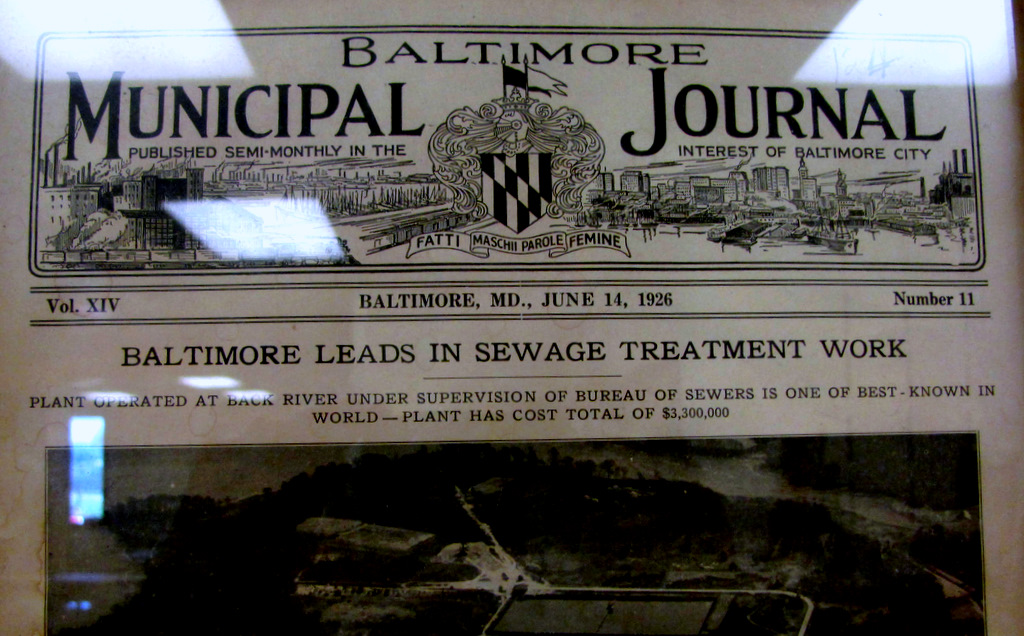 Baltimore lauds its Back River treatment plant in 1926, when its sewer system was nearly brand new. (Department of Public Works)

The revised decree specifies a Phase I deadline of January 1, 2021.

This would include finishing 23 sewer main clean-out projects identified as part of the original decree but not yet completed. The city says it will install 290 miles of “cured-in-place” pipes, or pipes within existing pipes, and replace 9.7 miles of antiquated pipes with new or “upsized” lines.

Another major project would be the correction of the so-called headworks problem at the Back River Wastewater Treatment Plant. A misaligned pipe leading into the facility causes a 10-mile backup in the city, sometimes triggering sewage overflows in basements that can impact hundreds of private homes and businesses.

According to the MDE, 83% of the city’s sewer overflow volume would be eliminated once Phase I of the decree is completed.

After finishing Phase I, Baltimore would develop a Phase II plan to increase the system’s capacity “based on the recommendations from the best possible engineering and technology” and put in place such state-of-the-art improvements by December 2030.

MDE and EPA would have to approve that plan. The two agencies would monitor its effectiveness for two years after its proposed completion in 2030. 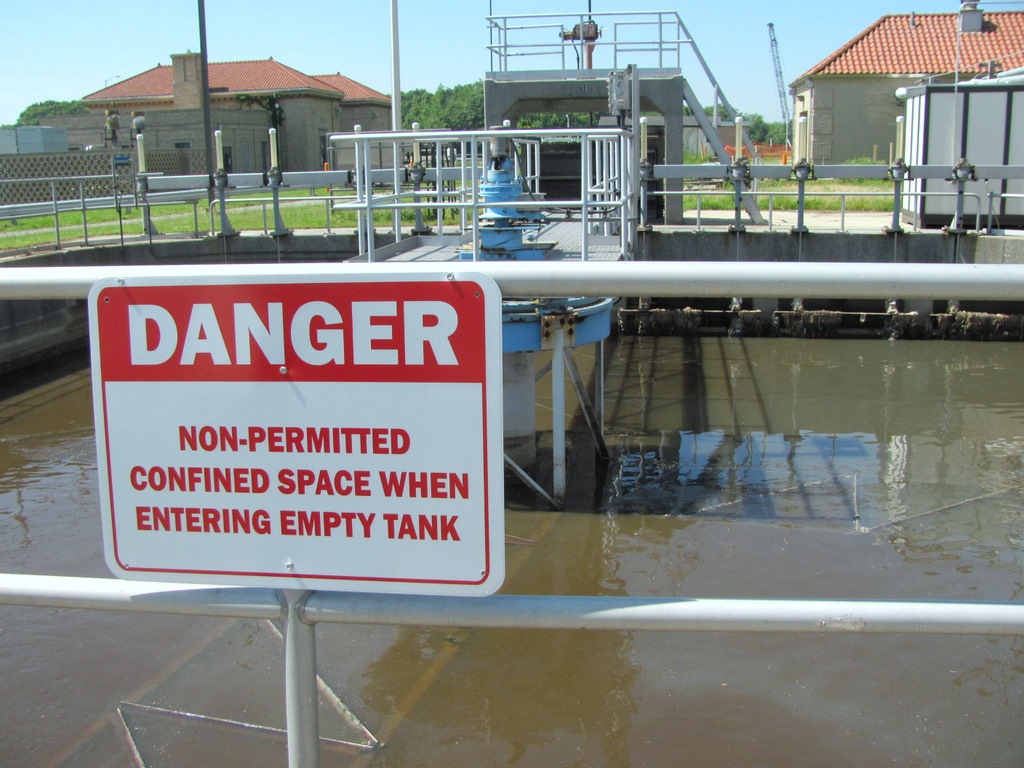 A tank at the Back River Treatment Plant settles the dirt and debris that come along with Baltimore’s daily flow of sewage. (Mark Reutter)

One more immediate area of concern for environmentalists is how the city proposes to end the use of its sanitary sewer overflow (SSO) structures.

The structured overflows are relief pipes that the city uses to discharge raw sewage directly into local waterways to lessen the pressure on the overburdened sewage infrastructure.

Under the original decree, such overflows were supposed to end in 2010.

The city did close down dozens of structured overflows, but two of its biggest outfalls – No. 72 behind 428 East Preston Street and No. 67 on lower Falls Road – remain in service and released 38 million gallons of untreated sewage water between December 1, 2015 and March 31, 2016 alone, according to records obtained by the Environmental Integrity Project.

Under the modified decree, these units would continue in operation until July 1, 2022, or six years from now.

The overflows would make the city’s goal of having the harbor “swimmable” by 2020 a near impossibility because the sewage discharges, with their high concentration of fecal bacteria, nitrogen and other pollutants, flow directly into the Inner Harbor via the Jones Falls.

The chart below shows other SSO pipes currently in use, and when they are scheduled to be re-engineered (“date of substantial completion of construction”) and shut down (“date of elimination”) under the new agreement: 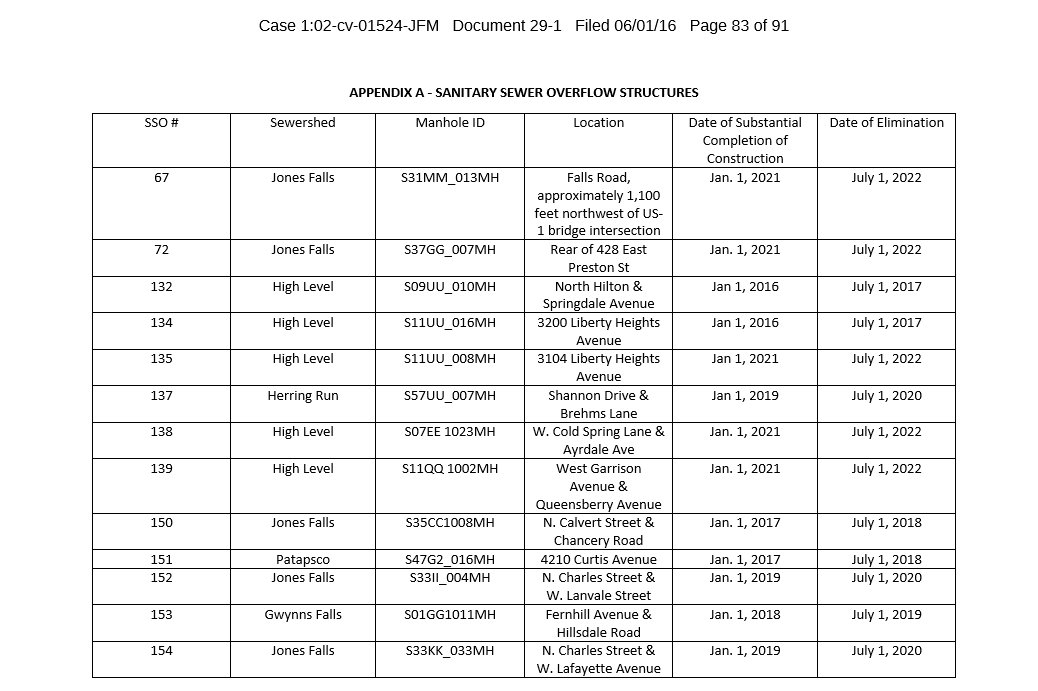 The modified consent decree will be under review by the U.S. District Court of Maryland and open for public comment for 60 days.

A public informational session about the terms of the agreement is scheduled for 7 p.m. next Tuesday (June 7) at MDE’s headquarters at 1800 Washington Blvd. After the comment period, the court is expected to finalize and approve the decree.