Today, residents and their supporters were assembled at Perkins Homes in East Baltimore to decry what they said are continued deplorable conditions and a break-off in communications with Graziano.

Alerted that the media event was taking place, Graziano and a clutch of deputies showed up and were confronted by Communities United organizers, who asked why he had stopped attending monthly meetings with them.

“We were meeting with you. . . And then you rescheduled. And we called. And you didn’t come,” said James Comer, executive director of Communities United, the lead group representing tenants during the past year’s controversies.

Graziano said that he is “always happy to meet with residents,” but at one point in the dialogue became combative.

“I’m happy to come here and meet with you folks. But you know what I’m not going to do – and this is one of the reasons why I stopped meeting with you. Because we’re not going to make a media circus every time we meet,” he said. 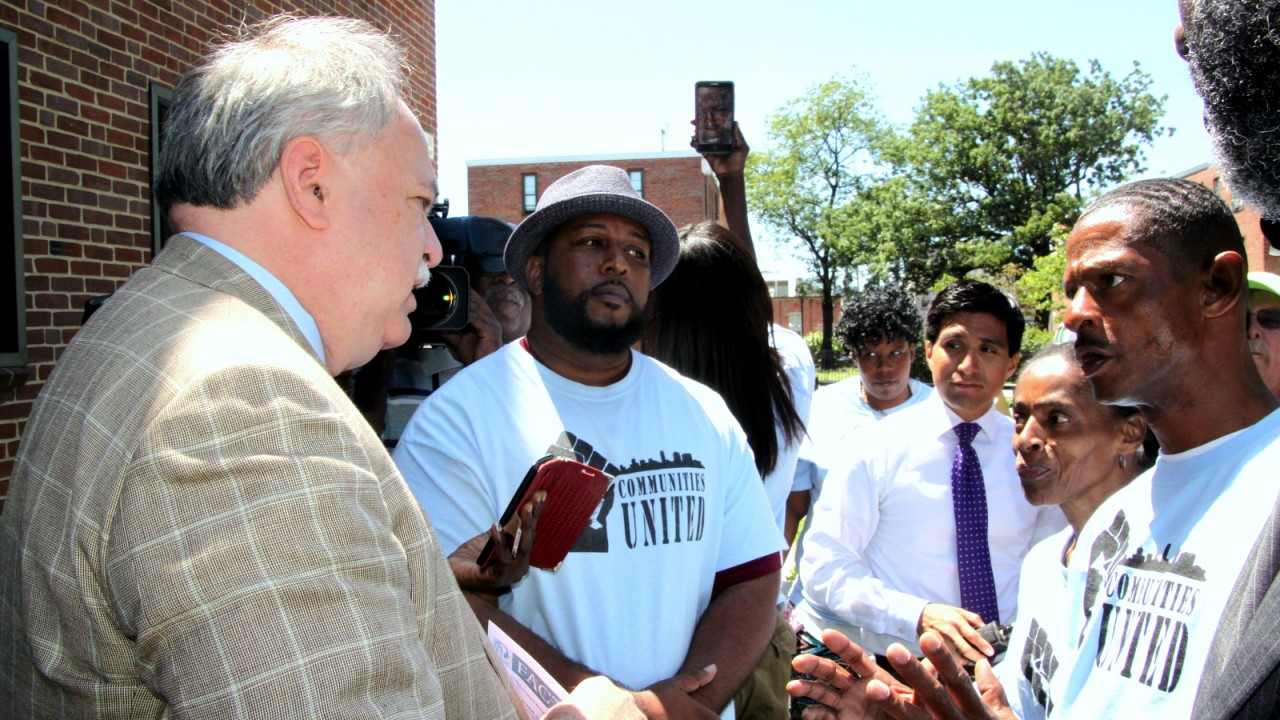 That comment set off a furious response from about a dozen residents and organizers. “You’ve been postponing with us since January,” one of them said.

“We invited you to something the other day and you didn’t come,” Graziano said. It was apparently a barbecue and residents said that was not the same as a meeting to discuss issues.

“I didn’t even have to come over here today,” Graziano said.

“Do you hear yourself?” Comer said, flabbergasted, as Graziano tried to explain himself.

By the end, Graziano agreed to meet with the group at Perkins Homes within two weeks.

The flaring tensions over public housing conditions come as a long-standing discussion about the redevelopment of Perkins Homes took a major step forward last week.

The Planning Commission approved the Housing Authority of Baltimore City’s (HABC) request to rezone the property. The new designation paves the way for the agency’s plan to  demolish Perkins Homes and build as many as 1,100 units of mixed-income development in its place.

Asked by residents and activists about the redevelopment plan today, Graziano said the agency has  “engaged in a planning process that starts with and fully includes the residents.”

“What we are hearing from residents is they want to be part of that community,” he said, cautioning that plan is a long way off.

“Whatever happens certainly isn’t going to happen overnight,” he said. “This is a 10-year-or-more build out process. We’re just in the very preliminary discussion stages.”

That’s just what worries Perry Hopkins, one of the Communities United organizers who confronted Graziano. Hopkins said tenants are worried that HABC will avoid spending money on maintenance  for a complex it ultimately wants to tear down.

“It’s like a car you’re going to sell – you’re not going to put new tires on it!” he said.

Meanwhile, according to Communities United’s Jane Henderson, “Throughout public housing in Baltimore, life threatening conditions include mold, a lack of heat, rodent and insect infestations, water and gas leaks and shut offs, and the risk of electrocution.” 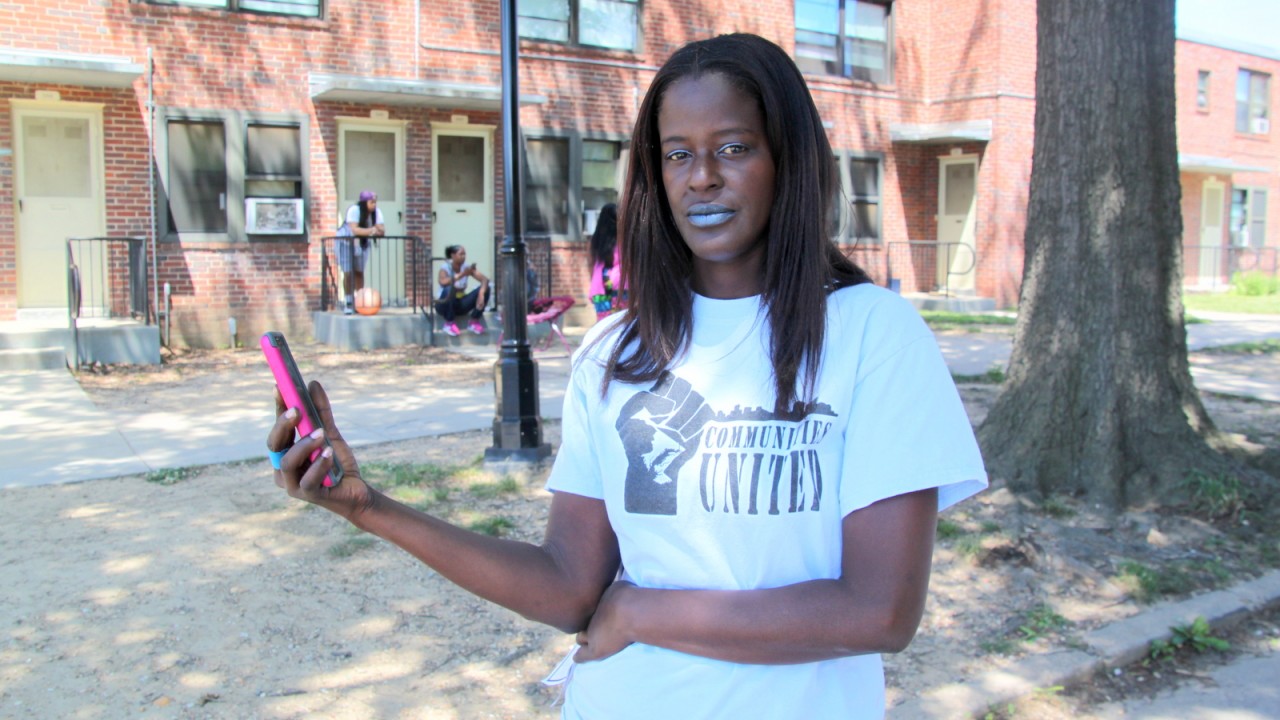 Tanetta Wilson, of Perkins Homes, said she can’t get the Housing Authority to fix her broken stove. (Fern Shen)

Henderson said HABC officials were beginning to make progress in some of these areas before talks broke down. “It’s the same thing they’ve been asking for – repairs that are going to ensure decent sanitation, health and safety,” she said.

Tanetta Wilson, 40, said a defective window, which has no lock, fell on her arm and fractured it, causing nerve damage. She said her stove has been broken for about six or seven months, and she can’t get the Housing Authority to fix it properly.

“I had to buy some little electric appliances to cook with,” she said. “It just don’t turn on.”

Another problem is a new rental payment system called Global Express, which Communities United said is not functioning properly, leading to payment problems and even eviction notices for residents. Graziano said he would look into it.

Trina Ashley, a Gilmor Homes resident for 30 years, said that basic living conditions are intolerable, and that lately pest infestation has been particularly bad.

“Bedbugs. Mice. Roaches. We had a little boy saying the bedbugs are biting him and they are hurting him and he wants them gone,” Ashley said. “You got smells in the basements making people sick. People cannot live like this. We’re not sugarcoating it for them anymore.” 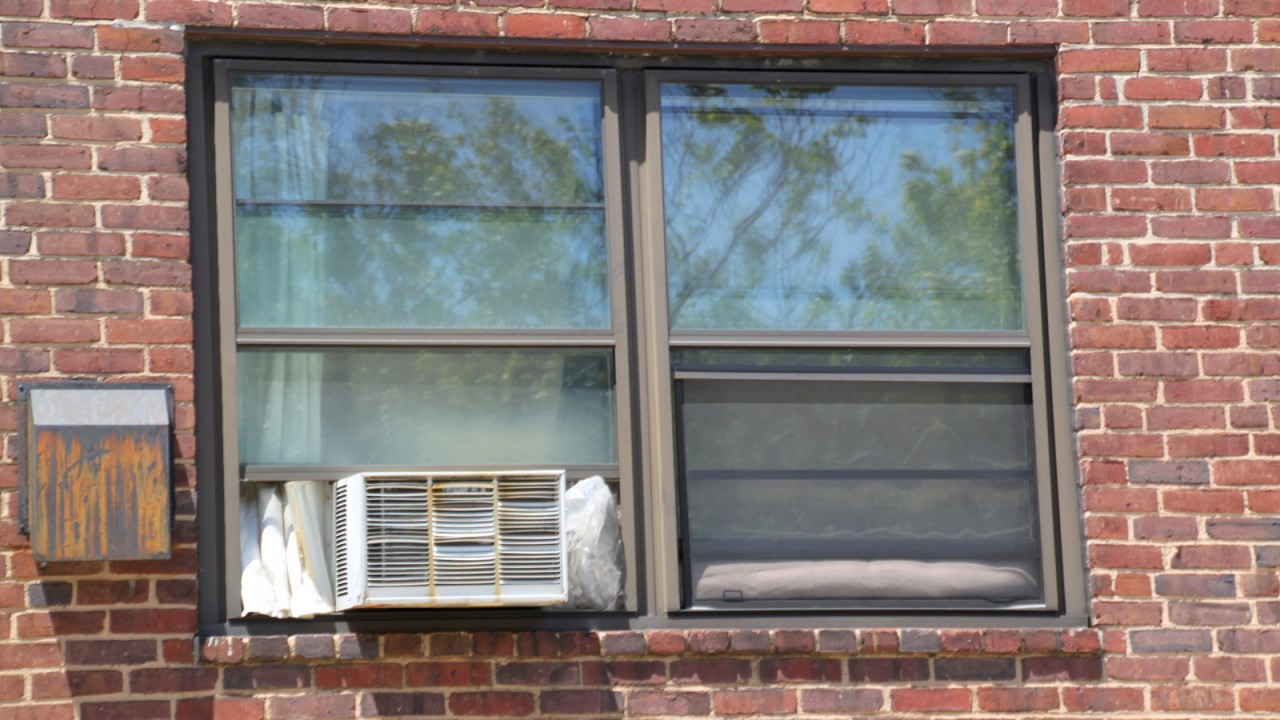 Below is a “Fact Sheet” by the Housing Department describing its efforts to improve maintenance at public housing units: 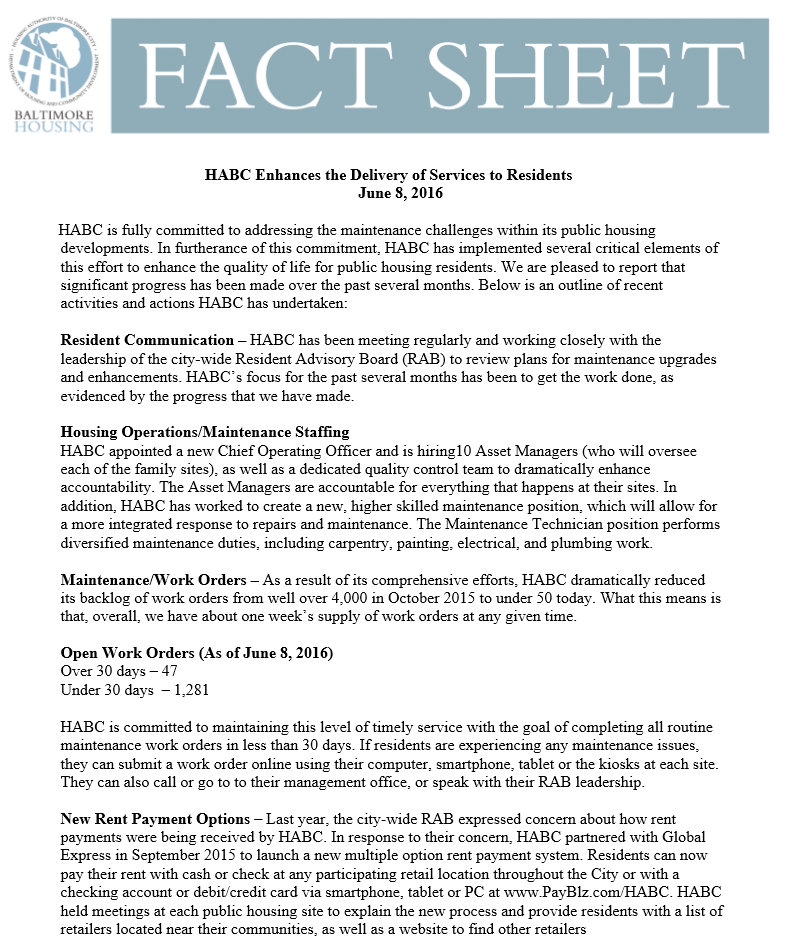 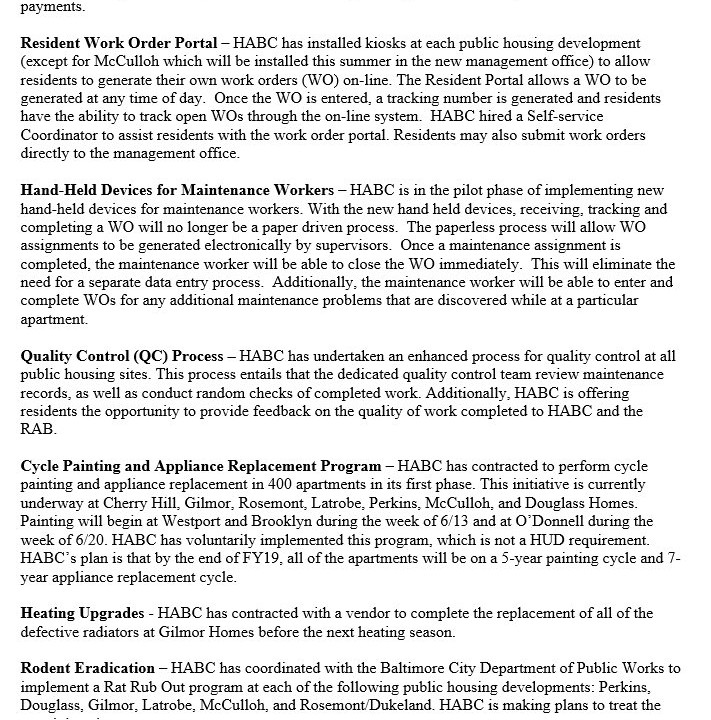 Page 2 of a Baltimore Department of Housing “Fact Sheet.”