Anger rippled through a crowd of nearly 300 people as they listened to an independent consultant describe the uncertainties and potential pitfalls of the Port Covington TIF application.

At one point, the consultant referred to the 30-year proposal, which is hinged on $660 million in tax increment (TIF) bonding from the city, as “almost like a house of cards.”

There was more hooting when another speaker pointed out that the advisor who scrutinized the project on behalf of the city relied on data provided by the developer.

But what brought the audience to its feet was the image of kayak landings and boat slips being financed with public bond money.

“With this, we’d be paying for something I would never use! We’re paying for a luxury that’s really not available to most of us! Who here has a kayak? I don’t!” exclaimed the Rev. Dellyne Hinton of Gwynn Oak United Methodist Church in Howard Park. 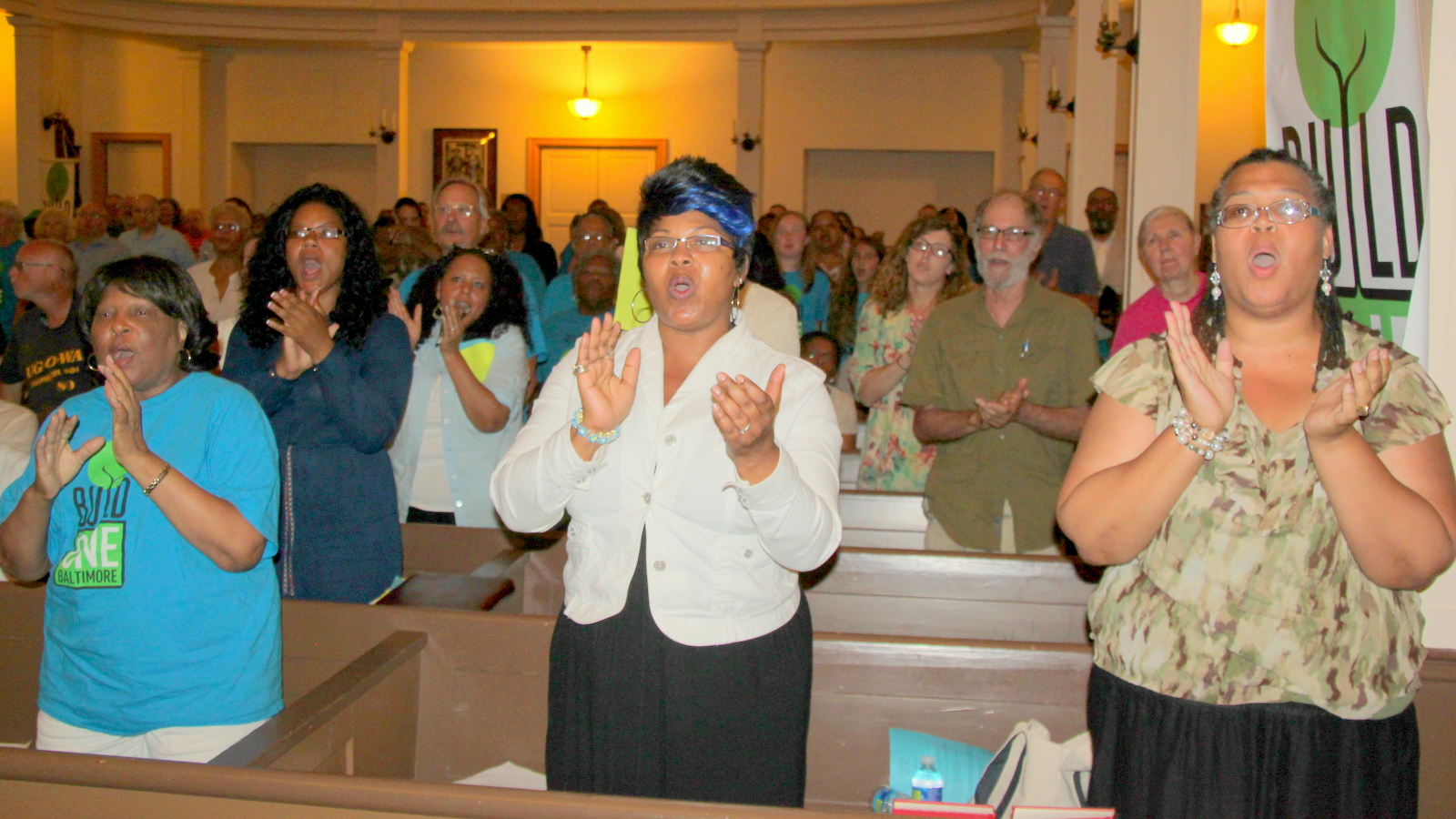 At Zion Lutheran Church last night, BUILD members called on the city to slow down on Port Covington. (Fern Shen)

Describing the pressing needs for investment in her Northwest neighborhood far from the water, Hinton said she was not opposed to parks or riverfront recreation, but did have a problem when Port Covington sought parks and plazas with a subsidy that is three times larger than the Parks and Recreation budget for the whole city.

“We’ve got parks across the city that are not being serviced,” she told The Brew afterwards. “I am offended by this.”

Only Scenario: the Rosiest One

Hinton’s comments were part of a meeting held last night by BUILD, the acronym for Baltimoreans United for Leadership Development, a citywide group with members from 50 congregations, schools and neighborhood associations.

Last week, BUILD called for the city to slow down its approval process for Port Covington at a news conference held on the corporate campus of Under Armour whose CEO, Kevin Plank, is spearheading the project through his privately-held Sagamore Development Co.

BUILD released a report last night by TischlerBise Inc., commissioned by the group as part of its concern that the project is shaky and needs an in-depth independent analysis before it can be approved by the City Council

The author of the 20-page study, TischlerBise President L. Carson Bise II, reported that he and his company have prepared more fiscal impact analyses for public and private clients than any other firm in the country.

Addressing the crowd assembled at Zion Lutheran Church across the street from City Hall, Bise grabbed the crowd’s attention with his observation on the amenities included in Sagamore’s justification for this largest-ever-in Baltimore TIF request.

“A lot of projects in there you traditionally wouldn’t see in a TIF, like the park improvements, the open space, the kayak landings, the boat slips and, some would argue, the [streetcar] circulator since it’s largely internal to the project,” Bise said.

But, he stressed, “the most important thing that’s lacking in this analysis is that multiple scenarios were not evaluated.” 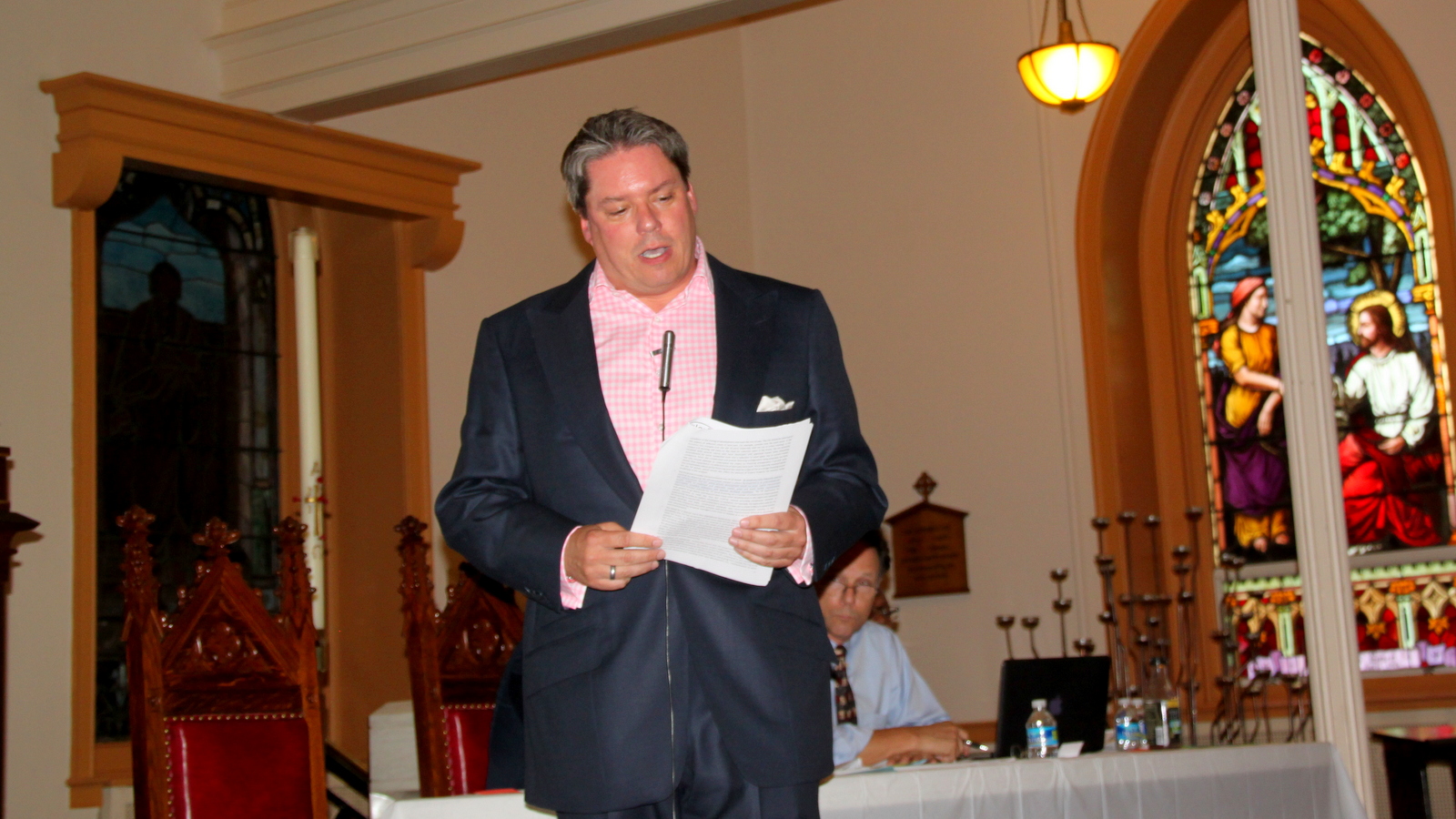 Carson Bise said the Port Covington TIF has too many uncertainties at present. (Fern Shen)

“I think,” Bise continued, “the city would be well-advised to be informed of what the implications or ramifications of these different scenarios are because one of the underpinning elements of this tax increment financing deal is the use of a special tax.”

The special tax – amounting to an estimated $292 million over 18 years (2021 to 2038) according to the single scenario presented in the TIF application – would be assessed on the developer or developers of properties at Port Covington.

If the developer failed to pay the special tax or declared bankruptcy, the city would be forced to pay the interest and principal in order to protect its credit rating.

“The reason I think scenarios are important is you’ve got a tax increment financing deal which is complicated. It’s almost like a house of cards,” he said. “A lot can change in the economy over a 20-year period. Look at what’s happened to the retail economy.”

Leading the meeting were BUILD co-chairs Rev. Glenna Huber and Rev. Andrew Foster Connor, who laid out the questions he said the group wants answered independently before the City Council approves the bills for the project.

Among them were fears that Sagamore has ignored or downplayed the cost of new schools, fire and police protection, and other municipal services that this city-within-a-city will require during and after its 30-year build-out.

“Are there enough taxes for the TIF District to support all those services that they’re going to need in Port Covington after all these new Baltimoreans are in the redevelopment? Otherwise we all end up subsidizing their services,” Foster Connors said.

He also questioned the job projections supplied by MuniCap, the city consultant who acknowledges that it relied heavily on Sagamore for data to justify the TIF request.

“Of the 26,000 jobs created, how many are just shifting from the Inner Harbor to downtown? How much of the TIF goes toward helping the people of West Baltimore get to their jobs,” Foster Connors said, noting that Sagamore’s request for federal funding for highway ramps will make it possible for “people from Anne Arundel County and Howard County [to] get to their jobs and get home at night.”

“Is there affordable housing so it’s not just another rich, white, gated community that the city does not need?” he continued, noting that the TIF application specifies studio or one-bedroom apartments targeted to singles or couples with average incomes of $100,000.

Stokes on the Firing Line

Huber put the groups’ question to Councilman Carl Stokes, who chairs the Taxation, Finance and Economic Development Committee through which the TIF legislation must pass before going to the full Council.

Stokes reiterated what he has already said: that he will vote against approval of the project until an independent analysis is completed. Asked if he would oppose any city-wide community benefits agreement unless it included BUILD’s demands, Stokes said he would, if possible.

“So it’s yes, with some wiggle room,” Huber summed it up.

Would he insist on a second City Council hearing following the July 27 hearing on the controversial proposal that both sides vow to attend in force? Yes, he said.

A Dream and Nightmare

Stoke was followed by longtime BUILD leader Bishop Douglas Miles, who looked ahead to next week’s Council hearing, saying that 90 BUILD members had signed up to attend.

Then Miles took listeners back 50 years to 1966 when the vice principal of his school, Clarence Blount, took him downtown to the site of the new Charles Center and “gave me a glimpse of what the Baltimore of the future would be.”

“Well, part of the vision is coming true,” Miles said last night, “and part of it developed into a nightmare of gigantic proportions.”

Starting from a $2 million city bond to jumpstart downtown redevelopment through to today’s $660 million Port Covington ask – and moving from an era when manufacturing jobs sustained the city to today’s landscape of part-time service jobs, high unemployment and homelessness – Miles traced a development trajectory that had led many city residents downwards.

Describing Mayor Stephanie Rawlings-Blake as a “pawn in the game of rip-off being orchestrated by Sagamore,” Miles called on citizens to push for stronger terms in the latest waterfront development plan.

“It’s up to us, to you and I,” he said, using the group’s acronym in a call-and-response refrain, “to push for a better deal to build One Baltimore.”