Birders, families and nature lovers were thrilled in 2015 when the fences came down, and West Covington Park – on the northern shore of the Patapsco’s Middle Branch – was opened to the public.

Created with more than $7 million in taxpayer funds, the park had been left for years in limbo following the failure of its owner, the National Aquarium, to live up to its promise to build an “aquatic life center” there.

After coverage of the issue in The Brew, city officials made the once city-owned property, located in a prominent spot just north of the Hanover Street Bridge, accessible to the public. The city no longer owned the land, but it would, Department of Transportation officials promised, ensure that citizens could enjoy it.

But in 2016 the park was quietly sold to the developers of Port Covington.

While the deal struck with Weller Development included an agreement stipulating that the land must remain accessible to the public, a top city official terminated the agreement a year later, The Brew has learned.

That cleared the way for what is happening now at 101 West Cromwell Street: Weller Development is erecting a huge, white, semi-permanent tent there, has secured a liquor license and is welcoming the public to an open-air bar and restaurant there in a few weeks.

Live bands, dj’s, food trucks and more, offered from Wednesday through Saturday, are on the way.

Oasis on a Crowded Peninsula

What the park has been known for until recently, though, is not nightlife but wildlife. Great blue herons, ospreys, bald eagles, woodchucks and other wildlife flourished after West Covington Park opened in 2015.

It was a thrilling development for people like John Molino, who brought his children there to play and ride their bikes and scooters on the paths. 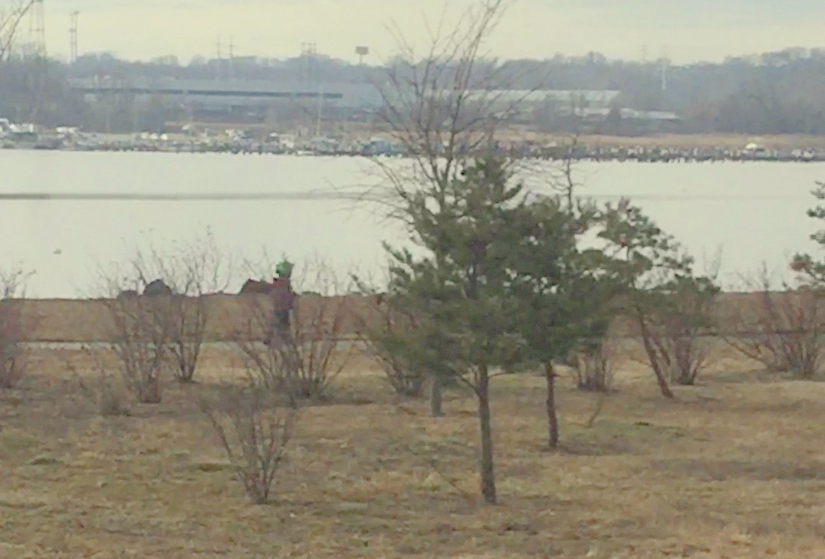 Birders had high hopes that these new plantings would harbor birds and other wildlife. They were soon cut down by the developer of Port Covington. (John Molino)

But Molino said he was shocked on a recent visit to find that most of the paths were removed, along with trees that had been planted and native species.

“They left a single loop of a path with a newly laid turf field in the middle,” he said in an email to The Brew. “Exercise equipment that was installed last year is now gone.”

In place of the trees, a large semi-permanent tent is being built in the park atop a platform of white stones. There’s also a rectangular area with beach sand.

“What the heck is wrong with this city,” asked a resident who has watched the wild place he had come to love dissolve before his eyes.

“What the heck is wrong with this city?” asked city resident, Noah Bers, posting photos of the big tent on Facebook.

“In terms of habitat, it was a nice example of the right way to make a good waterfront for many purposes,” according to Bers. “A lot of birders are really devastated about this.” 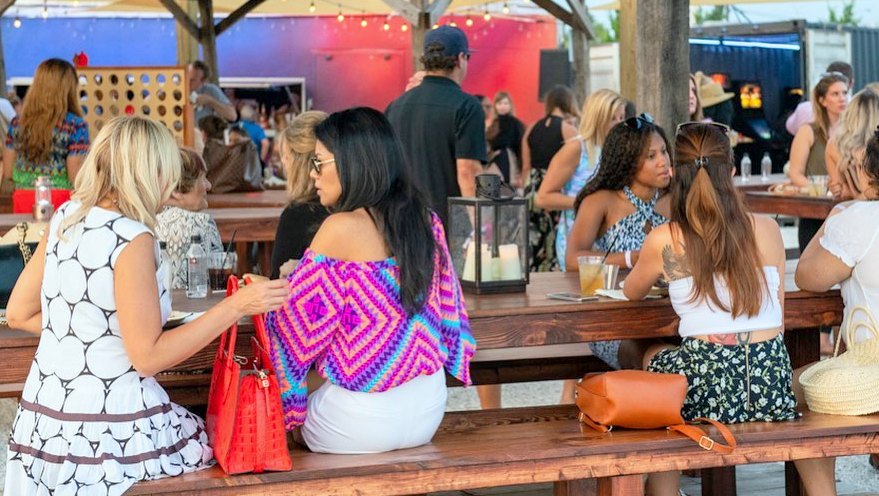 A photo of “South Point,” the pop-up bar and restaurant that Weller Entertainment operated last summer at West Covington Park – and now plans to expand. (Facebook)

Last summer, Weller Entertainment “activated” the space, which it dubs South Point, with a cluster of small tents and food trucks – open Thursday through Saturday – as “a pop-up open air bar, restaurant and event space.”

“They really want to expand to a more permanent facility to get people excited about coming to Port Covington,” said South Point’s lawyer, Caroline L. Hecker, at the Liquor Board hearing where the transfer was briskly approved.

Hecker said the company had invested $1.4 million in the project, is hiring private security and that managers would “card everyone who appears to be under 35 years of age.”

Skipped over amid the excitement about the new al fresco venue is this fact:

This stretch of land was treated – by the city officials who subsidized, improved and eventually opened it and by the public that enjoyed it – as a public park before it was sold to Marc Weller.

Weller is co-founder, along with Under Armour CEO Kevin Plank, of Sagamore – the company undertaking the Port Covington redevelopment project on the South Baltimore waterfront.

Land was to Stay Accessible

Explaining how the parcel became a privately-owned entertainment zone for millennials drinking craft cocktails and pitching corn-hole requires some back story.

Twelve years ago in 2007, the city sold the land – 101 West Cromwell Street – to the Center for Aquatic Life and Conservation (CALC), a subsidiary of the National Aquarium, at the bargain price of $148,000.

As part of a 100-page land disposition agreement, CALC was not only required to build the Aquatic Life Center (it never did), but to meet a number of other requirements. 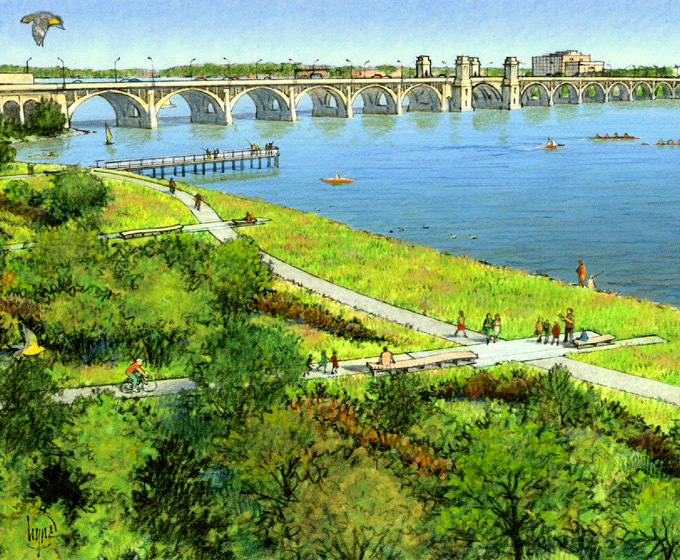 No construction was to be permitted within 100 feet of the shoreline. A buffer zone was to be created in accordance with Chesapeake Bay Critical Areas regulations. And the land along the shoreline was to remain open and accessible to the public. It also states that the property must be used for the same purposes that the city required when it sold the land to CALC.

Before Sagamore bought it, the park was included in mock-ups of the company’s future plans.

It was shown as a wooded green space in renderings released by Weller and Plank ahead of Sagamore’s receipt of $660 million in TIF tax increment financing from the Rawlings-Blake administration in 2016. 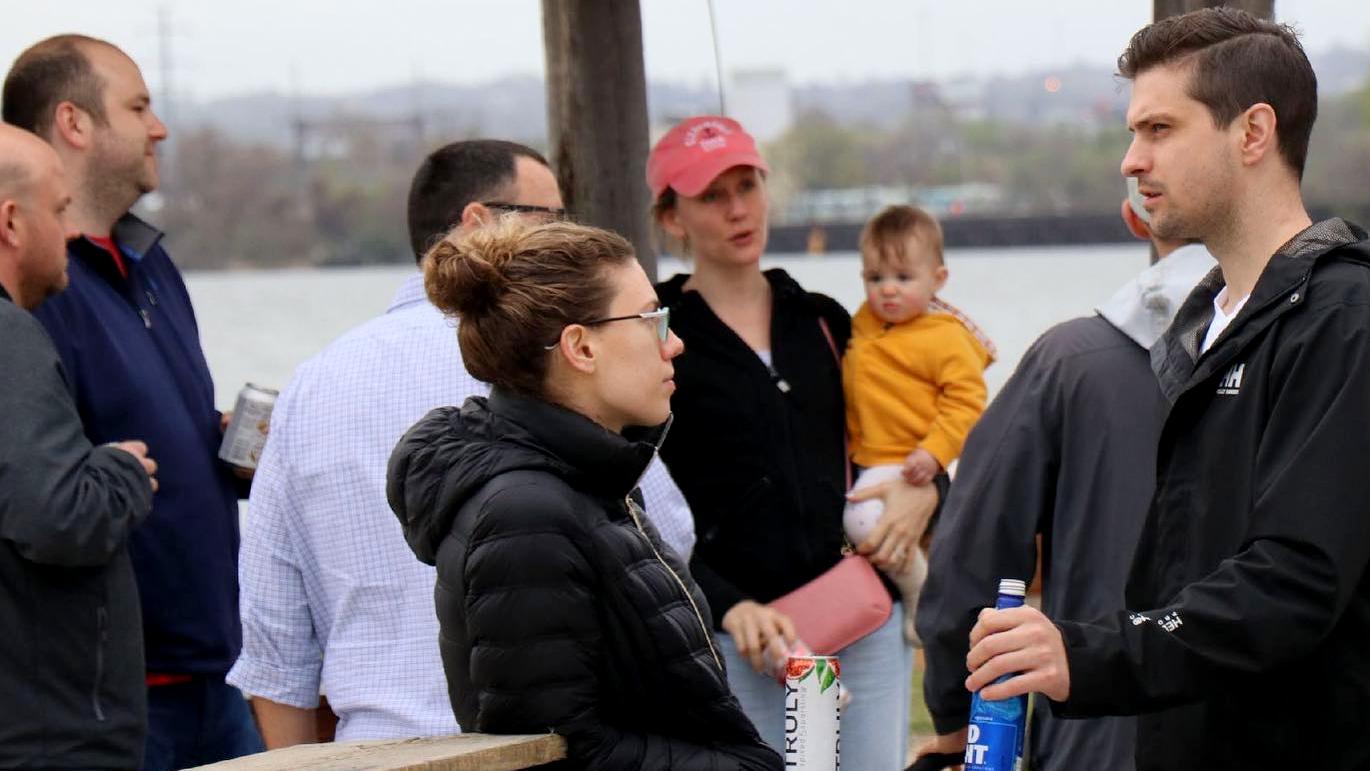 “We will do our part”

So what about public access now that the property is in private hands?

“All of the land acquired as part of that transaction was and is private property and allows for public access to the waterfront through use of its walking trail,” Erin May, president of Weller Management, said in an emailed statement. 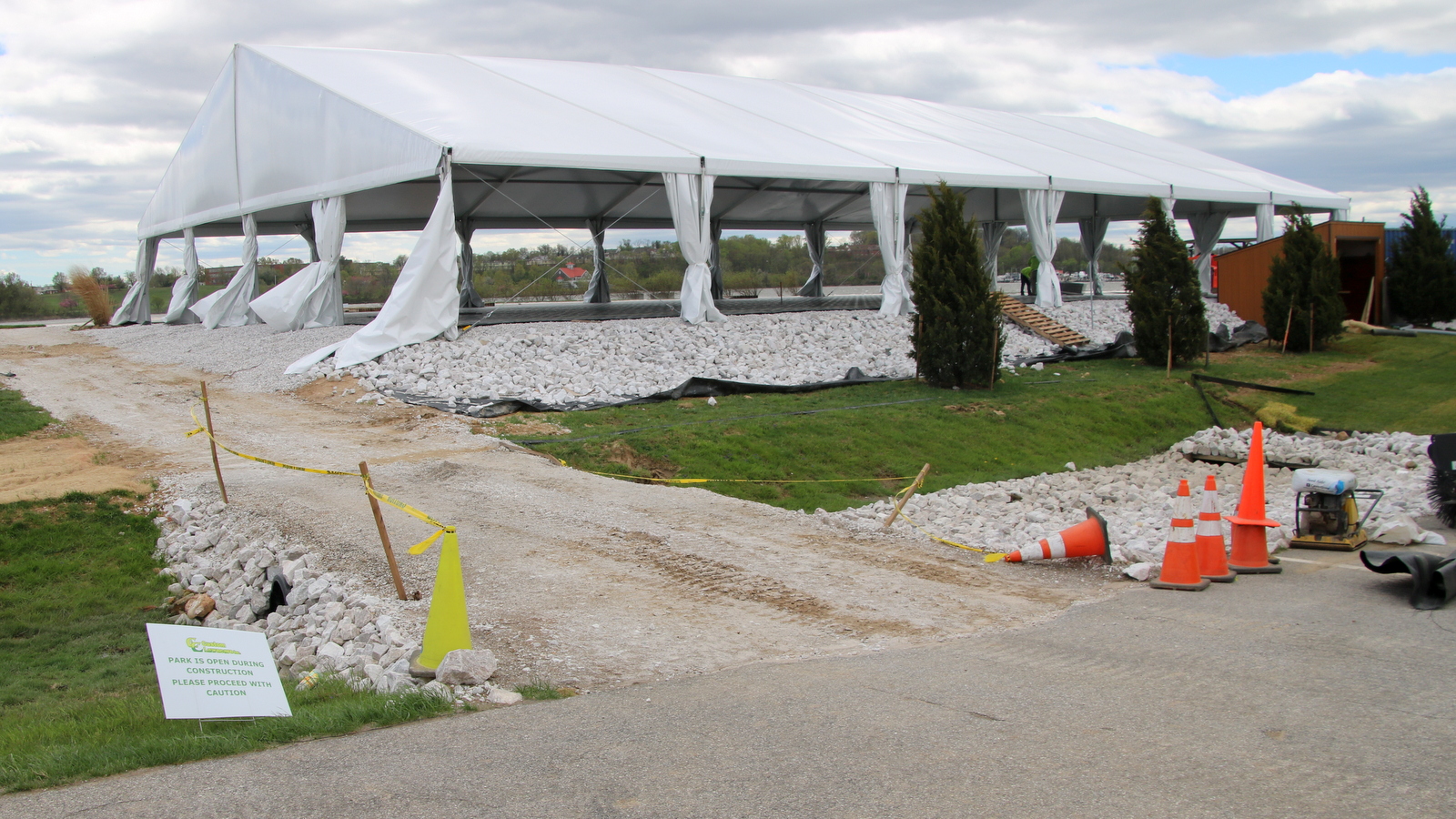 The owners of West Covington Park are erecting a tent for the open-air bar and restaurant they plan to operate there this summer. (Fern Shen)

He continued, “We are staunch supporters of environmental and wildlife habitat preservation and will continue to do our part to ensure the waterfront is publicly accessible, restored and enhanced for all of Baltimore City residents and visitors to enjoy.”

Weller Development is also working with Parks & People on a planning process to revitalize the Middle Branch waterfront and plans a shoreline restoration program, May also said.

Soon after Weller purchased the land from the aquarium, however, the company was no longer bound by the LDA.

In one of his early acts as Mayor Catherine Pugh’s new housing commissioner, Michael Braverman signed off on “a certificate of completion” on August 22, 2017. 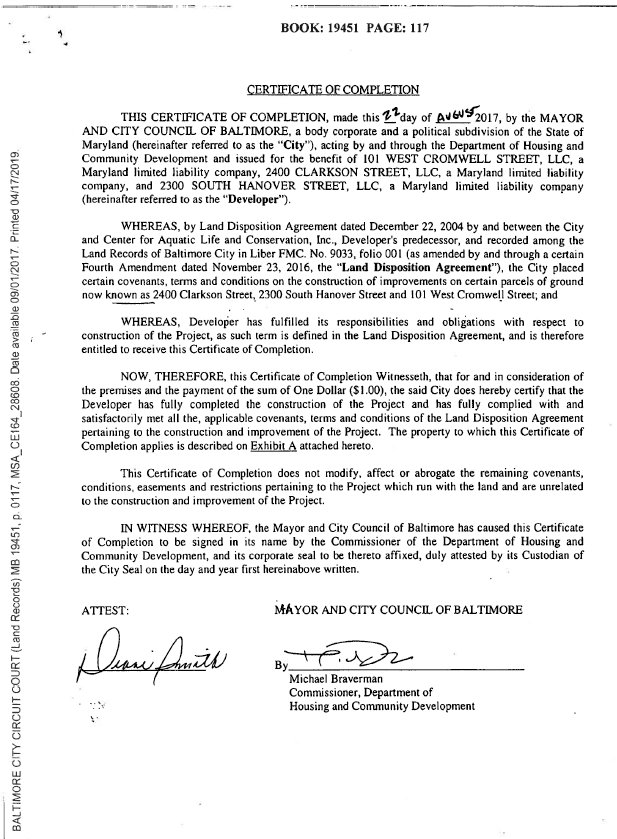 August 22, 2017 “Certificate of Completion” on the Land Development Agreement for 101 West Cromwell Street.

The one-page document, provided to The Brew by Weller, declares that “the Developer has fully complied with and satisfactorily met” all of the LDA’s conditions “pertaining to the construction and improvement of the project.”

With that statement – plus the payment of a $1 fee to the city – the LDA was extinguished.

The certificate appears to give Weller unencumbered rights to use the property as any private landowner could – including restricting public access.

What about the removal of trees? Photos taken by The Brew and by readers who frequent the park show bushes and young trees were once growing in and near the spot where the South Point tent is rising.

“It looks like 150-200 trees were removed, and that doesn’t count native grass and shrub gardens,” Bers said, based on viewing satellite photos.

May said that the trees had to be removed by the Weller group.

The trees and vegetation removed from the site were described by a Weller representative as “in decline” or “not viable.”

“When the property was acquired, a significant portion of the land and vegetation needed to be reconditioned and restored,” he said in his statement.

“Overall, much of the plant life was in decline, but we were able to transplant a portion of the vegetation and removed the remaining that was not viable.” 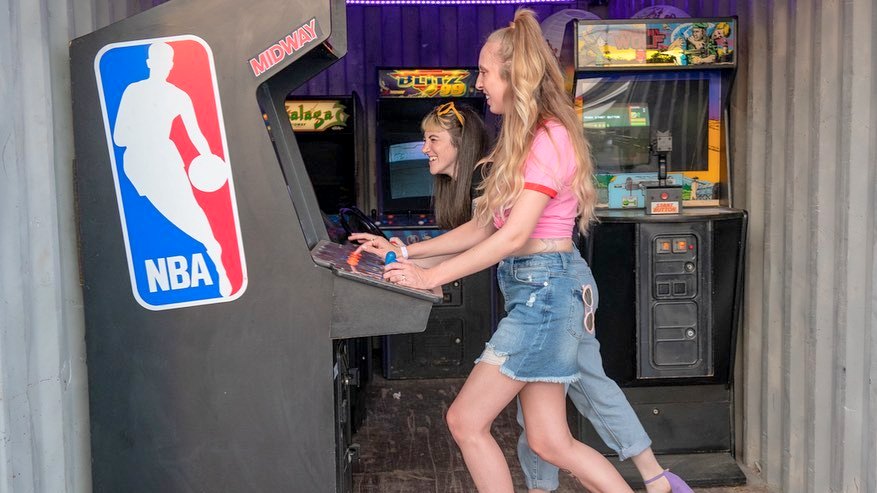 Who had planted the trees? Weller’s people said it wasn’t them.

“In previous years and under the stewardship of the prior owners,” May said, “public funds were used for environmental remediation and infrastructure improvements on the southern edge of Port Covington.”

His answer points to city government.

Erik Dihle, the city arborist and chief of urban forestry, promised to research what was planted at the site and how much the city spent.

But he has yet to provide answers.

“It would have been neat”

What exactly does Weller plan for the spot in the future?

Saying he is currently focused on ground-breaking elsewhere in the development, Weller said the company is “committed to ensuring the waterfront is publicly accessible, restored and enhanced for all city residents.” 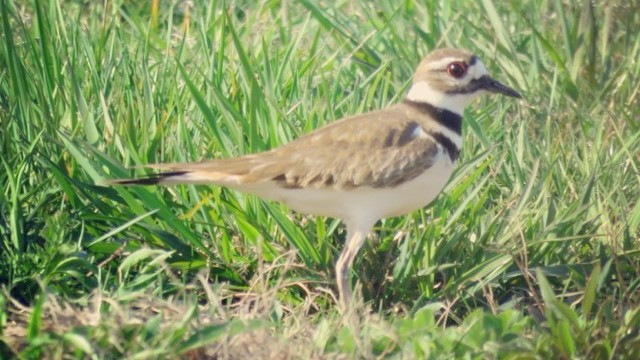 A kildeer in the grass at West Covington Park. (Noah Bers)

Skeptics have a different take on the situation.

Noting that the city has lost the leverage of the LDA, they believe the property will inevitably become a destination more for bar-hopping than bird-watching.

”It now seems like the entire park is being redone for the benefit of Weller Development.”

“It now seems like the entire park is being redone for the benefit of Weller Entertainment,” Molino said.

Explaining that 88 bird species were observed at West Covington Park in 2015 alone, Bers said he had been “looking forward to watching that park change as all the trees and plants matured. It would’ve been a neat little wildlife sanctuary.”

Considering the millions of public dollars spent to make that happen, “it seems like a lot of money was wasted,” he observed. 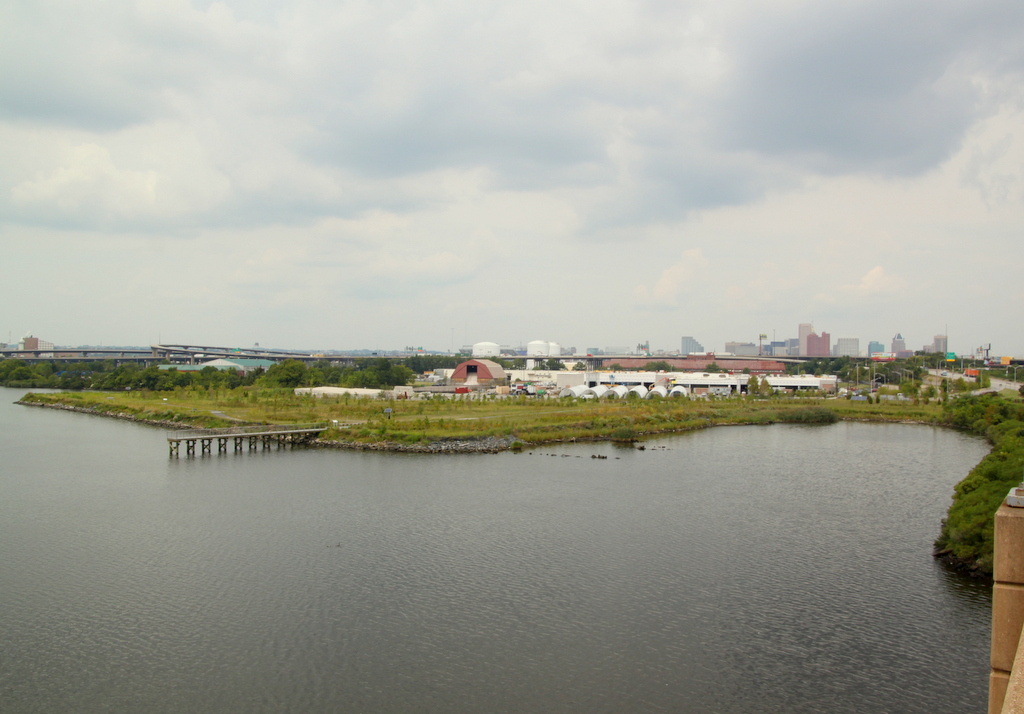 How West Covington Park looked before it was opened to the public in 2015. (Fern Shen)