“Finally, the day has arrived – and I say, finally,” Rawlings-Blake said at a City Hall signing ceremony.

“Was that an exhale I heard?” she quipped, turning to the throng of city lawmakers in attendance, along with officials from surrounding communities and from the Sagamore Development Co., the real estate arm for Under Armour CEO Kevin Plank.

Plank’s plan for a mixed-use development comprised of shops, hotels, restaurants and apartments on a 260-acre waterfront peninsula will be “one of the most significant development milestones in Baltimore’s modern history,” the mayor said. 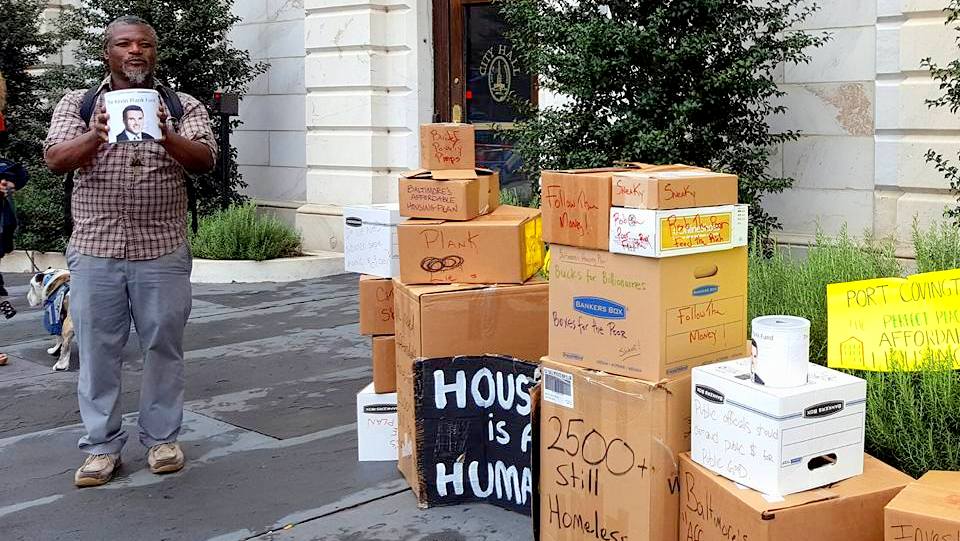 Sagamore Development spent more than $1 million promoting Port Covington. Anthony Williams voiced his objections to the deal with a cardboard-box protest in front of City Hall. (Housing Our Neighbors)

“We are setting the stage for a stronger Baltimore. We are mobilizing  our resources to build hope, to build opportunity and equity for all of our residents,” Rawlings-Blake said.

“Port Covington,” she added, “will be a catalytic project, creating new jobs, and job training opportunities as well as supporting minority and women-owned businesses and affordable housing.”

The benefits she described were at the core of the controversy that raged over the past six months as Sagamore Development sought TIF funds for the project’s infrastructure at a level that dwarfed all previous public subsidies granted for Baltimore developments.

Observers describe it as among the largest such financing subsides ever granted anywhere in the nation.

Critics charged that the project would worsen racial segregation and inequality in a city that  exploded last year with protests and a riot following the death in police custody of a 25-year-old West Baltimore man, Freddie Gray.

A coalition of labor unions, housing advocates, the American Civil Liberties Union and others said the agreements were riddled with loopholes and would not prevent the  development from becoming an upscale predominately white district.

The complex financing that undergirds the deal also attracted attention, with an outside consultant and others saying the TIF was poorly structured and based on overly rosy projections.

As some members acknowledged they had not read the agreements, the City Council last week cast the final vote to move the project forward, saying they had faith in the Under Armour founder.

The legislation signed by the mayor today starts a 30-year cycle of construction – and the prospect of 40 years of bond payments – that Plank and his associates plan in order to erect their mini-city.

Rawlings-Blake understated those time commitments in her remarks, but expressed the overall sentiment of City Hall by saying that Port Covington would be providing benefits “long after I’m gone.”

“For the next 20 years,” she said, “we will be part of making an underutilized area of Baltimore into a thriving, inclusive community as well as an economic center.”