Next Tuesday the new water and sewer billing system begins in Baltimore.

Bills will arrive in the mail monthly instead of quarterly, and rates will commence a sharp increase – charges will rise 9.4% per year or almost 30% over three years.

But even before it takes effect, the new “smart” BaltiMeter system has triggered a flood of complaints, thanks to final quarterly bills that arrived last month with charges that some customers say are confusing, erroneous and outrageously high.

“Mine is usually around $180/quarter and this one is $498. . . If you need me, I’ll be in the corner hyperventilating,” said Autumn Fares, of Hampden, writing on the NextDoor community website.

Acknowledging the latest bills may be “an inconvenience” for customers, city officials said the unusual charges were necessary as part of the shift from one billing system to another.

“Because we had to send final bills to all of our city customers, we had to compress a wide billing period into a much shorter one,” said Jeffrey Raymond, spokesman for the Department of Public Works.

“That resulted in some bills being short, while others – who might have typically received a quarterly bill in August – were extended further than typical,” Raymond said, providing a link to the city’s August press release warning customers about the irregular bills they would receive as part of the transition.

Councilwoman Mary Pat Clarke said she has been “swamped” with complaints and is still trying to document the problems to determine whether there is a pattern.

“It’s very upsetting for people because they are getting bills that came in toward the end of September that are in excess – a lot in excess – of the norm,” she said.

The city’s explanation has satisfied some customers, who say they will give DPW the benefit of the doubt until the first monthly bill arrives under the new system.

“I was initially pretty shocked. . . However, upon a bit more analysis, I think it looks fine,” one writer said on NextDoor.

But others remain unsatisfied, saying the billing system switchover does not explain other inaccuracies, in particular being billed for drastically increased consumption.

“I’m a water miser,” said Fares, 39, whose household includes only her teenage son, who lives with her part of the time.

“I mean this summer I put out buckets to catch the rain to water my garden,” Fares said, noting also that she uses the water-saving settings on her dishwasher and washing machine.

Fares said her usage has reflected her frugal ways,  hovering between 115-135 gallons per day according to previous bills. But in her September bill her usage skyrocketed to 308 gallons per day.

“I was flabbergasted,” she said, noting that neighbors have reported bills showing the same false spikes in consumption and dramatic increases. “Something is fishy.” 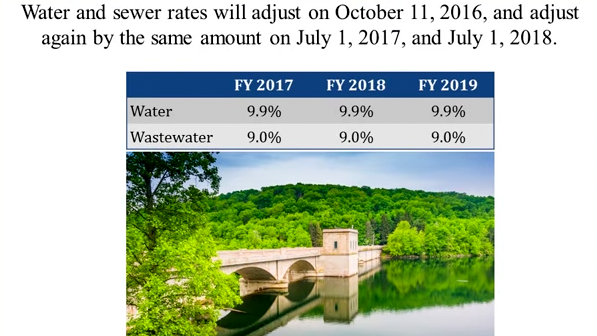 Rate increases coming in the next three years. (Baltimore Department of Public Works)

Among them was a North Baltimore woman who, likewise, lives with a teenager, says she uses little water and received a dramatically higher bill last month: nearly $600 for 69 days.

“The city claims that on certain days there was an enormous spike in my usage – to ONE HUNDRED times the usual,” the woman said on NextDoor, where North Baltimore residents have been complaining furiously about the new bills.

“It’s Class Action Lawsuit time. . . Time to get the city to justify their whimsically turning a billing quarter into whatever they feel like,” a Woodberry man urged others on the site.

“I Cannot Afford Any of This”

Another change was the elimination of minimum usage fees.

Before taking the vote, the spending board heard at-times wrenching testimony from residents, who said they are already unable to pay water bills that saw a 42% increase over the last three years.

“Living on a fixed income, I cannot afford any of this,” said Alexis Schofield, addressing Mayor Stephanie Rawlings-Blake and four other members of the panel.

Her voice shaky, Schofield said, “I simply cannot afford to pay an additional $50 a month. The way it is now, you write out your bills and barely have enough to pay for yourself to eat.”

“I have worked since I was 17 years old, and I have nothing to show for it except the childhood home I live in,” Schofield said.

Added Margaret Henn, of the Baltimore Tax Sale Working Group, a coalition of city non-profits and other advocates:

“Members of our group have worked with clients in legal services who were raising children in homes with with no running water who are unable to shower in their homes because of lack of water, and it’s not uncommon that we would see someone with water bills in excess of $1,000.”

Some witnesses assailed the city for changing to monthly bills, a switch DPW has said will “make it easier for customers to manage household budgets, detect leaks sooner and find opportunities to decrease water usage.”

“Monthly billing is not beneficial or convenient to the consumer,” Chris Stadler said. “Who wants to sit down every month to write out a check. It’s a nuisance.”

City officials said the increases are needed to pay for the cost of repairing the city’s aging infrastructure, citing among other things the recently renegotiated federal consent decree requiring the city to repair leaky sewers and stop polluting local waterways, Baltimore’s harbor and Chesapeake Bay.

(Rawlings-Blake and the other two members of the board she controls voted for the increase. Comptroller Joan M. Pratt and Council President Bernard C. “Jack” Young voted against it.)

Several witnesses who testified expressed skepticism about the argument that water customers should share so much of the burden of repairing the city’s leaky water and sewer system.

“Why should everyone have to pay for it now, at this moment in time when it’s been going on for 200 years and everyone neglected it?” said McDonald McBride. “The city could still finance it so that way there is less hardship on the people.” 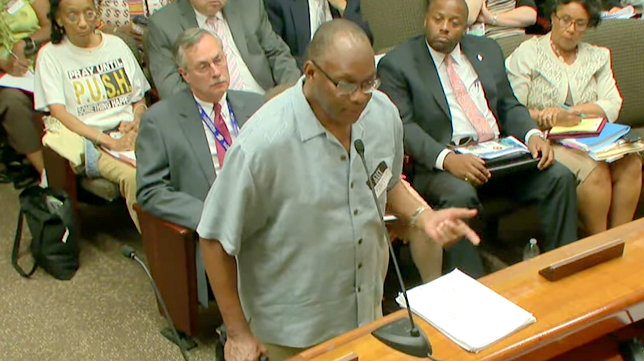 Taxpayers uniformly spoke out against the new water rates and billing system at the board of Estimates’ hearing and vote in August. (YouTube)

Stephen Carey, meanwhile, is skeptical about the high final quarterly bills that have seemed so out of line to him and many others.

“Either this transition to the new system is just really bumpy or there is something seriously wrong here,” said Carey, whose post on NextDoor about his got well over 100 responses in a few days.

The Medfield man said he and his wife are also careful with their water usage (“We use the dehumidifier water to water the plants”), but saw a sudden jump in the consumption his bills indicated.

“We went ahead and paid it because we didn’t want any trouble,” he said. “I’m sure there’s people, though, who can’t afford to do that and there are going to be some shut-off notices. And that’s a real shame.”