Workers haven’t quite finished spray-painting the lines and planting the white “flex-posts” in the roadway, but the Maryland Avenue Cycle Track has already sent a thrill through the biking community and attracted a steady stream of early adopters over the weekend.

“Fantastic! Good for Baltimore for doing this!” bike rider Jon Dewitt said, pausing where the new bike lane crosses 26th Street on a windy Sunday morning. “When will it be done?”

The two-way, north-south lane on the east side of the road, protected from moving traffic by a line of parked cars, was long sought by advocates who say Baltimore’s bike infrastructure lags behind that of other cities.

The new cycle track – to stretch 2.6 miles from 29th Street to Pratt Street – is meant to safeguard cyclists, encourage hesitant would-be bikers to get out of their cars and bring Baltimore in line with more “bike-friendly” cities.

Bogged down by years of bureaucratic delay, it should be completed by the end of the month, city transportation officials say.

Dewitt said he is hoping the new lane can be a better north-south route for him between his home in Charles Village and his downtown job.

“I’m thinking it will cut down on me having to drive, especially in the summer,” Dewitt said. “I hate always taking the car but riding [a bike], especially on Charles Street going north, is a traffic  nightmare.” 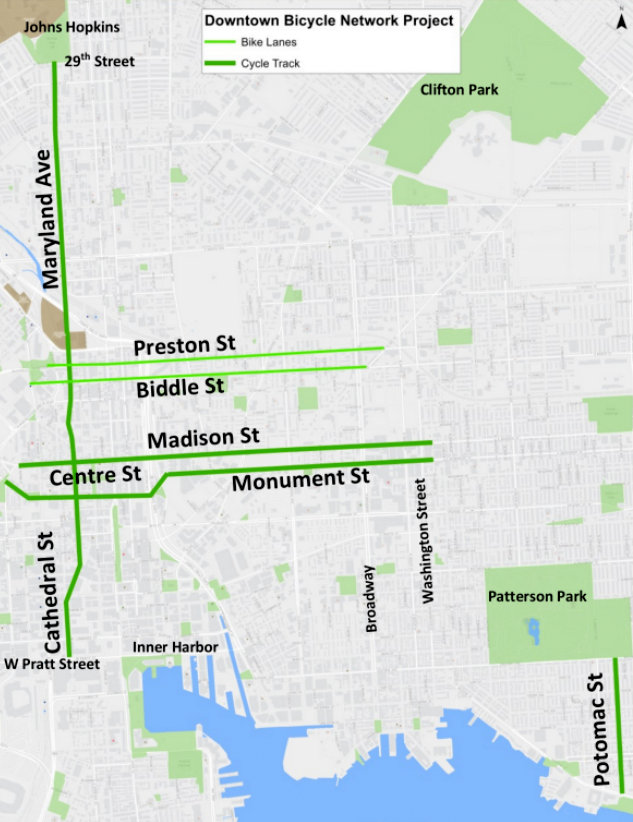 Liz Cornish, executive director of the advocacy group Bikemore, said the Maryland Avenue lane, unlike other bike lanes that are the result of “more compromise,” is built to high-quality standards that “will make more people comfortable with riding a bike in Baltimore.”

“The sheer size of it is also significant,” Cornish said. “This is the city’s first attempt at establishing a coordinated network of bike lanes. In the past it was only road re-surfacing that brought about the addition of new lanes.”

Members of her organization  – “Should we throw a party?” one asked online – are clearly excited and eager for final fixes to be made.

Over the weekend, Cornish herself was out clipping some of the tree branches drooping over the northbound side of the lane.

Amid the high-fives, there have also been complaints about the new track, which eliminates one of two vehicular traffic lanes and, according to Department of Transportation spokeswoman Adrienne Barnes, as many as 25 parking places.

Meg Fairfax Fielding, who owns buildings on Maryland Avenue between Preston and Biddle, said property owners were not notified or consulted and that a lack of signage at this point makes the cycle track confusing and dangerous for motorists and bike riders.

“I just think cyclists are getting too much preference,” she said. “People who use Maryland Avenue are commuters, and this is going to hurt them.”

“It looks like six are being eliminated on our block alone,” she said. 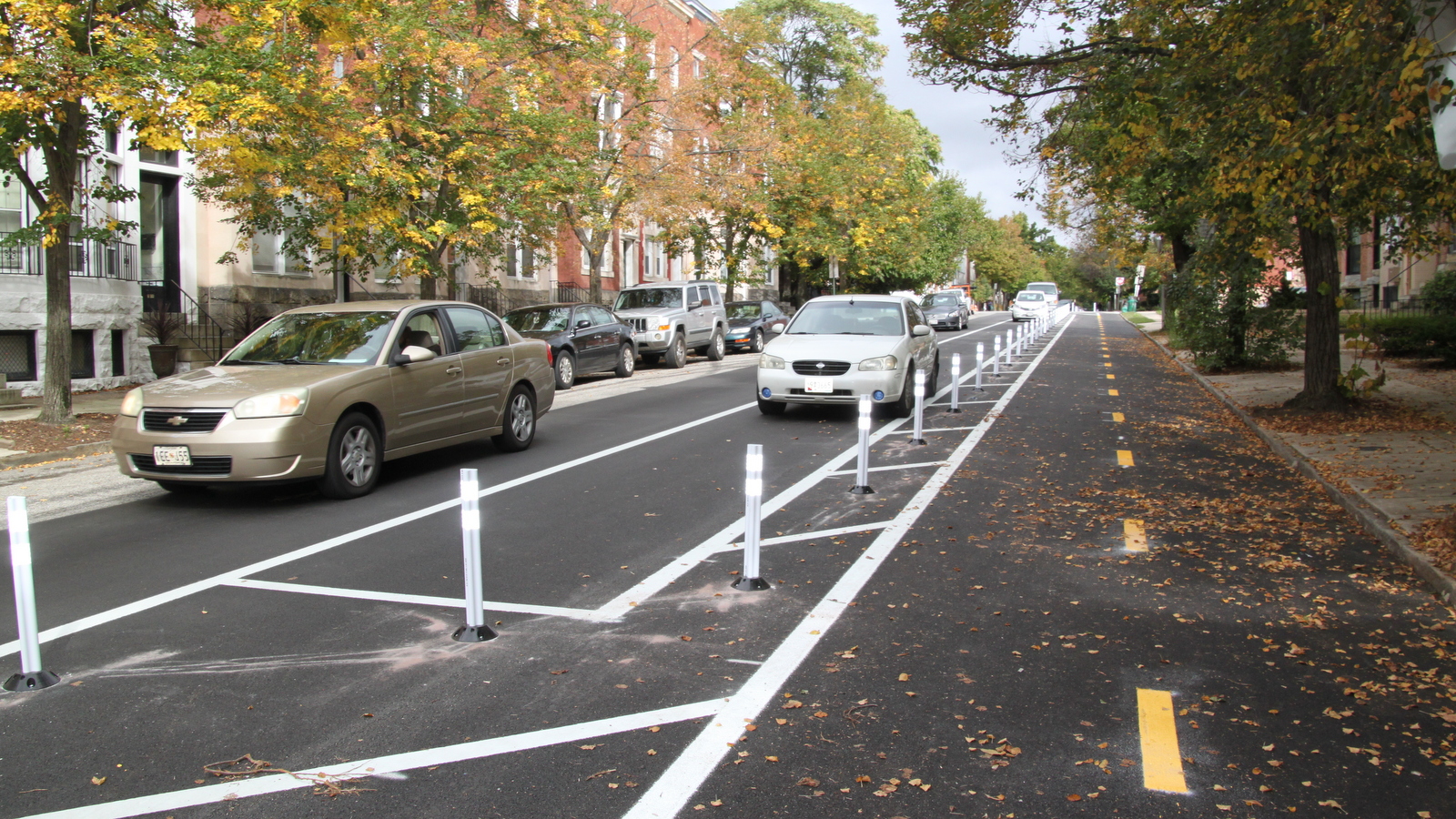 Facing north on Maryland Avenue – a one-way southbound street that will have bikes traveling north and south. (Fern Shen).

James D. Dilts said he’s been driving and riding a bike in Baltimore for 50 years and, for both modes, has always preferred less-busy Maryland Avenue.

“Maryland Avenue will now be just as congested as St. Paul and Howard, if not worse,” said Dilts, an advocate of the old “sharrows.”

Those older style bike lanes are being connected with the new Maryland Avenue bike lane as part of a broader blueprint: the Baltimore Downtown Bicycle Network.

The Board of Estimates approved $300,000 for the network in July. That spending includes $240,000 for Toole Design Group to create the Maryland Avenue Cycle Track and five connecting east-west lanes on Centre, Monument, Madison, Preston and Biddle streets. The board also approved $52,000 for consultants McCormick Taylor to complete other work on the network.

The entire Downtown Bicycle Network Project, much of it covered by state and federal funding, was bid on at $2,849,822 by P. Flanigan & Sons, Inc., Barnes said. Of that total about $700,000 was for the Maryland Avenue portion.

Getting the Word Out

Commenting on some of the early critiques of the new Maryland Avenue lane, Cornish said delays in implementation of the project over years probably contributed to the impression some had that they weren’t notified.

“A lot of work went into notifying people and that has mitigated some of the backlash,” she said, drawing a comparison with the city’s roll-out of the highly-controversial Roland Avenue Cycle Track. “We knocked on over 300 doors.” 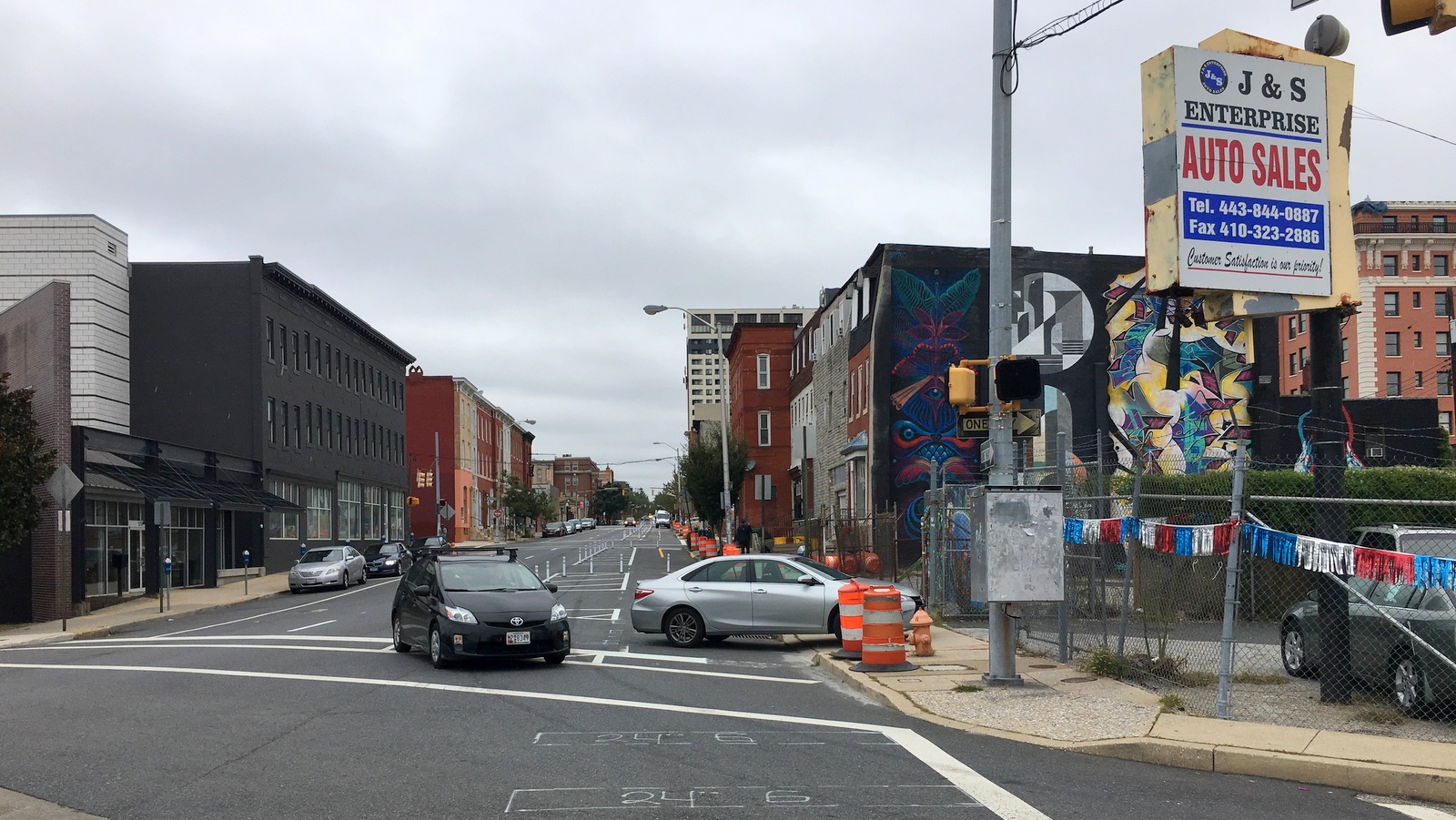 Outside an auto sales business at the Lanvale Street intersection, a car blocks both the sidewalk and bike lane. (Fern Shen)

She said improvements still to come along Maryland Avenue as workers wrap up – signage, striping on the road surface, replacement of bike-tire-grabbing grates – will iron out early problems and make for a positive experience for cyclists, drivers and the public in general.

She acknowledged another issue – bike infrastructure equity – can’t be so easily addressed.

Lawrence Brown, a professor at Morgan State University, has launched a blistering critique of Baltimore’s transportation priorities. A map of the bike lane routes (as well as Bikeshare stations and the free Charm City Circulator buses) largely coincides with the more white and affluent parts of highly segregated Baltimore, he points out.

“As you can see, the main artery runs north-south in the conventional White L,” he writes on his Baltimore Redevelopment Action Coalition for Empowerment (BRACE) Facebook page.

Brown said his group suggested having bike lanes run from Sandtown-Winchester to Port Covington or from other Black neighborhoods to future job opportunities in that planned waterfront development.

“But what are we doing instead? We are advantaging the people that already HAVE structural advantage instead of building transit nodes that connect people living in transportation deserts to jobs and opportunity,” he wrote. “In other words, its the same damn bulls**t all over again.”

Replying to him online, Cornish said “I literally don’t disagree” and pointed to a federal grant she got aimed at “undoing some of the unequal planning.”

Speaking with The Brew,  Cornish said Bikemore is reaching out to disinvested communities that haven’t had bike infrastructure to empower them to advocate for it.

“A lot of this has to do with how these things are funded and planned,” she said. “At this moment in time, certain residents aren’t asking for these things. The unfortunate reality is, the squeaky wheel gets the grease.”

The issues Brown is raising “are important and go back a hundred years in Baltimore,” Cornish said. “I am really glad he’s keeping them in front of us.” 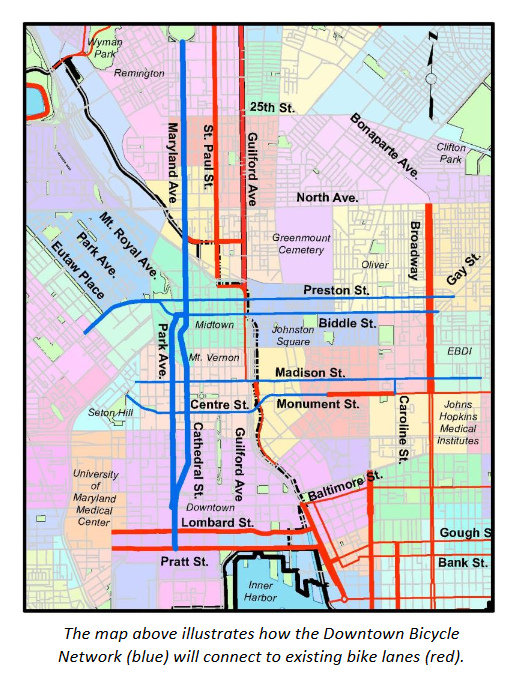