Mayor Stephanie Rawlings-Blake said today she believes in the freedom of the press, but has indefinitely suspended a public radio reporter from her weekly press conferences because he “has consistently exhibited verbally and physically threatening behavior, particularly to my staff.”

The mayor offered no evidence about reporter Kenneth Burn’s alleged behavior when she was questioned by WYPR news director Joel McCord at the same Wednesday press conference that Burns was barred from in a emailed notice sent by the mayor’s office to the radio station last night.

“That is all I am going to say,” Rawlings-Blake told McCord when he asked, “Can you tell me in what way he [the reporter] has been threatening to you or your staff?”

She earlier described the Wednesday press conference as a “very close-quarters press event” in which she has the discretion to select the reporters present.

Her press secretary, Anthony McCarthy then told other members of the press that the matter would not be discussed further.

“We’re going to be moving on. Next,” McCarthy said.

See McCord-Rawlings-Blake exchange that starts at 8:02 in the video below:

In an interview this afternoon with The Brew, Burns called the mayor’s claims “totally baseless.”

Burns has covered the mayor for the last 3½ years for WYPR, a local national Public Radio affiliate, and regularly attends the Wednesday press conference. He said he can only believe that the mayor had been annoyed by his questioning last week about her authority over the police department.

“I pressed her. I don’t deny that I pressed her. It’s on video,” he said. “And it’s unfortunate that this happened. I am totally puzzled, to be quite honest.”

Questions from The Brew, seeking comment from the mayor’s office, were . McCarthy replied late today saying, “We will not be making any further comment on Kenneth Burns.” 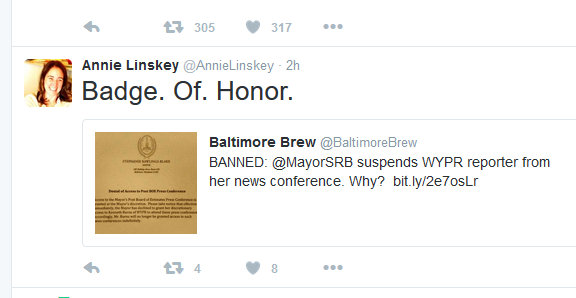 “It is unfortunate that the mayor has chosen to limit access to our City Hall reporter and pick and choose who gets to ask her questions,” Bienstock said.

“We take allegations of misconduct seriously, but so far have not found any corroboration. It seems that Kenny is guilty of insistently asking the mayor questions she did not want to answer – and that is precisely what we expect our reporters to do.”

Within hours, the Brew story had brought national coverage and widespread condemnation, especially from fellow members of the local press corps, who began tweeting Burns’ plight with the hashtag #freekenny. (Burns tweets at @PKBNews.)

“The mayor’s description of PKBNews comes as quite the surprise to those who have worked next to him for years,” tweeted Daily Record reporter Bryan P. Sears.

“Is this a banana republic? Come on, man!! #FreeKenny” Maryland Public Television reporter and commentator Charles Robinson wrote on Facebook.

“This is petty. Being questioned about policy is part of your job as Mayor. Is this your legacy with less than two months to go in your administration?” the letter read in part.

“This video demonstrates nothing more than the kind of persistent press that makes our democracy stable,” he wrote. “#Rescindban”

Rawlings-Blake herself entered the fray at one point on-line today, charging that Burns’ fellow local journalists have seen him behaving improperly.

“Suggesting that bc the press won’t admit to seeing it that it didn’t happen is awfully ironic 4 truth seekers,” she tweeted in an exchange with WBAL’s Jayne Miller.

“This is horrifying,” wrote Julie Bykowicz, a former Baltimore Sun reporter who is now at the Associated Press.