In the packed room, a woman simply put her child’s empty stroller on top of a table and another, seeing no seats and many people leaning along the wall, sat down on the floor.

What brought about 150 people to an occasionally tense meeting in Hampden last night was a proposal by Himmelrich Associates to transform the Pepsi plant below the Jones Falls Expressway into a mixed-use community with retail, offices, a supermarket and 300 to 400 apartment units.

But the specific purpose for the “emergency” gathering, as 7th District Councilman Nick Mosby described it, was rezoning for the project.

Mosby said he is looking for community consensus on the site’s zoning designation as the City Council enters the final stages of TransForm Baltimore – a byzantine city-wide zoning process with high stakes for developers and community members alike.

Four years after the sweeping rezoning bill was introduced – and only days away from an expected Council vote on the measure – even neighborhood leaders can’t make sense out of the new zoning categories.

“We have had to guess how many units would be permitted. . . There have been amendments and amendments-to-amendments. It is complex and it changes,” Shannon Dawkins Wrenn, president of the Hampden Community Council (HCC), said of the TransForm process. 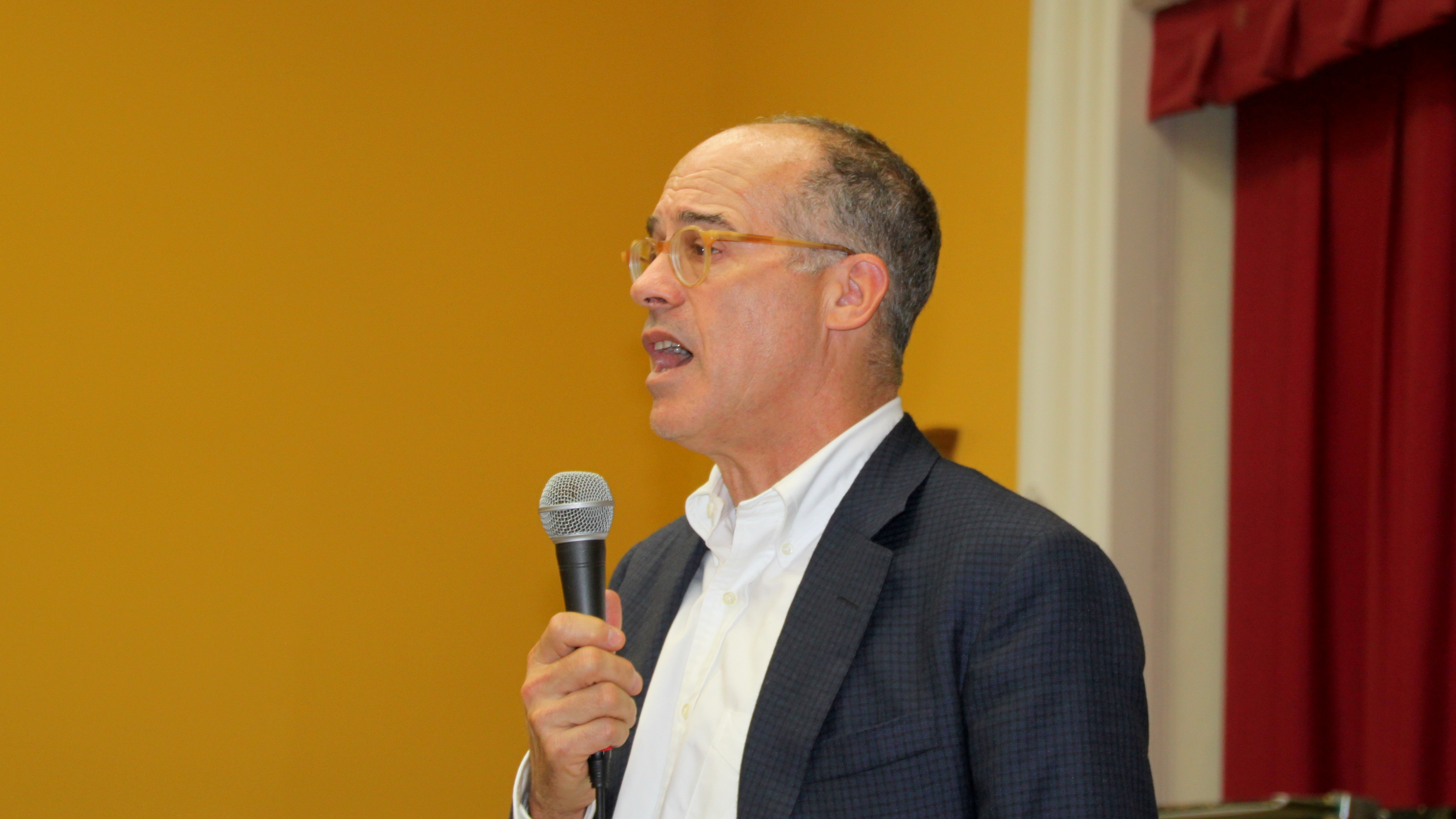 Last night HCC announced its “strenuous opposition” to three amendments in the TransForm bill that would give Himmelrich the TOD-4 (Transit Oriented Development) zoning it seeks.

The association said the rezoning process “is not the forum to consider new large-scale development projects” given the paucity of concrete details about the Pepsi project.

Leaders of the Woodberry Community Association support IMU (Industrial Mixed Use), another of the new zoning designations under TransForm.

That split was on display last night as residents spoke up to express their fears and hopes about the project.

“I don’t see how this is going to work without better traffic mitigation,” a Hampden woman said, raising a concern voiced by many about the impact of hundreds of new residents and workers on the area.

“What can you offer us so we can get in and out of our house on a Saturday? So we can walk safely on the streets?” she asked.

Angelo Leto Barone, of Woodberry, meanwhile, stressed the benefit of replacing the industrial-looking Pepsi plant with new offices and shops.

Some residents said the redevelopment would boost their sagging property values, while others said “quality of life” is more important to them. 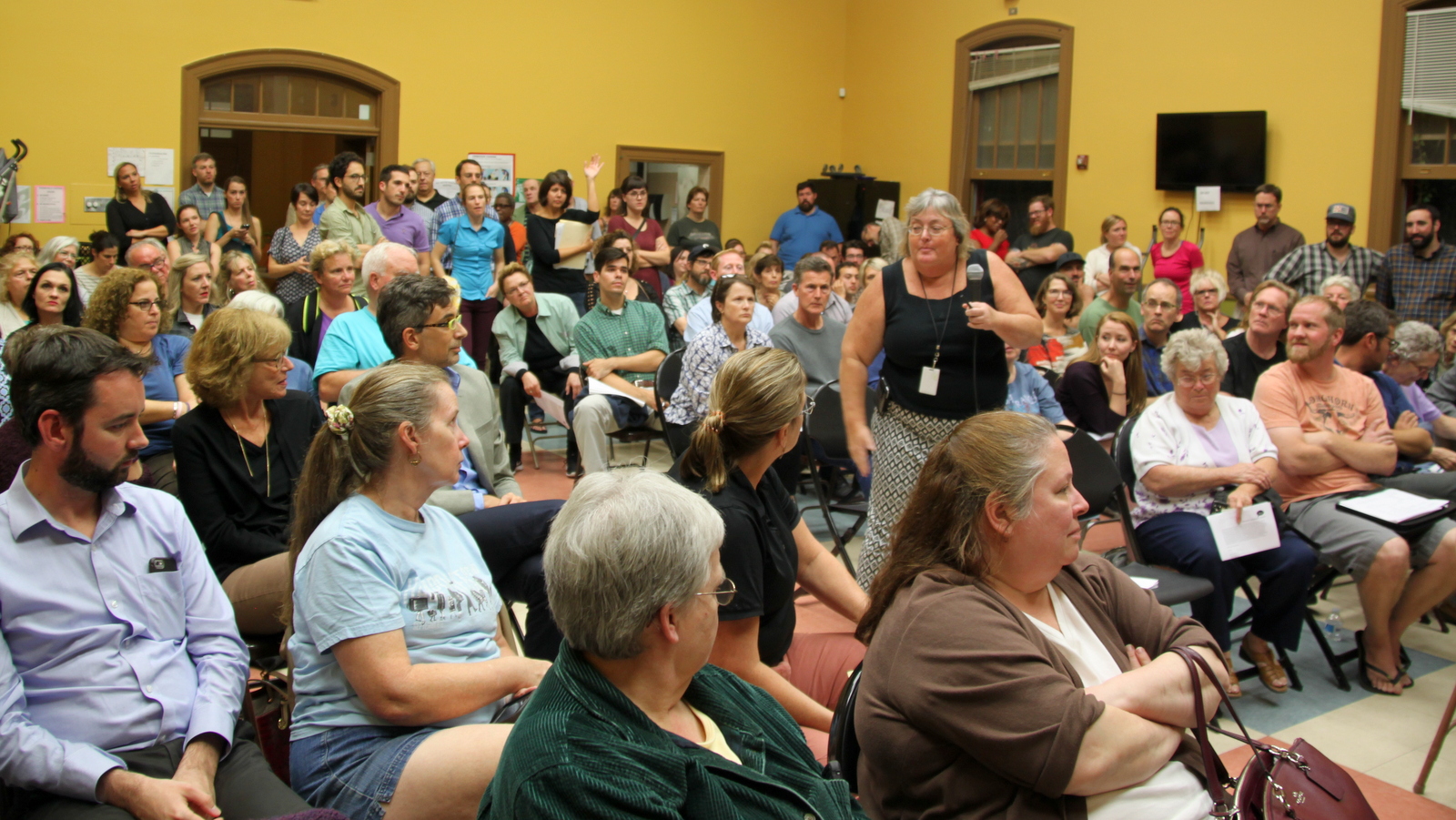 Himmelrich bought the property a year ago. It consists of three parcels bound on the south by Union Avenue, on the north by 41st Street, on the west by the JFX, and on the east by Buena Vista Avenue.

Jacob Himmelrich urged the audience not to believe reports that the developer has a commitment from the high-end grocer Harris Teeter. He also said the retail would be a mix of local businesses and national chains.

The company anticipates “a mix of studios and one-bedroom apartments aimed at millennials and empty nesters.”

Those details – plus an estimate that the project might generate 630 construction jobs and 585 permanent jobs – represent “our latest and greatest thinking, but are subject to change based on the market.”

Rush to Wrap up Zoning

Residents grilled Himmelrich and his father, Samuel K. Himmelrich Jr., about their plans, with one woman asking how they could say the project would be community oriented “when you’re bringing in millennials who will not stay there?”

But the pressure was even more intense on Mosby and Laurie R. Feinberg, the city’s assistant planning director, to explain what they said is an urgent need for the communities to get behind some zoning designation under Transform.

“I thought it was inappropriate for me to leave office with this dangling over your head,” said Mosby, who ran for mayor rather than seek re-election to his Council seat.

“There will be zoning on the property one way or the other,” Feinberg told the gathering. Whatever the new zoning will be, she assured them, there will be a development review and traffic impact study.

“We always work with community groups on changes in development, and this developer has always been very cooperative about that,” she said. “There’s this perception that if there’s a change in zoning from heavy industry to something else that that will be the last you’ll see and the shovel goes into the ground.” 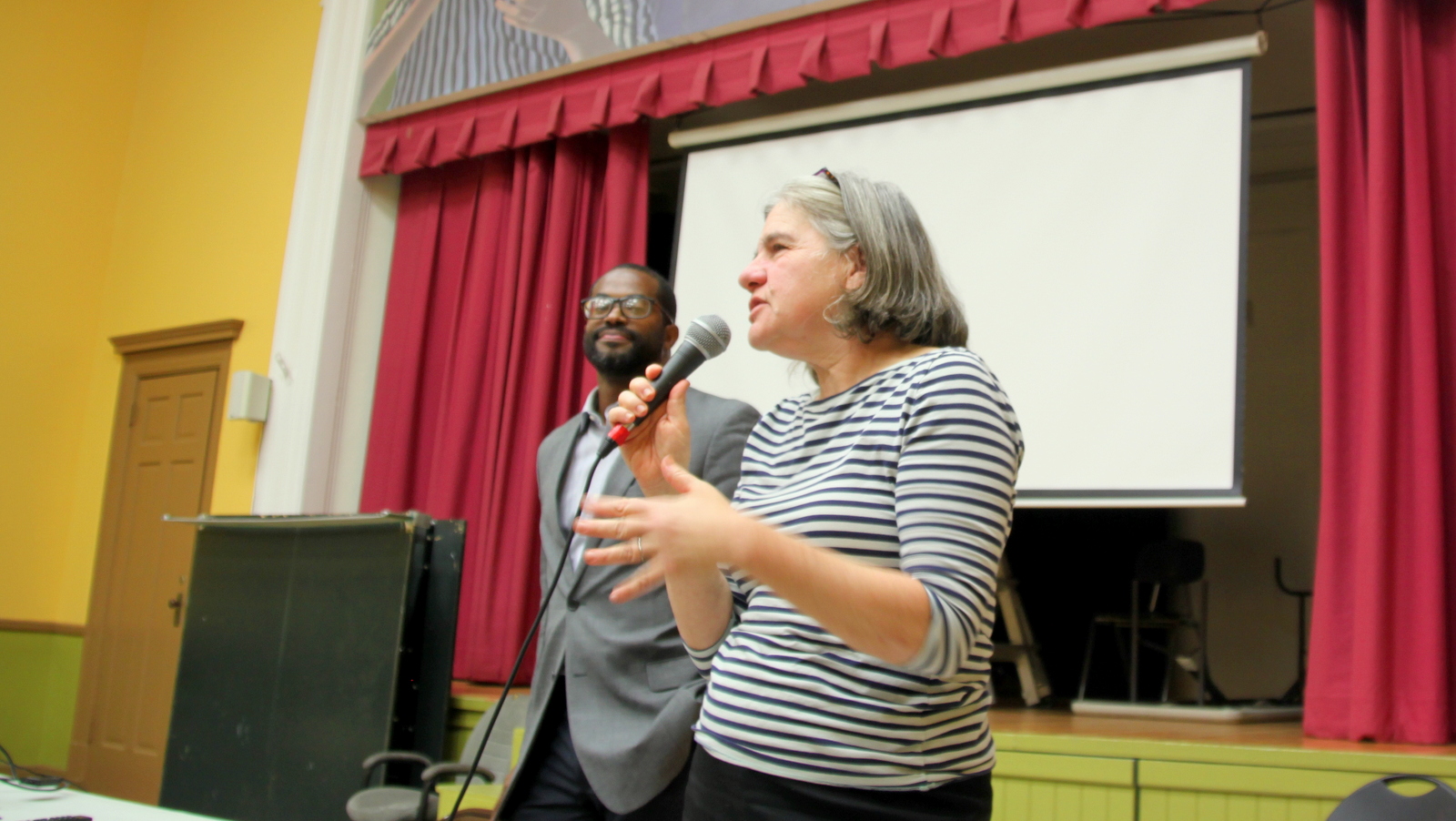 Mosby noted that, bowing to community opposition, he has been on record opposing TOD-4. Leaving the property under its current Industrial zoning represents a risk, Mosby and Feinberg warned the audience.

Jacob Himmelrich spoke of that risk explicitly, saying that without new zoning the company would need to get a return on its investment through an industrial tenant.

“We would go out and approach industrial leasers, brokers.” Reached after the meeting, Himmelrich said he couldn’t discuss in detail how the zoning categories would impact their project. “The city’s really the last word on that,” he said.

Meanwhile Dawkins Wrenn, of Hampden, said that she has been struggling to figure out just how many units, how much parking and how much height would be allowed under the categories under discussion for the parcels.

“You’d think at this point that it would be straightforward and clear,” she said. “But it’s not.”