A political veteran who previously ran for mayor twice (losing to Sheila Dixon in 2007 and to Stephanie Rawlings-Blake in 2011), Pugh declared victory tonight in the mayor’s race with a preliminary finish of about 58% of the vote.

At a victory party at the Radisson Hotel downtown, 66-year-old Pugh thanked a roomful of supporters and vowed to work with the new City Council and the city delegation in Annapolis.

“We got, I believe, a great road ahead of us,” she declared. “We all have a responsibility to make this the greatest city in America.”

Former mayor Dixon, who was a close second to Pugh in the April primary, tried to defeat her again in the General Election with an 11th hour write-in.

It wasn’t enough, but considering the late start of four week ago, her effort ended respectably. The unofficial tally by the Baltimore Elections Board gave “Other Write-Ins” (presumably mostly Dixon votes) nearly 23% of the total cast.

Green Party candidate Joshua Harris, who mounted a left-of-center challenge to Pugh in Democrat-dominated Baltimore, came in with 10% of the vote.

Republican Alan Walden, a former WBAL radio host, also ended with about 10% of the vote, according to the results posted on the elections board website.

Lower down on the ballot, there were no electoral surprises, with the Democratic primary winners coasting to victory in the general election.

In the 1st District, Republican Matt McDaniel finished with about 33% of the vote – not enough to defeat the Democratic nominee, Zeke Cohen, who ended with about 66% in the unofficial tally.

McDaniel had hoped to win support through his association with Republican Gov. Larry Hogan, who won the southeast district in 2014. Cohen will replace Councilman James B. Kraft, who stepped down to make an unsuccessful bid to win a circuit court judgeship.

Another spirited challenger, the 3rd District’s G. Andreas “Spilly” Spiliadis of the Green Party, got 14% of the vote. But Democrat Ryan Dorsey, won the rest. They were vying to replace Councilman Robert Curran, who did not seek reelection. 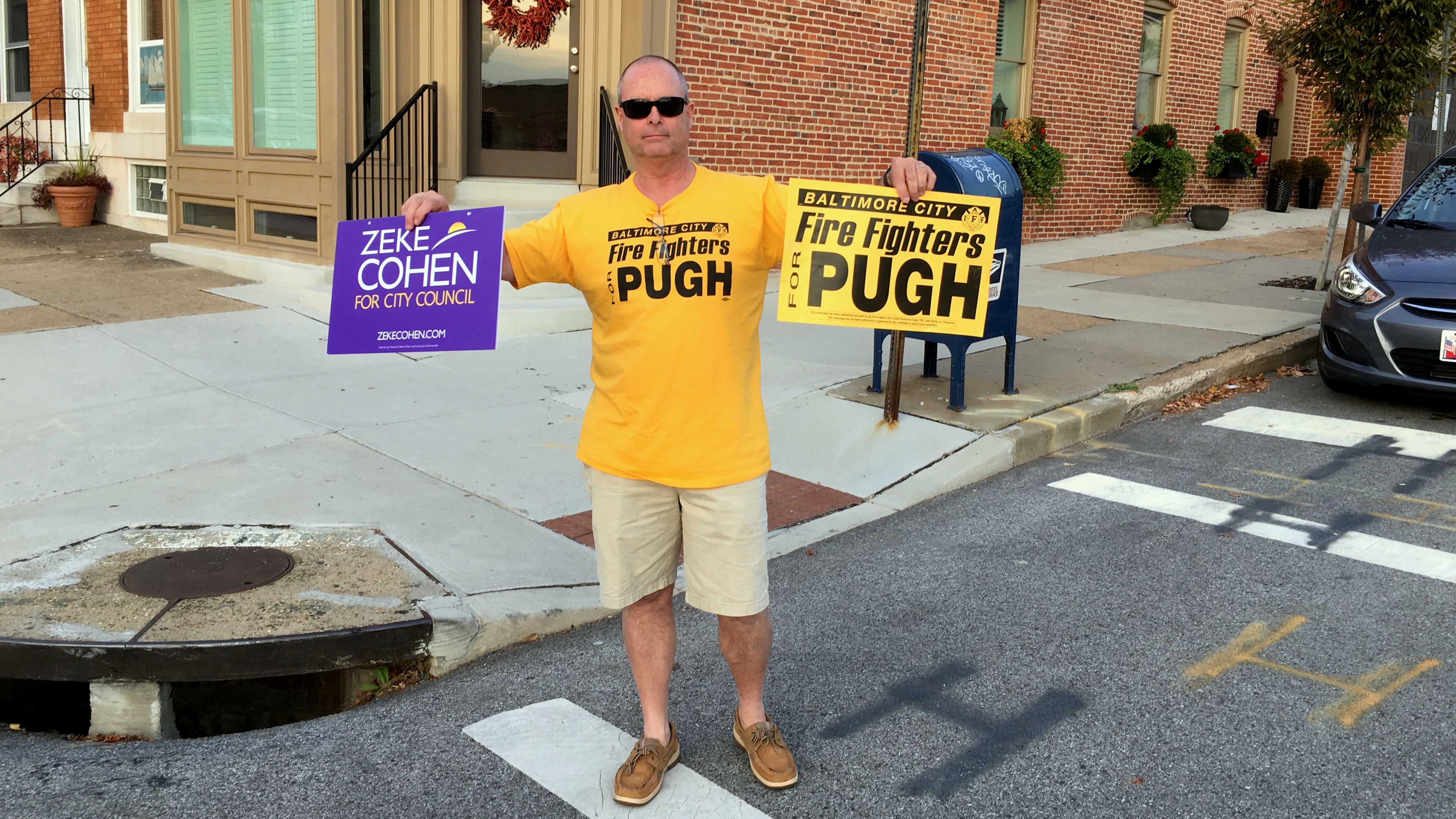 A Baltimore firefighter campaigns yesterday for Democratic candidates across from the Hatton Senior Center in Canton. (Fern Shen)

Along with Cohen and Dorsey, newcomers to the Council as a result of today’s election were Isaac “Yitzy” Schleifer (5th District), Leon F. Pinkett, III (7th District), Kristerfer Burnett (8th District) and John T. Bullock (9th District), all of whom had won the Democratic primary.

Tonight the new and old Council members joined Mayor Pugh, President Young and Comptroller Pratt on the stage of the Radisson ballroom. The group billed itself during the election as the Unity Slate.

Mayor Pugh and the new Council will begin their terms on December 8.