In the letter she hand-delivered to President-Elect Donald Trump at the Army-Navy game on Saturday, Mayor Catherine Pugh praises Trump for his insight into the value of infrastructure improvements and offers Baltimore “as the perfect place to target” such investment.

“You have so rightly spoken at length on the need for both urban renewal and sizable infrastructure investment,” the letter begins.

The mayor then urges Trump “to use the power of your office to support robust investment” in four projects, two of which the U.S. Department of Transportation (DOT) rejected earlier this year.

These were a $76 million request for a FASTLANE grant for new highway ramps off of Interstate-95 to serve Kevin Plank’s Port Covington development and $155 million to help enlarge CSX’s Howard Street tunnel.

When the Port Covington proposal was turned down last July, a spokesman for Republican Gov. Larry Hogan blamed the Democratic Obama administration for “overlooking Baltimore.”

The application was made by Sagamore Development, the real estate arm of Under Armour CEO Kevin Plank, as part of a package of city, state and federal subsidies sought for his proposed $7 billion “new city” at Port Covington.

In August, the City Council and then-Mayor Stephanie Rawlings-Blake approved $660 million in tax increment (TIF) bond funds for the project.

In her letter to Trump, Pugh says that Port Covington will not realize its full potential without the roadway improvements, which state officials vowed to re-submit to DOT in the next round of competitive FASTLANE applications.

Regarding the Howard Street Tunnel, the mayor argues that raising the height of the tunnel to allow double-stack container trains to serve the Port of Baltimore will create 500 construction jobs and up to 3,000 permanent jobs.

Nor does it touch on such controversial issues as community policing that many think will require federal funds and direction to implement properly. There is no mention of the consent decree under negotiation following the U.S. Department of Justice finding of racial bias and excessive force by the Baltimore Police Department.

The Trump administration should also help Baltimore with broadband infrastructure, the mayor writes.

“The city is eager,” Pugh writes, “to apply for additional federal grant opportunities similar to the $2 million received from the Broadband Technology Opportunities Program (BTOP), led by the Department of Commerce’s National Telecommunications and Information Administration (NTIA) to help Baltimore realize its goal of having the most robust broadband infrastructure possible.”

“I look forward to working with you and your Administration on these important matters,” the two-page letter concludes.

Below is the text of the letter, released tonight by the mayor’s office at the request of The Brew: 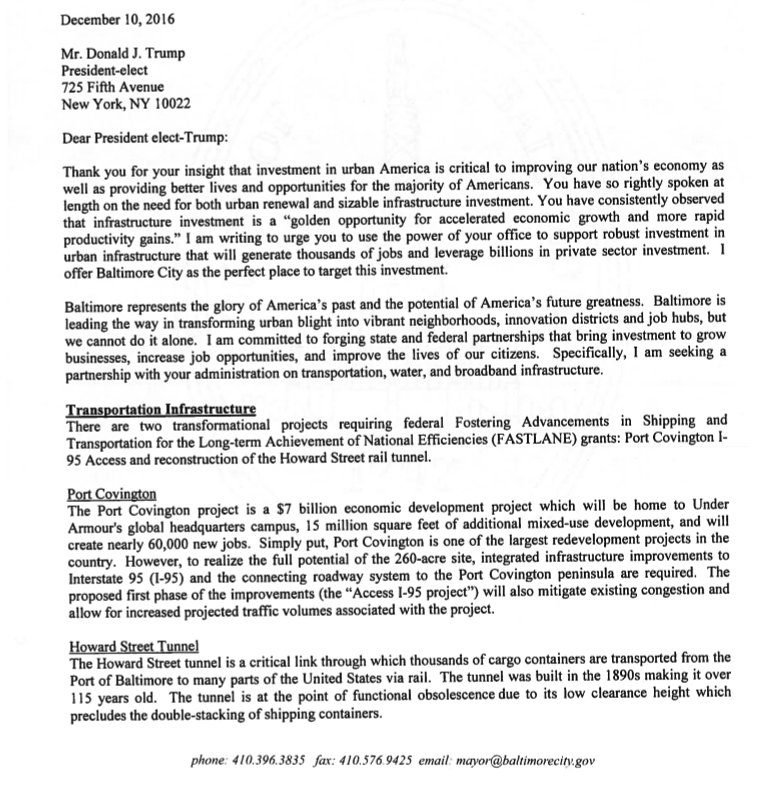 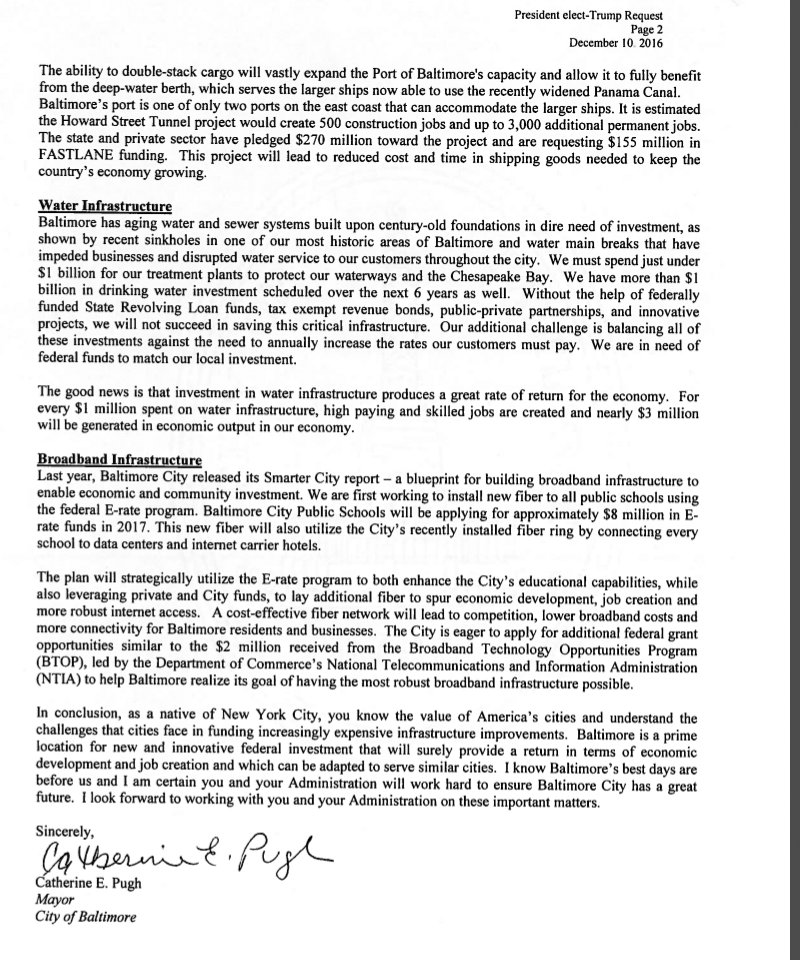