Representatives from Wheelabrator Technologies Inc., the New Hampshire-based company that owns and operates Baltimore’s trash-burning incinerator, were on the hot seat.

So, to a lesser degree, was the Maryland Department of the Environment (MDE).

Overdue to comply with federal requirements to update Maryland’s pollution control standards for nitrogen oxide (NOx), which is known to increase ozone and worsen respiratory conditions such as asthma, regulators had summoned the state’s two big trash-burning plants to their Baltimore headquarters.

But environmental and community activists at the Tuesday stakeholders meeting were clearly unimpressed with the NOx reductions offered by the Baltimore Refuse Energy Systems Co., known as BRESCO.

Timothy Porter, Wheelabrator’s director of air quality programs, said the company could optimize existing technology at the South Baltimore facility and keep within a NOx limit of about 170 ppm (parts per million), down from 180 ppm.

This would reduce BRESCO’s annual 1,123 tons of NOx output by about 60 tons, according to MDE’s calculations.

“You’re talking about just squeaking it down a tiny bit, without any new systems,” said Michael Ewall, of the Energy Justice Network. “Just running the system you already have like you should have been doing already.”

“It sounds like more of a band-aid for Wheelabrator,” added another Energy Justice Network member, Dante Swinton, who noted that the 5% annual reduction would still leave untouched the 64-megawatt plant’s distinction as Baltimore’s biggest ozone polluter.

What followed was an at-times highly technical back-and-forth over what the plant operators could do – and should be required to do – by MDE.

Making the argument that Wheelabrator could do more was attorney Leah Kelly, of the Environmental Integrity Project, who represented Clean Water Action, the Maryland Environmental Health Network, Chesapeake Physicians for Social Responsibility, United Workers, Free Your Voice and the Maryland Sierra Club.

Kelly noted that the Montgomery County Resource Recovery Facility, the other large municipal incinerator subject to the state requirements, installed “low-NOx” technology in 2008 that cut its emissions by nearly half within two years.

At Tuesday’s meeting, MDE officials never called on the representative from Covanta, the company that operates Montgomery County’s 52-megawatt plant, where the NOx emissions averaged a relatively scant 89 ppm in 2015. 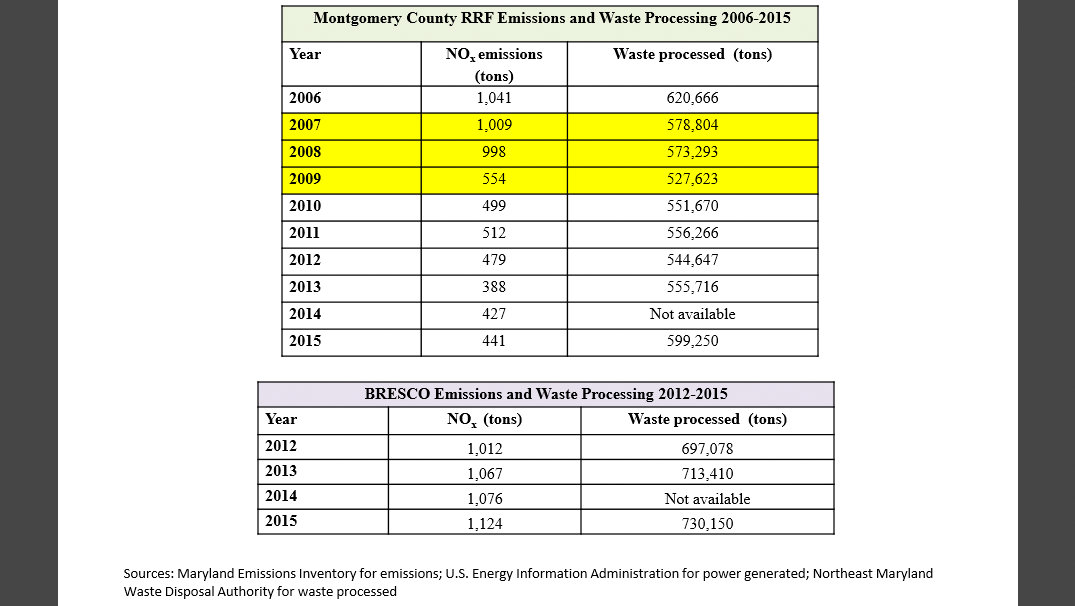 Kelly also pointed out that other states, such as Massachusetts, Connecticut and New Jersey, have significantly more stringent NOx emission limits than Maryland.

“Ours needs to be at least as strict as these other states if we want to ensure we’re protecting the health of all Marylanders,” Kelly said, citing Connecticut’s 150 ppm limit. 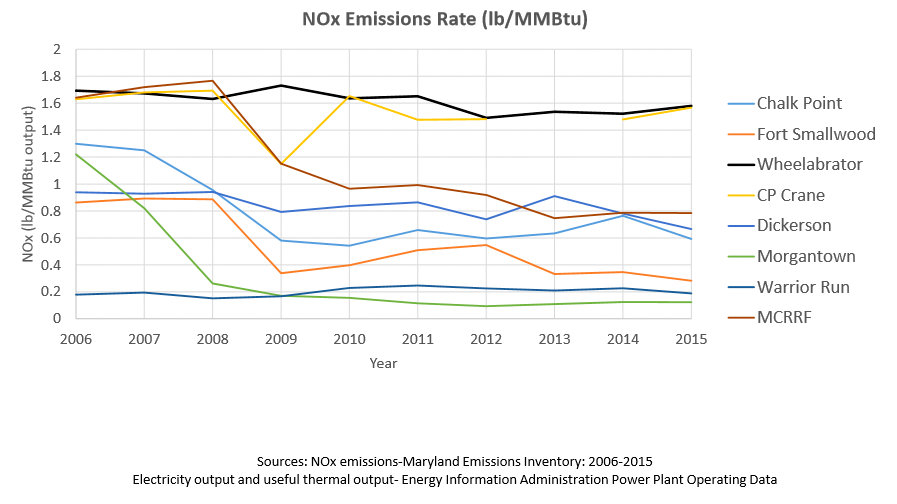 Kelly’s comparison included a slide showing NOx emissions from the state’s largest power plants relative to those plants’ useful output (electricity and steam generated). The comparison showed every other electrical generating facility in Maryland becoming steadily more efficient and producing less NOx per useful output, except Wheelabrator and the C.P.Crane Plant in Middle River, which plans to stop burning coal in June 2018.

“We’re doing what we can with we have,” he said, launching into a detailed explanation of the design limitations of the facility – a smaller footprint, a smaller furnace volume and other incompatibilities that would cause operational problems.

“You’d always be down,” he said. “It’s unfeasible. You just can’t do it unless you rebuild the boiler from the bottom up.” 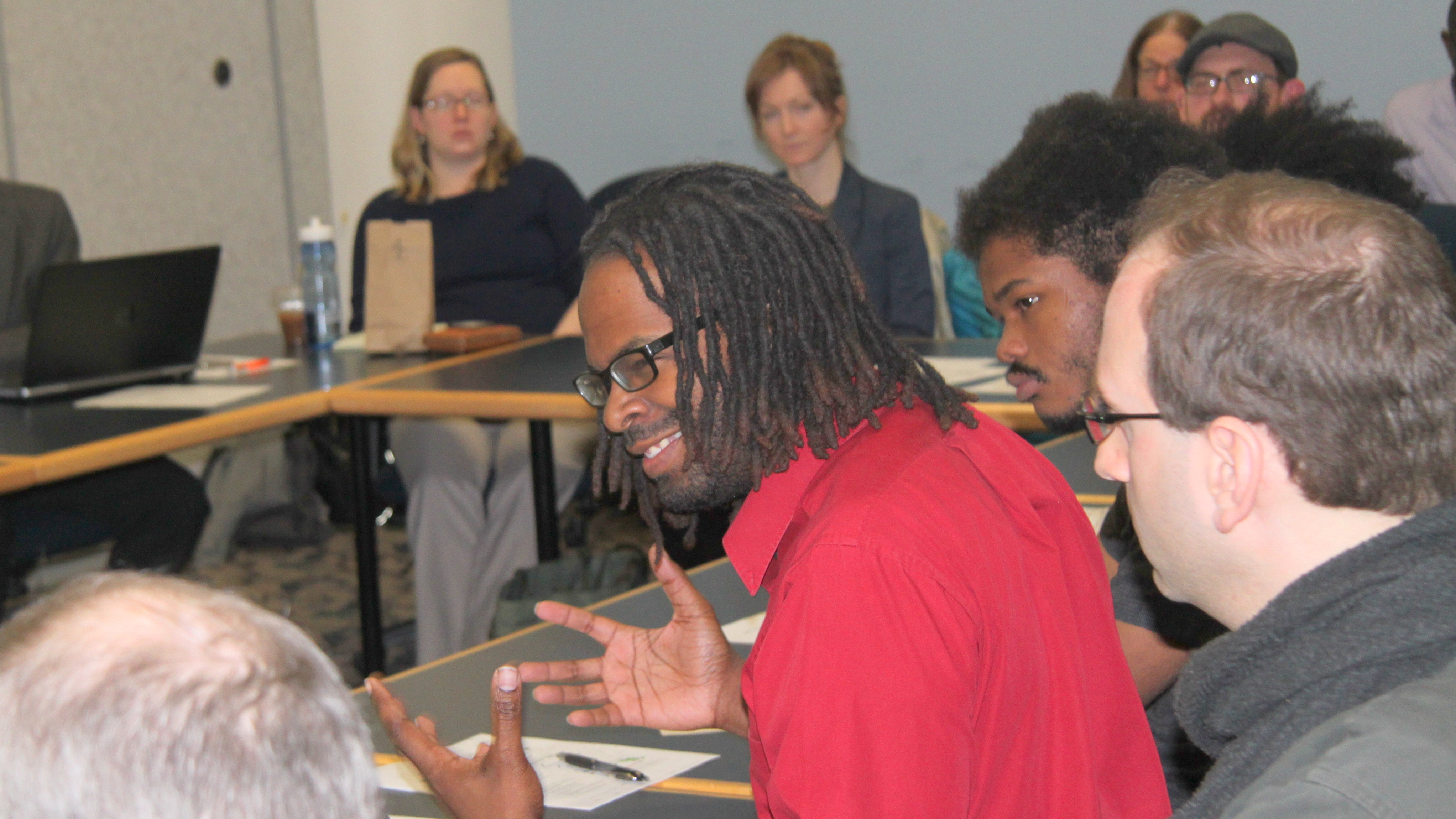 Ewall pressed, noting that Wheelabrator has plants in several states with stricter limits.

“This plant is so distinctive that, while all your other plants in other states can meet 150 [ppm], this one can’t?” he said.

“At what point do you put this plant on a schedule to have a complete overhaul?” asked Rebecca Ruggles, director of the Maryland Environmental Health Network. “Isn’t there a useable lifespan?”

Porter responded by noting, “We have made improvements. You used to see levels of 240 or 350 and you rarely see that now.”

He noted that Porter had mentioned “a figure of $11 million” to install state-of-the-art Selective Catalytic Reduction (SCR) technology that significantly reduces NOx.

“So the issue with being too aggressive with the overhaul or an overhaul in stages is it would hurt WTI’s bottom line,” Alston said.

The federal government defines RACT as the lowest emissions limitation that is “reasonably available considering technological and economic feasibility. ”

More than two dozen people were crowded into the room, with concerns about the BRESCO plant that went beyond NOx.

“We have spent a lot of time looking at this plant – the mercury impacts are not small,” said Jon A. Mueller, vice president for litigation, at the Chesapeake Bay Foundation.

“We deserve better than BRESCO,” said Destiny Watford, of Free Your Voice and United Workers. “We have to stop burning and burying trash.”

Greg Sawtell, of United Workers, said it is difficult for the public to evaluate the company’s technical claims and cost projection and asked if some independent assessment could be made to provide reliable data.

“MDE will clearly be doing its own evaluation,” Aburn said.