A new Harford Road Bridge over Herring Run, promised to northeast Baltimore communities for two decades, has been delayed again as design work more than doubles in cost.

The city Department of Transportation is seeking a fresh EWO (extra work order) of $438,000 to pay Whitman, Requardt & Associates to undertake additional design modifications of the replacement bridge.

Mayor Catherine Pugh and the Board of Estimates is set to act on the overrun tomorrow.

The expenditure is on the board’s routine agenda, which is typically approved by voice vote with no public discussion.

Fixing the Harford Road Bridge, constructed in 1911, has been a top priority of local communities since the 1990s, when the concrete structure began to show serious signs of deterioration.

The structure is now too far gone to undergo repair.

It has the poor Bridge Sufficiency Rating (BSR) of 39.6, a result of failing spandrel walls, arch-barrel deterioration and inadequate fill drainage.

The bridge is used by over 22,000 vehicles daily, according to DOT. 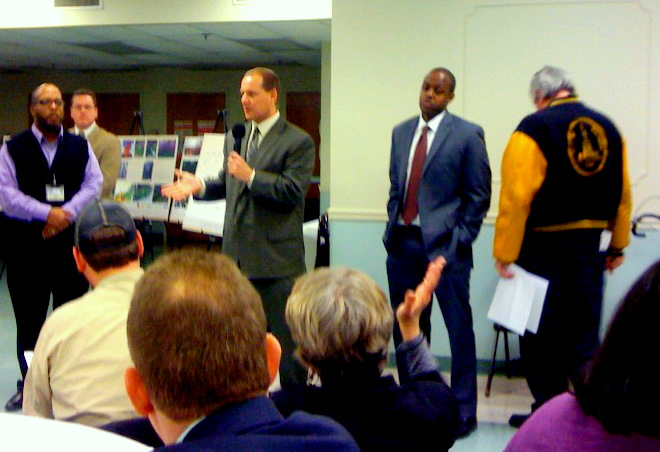 Sixteen years ago, then-Mayor Martin O’Malley promised to replace the bridge, which is eligible for federal funds as a carrier of a state road.

Construction of a replacement bridge was supposed to start in July 2010, but was delayed in part because of concerns by the State Highway Administration about the concrete arch facade and abutments proposed by Whitman, Requardt.

At a February 2014 public meeting, DOT promised northeast residents that construction of the new Harford Road Bridge was to begin in fall 2014.

Last year, following a Brew article on the letting of a fast-track design-build contract for the Central Avenue Bridge, DOT officials and Northeast’s then-Councilman Robert Curran promised that the Harford Road Bridge contract would be awarded by fall 2016.

No Word on Construction Start

Tomorrow’s EWO gives Whitman, Requardt an unspecified period to complete design work, including fixing the arch and abutment concerns expressed by the SHA in May 2010.

The consultant will provide a design for a new pedestrian passageway through the fill structure and address the design of two bike lanes on the new bridge.

Whitman, Requardt will also help DOT supervise the drafting and award of the bridge contract.

DOT has not responded to our questions about when construction of the new bridge could start.

Similar DOT projects have taken a year – and often longer – to move from final design to the start of construction.

The replacement bridge will require between 18 and 24 months to build, DOT has said in a prior release.

During this period, the current bridge will be closed and torn down.

Federal highway dollars will pay for 80% of the project, with the remaining 20% coming from the city.