Some came in headscarves. Others in yarmulkes. There were people of all ages and races, some of them flinty protest veterans, others first-timers, a bit taken aback to hear the occasional profane chant.

But there was a common purpose for the more than 2,000 people who filled the entire international arrivals area at BWI Thurgood Marshall Airport last night – to repudiate the ban on refugees and people from seven Muslim countries imposed via executive order by Donald Trump on Friday.

“No hate! No fear! Immigrants are welcome here!” they chanted, waving signs that said “Ban Trump and fascists, NOT immigrants!” and “This is not who we are.”

For many, though, the White House action didn’t so much stoke theoretical fears of a dark turn the country might soon take. It was just a high-level endorsement of the ugly behavior toward non-white, “foreign” looking people they have already personally witnessed lately.

“I was at the Costco in Columbia and this woman was sobbing, just crying and crying. I asked her, ‘Are you alright?’” said Wendy Williams-Abrams of Ellicott City. “She said this man had yelled at her to ‘Go back to where you came from!’” 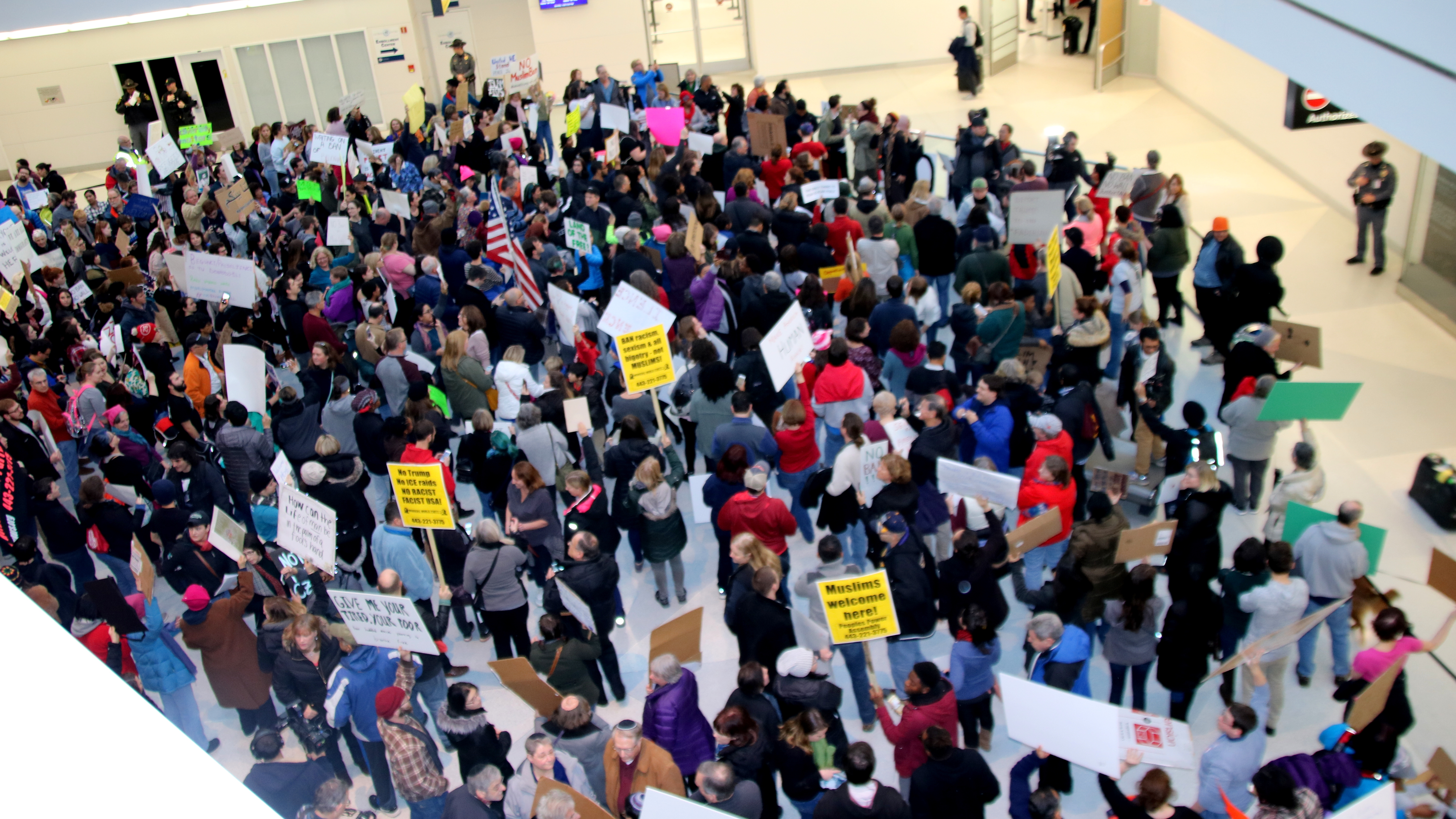 The crowd at BWI filled the international arrival area, on both levels, to protest the White House’s anti-Muslim travel ban. (Fern Shen)

When Willliams-Abrams joined the woman’s mother, who was complaining to the store manager, the man at first denied saying it.

But eventually, she said, getting angrier and angrier (“I thought he was going to hit me”), he said it again: “Go back to where you came from!”

“I’d never seen prejudice so up-front and blatant. It was so upsetting,” she said, standing with her children and her friends, the Phamdo family, of Mt. Airy.

“It’s like these attitudes were always there and now people have somehow been given permission to express them and they’re coming out,” said Aubrey Phamdo, 39, a substitute teacher.

Her husband Hotan Phamdo, 40, an accountant, kept his arms around their two kids as they stood in the crowd.

Why did they come, on a chilly school night?

“We wanted to show our kids democracy and kindness,” Aubrey Phamdo said. “I hope public demonstrations like this, people showing up, speaking up, makes a difference.” 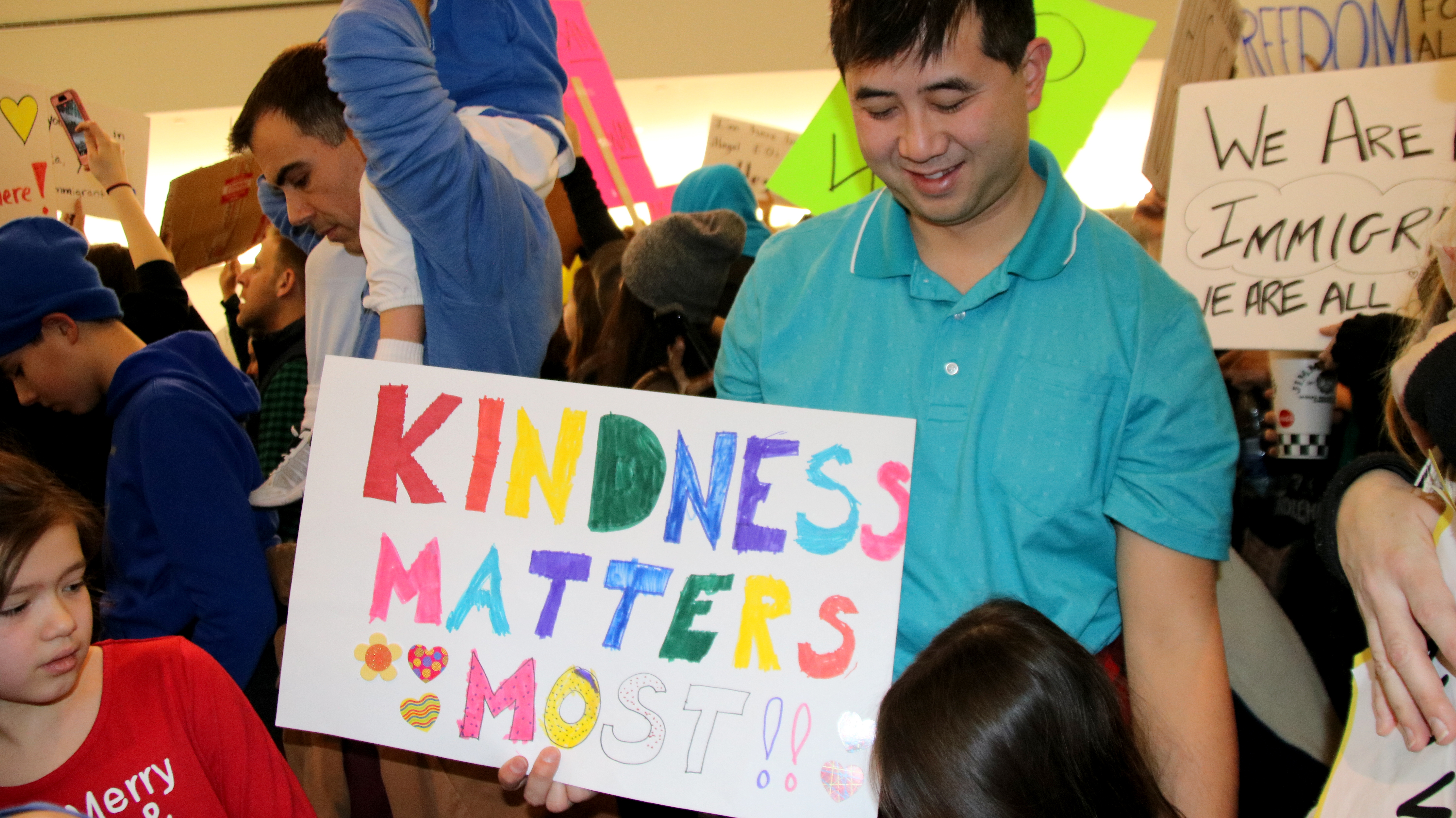 Hotan Phamdo, of Mt. Airy, stands with his daughter at BWI to protest the ban on refugees and people from seven Muslim countries. (Fern Shen)

Trump promised it during the campaign, but still the immigration ban imposed Friday night set off a furor around the world and across the country – large protests were staged at Dulles and San Fransisco Airports, among others.

Scrambling over the weekend to enforce a drastic policy change many experts said was rushed, vague and poorly worded, immigration officials refused entry to refugees and, from the seven countries, students, visitors and even green-card-holding legal permanent U.S. residents. 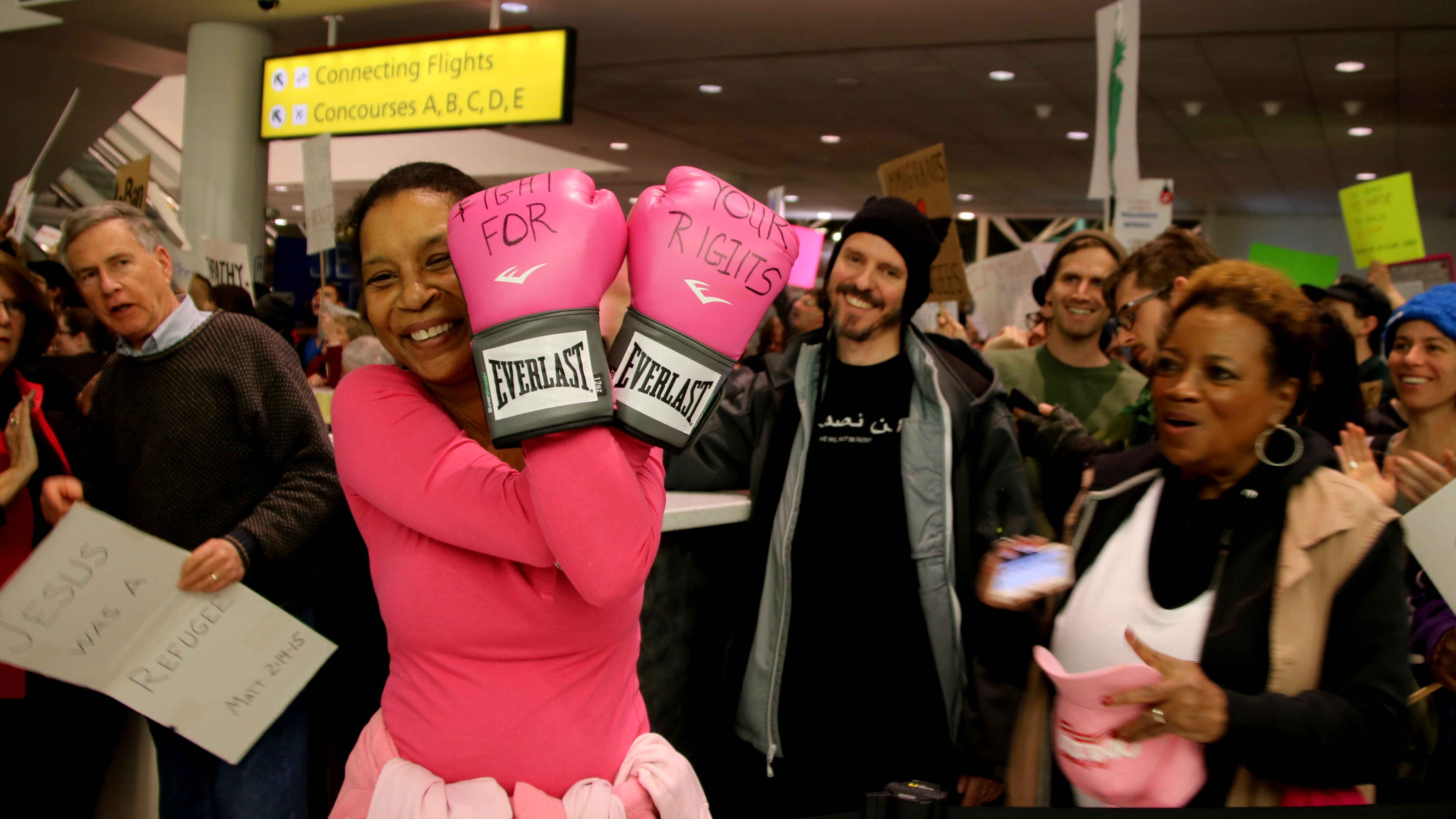 This woman came to the BWI protest ready to engage. (Fern Shen)

Lawyers mobilized against Trump’s order, persuading a federal judge in Brooklyn to block a portion of it, saying that refugees and others being held at U.S. airports should not be sent back to their home countries.

The judge stopped short of letting them into the country or issuing a broader ruling on the executive order’s constitutionality.

“It’s not a Muslim ban, but we were totally prepared,” he told reporters Saturday in the Oval Office.

Earlier in the day, he defended the ban on Twitter:

Yesterday White House chief of staff Reince Priebus walked a portion of the order back, saying that people from affected countries who hold green cards will not be prevented from returning to the U.S.

Politicians Turn Out, Too

As BWI travelers arrived last night to find cheering throngs welcoming them with chants and homemade signs – some scrawled on the back of cereal packages and U-Haul boxes – Democratic politicians turned up as well.

“Sadly, we have a president who has come to a point where there seems to be almost a hijacking of our democracy,” Cummings said. 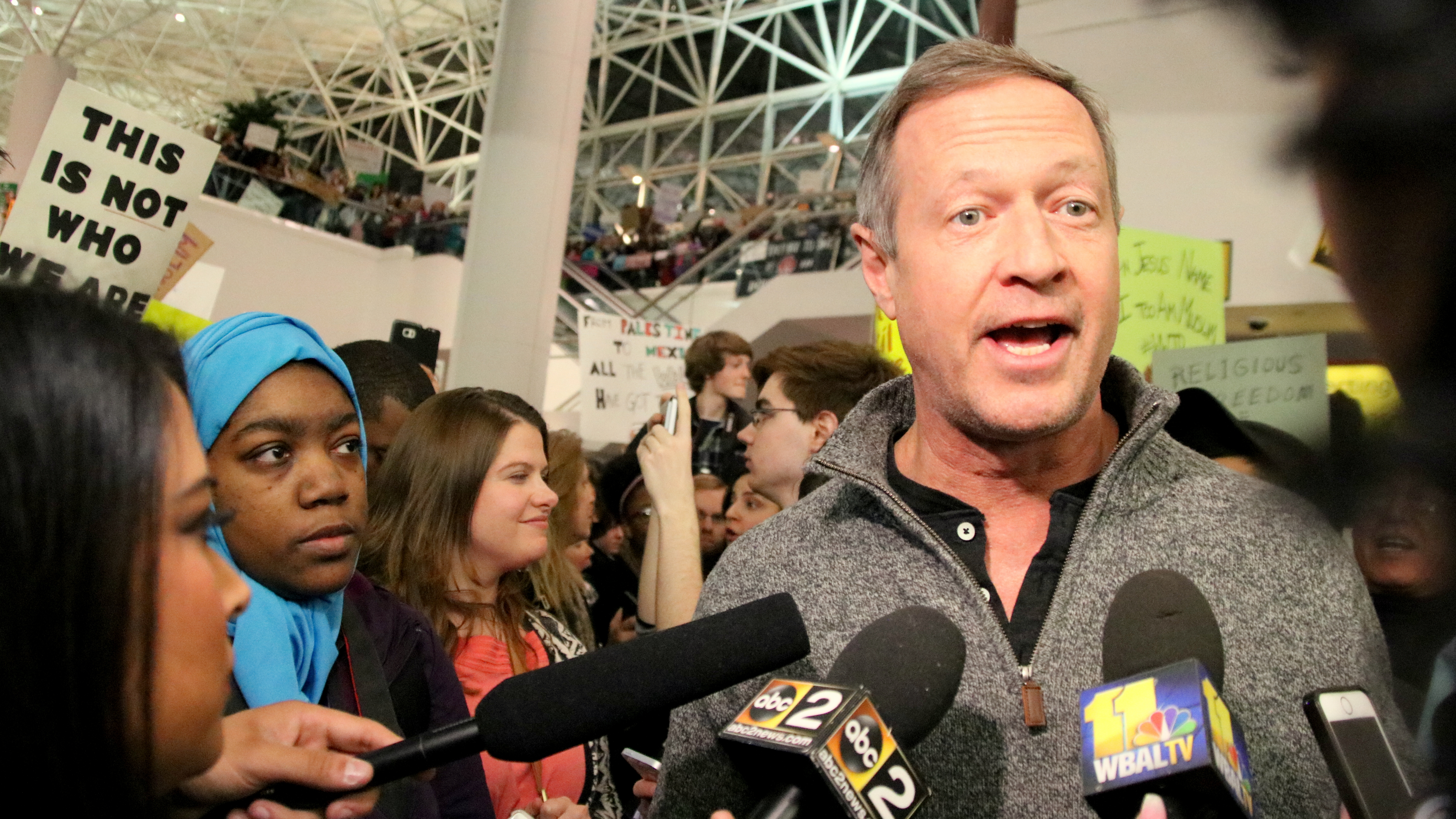 When former Baltimore Mayor and Maryland Governor Martin O’Malley showed up, television cameras surrounded him. But from the crowd, the failed presidential candidate drew a mixed reaction.

Despite the presence of a megaphone, which briefly went missing, sending Ruppersburger into a panic, few in the huge crowd could hear the politicians’ remarks.

It was the chants (“This is what democracy looks like!”) that were audible as a roar that reached even into other parts of the airport.

Participants were eager to talk about what prompted them to join the demonstration, some speaking as they sat in wheelchairs, some describing a drive of more than an hour to get there.

“Because it’s important to me personally,” said Inez Haymie Dodson, recalling that her mother immigrated to the U.S. from the British West Indies in 1917, her father in 1921.

“This land is for all people, not a select few,” said the 78-year-old, who came with a group from St. Bartholomew’s Episcopal Church in the Ten Hills neighborhood of Baltimore.

“I’m a person of color and I still feel in a daze about this. It’s unbelievable,” said Lilli Banks, 18, of Howard County, who held a “ISLAM ≠ ISIS” sign.

“I have friends who are Muslim and they hear about people having their hijabs torn off their heads and now this? They’re terrified,” Banks said. “I’m here for them.”

A Muslim woman from Catonsville holding up the “No hate, No fear” sign said her children have been exposed at Baltimore County schools to hate speech directed towards them as Muslims and towards Mexican classmates.

“It began last year, when Donald Trump was running for president,” she said, with a sigh. “It was very painful.”

Born and raised in Florida, she converted to Islam 15 years ago, in high school, she said. Since 9-11, she said, misconceptions and hostility directed towards Muslims and other groups has increased and lately reached a fever pitch. 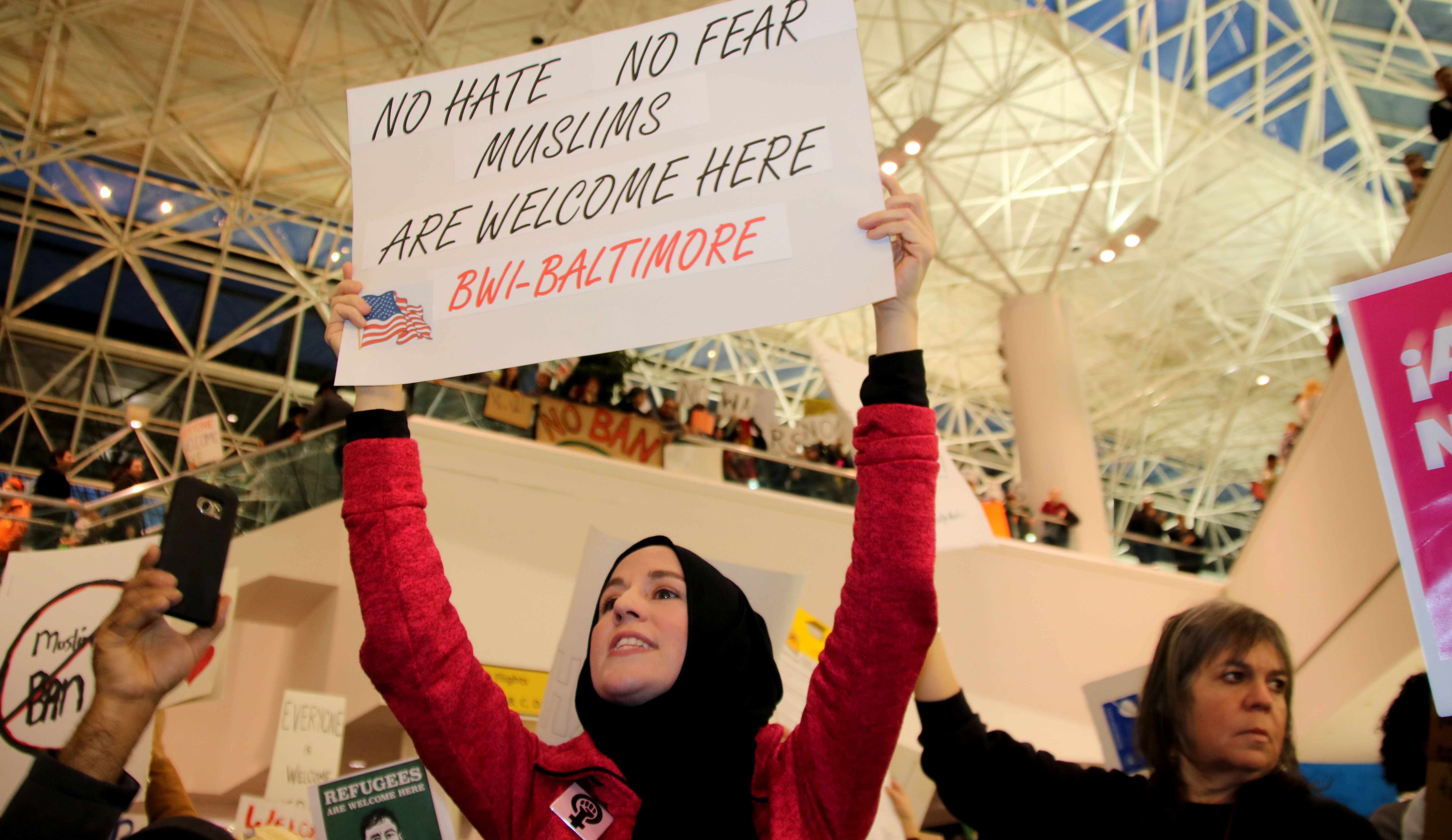 “My children have been exposed to hate speech,” this woman at the BWI rally said. (Fern Shen)