Across three police commissioners, three state’s attorneys and two mayors, the motto preached by Baltimore’s leadership has been loud and clear: “Get the bad guys with guns off our streets.”

Now we find through a federal – not city – investigation that at least seven of those bad guys were allegedly veteran Baltimore police officers.

The officers charged yesterday with committing robberies, extorting money, stealing guns and dealing drugs did so as members of the department’s elite Gun Trace Task Force – formed (you got it) to get guns off the streets.

The indictment traces in detail the reported activities of these seven Task Force cops in 2015 and last year, while alleging in court papers that the officers had also plundered and pillaged, filed false reports and abused overtime.

According to the indictment:

• One officer robbed citizens (often suspected drug dealers) by day and moonlighted by selling heroin under the nickname “GMoney.”

• Another posed as a federal agent and pilfered $20,000 in cash from a drug dealer. The same officer asked an informant to identify somebody “big” for the Gun Trace Task Force to rob, promising to bury “10 kilos” of drugs in his backyard as a reward.

• Another detective bragged last summer, “Imma be making $13,000 this month.” He subsequently filed 8 hours of overtime to account for the time he spent playing poker at the Maryland Live casino.

• Task Force detectives swooped down on a maintenance supervisor getting out of his car and forced him to hand over $1,500 in cash. The victim had intended to use the cash to buy a money order to pay his rent.

• One detective snatched $4,800 found in a sock concealed in the storage locker of a man under surveillance. The detective pocketed $2,000, but returned the rest, telling the man he had been “taxed” a “little bit.”

To cover up their alleged crimes, the indictment says, the officers swore out false affidavits, submitted phony incident reports, prepared bogus reports of property seized from arrestees and coached one another about what to say if questioned by investigators from the internal affairs division of the BPD.

In one brazen heist, four of the officers arrested a suspected drug dealer, seized his house keys and, while the suspect languished in jail, entered his house and cleaned out a safe containing $200,000 in cash, plus a $4,000 Breitling wristwatch.

What’s remarkable about these reported activities is that they took place so recently – the safe robbery happened “on or about March 22, 2016,” according to the indictment.

In other words, the deeds were committed right under the nose of the reported close scrutiny of city police by Baltimore State’s Attorney Marilyn Mosby and the department’s own brass. (Mosby admitted yesterday that her office will have to reevaluate – and likely will have to throw out – gun felony cases brought to city lawyers by the now-tainted Gun Trace Task Force.) 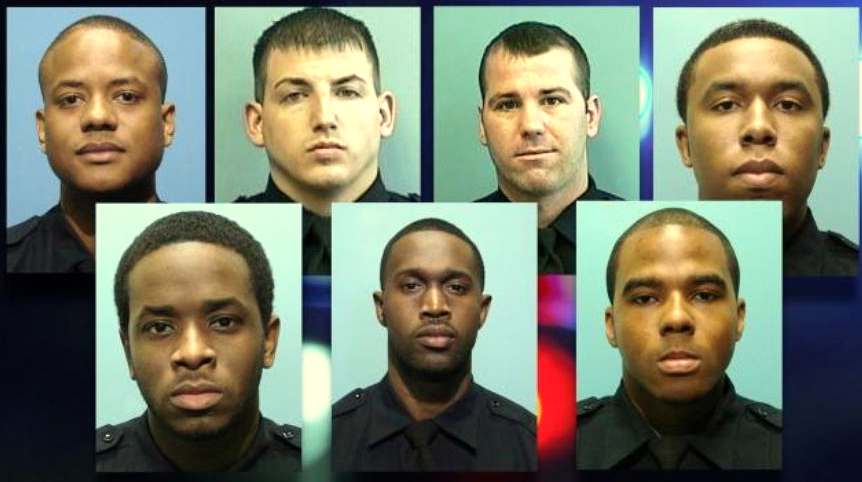 What They Had in Common

What emerges from the 45-page indictment is a picture of officers committed to abusing police powers and indifferent to the citizens they are sworn to protect:

• Collectively they have 80 years of service in the BPD, with the youngest member joining the force in May 2009. So if they were “rogue” police officers, they sure got away with it for a long time.

• None live in the city. Six currently reside in Baltimore County, one in Harford County and one in Anne Arundel County.

• They pocketed $381,114 in overtime in the last fiscal year, which boosted their individual annual pay to the six figures. Sergeant Wayne E. Jenkins, for example, made $83,345 in overtime in fiscal 2016, which nearly doubled his annual police salary of $85,406.

• All seven officers abused the department’s loose process of filling out overtime reports. One of them, according to the indictment, collected 40 hours of overtime last summer while vacationing with his family in Myrtle Beach, S.C.

Two of the officers arrested yesterday had a history of questionable arrests and use of firearms.

Detective Jemell L. Rayam has been involved in three shootings, one fatal. In the latter case, the family of the dead man, Shawn Cannady, won a $100,000 out-of-court settlement with Baltimore City.

Detective Daniel T. Hersl was the subject of multiple lawsuits. In 2007, he and his partner, Calvin P. Moss, arrested a school cafeteria worker for allegedly selling drugs on Harford Road. The woman was actually selling church raffle tickets. The charges were dropped, and she was paid $100,000 by the city to drop her lawsuit.

In September 2014, the city settled another lawsuit filed against Hersl for $49,000. In this case, the detective was accused of beating up a handcuffed man on East North Avenue.

In addition to Hersl, Rayam and Jenkins, the other officers charged with racketeering and fraud were Momodu Gondo, Evodio C. Hendrix, Marcus R. Taylor and Maurice K. Ward.

In a separate indictment unsealed yesterday, Detective Gondo was charged with participating in a drug-dealing conspiracy under the nickname of “GMoney.”

According to the indictment, the 11-year BPD veteran not only trafficked in heroin, but also tried to thwart federal agents trying to catch his co-conspirators – in one case helping ringleader Antonio Shropshire remove a GPS tracking device placed on his vehicle by the Drug Enforcement Administration.

There is an interesting backstory to Gondo. In 2006, the officer was 23 years old (and just two months out of the police academy) when he was shot three times in the back while off-duty during a reported carjacking outside his home.

Gondo was then living in the 5700 block of The Alameda – one block from the Alameda Shopping Center – when he told police he was approached by a gunman.

Gondo said he struggled with the gunman before he managed to pull out his  service revolver and shoot him.

Police charged Collin Hawkins in the shooting. During the trial, the only evidence presented against Hawkins was Gondo’s identification of his alleged assailant in a photo array.

The jury acquitted Hawkins, who was later sentenced to 30 years in federal prison for another carjacking, while Gondo continued on the force, transferred to the Gun Trace Task Force around 2012.

Per standard police procedure, Gondo and the six other officers were suspended without pay pending the resolution of the federal charges and any internal disciplinary hearings. 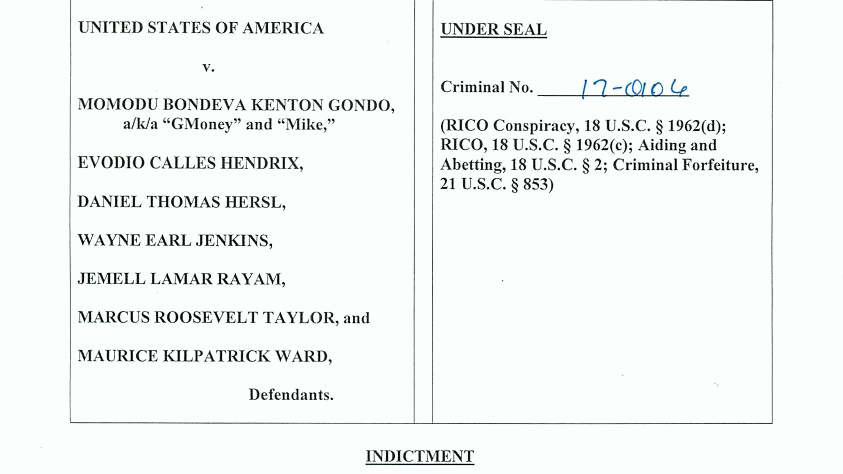 The first page of the 45-page indictment of the seven police officers. (Office of the U.S. Attorney for Maryland)