After paying $4.5 million to restore a block of Centre Street that collapsed in April, the Board of Estimates has awarded $10.1 million more to reopen two blocks of Mulberry and Cathedral streets struck by the same problem – sinkholes caused by hundred-year-old sewer tunnels that collapsed from age and neglect.

The bulk of the latest funds – $8.5 million – is headed for the city’s “go-to” sewer contractor, Spiniello Companies, with another $1.6 million allocated to the Department of Public Works (DPW) for “administration.”

Still to come: the costs of repairing sidewalks, streets and alleys damaged by Spiniello’s crews and equipment.

Renny Bass, president of the Downtown Cultural Art Center, says he has lost tens of thousands of dollars in cancelled events because Spiniello “commandeered” most of the organization’s parking lot to install emergency pumps for the sewer lines.

“We can’t make no money to pay our bills. We’re in dire jeopardy of losing our space.” He said he repeatedly tried to enlist DPW to intervene, but the agency told him it had no power over the contractor and, instead, Bass needed to file a damage claim to the city.

A DPW spokesman has not responded to Bass’ charges, which also were not heard during last week’s meeting of Mayor Catherine Pugh and the Board of Estimates. 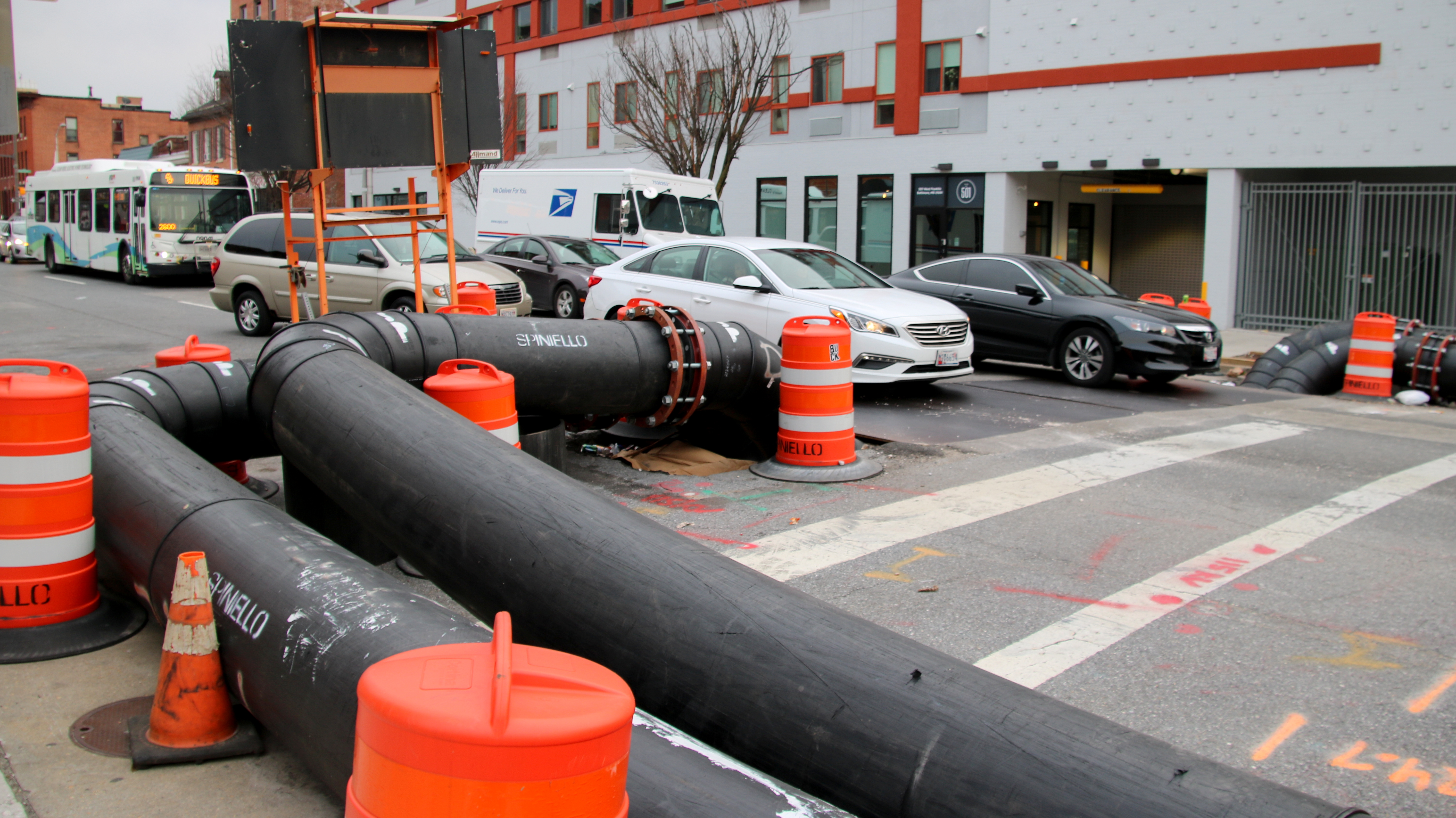 Above-ground pipes carrying raw sewage snake around Paca and Franklin streets to get around the tunnel that collapsed a block south on Mulberry Street. (Fern Shen)

Here’s a blow-by-blow account of what happened within this 20-square block area over the last year:

At 5 a.m. last April 23, a portion of Centre Street buckled and collapsed near the front entrance of the Walters Art Gallery.

The city determined that a sanitary sewer “main” – a large arched tunnel running about 20 feet below the street – had caved in, causing raw sewage to back up and eventually undermine the roadway itself. Centre Street was closed off, and the laborious task of rehabilitating the damaged tunnel with cured-in-place (CIP) lining commenced.

Unbeknownst to the city, the same sewage tunnel was experiencing a similar problem “upstream” on Mulberry Street. 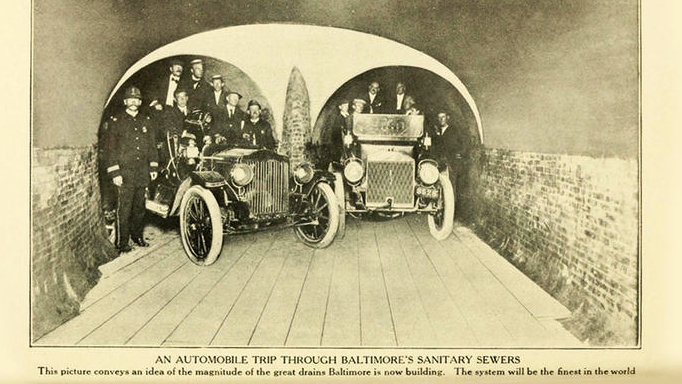 A view of the sewer tunnels that run beneath Baltimore from a 1914 booklet when they were being completed. “The system will be the finest in the world,” the caption promises. (Brew file photos)

On the evening of July 4, a sinkhole broke through the roadway in the 500 block of West Mulberry Street. A city inspector who rushed to the scene fell into the hole. He was taken to an area hospital with minor injuries.

Aside from that setback, however, the city lucked out.

Mulberry Street is one of the busiest thoroughfares in the city, a three-lane funnel of nonstop traffic on weekdays. But this was a quiet Fourth of July night.

No cars fell into the chunks of broken pavement that dropped 30 feet into the murky, sewage-saturated soil. Equally fortunate, the hole halted just short of an occupied rowhouse.

Because the brick tunnel is integral to the workings of the whole sewer network, the city called on Spiniello to build above-ground pipes to divert the flow around the sinkhole.

Large black pipes sprang up at Saratoga Street, near Martin Luther King Jr. Blvd., and ran eight blocks down Franklin Street and Park Avenue before dropping below the surface to reconnect to the Centre Street tunnel.

Additional twin pipes were laid across multiple roadways in Mt. Vernon between Tyson and Mulberry streets and Madison and St. Paul streets to keep the sewage flowing downstream. 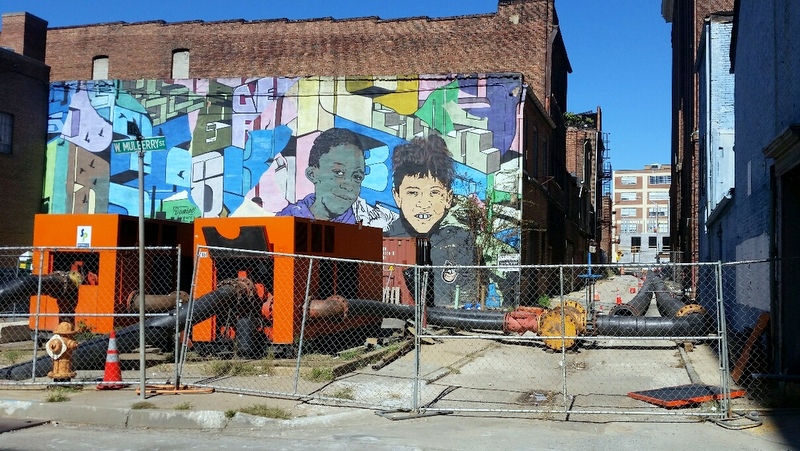 Spiniello “commandeered” this parking lot on Mulberry Street without the permission of the lot’s owner, which impacted the Downtown Cultural Art Center that used the lot to attract guests to its events. (Mark Reutter)

But even as contractors were removing the steel plates to mark the restoration of Centre Street, a new sinkhole was forming a few hundred yards to the north.

That shoe dropped on Sunday, October 16.

A portion of Cathedral Street adjacent to historic Mt. Vernon Square caved in. It was another case of a tunnel – this time a 30-inch feeder line – whose breakup had caused a subterranean “choke point.”

DPW rushed to have Spiniello handle this work. The agency requested and received approval to enter into an emergency procurement along the lines of the earlier arrangement for West Mulberry Street. 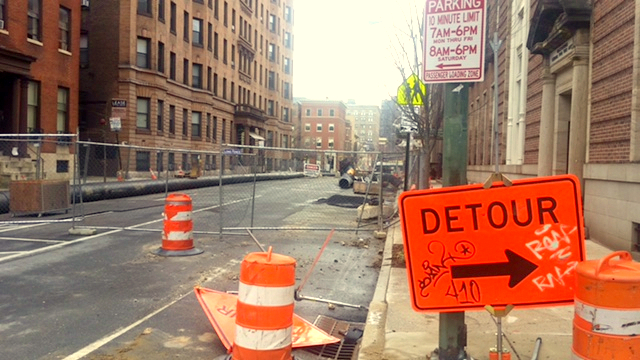 The city now says that the 700 block of Cathedral Street, closed last October, will reopen at the end of April. (Mark Reutter)

In January,  DPW announced that Mulberry Street would be reopened to traffic on February 13.

It didn’t happen. The roadway is now expected to be finished “within the next couple of weeks,” spokesman Jeffrey Raymond told The Brew.

Cathedral Street had been scheduled to reopen on March 16. That date has been pushed back to the end of April,  Raymond said.

Meanwhile, there were reports of sewage leaking from the metal-encased catch basin that Spiniello has dug at Cathedral and Monument streets.

“It’s going straight into the storm sewer and out into the harbor probably,” a resident wrote on the Mt. Vernon Neighbors Facebook group last Monday. The leak was not witnessed by The Brew, but the stench of sewage emanating from the hole was.

According to Raymond, the contractor has cleaned and rehabilitated 4,600 linear feet of the old tunnels as part of the emergency contracts. This means installing cured-in-place (CIP) lining, thereby allowing sewage to run inside the tunnels without leaking.

With repairs soon to be complete, the costly cave-ins of the last year won’t (fingers crossed) be happening again. 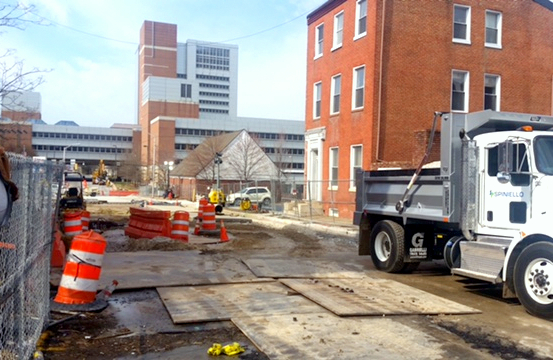 The site of the Mulberry Street sinkhole is now being resurfaced with a concrete roadway. The thoroughfare will reopen to traffic very soon, DPW says. (Mark Reutter) 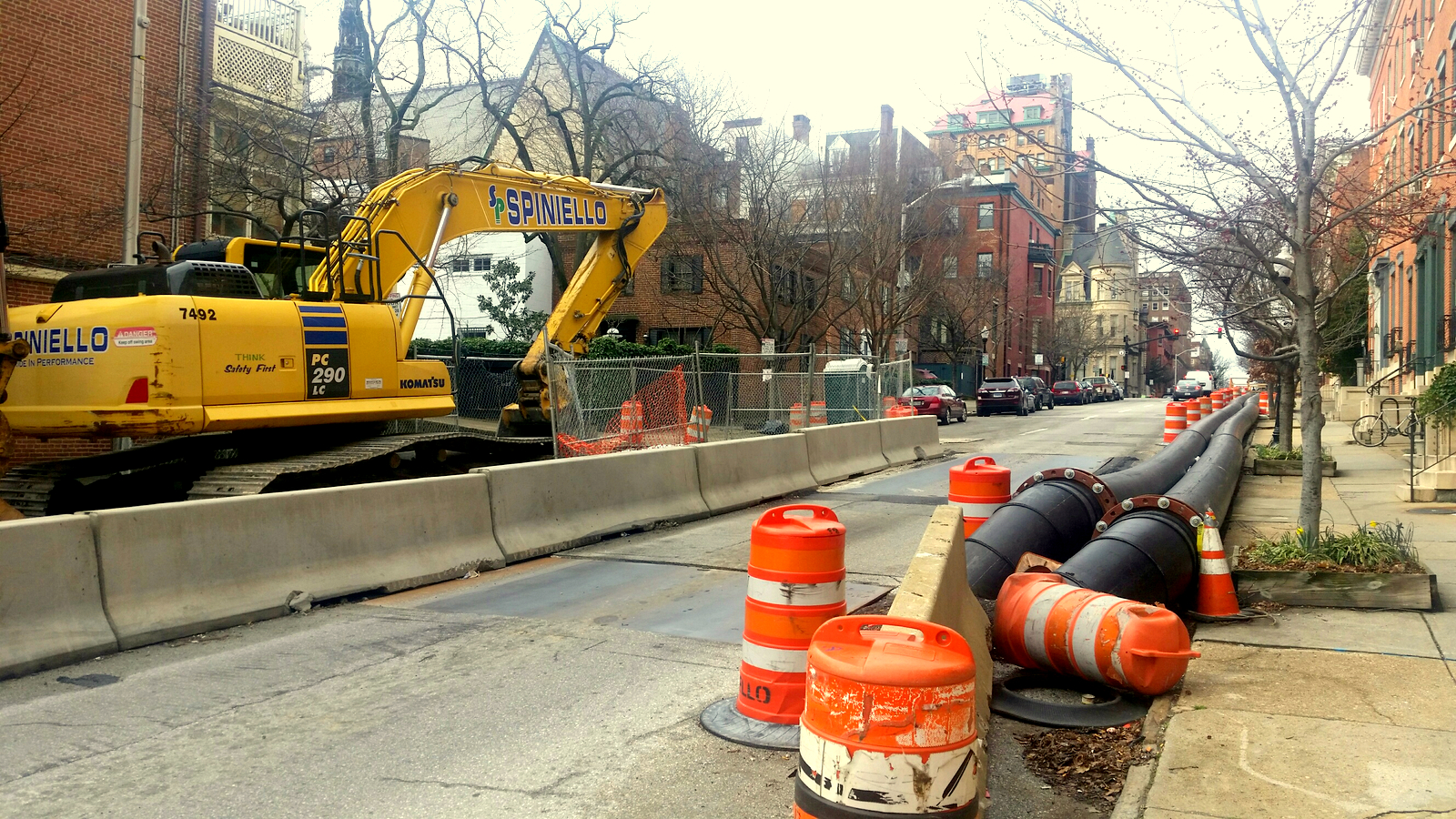 While the century-old sewage tunnel under Madison Street is relined, these surface pipes carry waste through Mt. Vernon. Eventually, this sewage travels beneath Fells Point, Highlandtown and Greektown to the Back River sewage plant in Baltimore County, where it is treated and released into the Chesapeake Bay. (Mark Reutter)