The six-year controversy over a Royal Farms convenience store and gas station proposed in Northeast Baltimore churned forward this week, as opponents argued their case on appeal in Annapolis and a demolition sign went up on the vacant building at the project site, 5901 Harford Road.

At this point, the razing of the fenced-off, badly vandalized office building appears to be welcomed by all sides.

“That property is nothing but a danger to the community and an attraction for squatters,” said Roop Vijayan, who lives nearby and is a leader of the NO RoFo Hamilton group. “It needs to come down.”

But resident expressed concern on social media about when the razing may take place and what the demolition notice implies about the battle over the proposed 12-gas-pump, 24-hour store.

The Berg Corp., which appears to own the property, is under pressure to demolish the building, said Matt Huppman, a project administrator for the Baltimore-based company.

“Somebody keeps calling the city and complaining about it,” said Huppman, whose name is listed on the notice. “The city’s particularly got a thing against vacant buildings.” 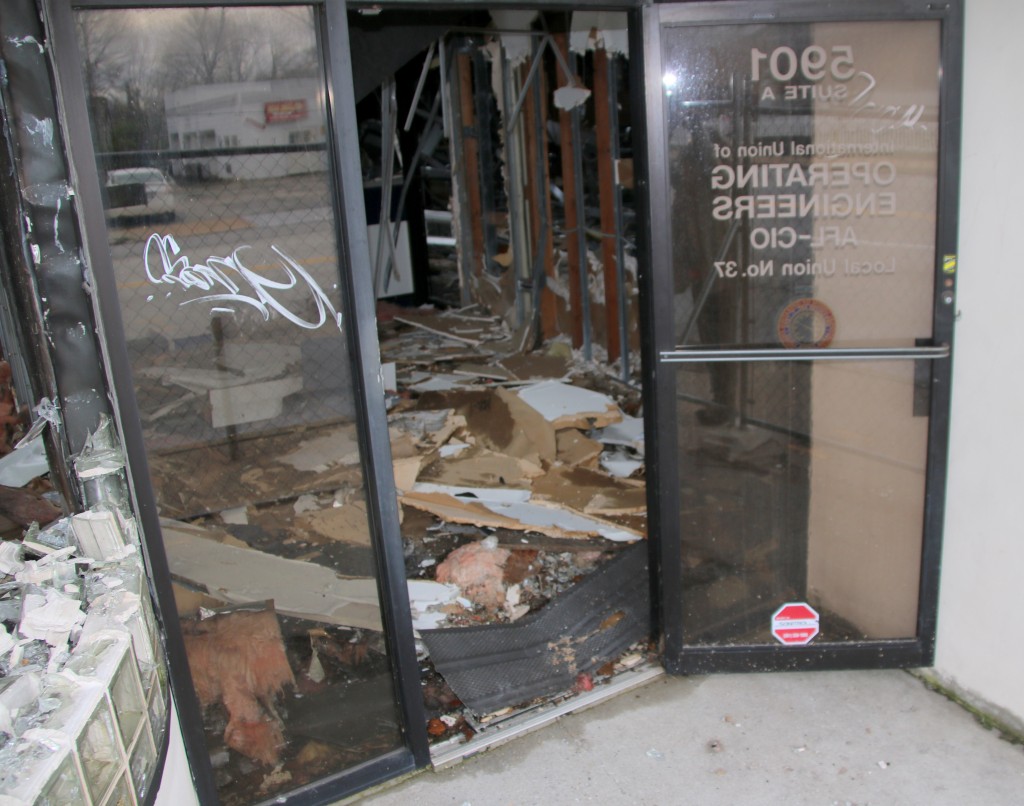 The entrance of the former headquarters of Local 37 of the International Union of Operating Engineers on Harford Road. (Fern Shen)

“Twice, somebody tried to steal the copper pipe out of it,” he said, noting that there have been fires at the property as well.

“We even had somebody staked out there to watch it, but it was odd the second we left, [the vandals] came back in,” he said.

Huppman said demolition cannot take place until the city approves the company’s request to fence off the sidewalk right-of-way.

“Those usually take 15 days to review and we just submitted it yesterday,” he said. “So it might not be until April 24 that I have that permit.”

As for when demolition might begin, he said he had no idea. “I’m just the guy who pulls the permits.”

Huppman was surprised to hear his company described as the building’s owner, but, according to Mike Hilliard, program director for the community organization HARBEL, they do own it.

Records on file with the state show that in 2015, “Harford 5901 LLC” purchased the large parcel at the intersection of Harford Road and Glenmore Avenue, the longtime headquarters of  Local 37 of the International Union of Operating Engineers. 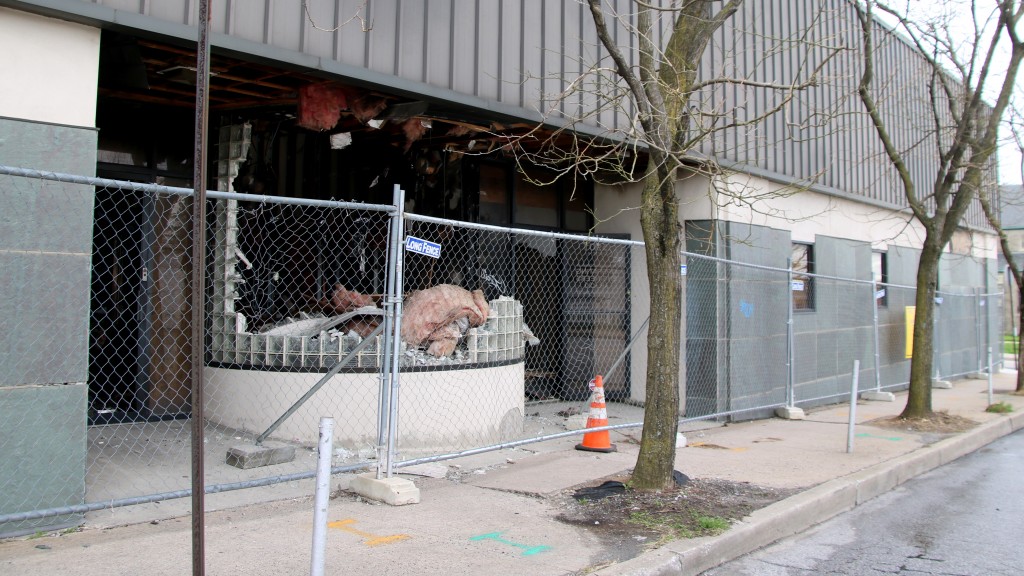 The front of the badly vandalized Harford Road building is open to the elements. (Fern Shen)

Hilliard, a longtime community leader whose organization’s office is on Harford Road right next door, explained Berg’s role and its connection to Royal Farms.

“Berg bought the property from the Operating Engineers. Then they entered into a contract with Two Farms Inc. (Royal Farms’ corporate parent) to lease the property long term to Royal Farms for their store at the location,” he wrote in an email to The Brew.

Hilliard said the lease is contingent upon Royal Farms obtaining a conditional use for the gas pumps, which the zoning designation for the parcel requires.

“I am confident they cannot start construction until the appeals court renders its verdict,” he said.

Wednesday’s appearance by the NO RoFo group before the Court of Special Appeals in Annapolis was the latest in a years-long battle by residents against the project.

They argue that that the suburban-style gas station would generate dangerous traffic at the proposed location, across the street from a library branch, near several schools and at a complicated intersection.

Royal Farms has said that its store would be a community asset and would not generate dangerous traffic and has made offers to the city to pay for intersection improvements.

The opponents’ attorney, John C. Murphy, argued on appeal this week that a May 2016 ruling by Baltimore City Circuit Court Judge Alfred Nance erred in affirming the Zoning Board’s approval of the project. 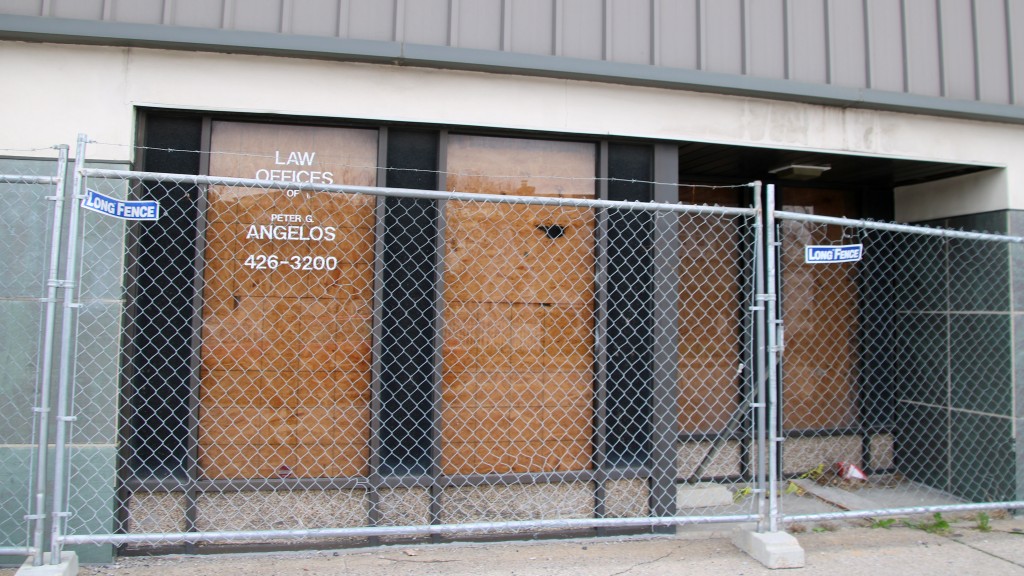 Where attorney Peter Angelos once had an office at 5901 Harford Road, now boarded-up. (Fern Shen)

The board had granted the conditional use because it found no additional problems created by the gas pump use beyond those to be created by a convenience store, which is permitted in that location.

Murphy said that ruling misreads a 1991 decision, Schultz v. Pritts. He also said the board erred in failing to post a notice of its October hearing on the building.

Two Farms’ lawyers argued that the Schultz decision did not apply and that the Zoning Board had not found any additional adverse effect from the gas pumps.

They said it would be arbitrary and illegal to deny Royal Farms the right to put a gas station in that location.

Among the small group of residents who went to Annapolis to support the NO RoFo cause Wednesday was Councilman Ryan Dorsey.

Dorsey said he was struck by the fact that the case, which dates back to long before he was elected to represent the 3rd District, is filed as the community “versus the Mayor and City Council and Two Farms.”

Dorsey said the Zoning Board has “demonstrated a lack of concern for the community’s perspective” and is “in no way representative of the City Council.”

“I want in no way to be associated with Royal Farms or any business, developer, or other organization that wants only to extract profit and further their own interests and shows not a modicum of concern for the interests of communities where they decide they’re going to impose their interests,” Dorsey said in a statement to The Brew.

“We wouldn’t have this problem in the first place if the city made a decision to put people in place to preserve the interests of the people of the city, not just business interests and selectively applied laws,” he said.

“I showed up in Annapolis for the appeal to make the point that I’m with the people, in absolute opposition to what the city stands for in this case.”