With last week’s explosion of a Veolia North America-managed steam pipe line near Camden Yards still ringing in the ears of some residents and baseball fans, city officials want you to know that they averted a possibly worse infrastructure failure three miles distant.

Ground zero of what Public Works Director Rudy Chow is describing as a “potentially disastrous water main break” is now covered by asphalt on Desoto Road as it passes under Interstate-95 southbound.

Last month, the agency realized that something was wrong with a 16-foot segment of the Southwest Transmission Main that runs beneath the street and carries fresh water for southwest Baltimore City, Baltimore County, and portions of Anne Arundel and Howard counties.

Fortunately, this section of the main was equipped with an acoustic fiber optic (AFO) monitoring system, the outgrowth of a collaborative project between the city and Howard County in 2007.

The AFO system not only gave DPW an early warning of distressed pipe. It also offered them a cost-effective way to pinpoint a potential fracture without the time and expense of ripping out an entire line to find it. 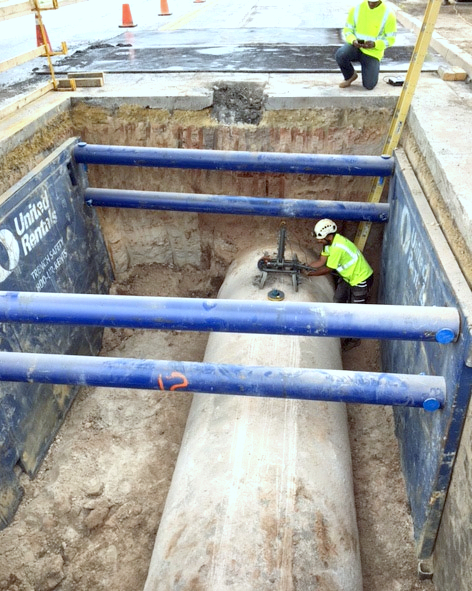 IN THE HOLE: An excavation chamber exposes the distressed section of the 54-inch-wide concrete transmission main before repairs were made. (Baltimore DPW)

The “Pings” Pay Off

The “pings” from the snapped wires, recorded by the acoustic monitors, set off alarm buttons at the Office of Asset Management formed by Chow.

“I created this office precisely to collect and utilize data that can help us stop problems before they happen,” Chow explained. “Our team moved quickly to prevent what could have been a disastrous water main break.”

The best option for fixing the pipe segment, it was determined, was to utilize high-strength tendon cables.

The process called for digging a hole around the distressed section of pipe, then installing the tendon cables around the pipe’s circumference.

After consulting with Howard and Baltimore counties – but not having time to go before the city’s Board of Estimates – Chow ordered contractors to start on June 5. The work was completed by Baltimore-based Anchor Construction, with help from Wachs Water Services, Pure Technologies Ltd. and Structural Preservation Systems. 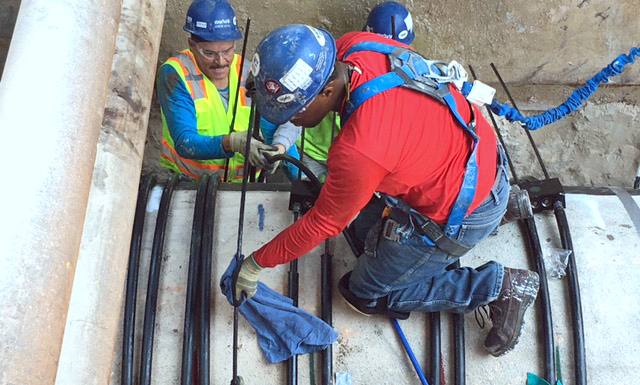 WRAPPING REINFORCEMENT: The tendon cables are installed around the concrete pipe. (Baltimore DPW)

As it happened, the repairs were finished shortly before last Tuesday’s steam pipe explosion that rained down plumes of dirt and debris on Eutaw Street, injuring five people and damaging more than 30 vehicles.

The 15-mile steam network that supplies heat for downtown buildings – owned by the city and managed by Veolia – pales in comparison to the more than 7,000 miles of water and sewage mains operated by DPW.

Both, however, share the distinction of being very old and, for the most part, poorly maintained.

DPW has been no stranger to infrastructure malfunctions, most recently the opening of a 25-foot-deep hole that gobbled up a portion of West Mulberry Street.

The city lucked out that the cave-in took place on the night of a holiday (July 4th), not on a weekday when Mulberry Street is consumed with traffic. Even so, it left a maze of surface transmission pipes – and the smell of raw sewage – that lingered across Baltimore’s West Side and Mt. Vernon neighborhoods for more than eight months.

The Brew reported that fixing the sinkhole and three related cave-ins on Centre and Cathedral streets cost over $15 million in emergency repairs.

Compare that to the $200,000 that DPW estimates averted a disaster on Desoto Road. 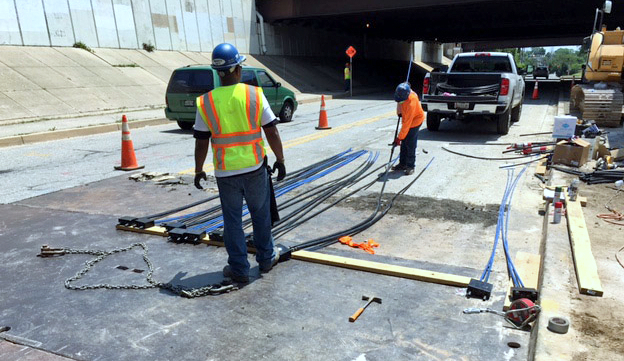 PREP WORK: High-strength tendon cables are laid out on Desoto Road prior to installation. (Baltimore DPW)