After a marathon hearing interrupted by a 15-minute scuffle between protesters and police, City Council President Bernard C. “Jack” Young got what he wanted today – preliminary passage of a bill that imposes mandatory one-year jail time for carrying a gun near a public place.

But the victory came at a price: the committee adopted an amendment by Councilman John Bullock that would make the mandatory sentence apply only to a second offense or if someone possessed a gun in connection with committing a crime.

The change means that the bill represents a minor modification to existing state law that already provides a mandatory sentence of one year on a second gun offense.

(NOTE: The state law does allow a judge to suspend all or part of the one-year sentence. But it also permits a judge to impose up to 10 years of jail time for the offense.)

Getting the bill through the committee proved an arduous and contentious process.

More than 100 people protested the bill, some calling it a measure to incarcerate young black men and others saying that improved mental health services, job training, drug treatment and other measures were the answer to escalating violence in Baltimore’s poorest neighborhoods.

“The mandatory minimum policy allows politicians and citizens to pat ourselves on the back,” said Betty Robinson of Show Up for Racial Justice (SURJ). “In reality, there are more equitable and effective solutions to heal and strengthen communities rather than continue to harm them. We need the political will to implement them.”

Young disagreed, saying in an emotional opening statement that the crushing experience of four murders in his family alone was a call to get tough on gun offenders.

The next step by Young and his Council allies is to bring the bill before the full body at its August 14 meeting. There has been talk that the measure could be expedited by voting twice (on second and third reader), which would land the legislation almost immediately on the desk of Mayor Catherine Pugh for her signature. 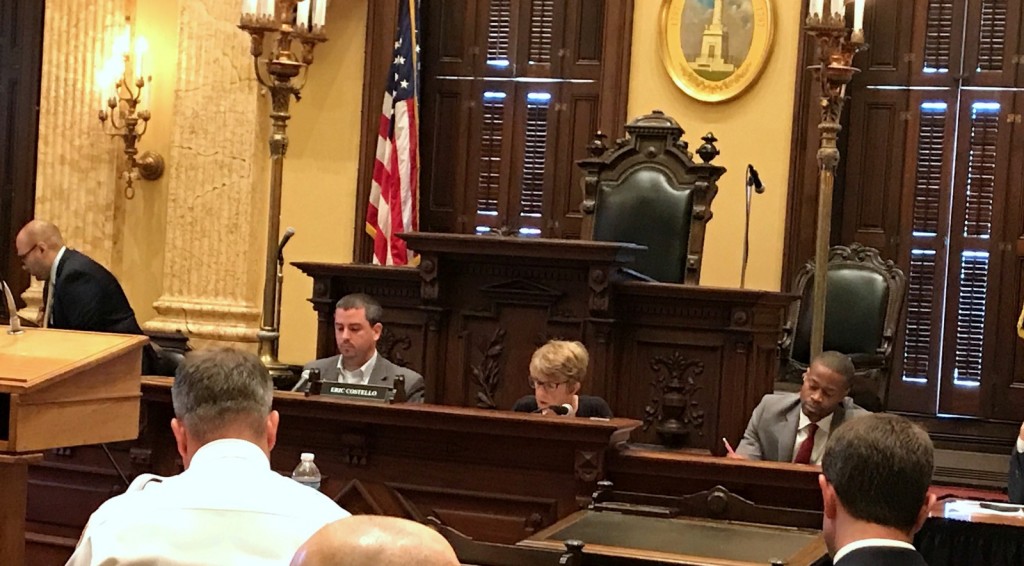 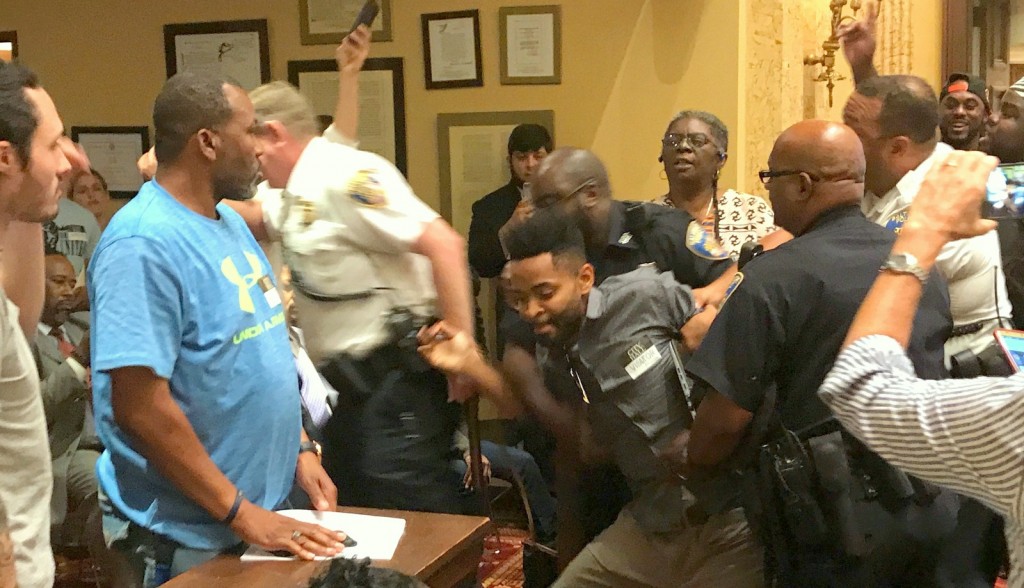 A protestor is removed from the Council chambers after a scuffle broke out during the public comment period. (Mark Reutter)

Vote Count as of Today

There are 15 Council members, 7 currently in favor, 5 opposed and 3 undecided.

In testimony today, Police Commissioner Kevin Davis threw his support behind Bill 17-0111, which would impose a one-year sentence for illegal gun possession within 100 yards of a school, church, park or other public place.

At the same time, Davis acknowledged that the bill would be “just another tool of many many tools in our toolbox to keep violent people out of our neighborhoods.”

“It’s not a silver bullet, it’s not a panacea,” Davis continued. “Any assertion that it is is simply a distraction technique. We do not believe this is the end-all, be-all for violence as such. It’s a tool.” 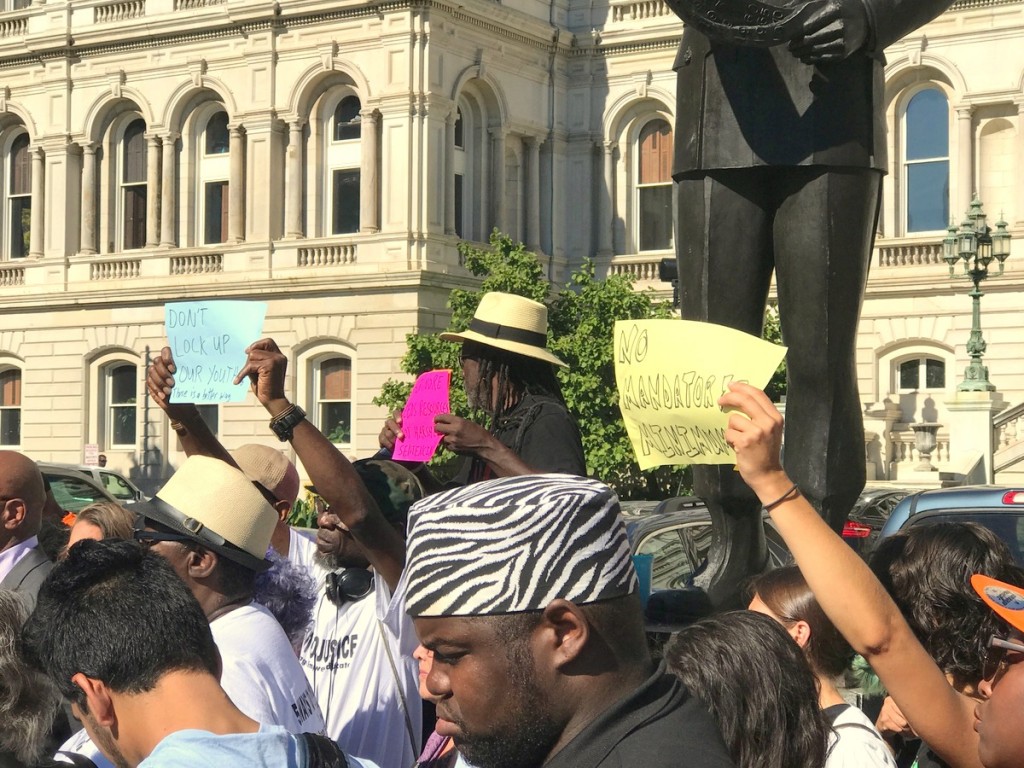 Opponents of the sentencing bill rally outside of City Hall before today’s hearing. (Mark Reutter)

So far, there have been 198 homicides in 2017 – more than the entire number in 2011 – putting Baltimore on track as one of the most violent cities in the nation.

Davis said handguns are involved in about 86% of the murders and complained that judges allow gun offenders to serve minimal terms, sometimes only a few weeks or months, after they are convicted.

Having unsuccessfully tried to get the Maryland legislature to get tough on handgun violations, Davis said it was time for Baltimore to “hold people accountable for their actions.” 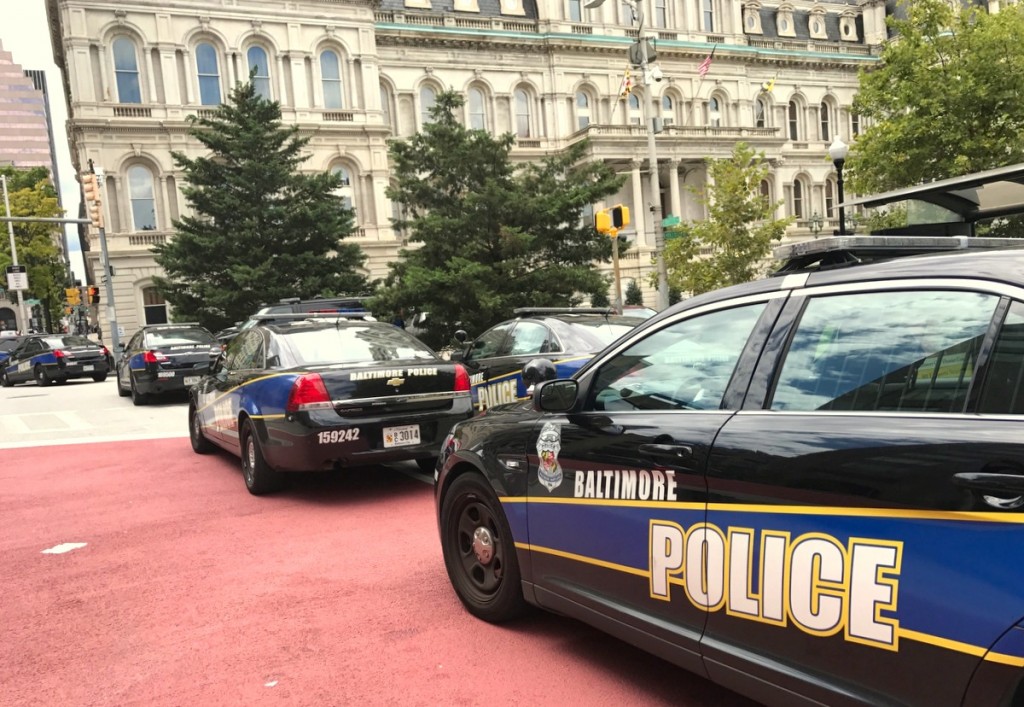 Some of the police vehicles gathered outside of City Hall during today’s Council hearing. (Mark Reutter)

Davis said the measure would not lead to mass incarceration of young black males – as feared by some opponents – because police officers would use the same procedures they now use to make arrests.

“Will they be carrying measuring tape?” asked Councilman Kristerfer Burnett, referring to the 100-yard perimeter of a public building in which handgun possession would result in a mandatory sentence.

“We have a preliminary map for places that we think qualify. We have to do a lot more work and develop a system at Central Booking where the assistant state’s attorney will make a determination if the arrest meets the criteria,” Davis said.

“Are you indicating that  you’ve already outlined which communities will be impacted by this more disproportionate[ly] to other communities?” Burnett asked.

Davis replied that he would be happy to share the map with Council members once it has been finalized. 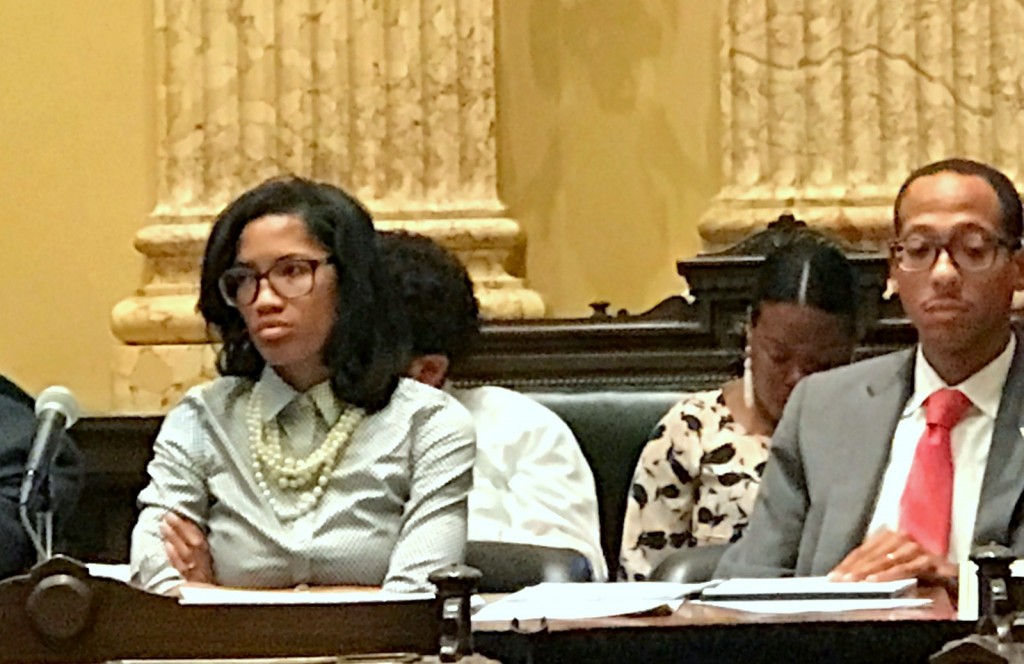 Shannon Sneed, from the Eastside’s 13th District, and John Bullock from West Baltimore’s 9th District, at the hearing. (Mark Reutter)

Conspicuously absent from today’s hearing was Marilyn J. Mosby, the state’s attorney, whose prosecutors are responsible for bringing gun violation cases before the courts.

Mosby also was not present at the July 14 press conference when Mayor Pugh unveiled the mandatory gun possession bill.

Caron A Brace, Mosby’s chief of staff, issued the following statement to The Brew tonight:

“Our office is committed to holding criminals who wreak havoc in our city accountable for their actions; and while we previously informed the Council that we would not be in attendance at [today’s] hearing, if this bill passes, it will be a tool used within our discretion for violent offenders.”

Testifying in favor of the bill were three state legislators – Del. Curt Anderson (43rd), Del. Cheryl D. Glenn (45th) and Sen. Joan Carter Conway (43rd), who all pledged to do more in the next legislative session to punish repeat offenders.

When it came time for members of the public to speak on the bill, a scuffle broke out after several audience members yelled that Chairman Costello was giving preferential treatment to supporters of the bill.

About a dozen people pushed and shoved and shouted out their frustrations. Police removed at least three  people from the Council chambers before order was restored.

More than 20 police cars subsequently gathered outside of City Hall, with officers on standby in the building, while a police helicopter whirled overhead.

There were no further disturbances as the hearing plodded on until late afternoon.

“A 29-year-old male was taken into custody as well as a 27-year-old male. The 27-year-old male complained of chest pains after being arrested. He has been transported to a local hospital for treatment.  Both men will be charged. Once that occurs, we will release their names and charges.”