The Department of Public Works will limit compensation to property owners faced with damage from sewage bubbling into their basements and bathrooms to $2,500 per dwelling per event.

On Monday The Brew reported that the city will establish a reimbursement program as part of a modified sewage system consent decree that was approved today by the Board of Estimates.

The decree pushes back from 2016 to 2022 the deadline for completion of engineering fixes aimed at controlling the surges of stormwater that enter (and sometimes overwhelm) the sewer system during heavy rainfall.

The agreement between the city and federal and state authorities delays until year 2030 the full complement of projects and programs that will get Baltimore into compliance with the 1972 Clean Water Act.

With the prospect of five more years of overflows in the sewage system, DPW says it will set up a program to compensate residents with basement backups.

The program was described today as “a good start” by Tom Pelton of the Environmental Integrity Project, which documented the impact of sewage backups on homeowners in a December 2015 report.

“Previously, the city had nothing going to help these people and now they’re putting something together. This is good news, though, of course, the devil will be in the details.”

So far, the city has not provided many details except to indicate that the compensation program would cover the costs of disinfecting and cleaning up a sewage spill.

On the other hand, the cost of modifying household plumbing – to make sure a surge from a city sewer line will not enter the home again – would not be covered by the program’s maximum of $2,500 payouts.

DPW said property owners would be entitled to file a general liability claim with the city that could cover major repairs or damage.

Property owners can already file such a claim, but fewer than one in five claims are successful. Compensation is often minimal, around $1,500.

Environmental Integrity examined 34 claims filed by residents of Grove Park and West Arlington in Northwest Baltimore. All of the claims were either denied or unaddressed, the group found.

In one example, sewage poured into the basement of a home on Elderon Avenue twice in an 18-month period, destroying furniture, a television, a hot water heater and “a lifetime of photos.”

The city refused to compensate the owners, a retired couple, who forked out $4,500 to replace the appliances and repair their basement and bathroom. 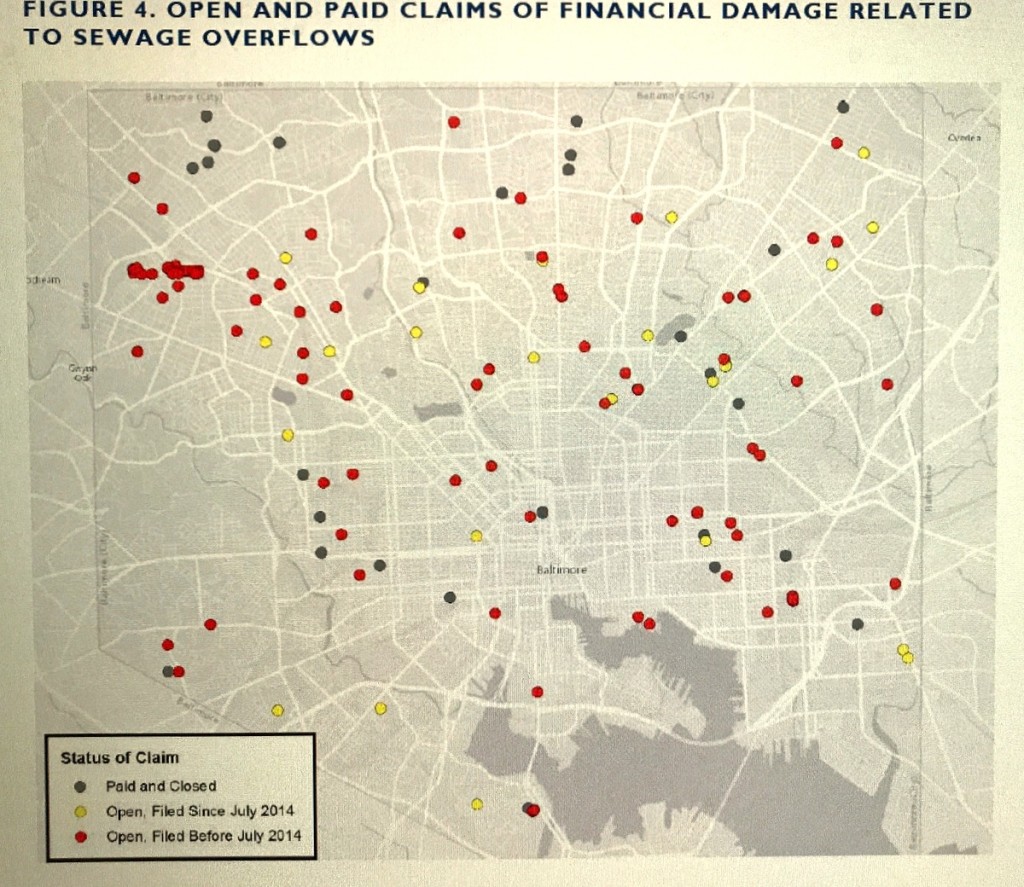 Location and status of 2014 claims by homeowners of sewage backups. (Environmental Integrity Project)

According to DPW, the compensation program will begin six months after the modified consent decree is approved by a federal judge (which is not expected to happen until this fall).

This indicates that claims won’t begin to get processed until spring 2018, at the earliest.

The program will start as a three-year pilot program, but will continue for the duration of the consent decree, which is set to expire in 2030.

DPW today set the cost of compliance with the modified decree at $1.2 billion.

A big part of the price tag will come from the rebuilding of the 100-year-old “headworks” of the Back River Waste Water Treatment Plant, which currently restricts the flow of sewage during heavy storms through a dam-like structure.

To compensate for this hydraulic restriction, DPW originally designed a group of overflow pipes across the city to release surcharges caused by stormwater entering the system.

These “structured” overflows relieved pressure on the system by dumping the excess effluent into the Jones Falls and, sometimes, onto city streets – all in violation of federal law.

While DPW has since deactivated many of these overflow pipes, an appendix in the modified decree shows that more than 10 are still available when needed.

The most frequently used outflow pipes are located along Falls Road near the Baltimore Streetcar Museum and underground at 428 East Preston Street.

During heavy rainfall, these pipes can release 10 million or more gallons of sewage/stormwater into the Jones Falls, which then carries the tainted mix into the Inner Harbor.

Other active overflows are located below Charles and Lanvale streets in the Station North entertainment district and below East Eager Street near the Johns Hopkins Medical Center.

During a storm surge, the rainwater-infused sewage can be seen bubbling up from the manhole covers at these sites. And, sometimes, pressure inside the pipeline builds up enough to pop open a manhole lid, releasing a torrent of effluent. 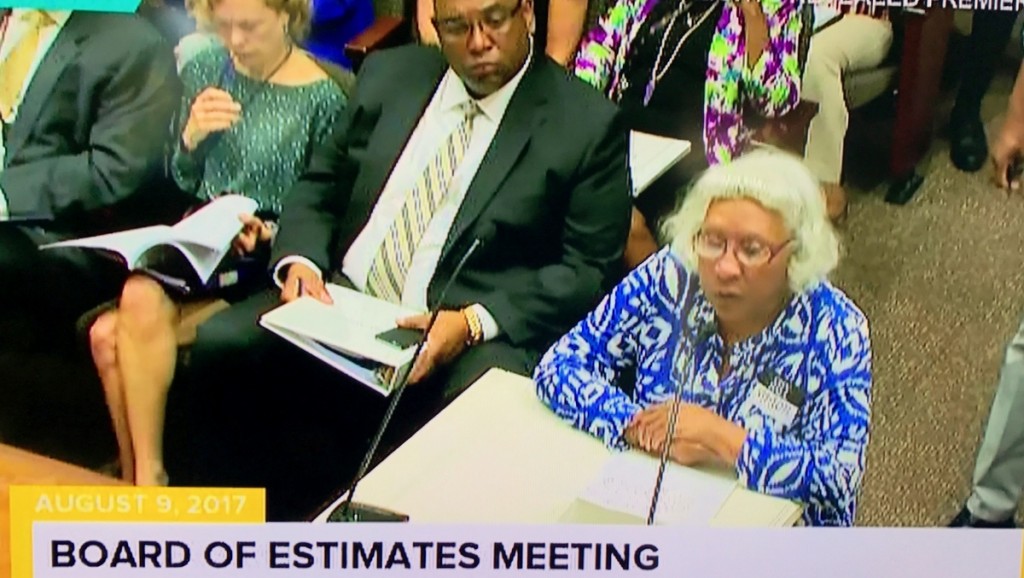 Helena Hicks addresses the Board of Estimates this morning. (Charm TV)

We Will Float Away

According to Environmental Integrity, sewage backups can occur in any area of the city, but have been concentrated in Northwest Baltimore.

Before approving the decree today, the Board of Estimates listened to two representatives from the Northwest Council, which represents some of the most impacted communities.

Grove Park resident Helena Hicks called on the board to place a moratorium on new construction in the area until the sewage backup problem is resolved.

“If you don’t do anything now, you won’t have to wait until 2030 [to meet the decree’s deadline] because we will have floated away,” she quipped.

Derrick Lennon, of the Glen neighborhood, said the city should speed up work on improvements, noting that they were originally mandated back in 2002.

“I understand that this project is a major undertaking for the city,” he said, “but it needs to move forward to insure that property owners do not continue to bear the burden of backups while the city gets a break from the federal government.”

“What we can control,” she continued, “is what happens in neighborhoods and communities. So let me make the suggestion you get with your Council person to make sure that your voices are being heard.”

With that remark, the spending board voted to approve the modified decree, which will now go to the Environmental Protection Agency and Maryland Department of the Environment for a final review before it is presented to a federal judge.