A year ago, victims of basement sewage overflows complained that while city officials were getting a five-year break to fix Baltimore’s ancient sewage system, they were taking no steps to help residents suffering from frequent and costly fecal matter back-ups.

“That’s five years! So we live with sewage for another five years?” asked one irate resident at a June 2016 hearing required under the revised consent decree struck between the city and the Environmental Protection Agency and Maryland Department of the Environment.

In response to the public criticism, The Brew has learned that a city-funded reimbursement program has been added to the consent decree plan that the Board of Estimates is expected to approve on Wednesday.

“The reimbursement program will be wholly separate from the claims process administered by the city law department,” Department of Public Works (DPW) spokesman Jeffrey Raymond confirmed this afternoon.

In the legalese that will be incorporated in the consent decree, DPW pledges “to address verified cleanup, disinfection and homeowner and tenant costs resulting from capacity-related backups.”

Asked how much money would be available and what the process would be for compensating claimants, Raymond said such specifics are “still in the talking stages.”

• Basement sewage backup victims: Nothing in consent decree for us (6/8/16)

Helena Hicks, one of the most outspoken critics of the modified plan, called the reimbursement program “a step in the right direction.”

She said the Northwest Baltimore communities of Grove Park, West Arlington, Howard Park, Glen and Falstaff have been cursed with sewage backups for years.

“This is raw sewage, fecal material, coming up through the toilets and drains and into basements and bathrooms, causing a terrible amount of damage in our communities,” she said tonight.

“My question to DPW is: Can this program be enacted quickly? Some homeowners have to take out loans to fix their properties it’s become so bad.”

Asked why the sewage reimbursement promise was added to the agreement, Raymond said that the city wanted to respond to citizen feedback.

The modified decree sets 2030 as the new deadline for Baltimore to complete repairs that would end all sewage releases that violate the 1972 Clean Water Act.

Under the original 2002 agreement, the city had until January 1, 2016 to complete an overhaul that would stop decades of raw sewage from sluicing into local waterways and backing up in residents’ homes.

But when the original deadline came after 14 years, only half of the necessary work had been finished, despite the spending of more than $800 million and the tripling of residential water and sewer rates.

The renegotiated agreement gives the city until July 1, 2022 to close the “structured overflows” that send millions of gallons of raw sewage mixed with rainwater into the Jones Falls and other local waterways after a major storm.

The closing of these structured overflows – combined with the rebuilding of the Back River Waste Water Treatment Plant’s headworks – is expected to reduce the raw sewage spillage problem by 83%.

Phase 2 construction, aimed at increasing the system’s hydraulic capacity, is not expected to be completed until 2030.

At the end of this period, a reportable sewage incident is expected to occur no more than once every five years – as compared to a dozen or so times a year currently. (Latest two releases: here and here.)

Environmental groups have called the new deadlines too lax.

“We said the deadline should be 2020, especially if we have this make-the-harbor-swimmable-and-fishable-by-2020 goal. How can you achieve that if there’s still human waste in it?” said Tom Pelton, a spokesman for the Environmental Integrity Project. 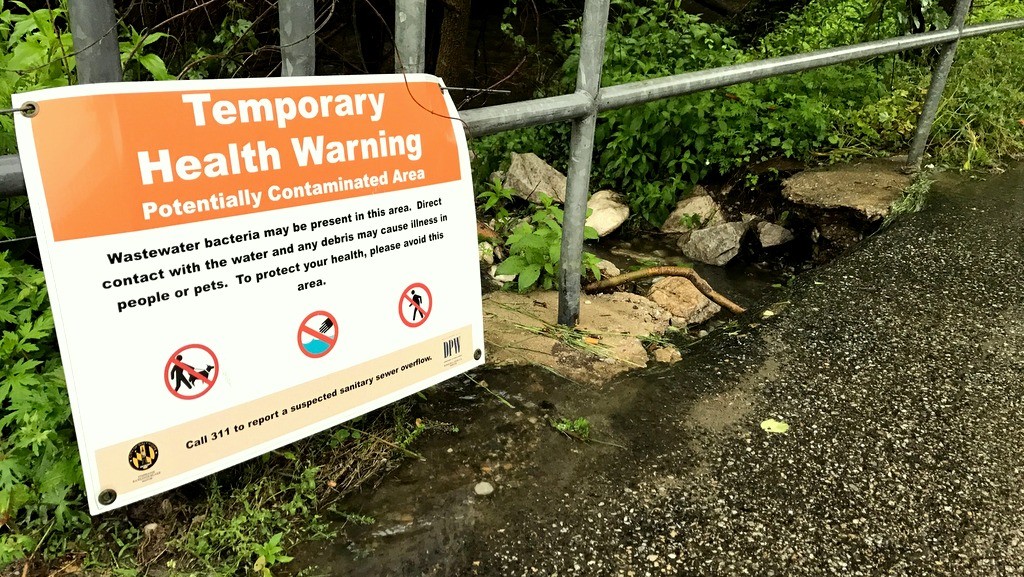 Sewage from an overflowing manhole runs into the Jones Falls near the structured outfall (No. 67) located north of the Baltimore Streetcar Museum. (Mark Reutter)

“And,” Pelton added, “how can we allow this if there are people experiencing these overflows in their homes?”

The summary sheet of the new agreement, released today, promises that DPW will prioritize the inspection and repair of sewer lateral pipes.

These are the pipes that transfer wastewater from homes to the mains under the street. Leaks and breaks in lateral pipes can allow sewage to migrate into local waterways as well as seep into stormwater pipes and drains that empty into the harbor.