Lauding Baltimore’s revised sewer system clean-up agreement with the federal government as “the product of hard work and intense negotiation” and “the best path forward for citizens,” Department of Public Works Director Rudy Chow urged listeners at a meeting last night to focus on the future.

But citizens from the neighborhoods hardest hit by a spike in basement sewage backups – caused by closed-off sewage outfalls as DPW tried, unsuccessfully, to comply with the original 2002 consent decree – kept trying to steer the discussion back to the reeking present.

“We get raw sewage – you understand what I’m saying? Fecal matter in our homes!” said Helena Hicks, a longtime civil rights activist who lives in the Northwest area most affected by the backups.

“When it stinks in the harbor, it stinks in our neighborhoods,” Hicks said, noting that several neighbors had basement backups just last week.

Merriman Wilson described having three backups in his Grove Park home in the last five years – including one that filled his basement up to the third step – and getting “a pittance from the city” after his insurance was dropped.

The “back-flow preventer” that the city installed in his pipes just pushes the problem of backups to his neighbors, Wilson said, calling the city’s approach “like putting a band-aid on a cancer.”

Addressing about a dozen officials in the room representing the U.S. Environmental Protection Agency (EPA) and Maryland Department of the Environment (MDE) as well as DPW, Hicks asked a blunt question.

“Since we are the community that has the most significant impact of nothing being done for 14 years,” she said, “will we have a priority to be first in line to have some relief?”

In his reply, Chow went back over the 34 projects completed, underway or planned under the Phase I part of the modified consent agreement, urging citizens to “give us the addresses” of basement backups and offering to “check those addresses against the upcoming projects.”

He told Hicks that Phase 1 improvements would be completed by 2021. “That’s five years! So we live with sewage for another five years?” Hicks replied. 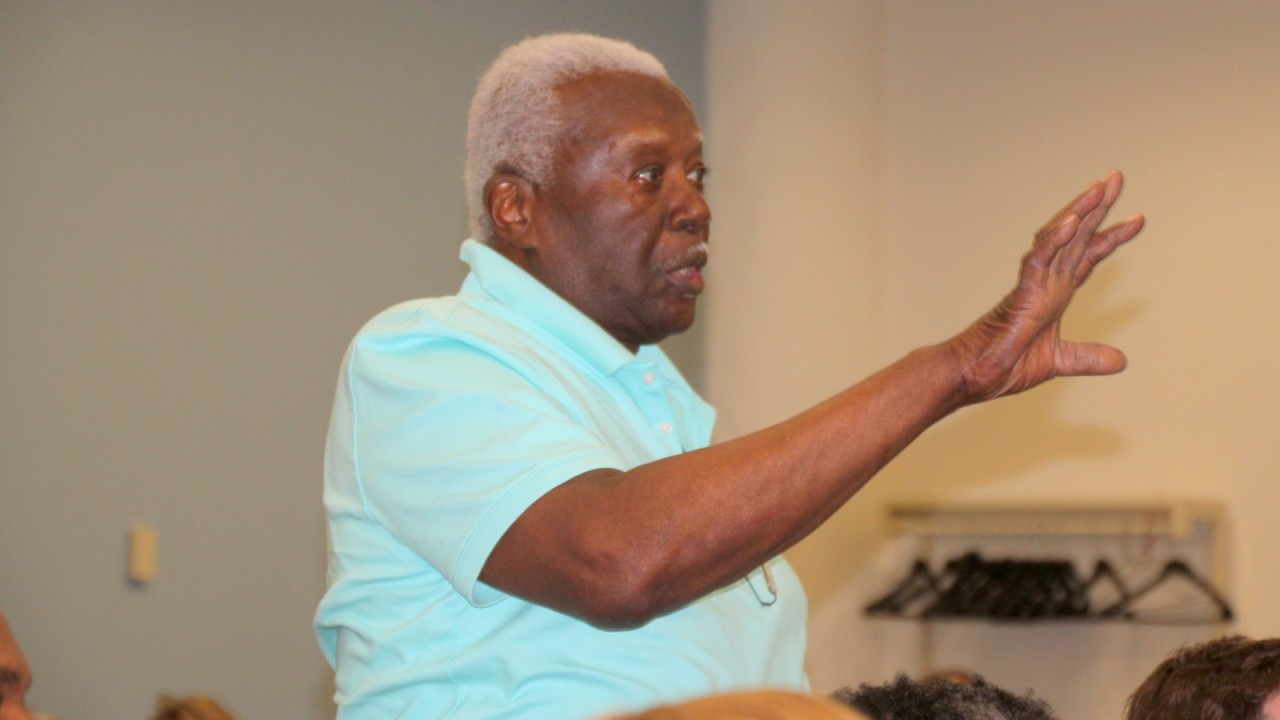 Such raw moments were repeated several times at the gathering of more than 100 people at MDE headquarters, the first public hearing to be held on the 91-page draft document, released last week.

In the original consent decree, the city had promised by January 1, 2016 to comply with the Clean Water Act by ending the practice of releasing raw sewage into area waterways during heavy rainfall. But after spending $700 million and tripling water and sewer rates since 2002, only half the necessary work has been finished.

Officials estimate the new agreement will eliminate 83% of the sewage overflows by 2021. The agreement specifies all structured overflows to be eliminated by July 1, 2022 and all the terms of the decree to be met by 2030.

Meanwhile, sewage is still leaking into waterways (one outfall released 30 million gallons of sewage into the Jones Falls this winter) and into basements, an aspect of the problem that complaining residents say often gets lost.

“How many times can we keep putting out money to clear these things up,” one woman asked Chow and Dana Cooper, chief of legal and regulatory affairs for DPW.

“I don’t think either one of you will come home tonight and find raw sewage in your homes,” she added.

Andy Hinz, of Bolton Hill, drew applause when he tried to articulate the disconnect in the room.

“What you’re hearing is people have a big problem with the consent decree as drafted going forward without some sort of short-term addressing of the very critical needs that are here right now,” he said.

According to a December report by the Environmental Integrity Project, the Baltimore Law Department received 413 claims for damage cause by backed-up sewers between 2012 and 2015, but only 38 of them (9%) have been settled.

EPA officials indicated residents shouldn’t expect too much help from the federal government. “We have only so much authority under the Clean Water Act,” said EPA’s chief of National Pollution Discharge Elimination System Enforcement during the consent decree negotiations.

Asked why the city isn’t being more helpful to residents with backups, DPW’s Cooper said the planned projects – including eliminating a misaligned pipe leading to the Back River Water Treatment Plant – would gradually reduce the frequency of basement backups. 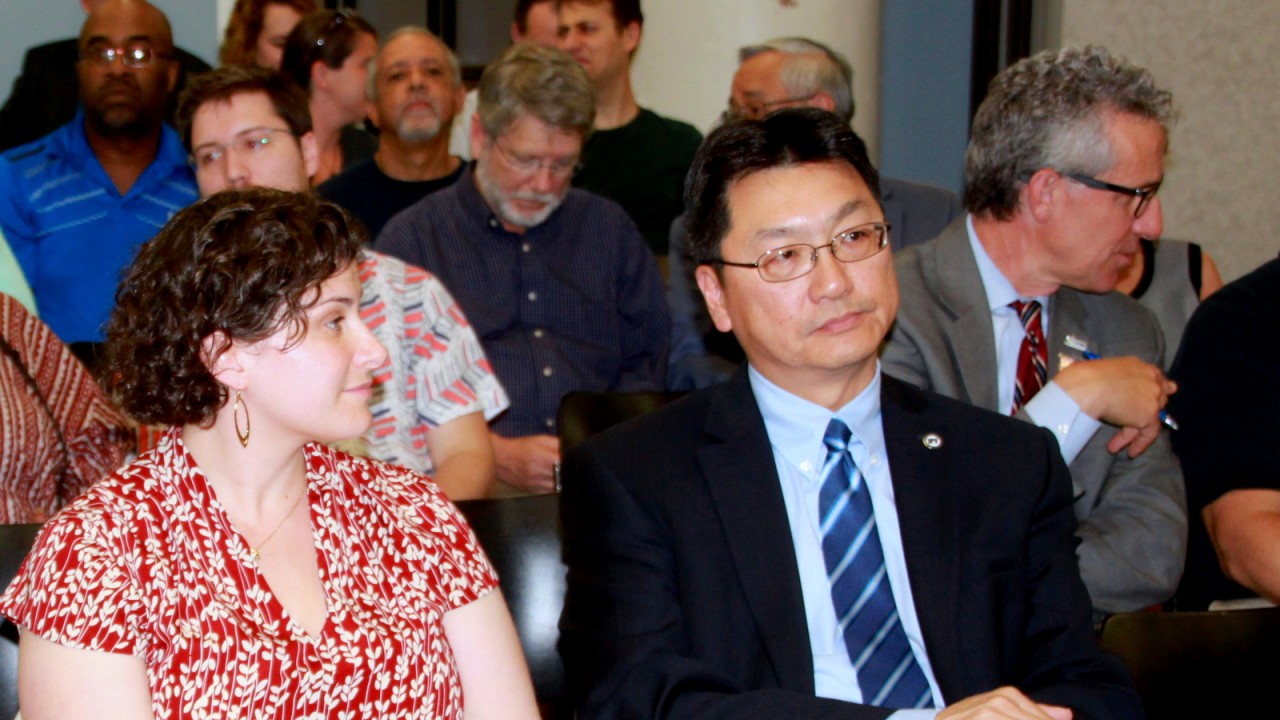 “There’s also problems on the private side that are not within the the city’s area,” she said. “So if homeowners are putting things down their drain like grease that don’t belong there, if you’re not maintaining the private side of the line, that can also cause a backup.”

It was one of several times that city officials wagged a finger at citizens for putting rags, grease or other inappropriate items into the city sewer system.

That came off as “tone-deaf” and “offensive” to one member of the audience, Blair Ducray-Oppat. “To have that question met by the city with, ‘Oh, you’re probably doing this to yourself!’” he said.

No Help from Feds and State

Could there be federal funds available to help residents, one member of the audience asked.

There was was a long pause.

Jon Capacasa, EPA’s Region 3 director of water protection, described a “revolving fund” that “provides money for the State of Maryland, which can make it available to Baltimore in the form of low-interest loans. That’s all I know of.”

Maryland Environment Secretary Benjamin Grumbles noted that the state “does have some dollars in the Bay Restoration Fund.” Starting July 1, he said, “sewer work like Baltimore’s will be eligible.”

“But you’re right,” Grumbles added, “most of this is on the shoulders of the city.”

On the subject of funding, activist Kim Trueheart said the city should “put aside some of that [water and wastewater] bond money to address citizen expenses,” and criticized officials for what she said was mismanagement of funds to repair the aging sewer infrastructure.

Trueheart pointed to an Extra Work Order, approved this morning by the Board of Estimates, for a recently completed sewer project along Gwynns Falls that has been discovered to have “faults in the sanitary line” and will require a nine-month contract extension.

“I want clear water like just everybody else, but I’m tired of throwing great money down the drain [when] there are contracts they award that have to be redone,” Trueheart said. “Who’s watching this?”