Sally Freedman uses a walker, but she had no trouble keeping up with the crowd of more than 1,000 people who flooded the streets of Baltimore in response to Saturday’s white nationalist rally in Charlottesville, Va. that erupted into violence and the death of one counter-protester.

The 90-year-old was fired up and motivated.

“It’s unbelievable to me that we have to march against Nazis. I thought we had a war to get rid of them,” said Freedman, accompanying her daughter and granddaughter yesterday on a march that began in Wyman Park Dell at the bronze memorial depicting Confederate generals Robert E. Lee and Stonewall Jackson.

“I’m here to support all the people who feel we should not have the KKK and Nazis and racists,” said Freedman, of Baltimore. 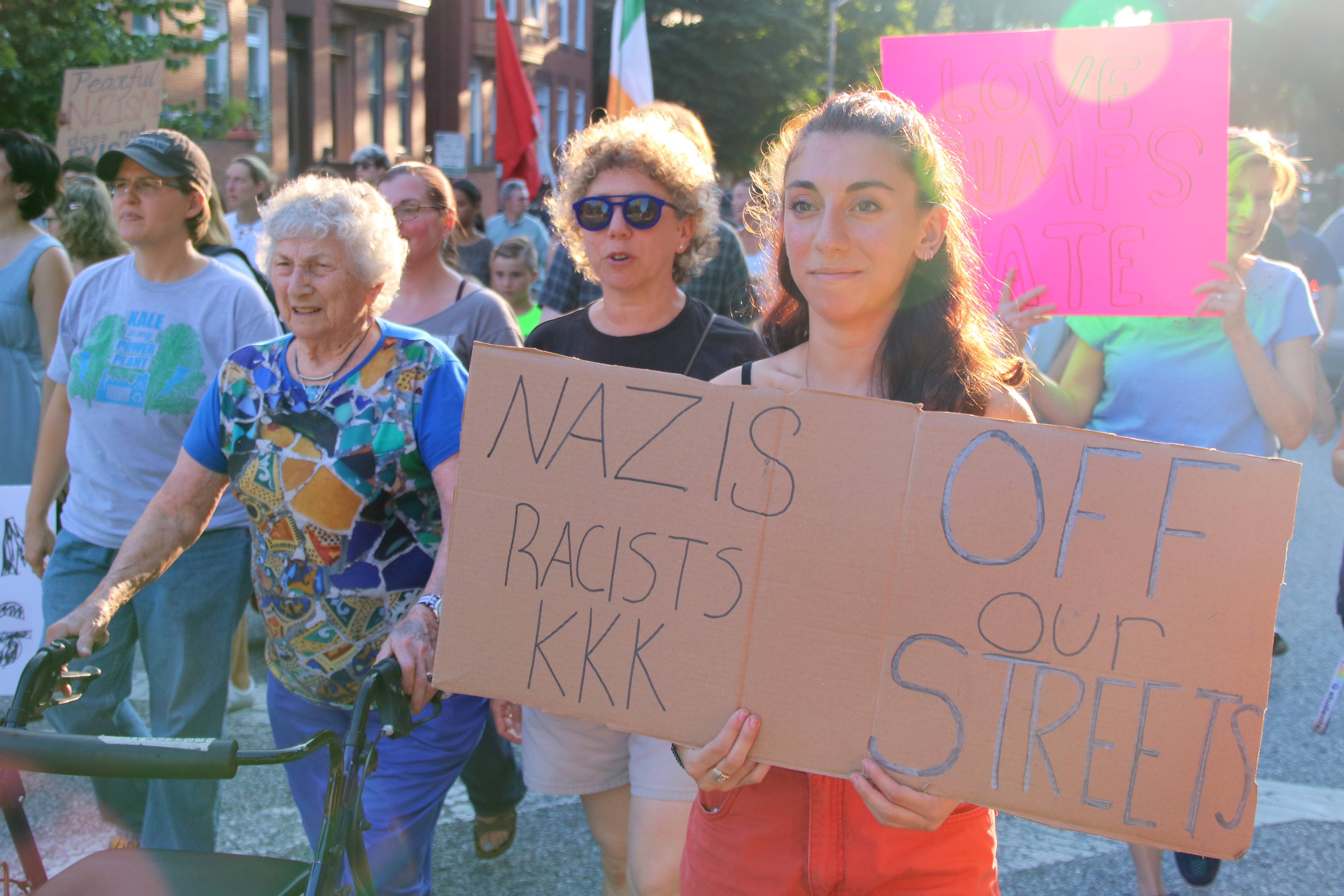 Sally Freedman (at left, using walker) was part of yesterday’s march in response to the alt-right rally and violence in Charlottesville over the weekend. (Fern Shen) 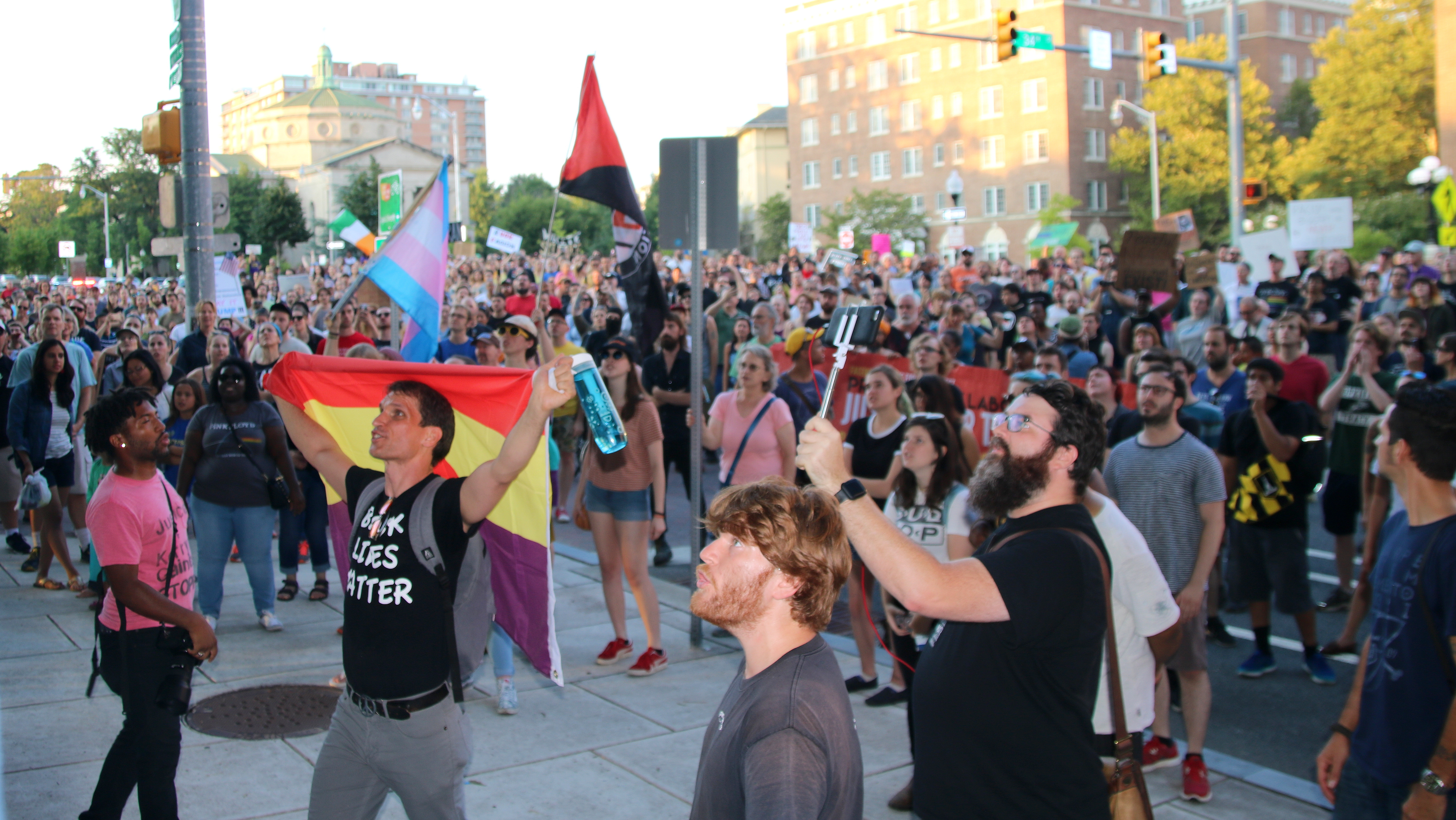 Protesters, who were primarily white, streamed past motorists who were for the most part black, frequently calling out to them.

Drivers rolled down their windows to speak with the protesters, beeped back in support and many whipped out cellphones to video the startling scene.

For Freedman, the images coming out of Virginia – white men with flaming torches waving swastikas and shouting racist and antisemitic chants – were especially chilling.

“Tell your reason!” her daughter Joan Freedman urged, explaining that her mother grew up in Poland.

“We got out of Poland just before the Nazis, but some of our relatives we left behind,” she said. “My family is smaller because of that.”

The white nationalists were in Charlottesville to protest that city’s plan to remove its Robert E. Lee statue.

There have been similar calls for the removal of Baltimore’s statues memorializing the pro-slavery, pro-secession Confederacy.

Last August, a commission appointed by then-mayor Stephanie Rawlings-Blake recommended removal of two of the statues and adding signs to contextualize two others.

But all four monuments remain, and Mayor Catherine Pugh is facing renewed calls to take all of them down.

Councilman Brandon Scott vowed yesterday on Twitter that he would introduce a resolution at today’s City Council meeting calling for removal of the four statues. 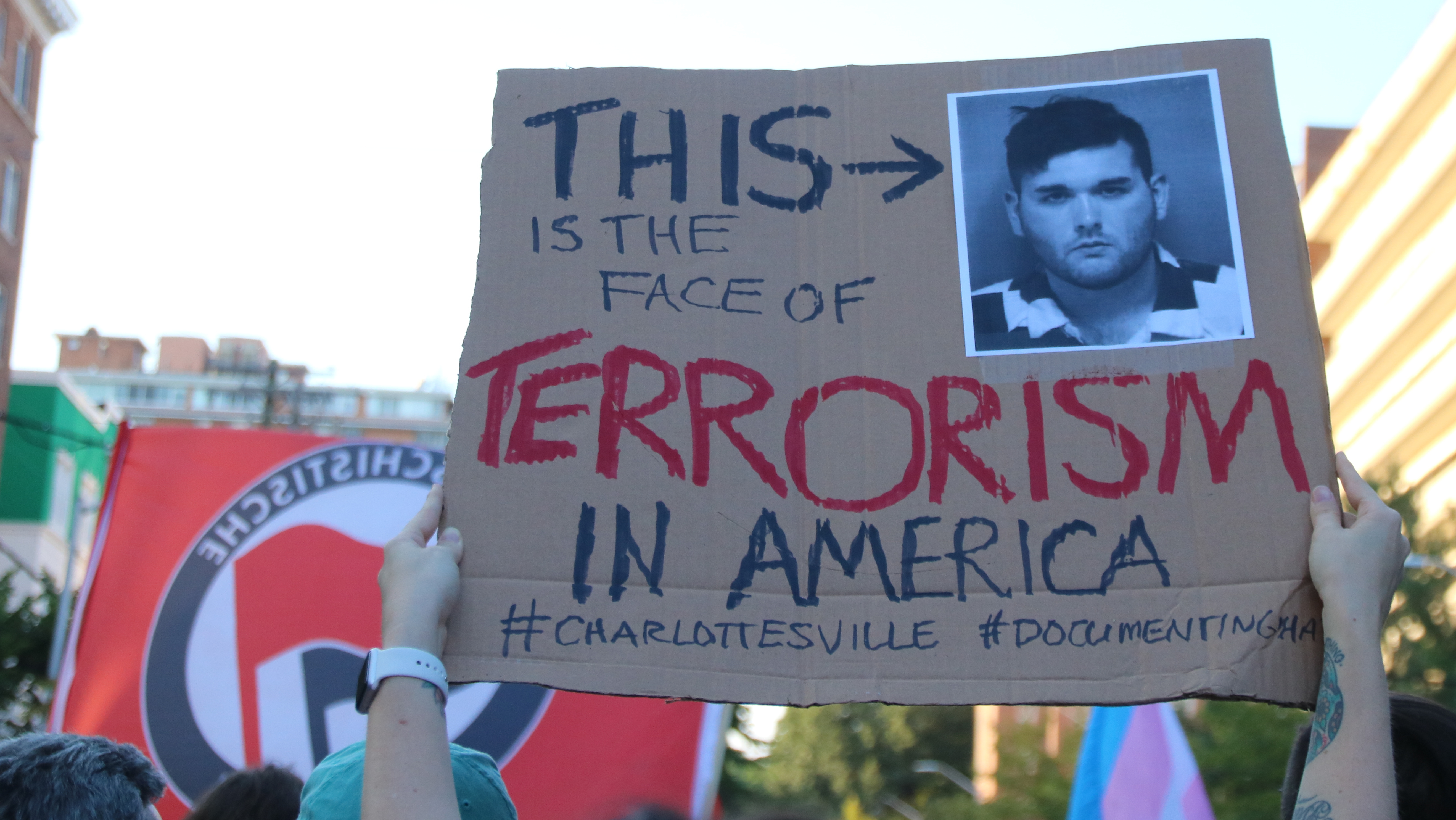 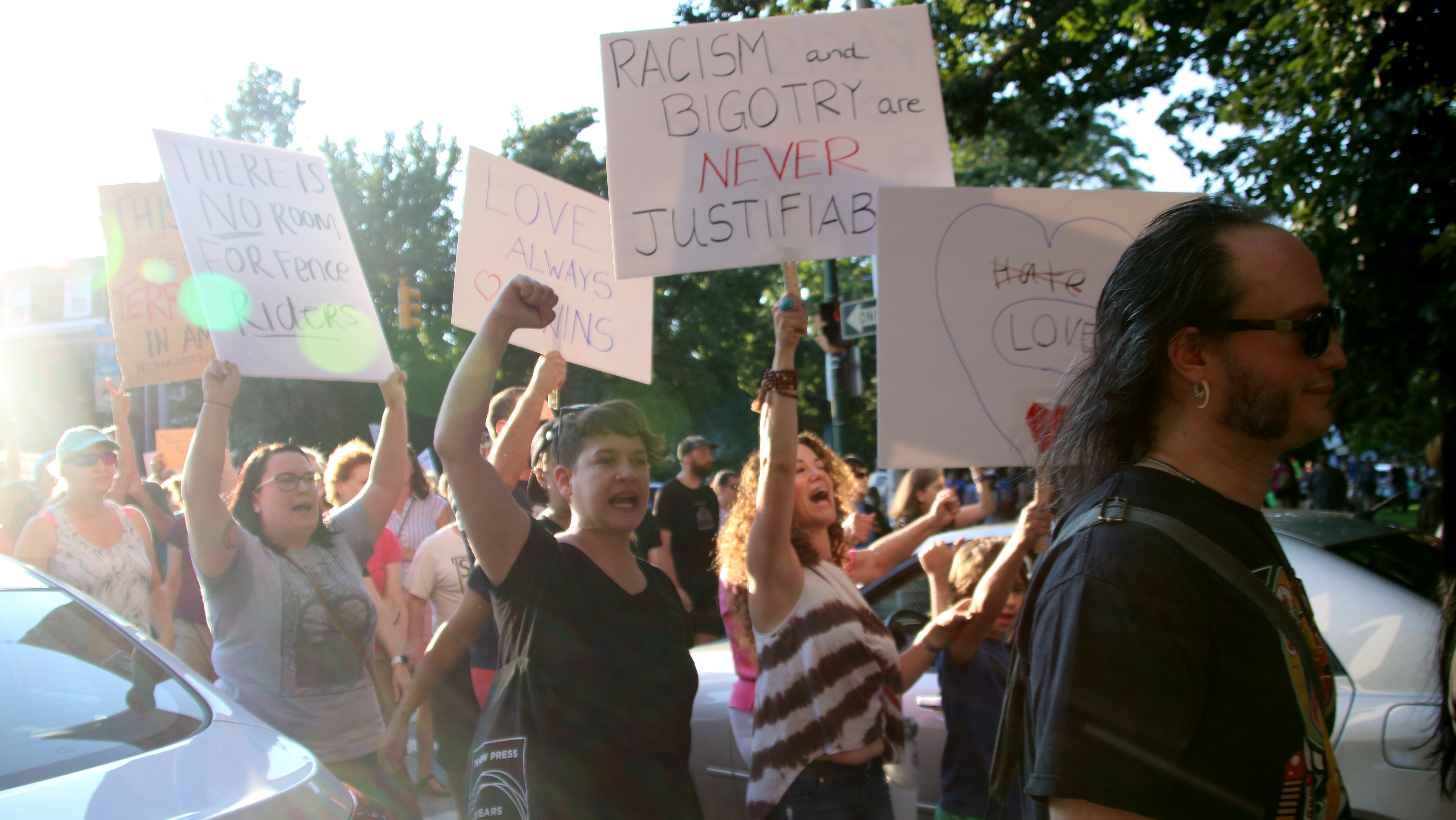 The demonstration went north on St. Paul Street and came back to Wyman Park via Charles Street. (Fen Shen)

“Monuments with ties to the dark side of America’s past have come under increased scrutiny with cities across the country debating on whether they should be removed,” Scott wrote.

“Following the acts of domestic violence carried out by white supremacist terrorist groups in Charlottesville, Va., this past weekend, cities must act decisively and immediately be removing these monuments,” Scott said.
_____________________________
BALTIMORE’S FOUR CONFEDERATE MONUMENTS

One speaker yesterday urged the crowd to move beyond advocating for the statues’ removal and join wider activism and protests against City Hall.

“We have systems and policies and practices even under black political leadership that need to come down,” said Lawrence Brown, an assistant professor at Morgan State University.

He spoke of how Baltimore was a hyper-segregated city and ticked off a series of policies that he said hurt the majority black population, including poor schools, lead paint in the housing stock and cancellation of the Red Line plan. 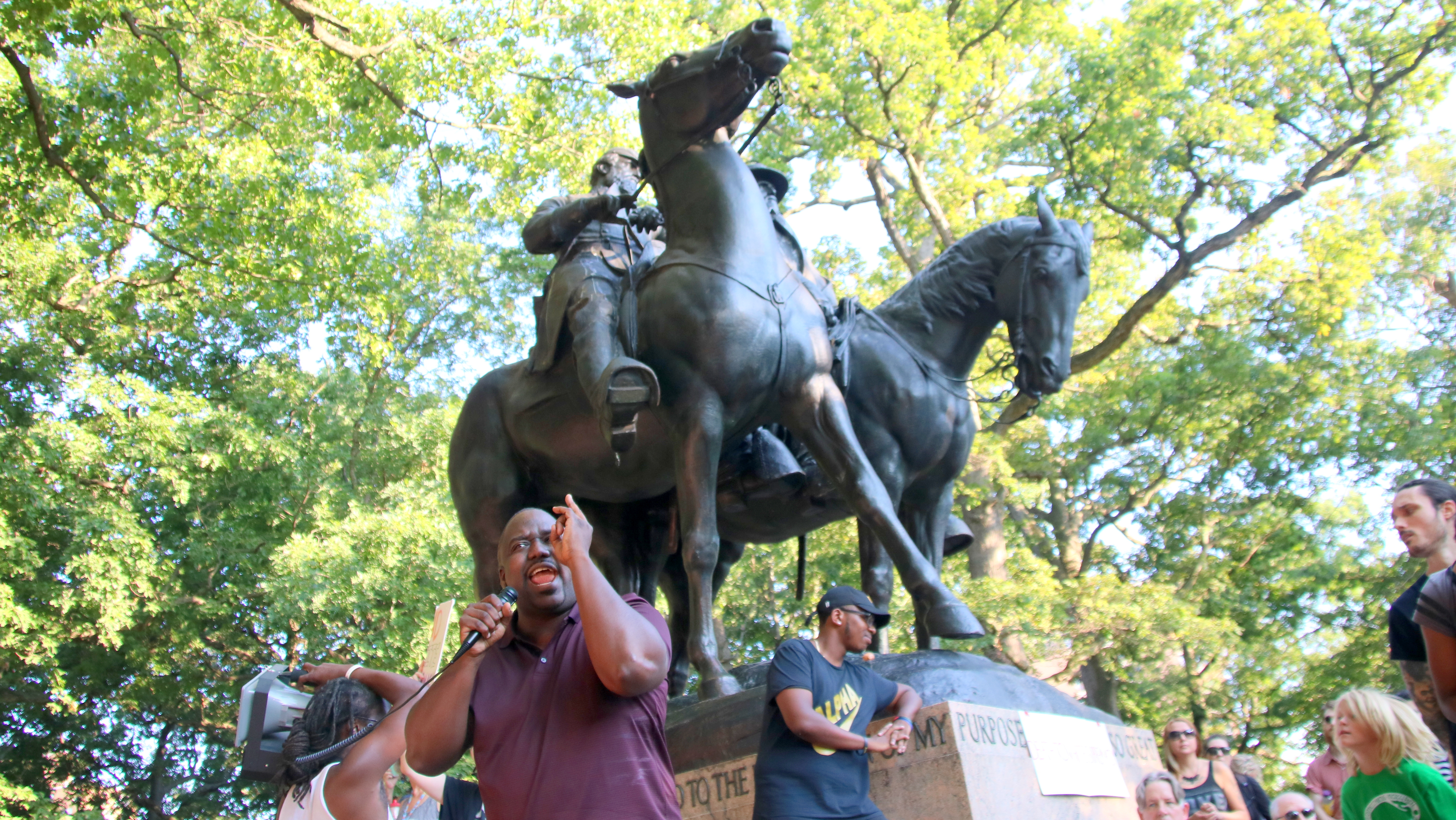 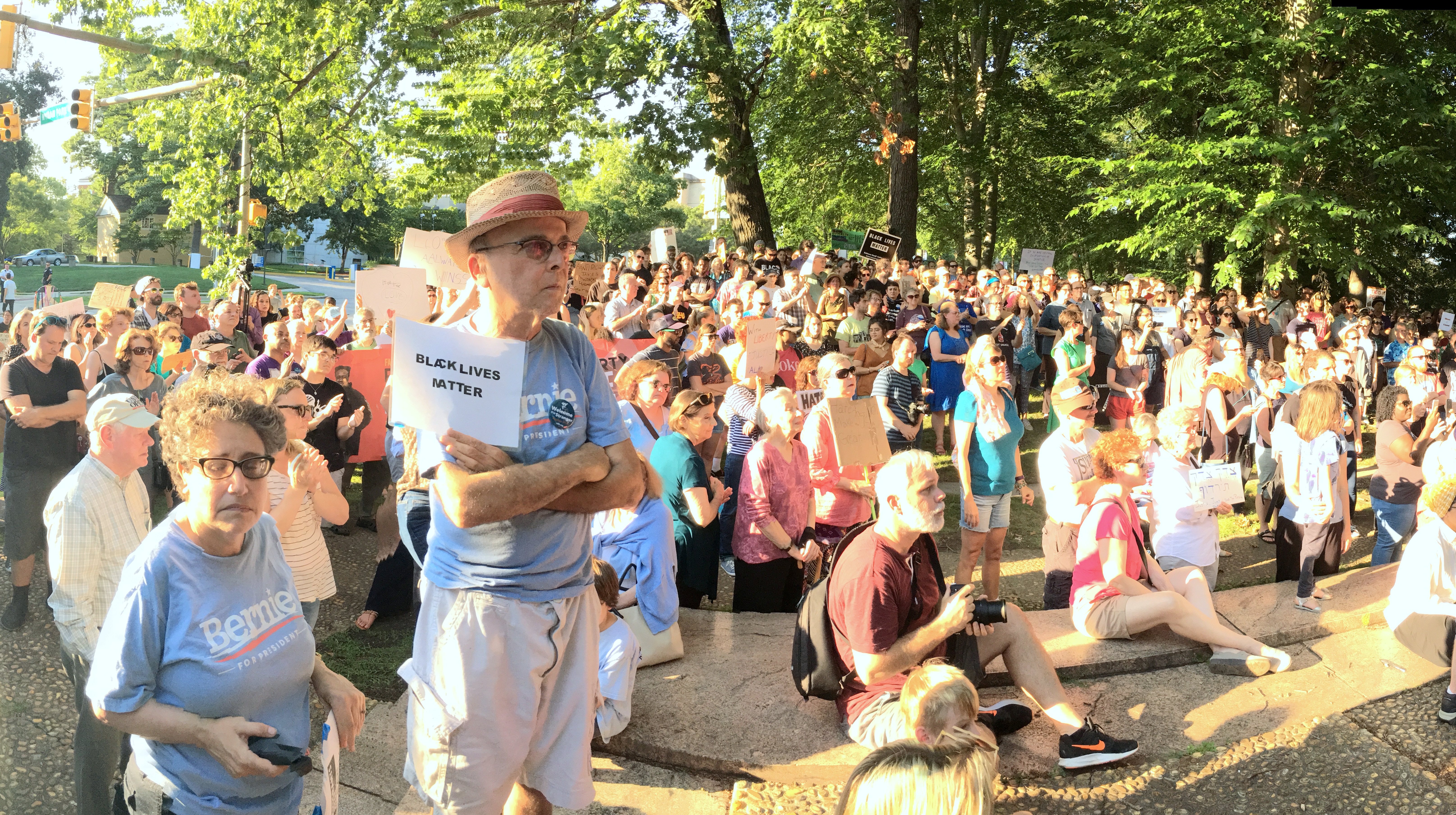 The crowd listens to speakers at the Lee and Jackson Monument. (Fern Shen)

“It’s not sexy. We’re not always going to have this moment to celebrate,” he said, gesturing to the crowd sitting under the trees at the park circling the bronze statues of the generals on their horses.

He urged his audience to come to City Hall for a protest before Monday’s 5 p.m. City Council meeting.

Before the night was over, activists added a final touch to their protest: they placed a large statue of a pregnant black woman, fist raised, in front of the Lee and Jackson Monument. 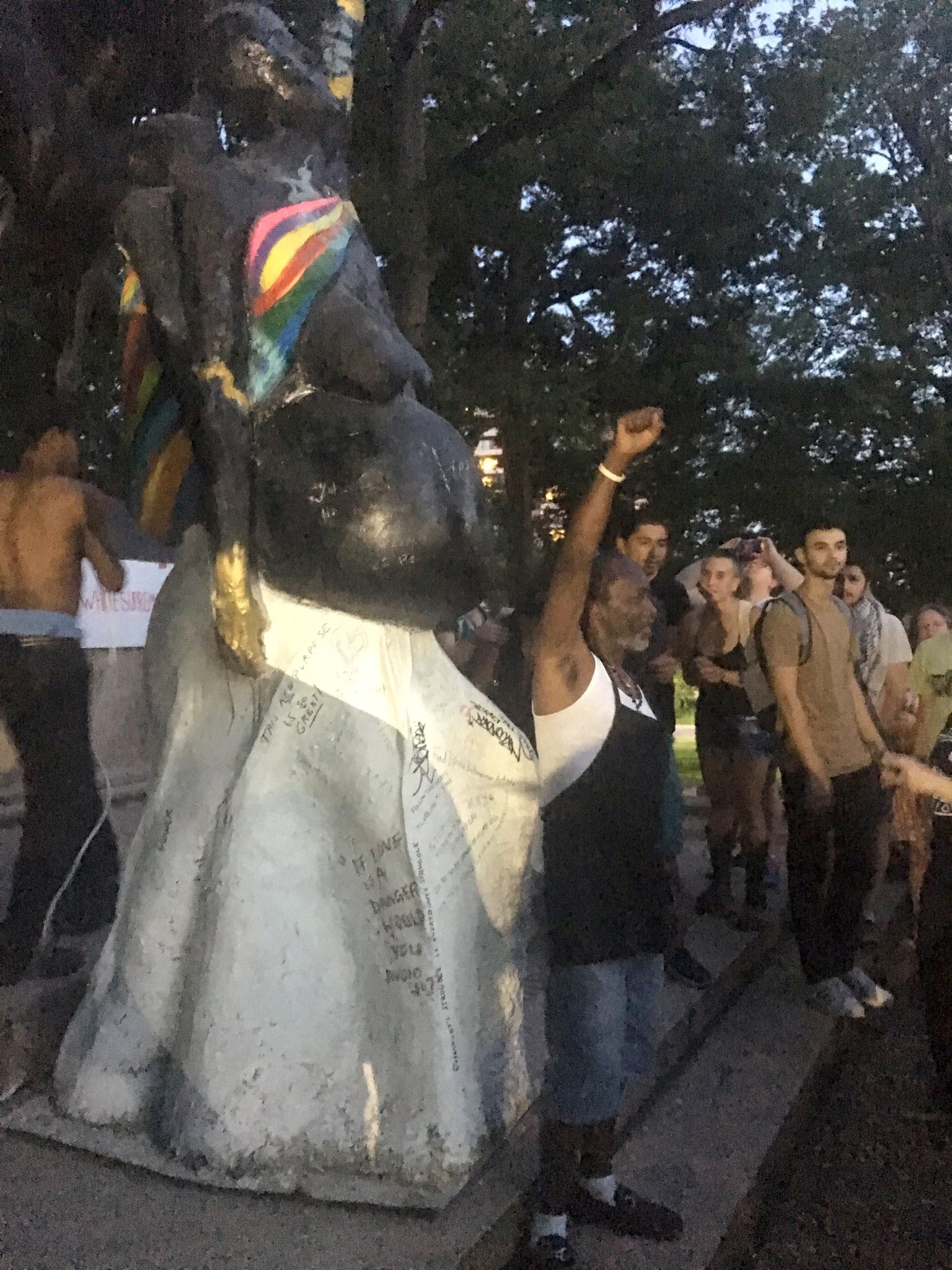 Photos of the statue, with activist Duane “Shorty” Davis present, were tweeted by the protest organizers, @BaltimoreBloc.