While national media swarmed City Hall this week to cover Baltimore’s overnight removal of its Confederate monuments, Mary Scott was inside one of about 20 matching red tents in front of the building to plead for a lower profile cause:

The plight of Baltimore’s homeless and struggling poor.

“I was more than excited to come out here and sleep in a tent,” said Scott, explaining she just recently had to leave her East Baltimore house after her boyfriend’s cousin was killed inside, making it dangerous to return.

“And now I get to keep the tent and maybe use it or give it to someone in need of it,” said Scott, 34, who works as a security guard in four office buildings near City Hall.

Scott said she’s been both a homeowner and homeless and has organized to help others in need of shelter.

Scott and dozens of other homeless people and their advocates have been sleeping at War Memorial Plaza since Sunday as part of a protest encampment organized by the Southern Christian Leadership Conference (SCLC) and supported by a number of local activist organizations including Baltimore Bloc.

“We need Mayor [Catherine] Pugh to do more for us and for this city – so many people are really poor here,” said the group’s City Hall liaison, Rashid Abdul-Aziz.

A carpenter and electrician who has been homeless since November, Abdul-Aziz needs lower spine surgery to recover from a recent injury he got on the job. 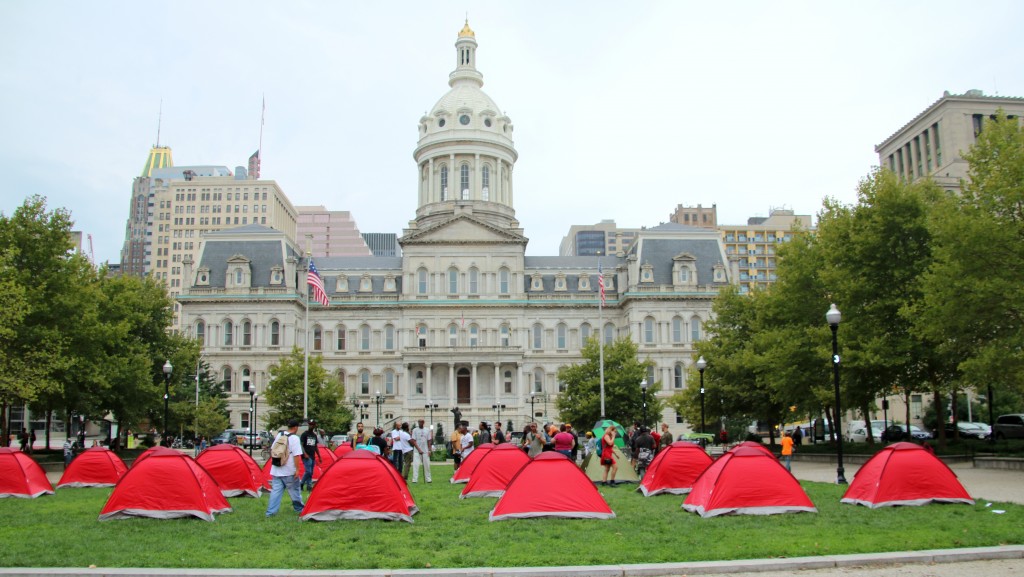 “Tent City” protest meant to send a message to Mayor Pugh about homelessness and other pressing issues in Baltimore. (Louis Krauss)

“She made all these promises and didn’t keep them,” he said. “She came to the shelters and a lot of the homeless people voted for her because of that.”

Abdul-Aziz said SCLC president Kenneth Gwee paid for the tents and wants the mayor to sign off on a Racial Equity Benefits Agreement that addresses economic issues, criminal justice and social justice.

“Taking down those monuments is good, that was right, but meanwhile it doesn’t help anybody get food and shelter,” he said.

Spokesman Anthony McCarthy said the mayor has “had several conversations with individuals, but she is open to a dialogue with protesters camping in the plaza.”

“We’re trying to get a better handle on the wide range of issues they are promoting,” he said.

Baltimore’s persistent homelessness problem was just one of the issues people in Baltimore were citing this week as the administration was collecting kudos for its decisive action on the four Confederate statues.

“I’ll celebrate removing statues when I see it mobilize the same folk to remove laws like this from our books,” tweeted Charly Carter, executive director at Maryland Working Families.

Carter linked to a story noting that state laws on the books allow landlords – including President Trump’s son-in-law-Jared Kushner – to use debt collection tactics that critics say amount to jailing people for being poor.

Others tried to call attention to the selection of a team to monitor the police reform consent decree the city has signed with the Department of Justice.

And many noted that on the same night the City Council called for the removal of the Confederate monuments, it also approved a mandatory one-year minimum sentence for carrying an illegal gun.

“Take down racist statutes along with racist statues,” the group Leaders of a Beautiful Struggle tweeted.

No Plan Yet on Homelessness

People can still be seen at all hours downtown, sleeping in doorways and below overpasses. According to the city’s most recent “Point in Time” report, there were 2,669 homeless people in Baltimore as of January 22, 2017.

After a rocky start – a homeless man found dead in front of City Hall, an encampment clearing that drew criticism – Pugh in April convened a workgroup on homelessness. Its report was to guide the administration’s strategy on homelessness.

But although Pugh mentioned to reporters about three weeks ago that she would be reading the report over the weekend, her office has made no mention of it since.

McCarthy said the mayor is reviewing the report and she “will be releasing a slew of recommendations to the public within the next two weeks.” 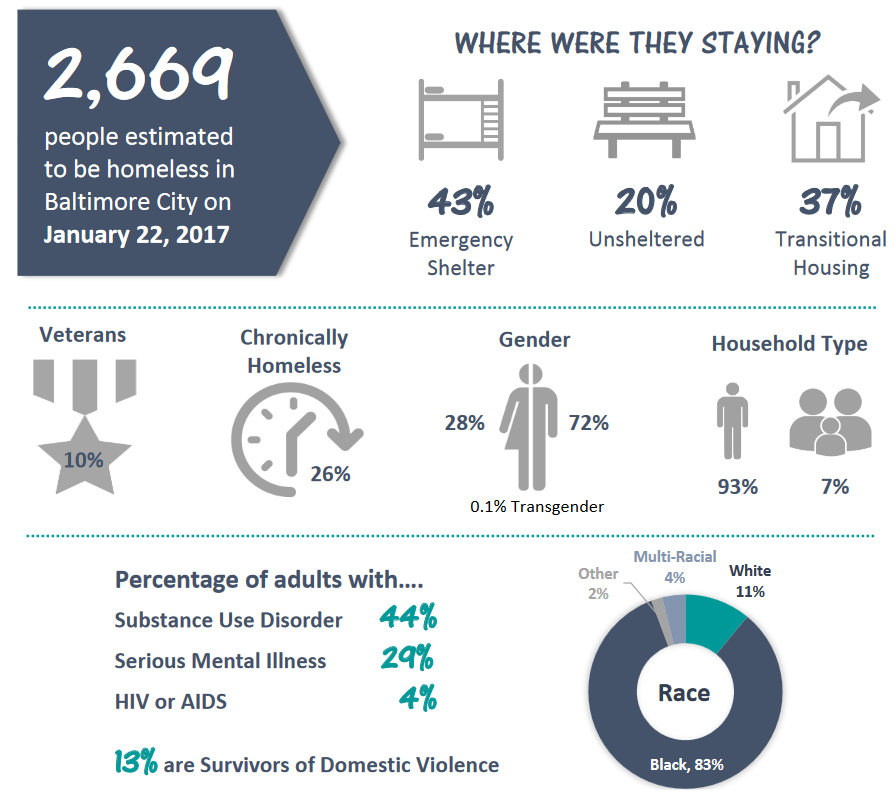 Data from the 2017 “Point in Time” survey for Baltimore. (Mayor’s Office of Human Services)

Meanwhile, the activists are camping out in front of her office, pushing their message, asking for more help getting permanent housing.

“People like me could use a housing voucher,” said Abdul-Aziz, who said he was injured on the job and that his $735 monthly benefit is not enough to cover the cost of rent and food.

Out in the Rain and Heat

Yesterday, many of the tents were still soggy from the heavy rain that pelted the city this week.

“We got wet, people got drenched, there were people in tents laying in puddles, but we’re still here!” said another organizer, Rob Moore.

Moore concluded, after meeting with Pugh, that the mayor “probably feels as though she is trying to answer our concerns” but still needs to be pressed.

“She is giving it effort, but our role as citizens is to hold her accountable,” he said.

On a blasting hot day, most of the tents were unoccupied, with just some bags of clothing or some bedding inside. Volunteers circulated through the grassy public space and staffed a table with donated water, food and toiletries. 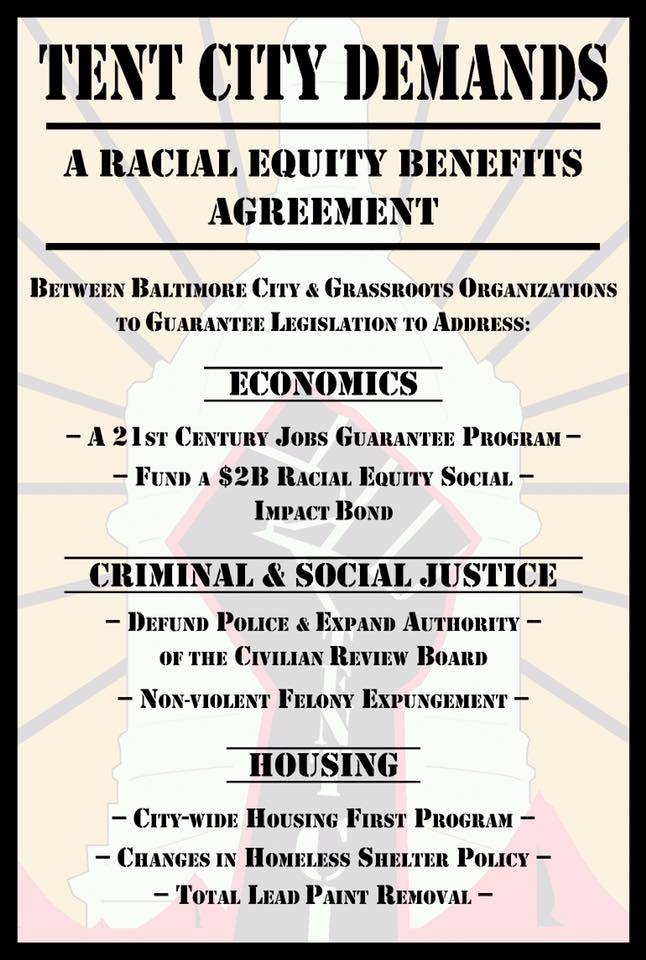 Moore said organizers have an online fundraising site (for “Tubman City,” as the encampment is also known) and have been trying to get a portable toilet and other needed supplies.

Asked when asked they think this occupation of what is, essentially, City Hall’s front lawn would end, Moore was upbeat.

“Until we get tired – but we’ve got a lot of positive energy,” Moore said. “We saw those statues coming down, that’s a win.”

“Our main goal is to bring awareness to the plight of what’s going on here in Baltimore,” he said. “Homelessness, violence reduction, economic justice, bringing light to that. Because these are the people of Baltimore out here.”