Summer is coming to a close for the youth of Baltimore, but there was something especially bittersweet for the hundreds of kids in neon-lit roller skates circling and zooming around the Shake and Bake Family Fun Center on Friday.

One of their favorite summertime sources of entertainment, the iconic skating rink and bowling alley at the corner of Pennsylvania Avenue and McMechen Street, was to be closed the next day for an indefinite period.

City officials said last week that the city-owned facility, where Anthony Williams Sr. has worked in various roles since the 1980s, needed repairs and a makeover and would be reopened (no date announced) to be run either by the Recreation and Parks Department or under a new management contract.

“I’ve been here 30 years, and to think that kids won’t have it as a place to go is terrible,” said Williams, whose contract to manage the facility expired last year but was allowed to continue by the city.

Williams spoke at a back-to-school backpack and school supply giveaway held on the facility’s last day as the sound of arcade games, skates clattering on the wooden rink and loud hip-hop tunes roared like a manic soundtrack in the arena behind him. 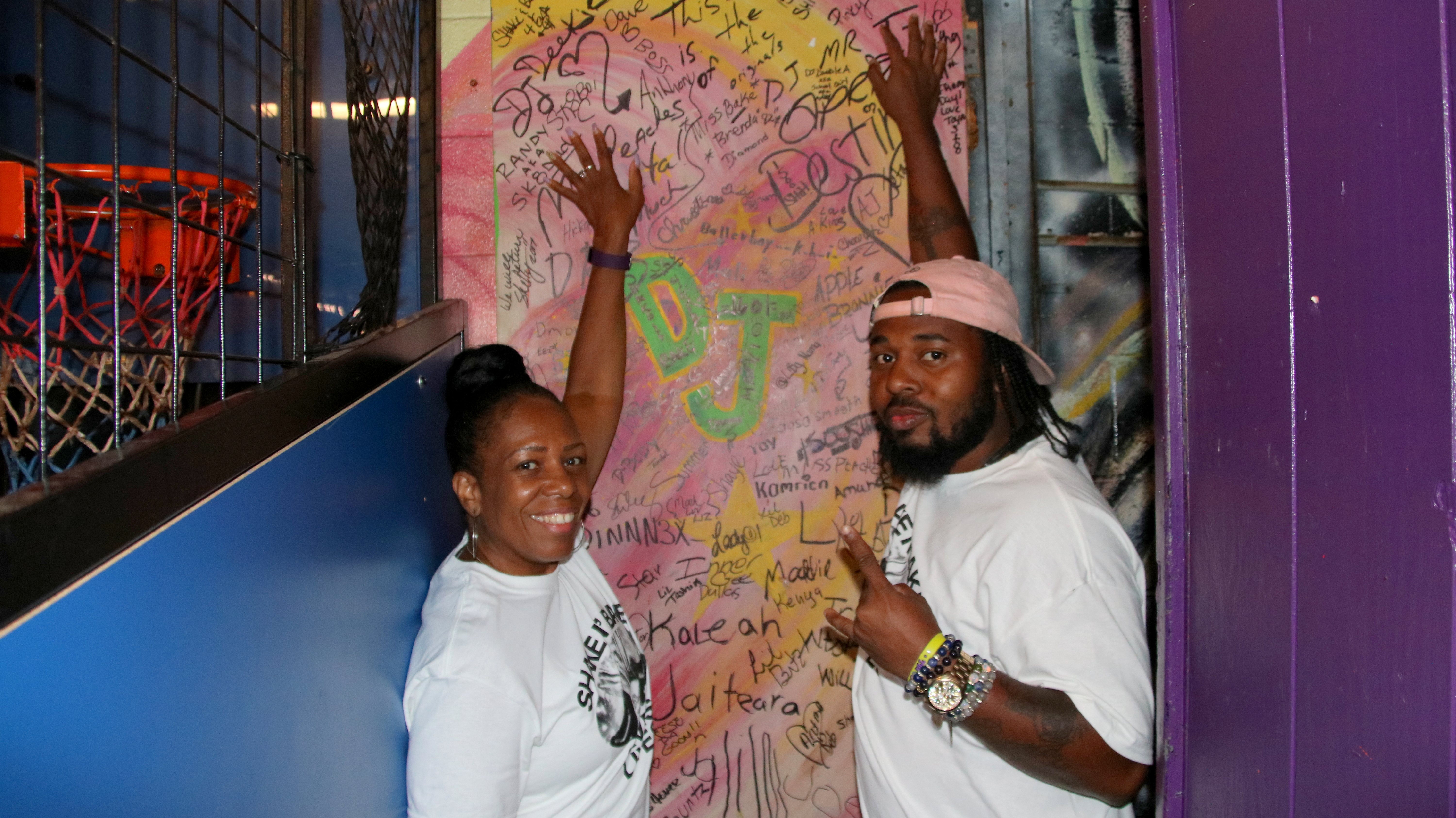 A hand-scrawled farewell to the Shake and Bake’s DJ. (Louis Krauss)

Williams said he is unsure whether Mayor Catherine Pugh is planning to bring him back as a manager when the facility reopens or how long renovations will take.

Pugh has said the roof and the skate center are in need of repair. Williams agreed, saying,  “It’s a few different things they have to fix, the roller skating rink, the roofs, some AC stuff.”

But shutting the center down, he said, is not necessary.

“I think it would’ve been very easy for them to keep some parts like the skating rink going while renovations were made,” Williams said.

Williams said Shake and Bake has for years filled a crucial role as a safe haven for Baltimore youth  – a place where parents could drop them off for an afternoon and know they would be okay.

Lines Around the Block

Kimora Smith, 9, didn’t realize it was the last day of operation for the skating rink and was not happy to hear the news.

“That’s sad they’re closing. This place is a lot of fun,” said Smith, who was there for the first time with her sister Kenya as part of a field trip during tennis camp.

Pausing on the edge of the rink to get a little break from the action, Smith acknowledged she had fallen a few times, but was starting to get the hang of it. (“So far only one person has pulled me down, so that’s good!”) 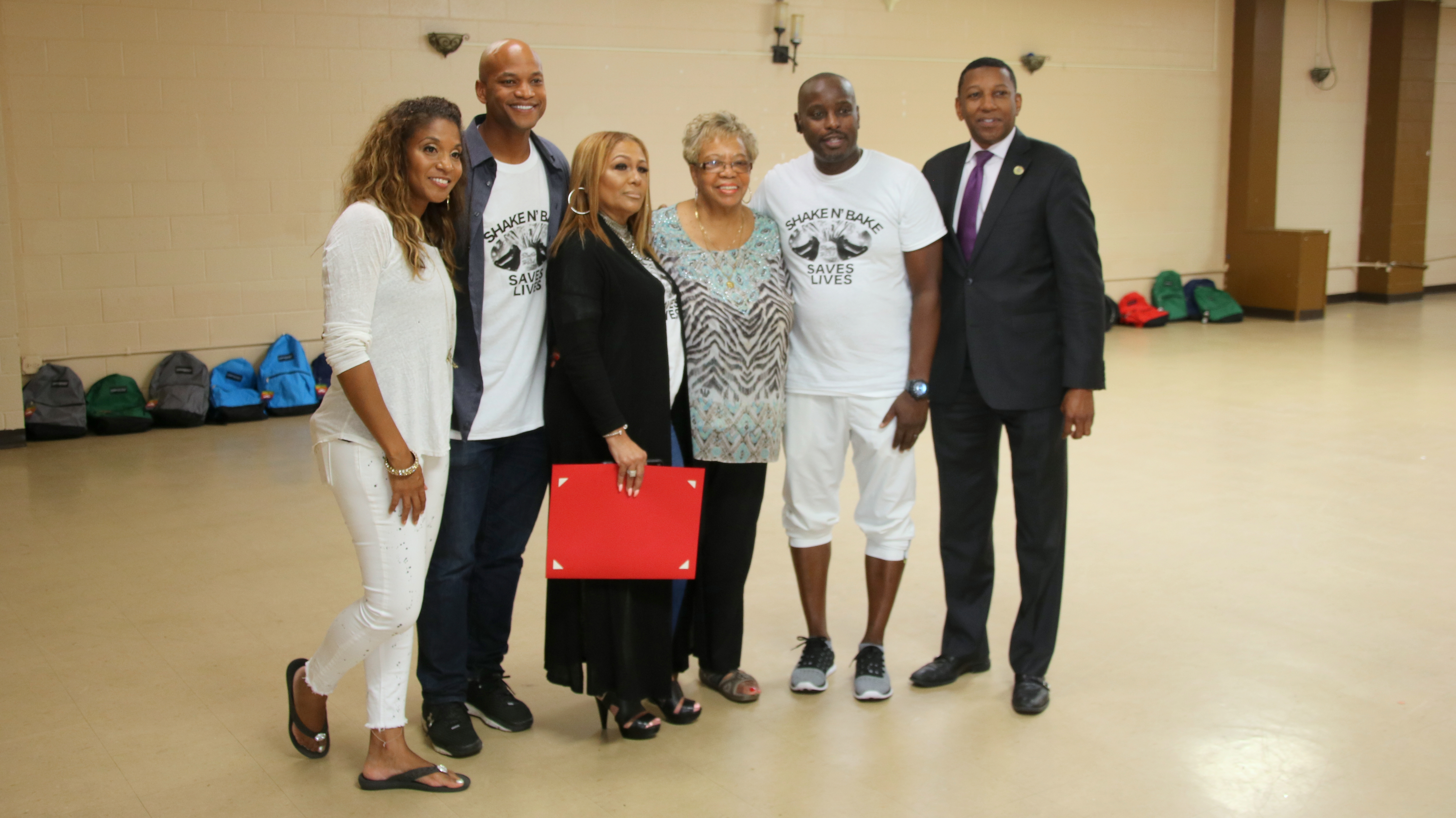 Author Wes Moore (second from left) and Anthony Williams (second from right) at the Shake and Bake’s final event on Friday. (Louis Krauss)

Outside, lines were stretched around the block, with hundreds of parents and children lining up for an event that combined skating with a free haircut station, public health information booths, and a school supply and backpack giveaway funded by author Wes Moore.

Moore said he visited the skating rink many times as a youngster and was devastated to hear it was closing.

“It’s one of the places so many of us like me came to feel safe,” he said. “I’m heartbroken that it’s going to be closed down, but thankful that the city has told us it will be temporary. We’re looking forward to the city making good on that promise.”

An online petition to show support for the center had 423 entries this morning and echoed Moore’s sentiments – with some commenters adding a harsher note:

“It would be truly sad to leave a historic landmark of the City to be consumed by neglect for lack of vision on the City’s part,” said “Travis J.,”calling for “strong plans . . . that are transparent and announced to the public” and naming Pugh and 11th District Councilman Eric T. Costello.

“Anything less will be met with protest, and, of course, unifying to elect an official that actually has a vision and the interest of the community at heart!” he wrote.

Lea Bailey, who owns Just Juice It at the Avenue Market, had come to the Shake and Bake’s final event with her kids.

She said she was fine with the closing as long as they open up quickly after repairs.

“My child is a little sad,” said Bailey, explaining that her daughter has worked at Shake and Bake in the summer.

“Anthony would take young kids under his wing and really works with them,” she said.

Her main question was what kids will do during its absence.

“They need to have a plan of what will be in its place until it reopens,” she said. “There’s nothing else for miles around that’s like this big, safe open area where you know you can leave your kids and nothing bad will happen to them.” 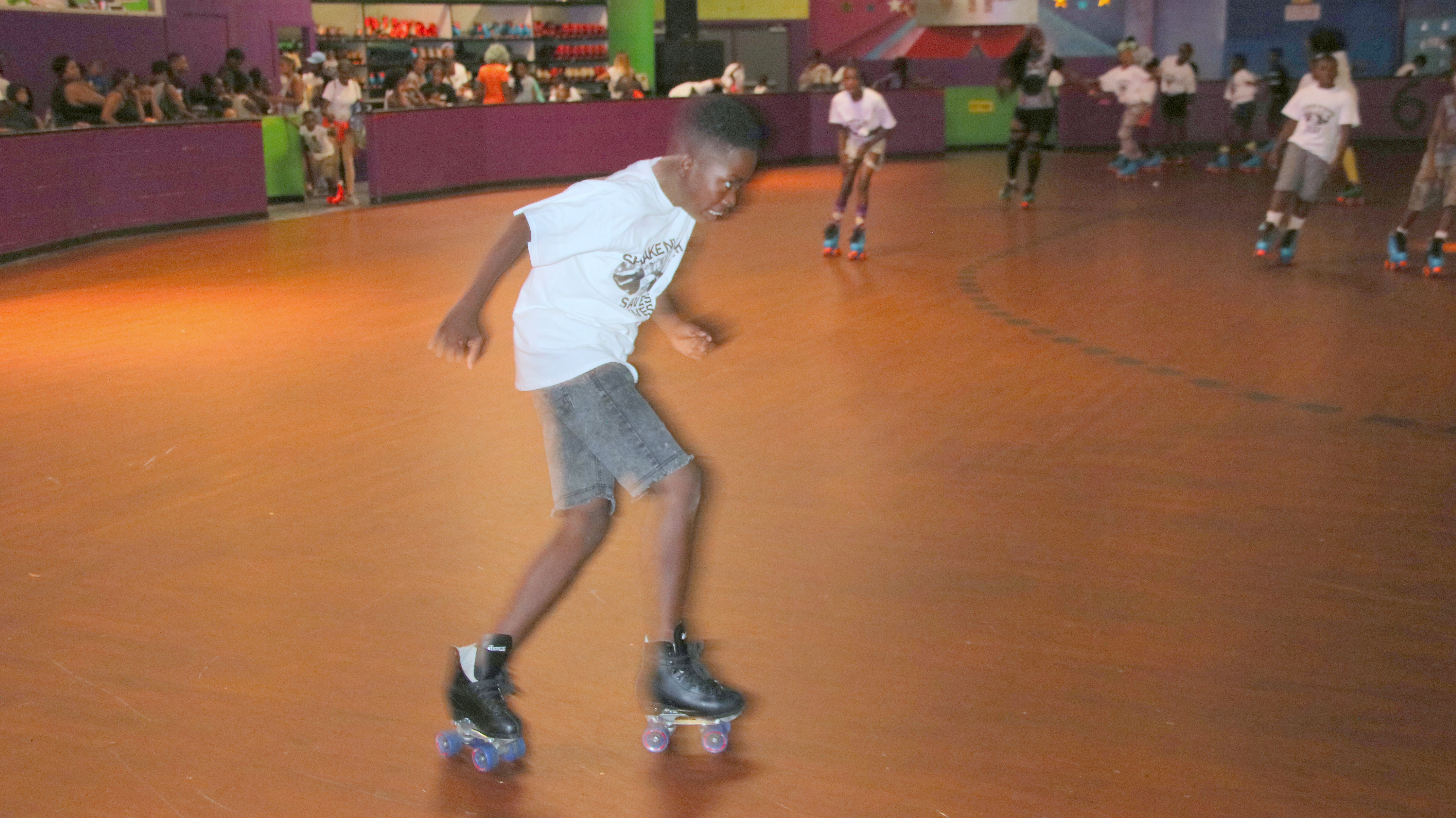 Skaters take their last spin at “The Bake” for what may be a long time. (Louis Krauss)