After a week of swirling rumors, Police Commissioner Kevin Davis confirmed late today that Detective Sean Suiter was killed one day before he was scheduled to testify before a federal grand jury about corruption in the Baltimore Police Department.

Davis was referring to the Gun Trace Task Force, whose seven members were indicted last March on charges of racketeering, robbing citizens, stealing from suspected drug dealers and committing overtime fraud. Four of the officers have pleaded guilty.

Since then, an eighth officer was indicted, and a ninth man, who now works for the Philadelphia Police Department, was indicted last week.

In addition to allegedly serving as a conduit for selling drugs, the Philadelphia officer was accused of threatening to harm the children of one of the Baltimore officers who pleaded guilty in the case.

In announcing the November 14 indictment of ex-Baltimore cop Eric Troy Snell, Acting U.S. Attorney for Maryland Stephen Schenning said in a press release that his office was expanding its investigation into police corruption.

Davis said this afternoon that he had just learned from Schenning that Detective Suiter was a witness in the federal investigation.

“Suiter was not a target of any ongoing criminal investigation,” Davis said he was told by Schenning and the FBI’s special agent for Baltimore. “There has been no information that has been communicated to me that Detective Suiter was anything other than a stellar detective, great friend, loving husband and dedicated father.”

Davis went on to say that there was also no evidence that Suiter’s murder was in any way connected to his pending grand jury testimony.

According to Davis, Suiter was investigating a prior triple homicide on the 900 block of Bennett Place last Wednesday, when he and his partner saw suspicious behavior by a man.

“No Conspiracy” to Silence Suiter

Suiter approached the man, a brief struggle ensued and Suiter was shot once in the head, Davis said.

Upon hearing the gunfire, Suiter’s partner “sought cover across the street and he immediately called 911,” Davis said.

(The partner, it was earlier reported, did not have his dispatch radio, so he called 911 from his cell phone. Suiter, meanwhile, was found with his radio clasped in his hand.)

“This incident,” Davis continued, reading from a prepared statement, “appears to be nothing more than a spontaneous observation of a man behaving suspiciously and a spontaneous decision to investigate his conduct” and is not “part of any conspiracy” to silence the detective.

The partner told police that the shooter fled down an alley that leads to Schroeder Street and also to Fremont Avenue.

Despite a week-long period during which police swarmed across the neighborhood and locked down the immediate blocks around Bennett Place, no arrests have been made.

Even with an award of $215,000 promised for information about the case, no suspect has been found, Davis acknowledged this afternoon.

“It certainly makes for a great theory,” Davis said, responding to a reporter’s question about “the coincidence” of the shooting on the eve of Suiter’s grand jury testimony and chatter on social media that he was killed by friendly fire.

“Here we have a police officer who was shot and killed and we don’t have a really good description and we don’t have someone in custody, and, lo and behold, I find out the fact that he was scheduled to testify before a federal grand jury.

“I understand the speculation that exists,” Davis continued, “but it is our responsibility to follow the evidence.” 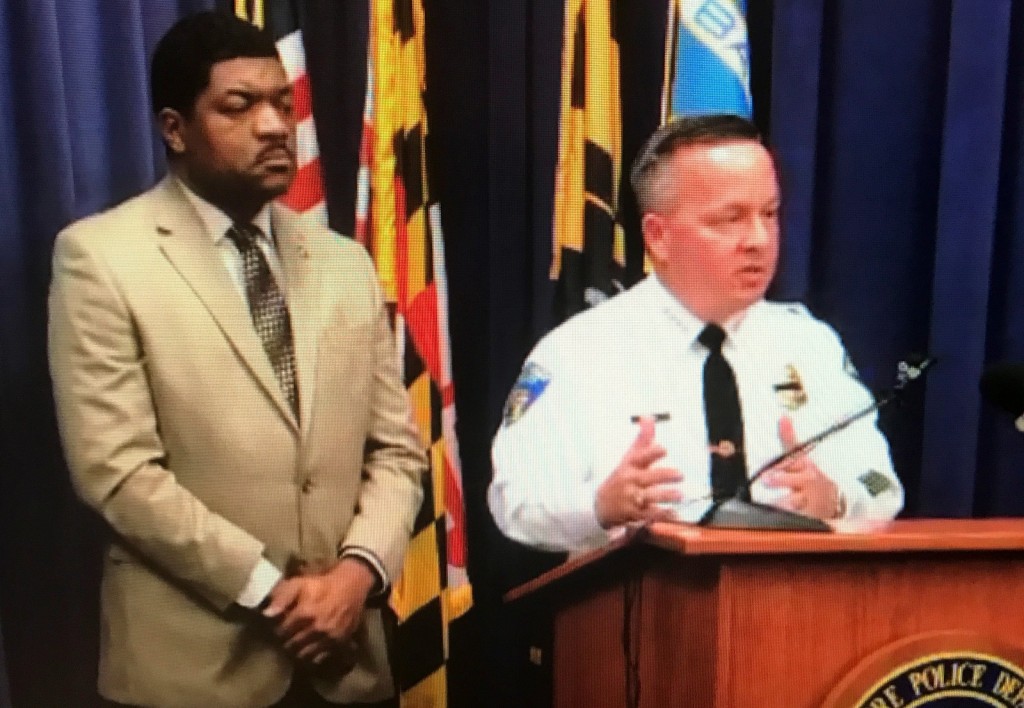 Responding to a reporter’s observation that Suiter had entered into the police database his plans to visit Bennett Place on the day of the shooting, Davis said homicide detectives routinely do field work.

“Detective Suiter was the lead detective of a triple murder [on Bennett Place] in 2016, and his partner investigated a murder in that immediate area recently as well. For them to be in that area investigating a follow-up on a murder is something completely normal and routine,” he said.

“I understand the speculation that exists, but it is our responsibility to follow the evidence.”  – Kevin Davis

“To put it another way,” added T.J. Smith, the BPD spokesman who shared the podium with Davis, “this wasn’t somebody who had snuck up on him. . . This wasn’t a scenario where ‘I’m meeting with this person, wait here and I’m going to walk there.’ This was some observations by these two detectives who saw something.”

Davis said he had no idea whether further indictments of Baltimore police officers are expected from the grand jury.